Droughts in Northern Kenya: the concrete impacts of the climate change.

In northern Kenya, the cycle of droughts is intensifying, with dramatic consequences for pastoral populations, among the first victims of climate change in Kenya.

In the arid plains of Isiolo County, the short rainy season is long overdue. Around Merti, a town 500 kilometers north of Nairobi, the local economy is mainly based on raising and selling milk from cows and goats. For its population, predominantly Borana – a subgroup of the Oromo ethnic group found in neighboring Ethiopia – this period of intense drought severely impacted its pastoral activity, making grazing areas scarce and access to water more and more uncertain. Goats and cows no longer give milk, and the price of livestock keeps falling, both because of the low meat content and the risk associated with buying livestock in times of drought. The scarcity of grazing places is also a source of increased tensions between semi-nomadic peoples, for whom the few grazing places are an oasis in the middle of the desert.

Paradoxically, in addition to the drought, the intense rains in the watershed of the Ewaso Ng’iro river raise fears that its bed will overflow and cause flooding. This unpredictable element is a further threat to pastoralists living near the shores of one of the rare – often dry – inlets that cross the arid plains of northern Kenya.

Isiolo, the capital of the province of the same name, does not know the drought. Located a few dozen kilometers north of Mount Kenya, this town, with a semi-arid climate, is a crossroads where breeders and buyers trade. From here, milk and livestock from remote areas of the region are sent to Nairobi, the Kenyan capital. Since the onset of the drought, the milk production of camels in the city center dairy has halved, while the price of cattle, which are traded every Monday and Friday at the market, has also dropped drastically. Thus, affecting the viability of the pastoral sector as a whole.

In this remote region of Kenya, the intensification of droughts due to climate change provides a local overview of its direct and indirect consequences for a population with ancestral practices and a very limited carbon footprint. 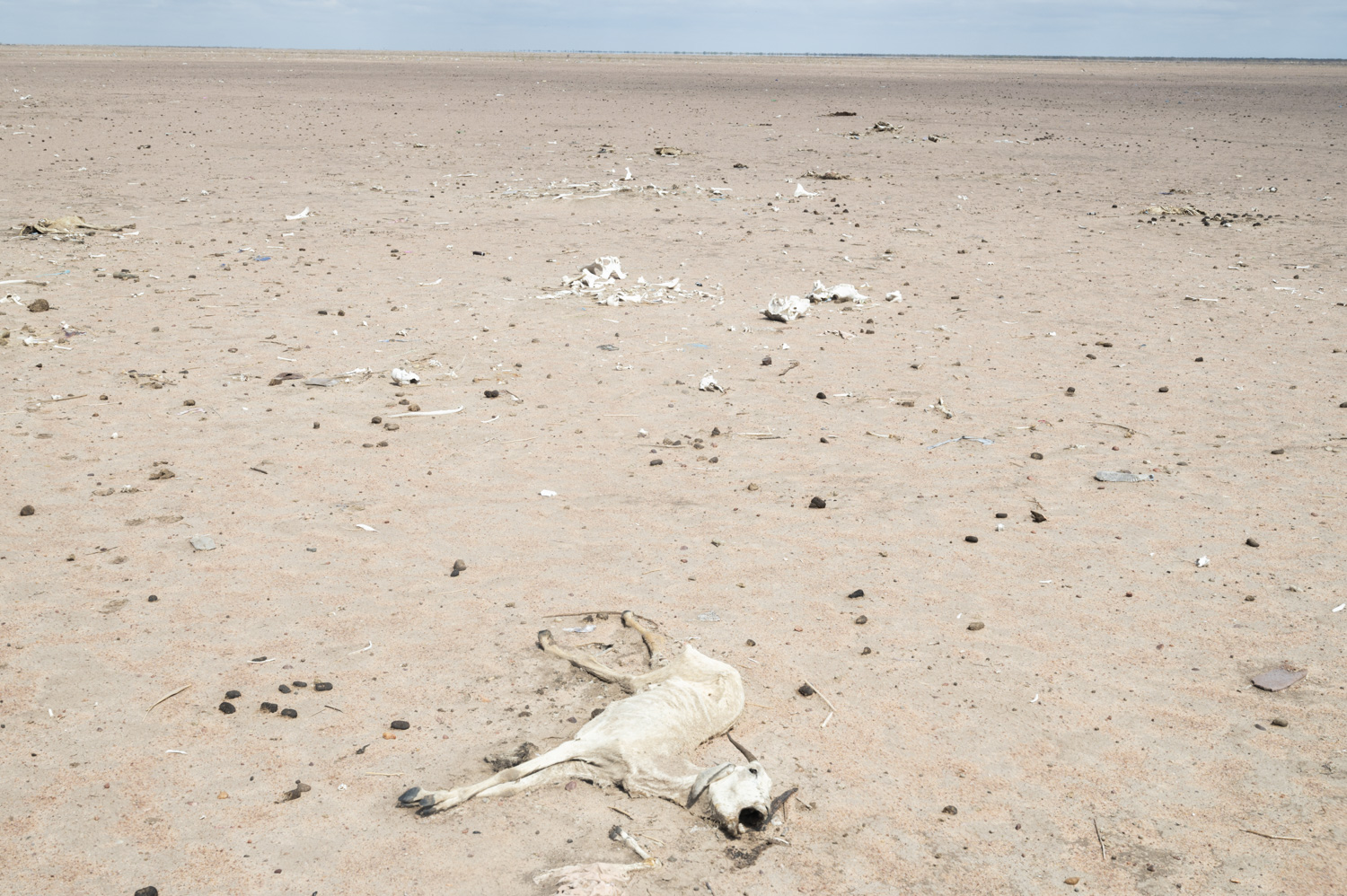 KENYA, Malkagalla, On the edge of the village of Malkagalla, the carcasses of goats and other cattle litter the ground. Here, droughts have impacted all pastoralists. 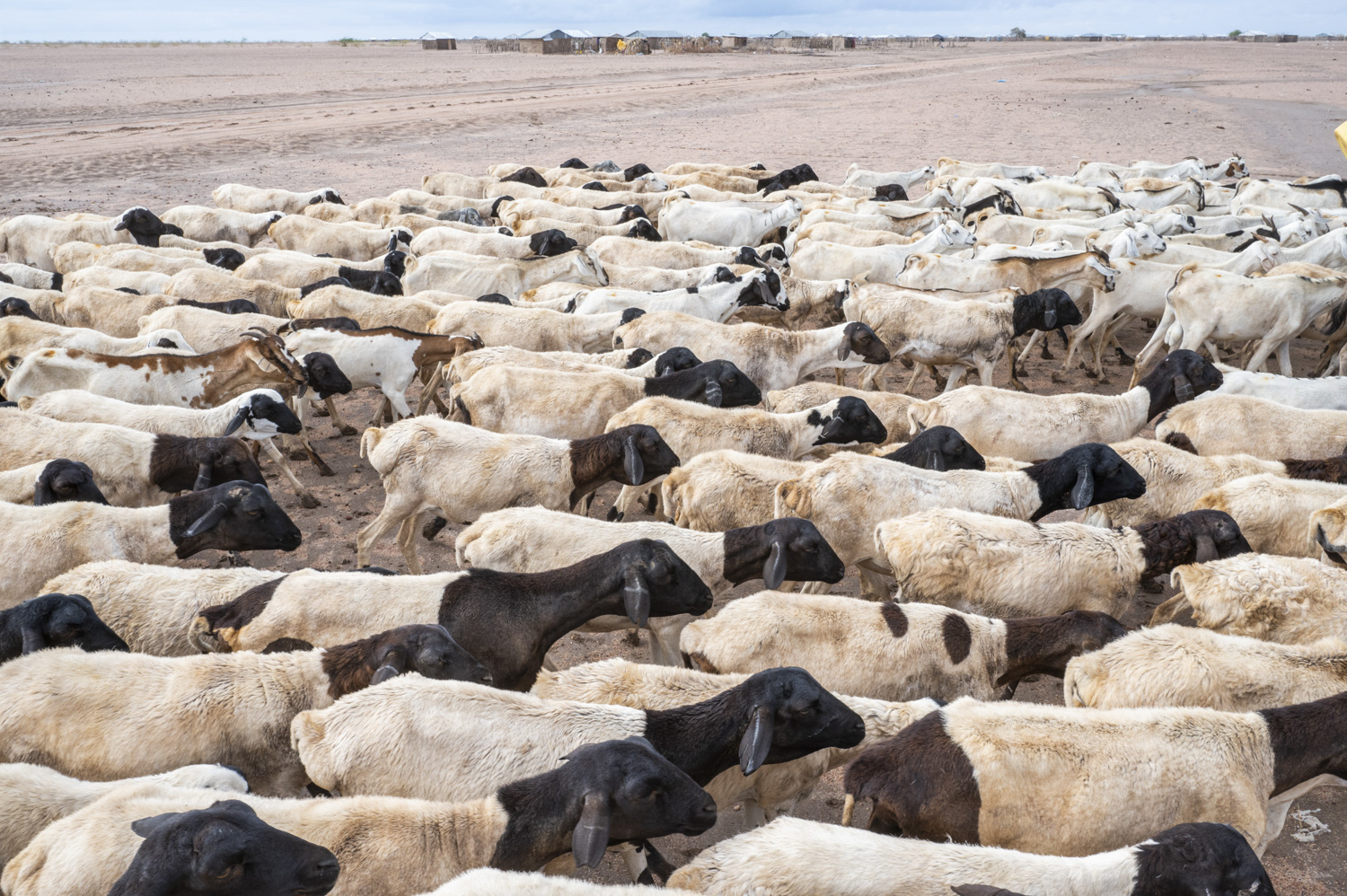 KENYA, Malkagalla, A herd of goats is migrating in search of pasture and water points. A few days ago, for the first time in almost a year, heavy rain sprayed the dry soils of the Malkagalla region. However, it takes continuous rain for eight days for the grass to grow back and the water tables to refill. 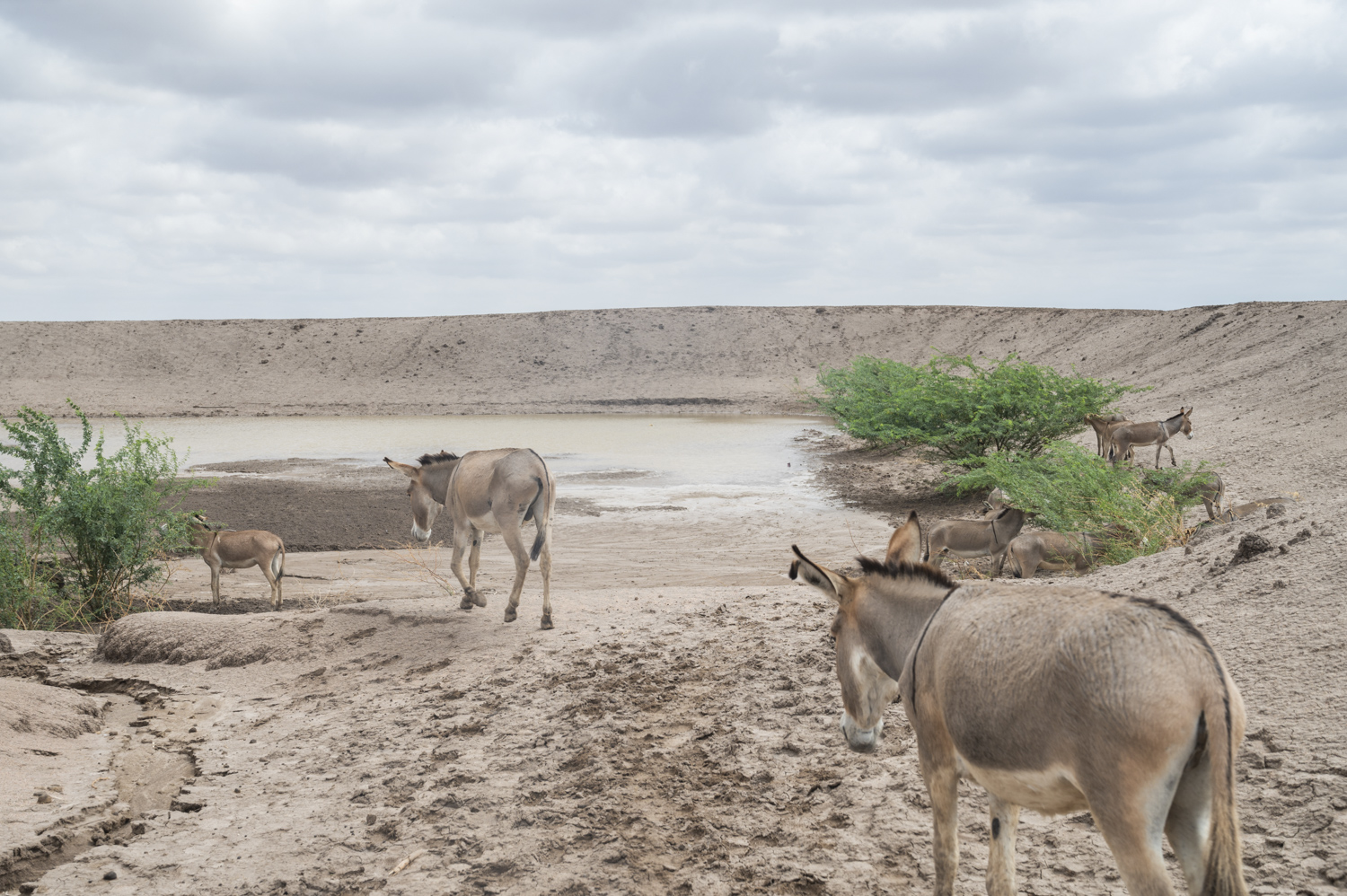 KENYA, Malkagalla, Donkeys come to drink in a reservoir created a few kilometers from Markagalla in order to contain the water of the rainy season and thus water the cattle. However, it would take more than eight consecutive rainy days for the reservoir to fill up. 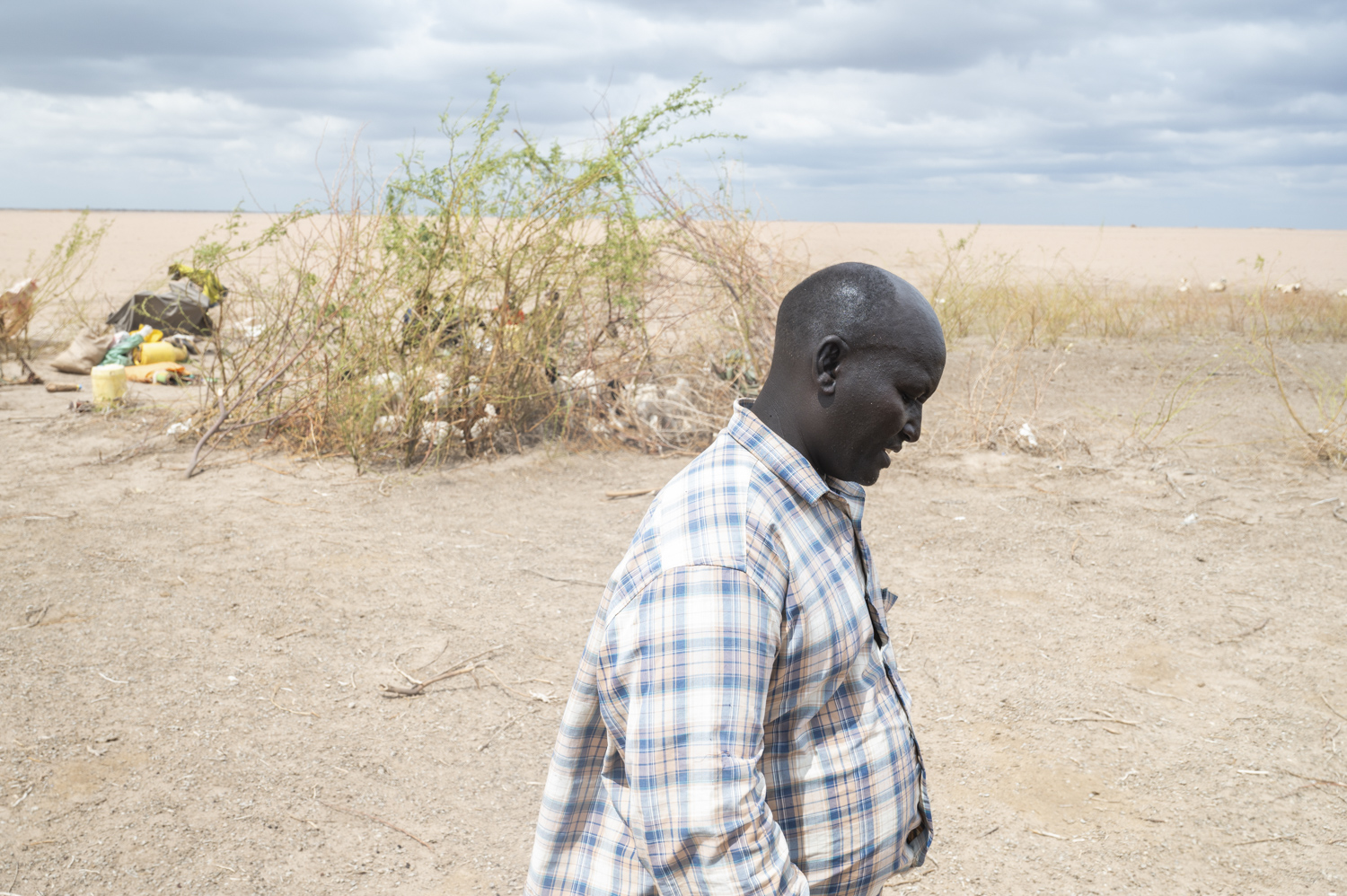 KENYA, Malkagalla, Mohamed Wako migrates with his herd of 150 heads, accompanied by his four children. Warned of the heavy rains upstream of the Ewaso Ng iro river, he wanted to protect his herd from the risk of flooding. Behind him, the kids are placed under branches to protect them from the sun. 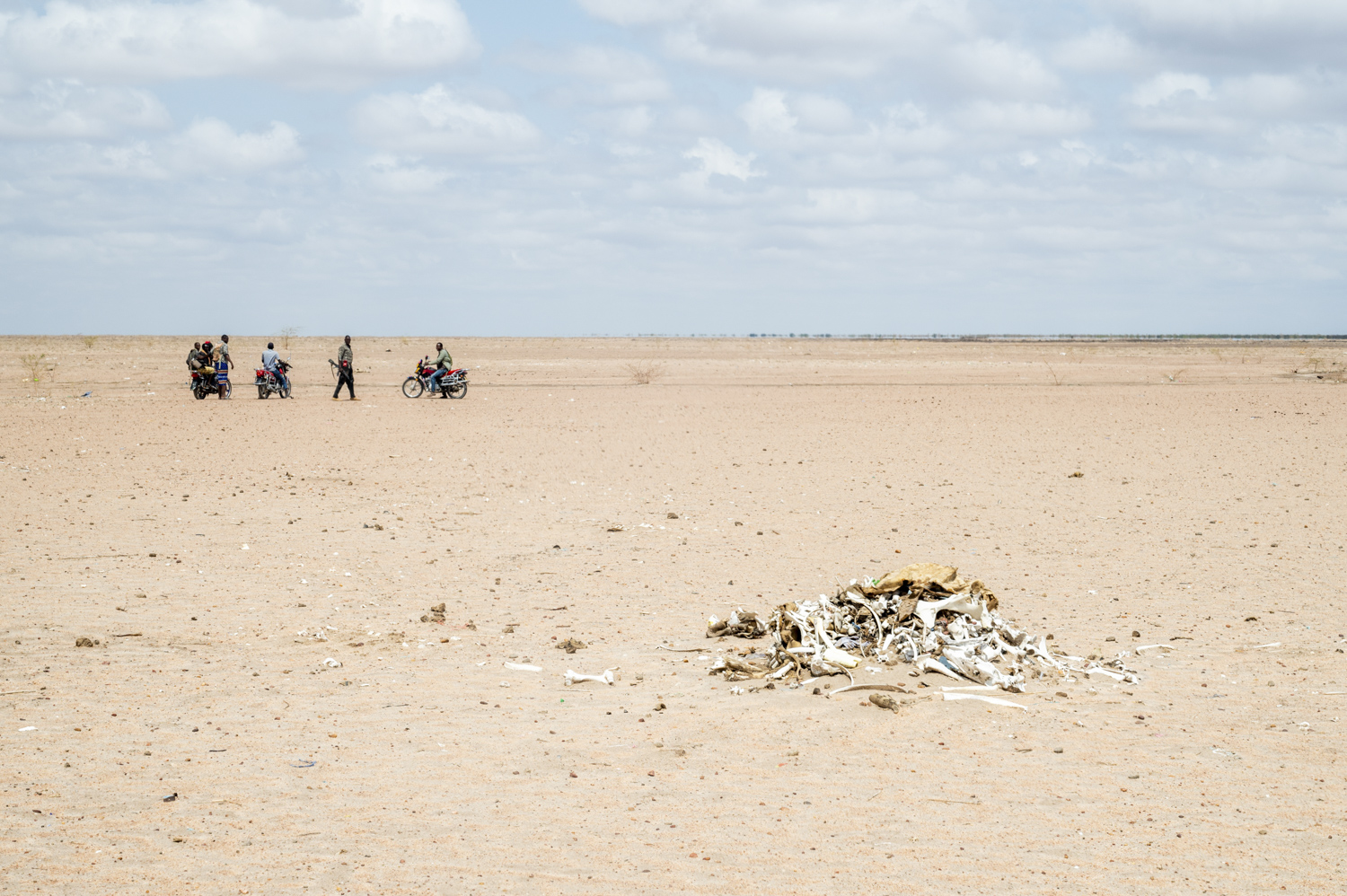 KENYA, Malkagalla, A pile of animal bone carcasses, and in the distance, a group of vigilantes, carrying weapons, roaming the Borana lands to protect herders from cattle thieves. 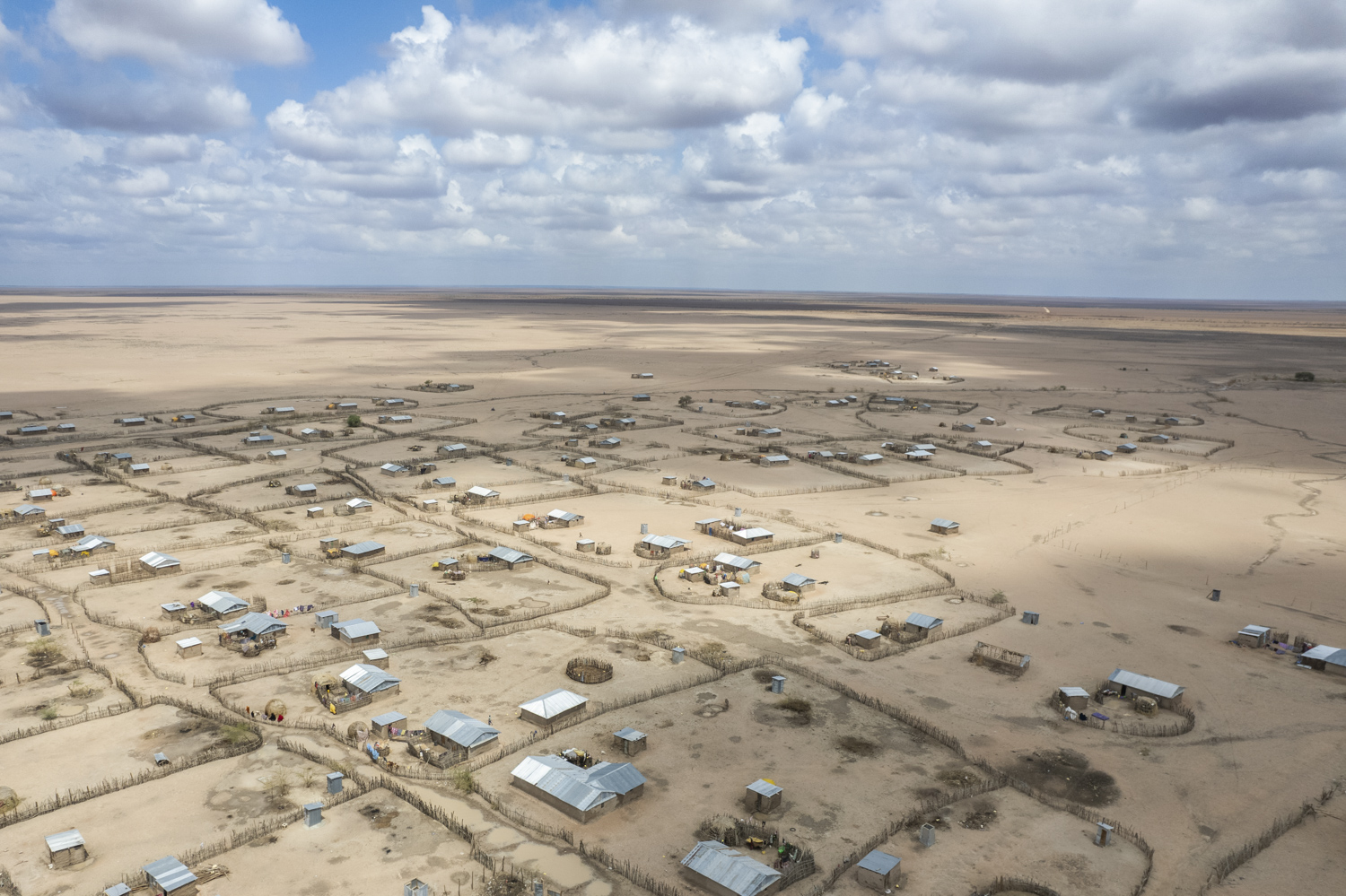 KENYA, Malkagalla, Aerial view of the village of Markagalla, which serves as a base for many semi-nomadic herders who operate in the region. 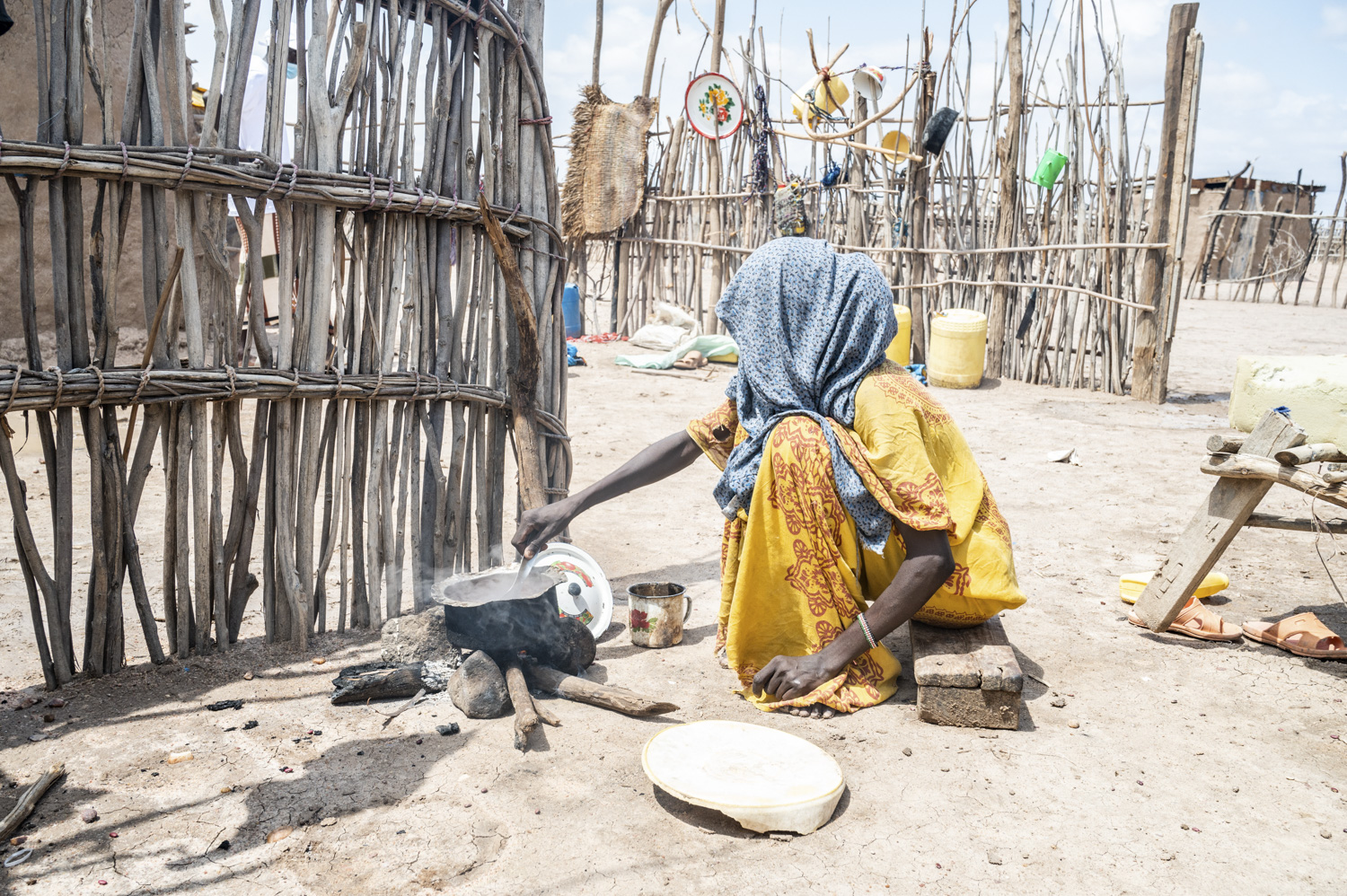 KENYA, Malkagalla, Fatuma, 27, cooks beans given to her as part of an emergency food program set up by an international NGO to deal with food insecurity caused by the drought. Fatuma and her husband Mohamed are among the vulnerable families in the village. In 2014, Mohamed lost his herd during a previous drought, and now he works as a day laborer in the village. 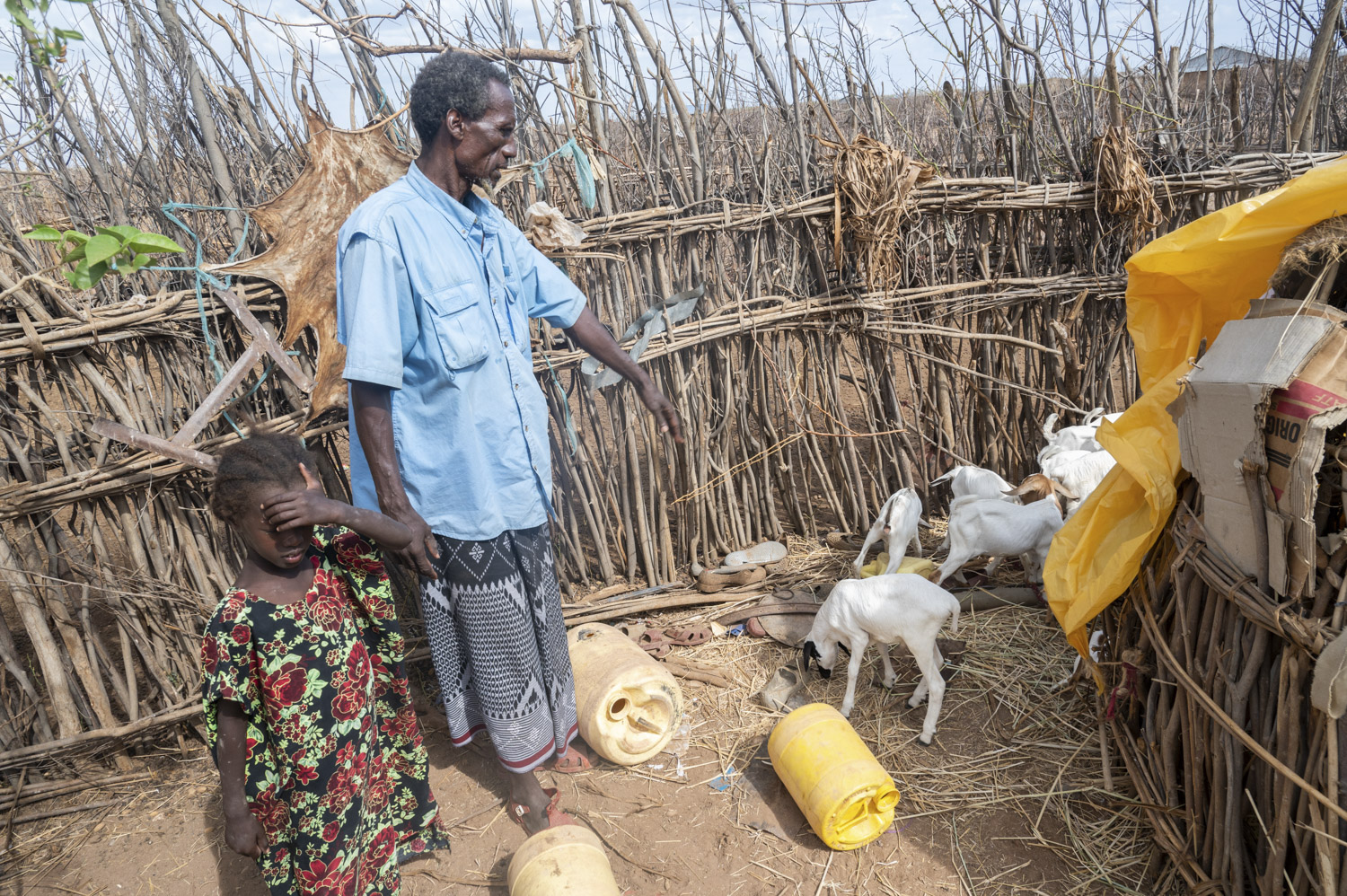 KENYA, Mata Arba, Adan Fayo works to keep his herd of 50 goats and 2 cows alive. He lost one cow and three goats. Before, the rainy season started in October, and now it starts timidly in November. The last normal rainy season dates from 2019. 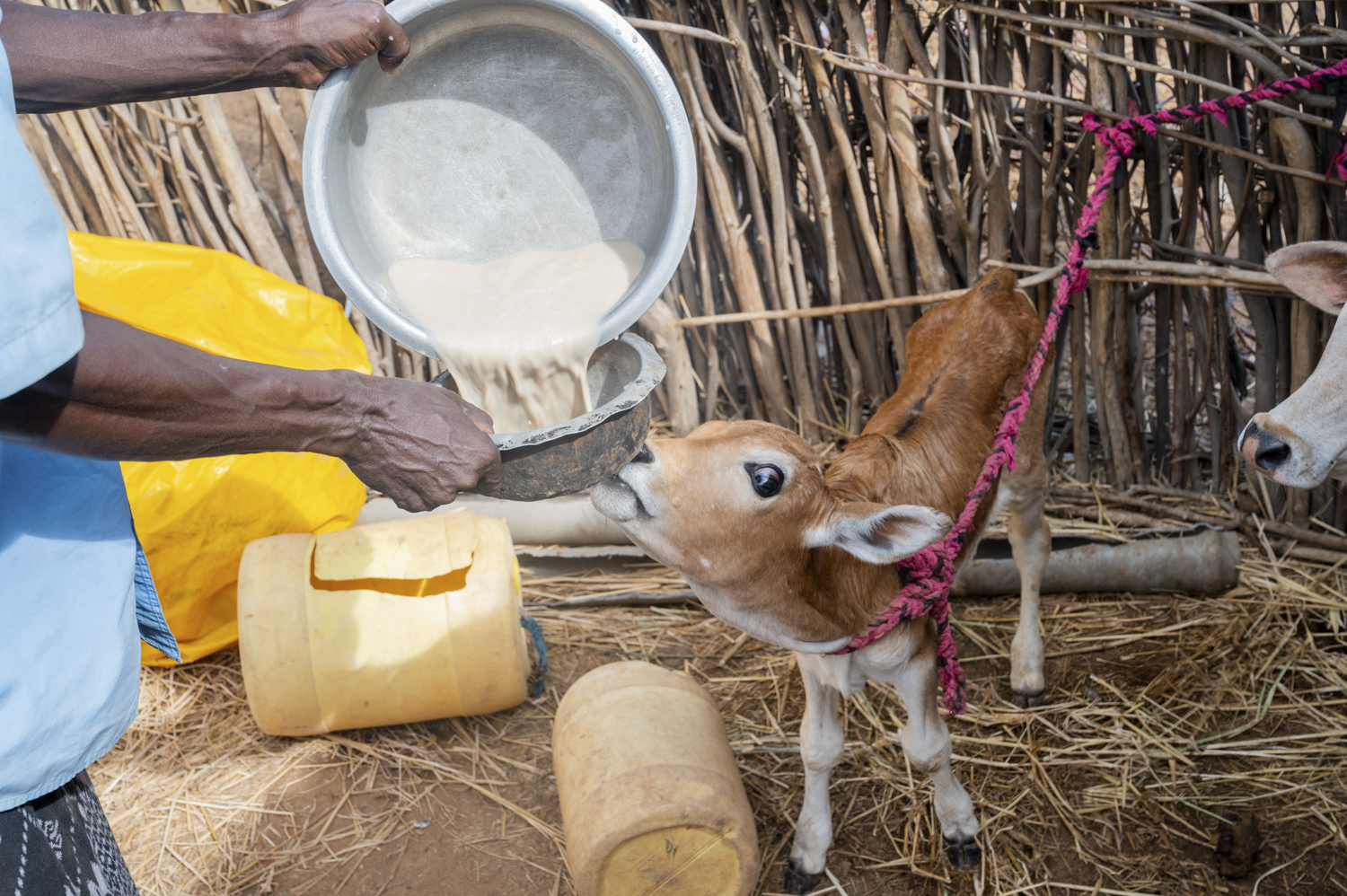 KENYA, Mata Arba, Adan Fayo gives tea prepared by his wife, Zeinab, to his calves, because their mother no longer gives milk. The milk used to make the tea was given to her as part of an emergency food program. Previously, Adan was engaged in other activities, such as farming by the Ewaso Ng iro river, however, the Prosopis juliflora, a tree introduced by an NGO to combat desertification, behaves in an invasive manner and colonizes the fertile banks of the river.

KENYA, Mata Arba, Entire territories are colonized by the invasive Prosopis juliflora tree, forcing residents to sometimes relocate their homes. This problem is added to the drought and the floods. 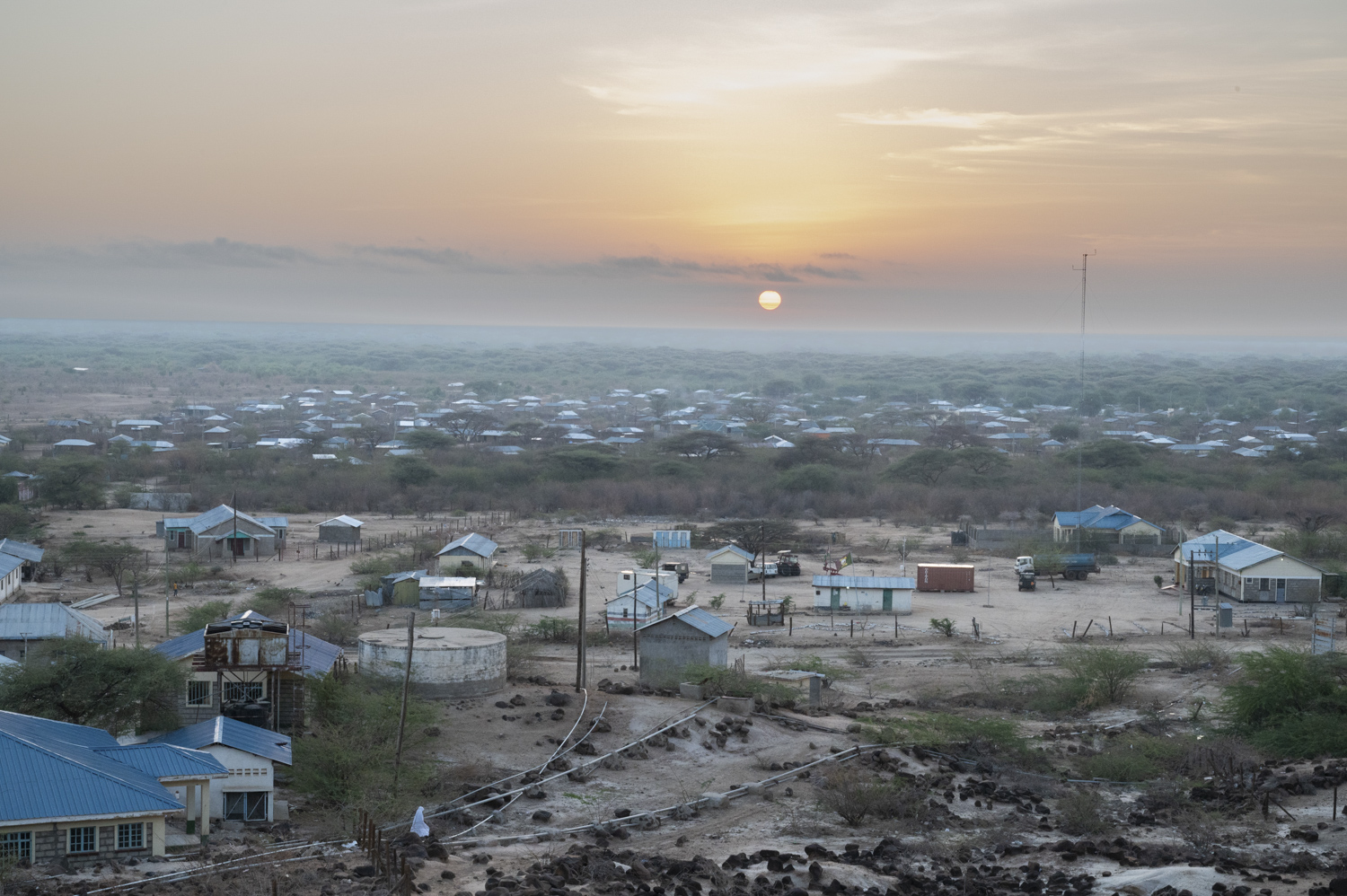 KENYA, Merti, The village of Merti has several thousand inhabitants, and is a hotspot in the north of Isiolo County. Previously, many traders would come by trucks to buy cattle and milk for resale in the town of Isiolo. With the drought, the entire local economy is affected. 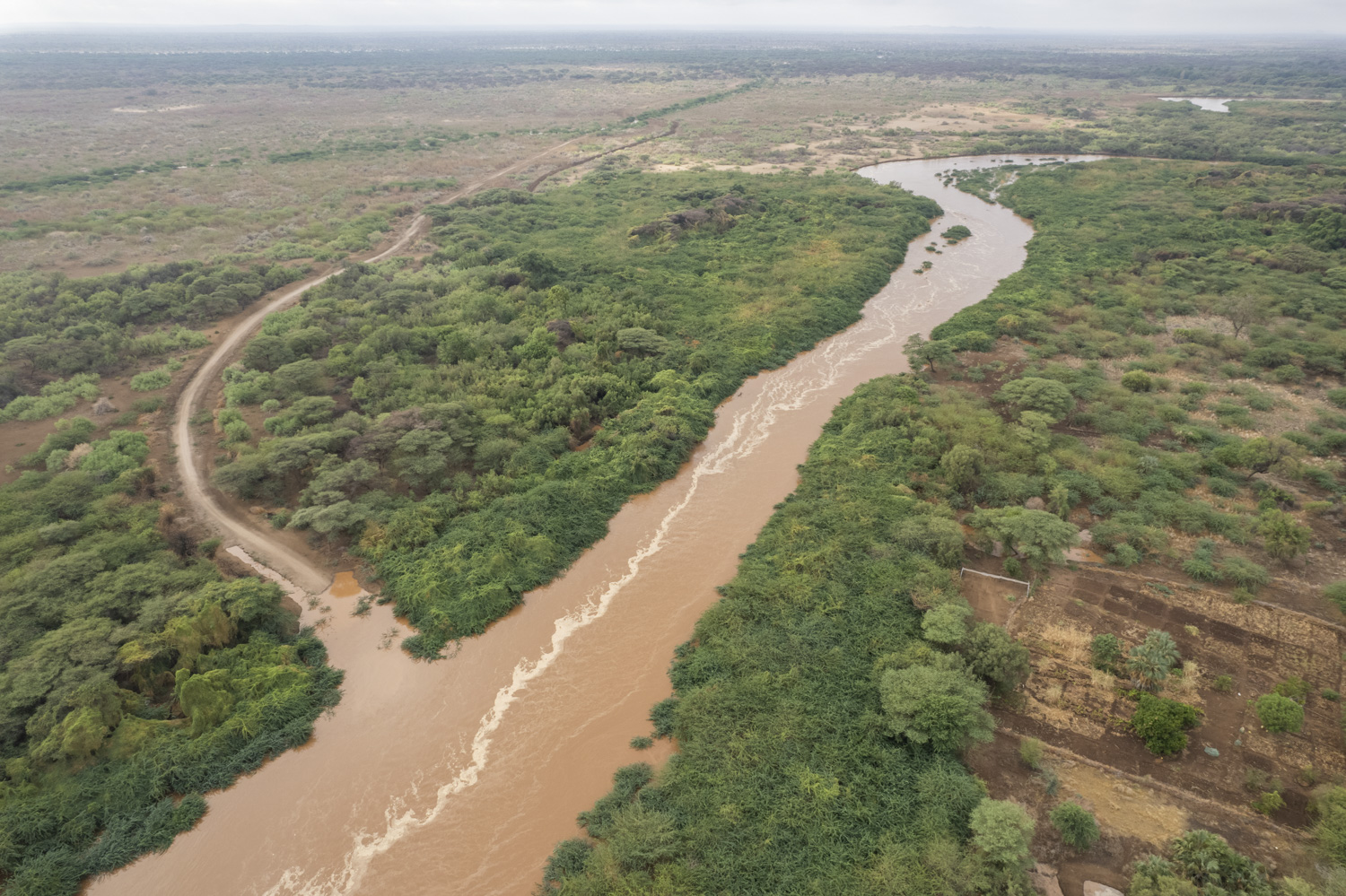 KENYA, Merti, Aerial view of the Ewaso Ng iro river, which for several days, has had an intense flow of water it collected in its watershed, located around Mount Kenya more than 200 kilometers away. Before that, the river had been dried for several months. On the banks, the dense bushes are composed of Prosopis juliflora, an invasive tree that reduces fertile areas. 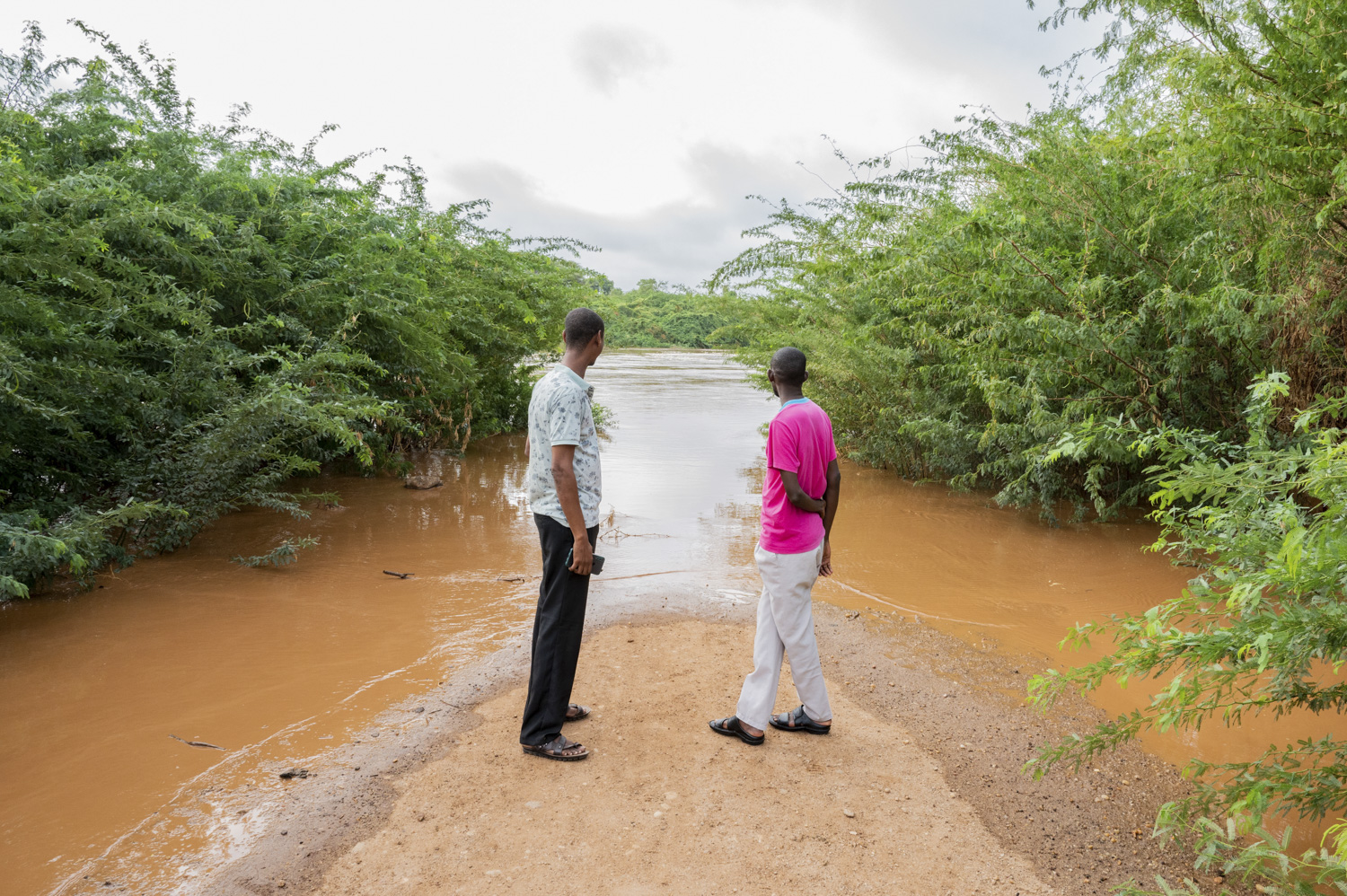 KENYA, Merti, Salad and Ibrahim, from the NGO MID-P Kenya (Merti Integrated Development Program) note the increase in the level of the Ewaso Ng iro river. This organization operates in the most remote areas to assess the impact of droughts on the affected population. 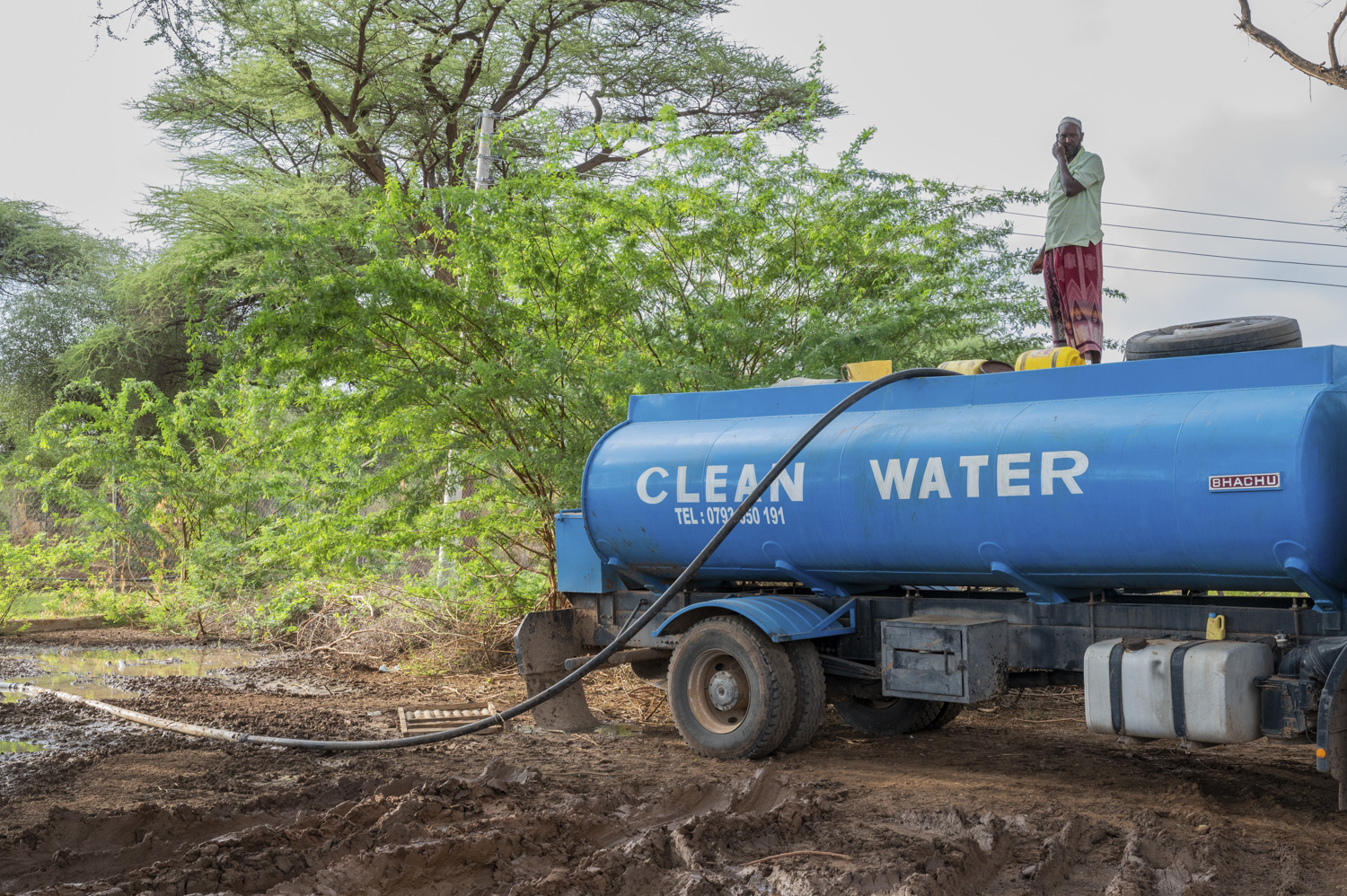 KENYA, Merti, A tanker truck is full near the Ewaso Ng iro river. This 10,000 Liters cistern is intended for the village of Lakole, located 20 kilometers from Merti. The delivery price is 30,000 Ksh (300 USD), but the government subsidizes up to 15,000 Ksh (150 USD). The tanker truck is one of the means implemented by the Kenyan government to fight against the immediate effects of the drought on the populations. 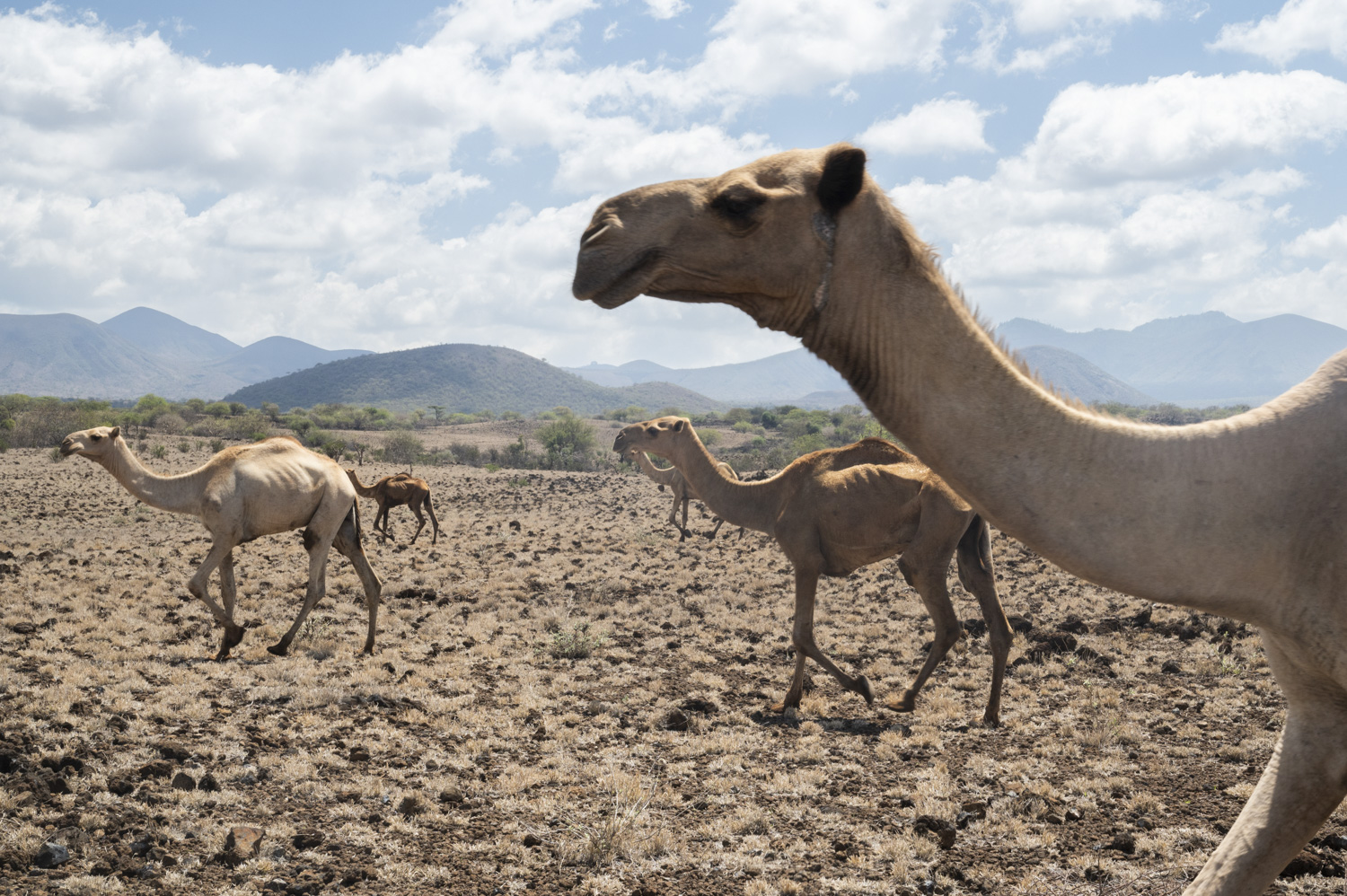 KENYA, Merti, A herd of camels migrate near the dirt road that connects Merti to Isiolo. Camels withstood the impacts of drought much better than cows and goats. 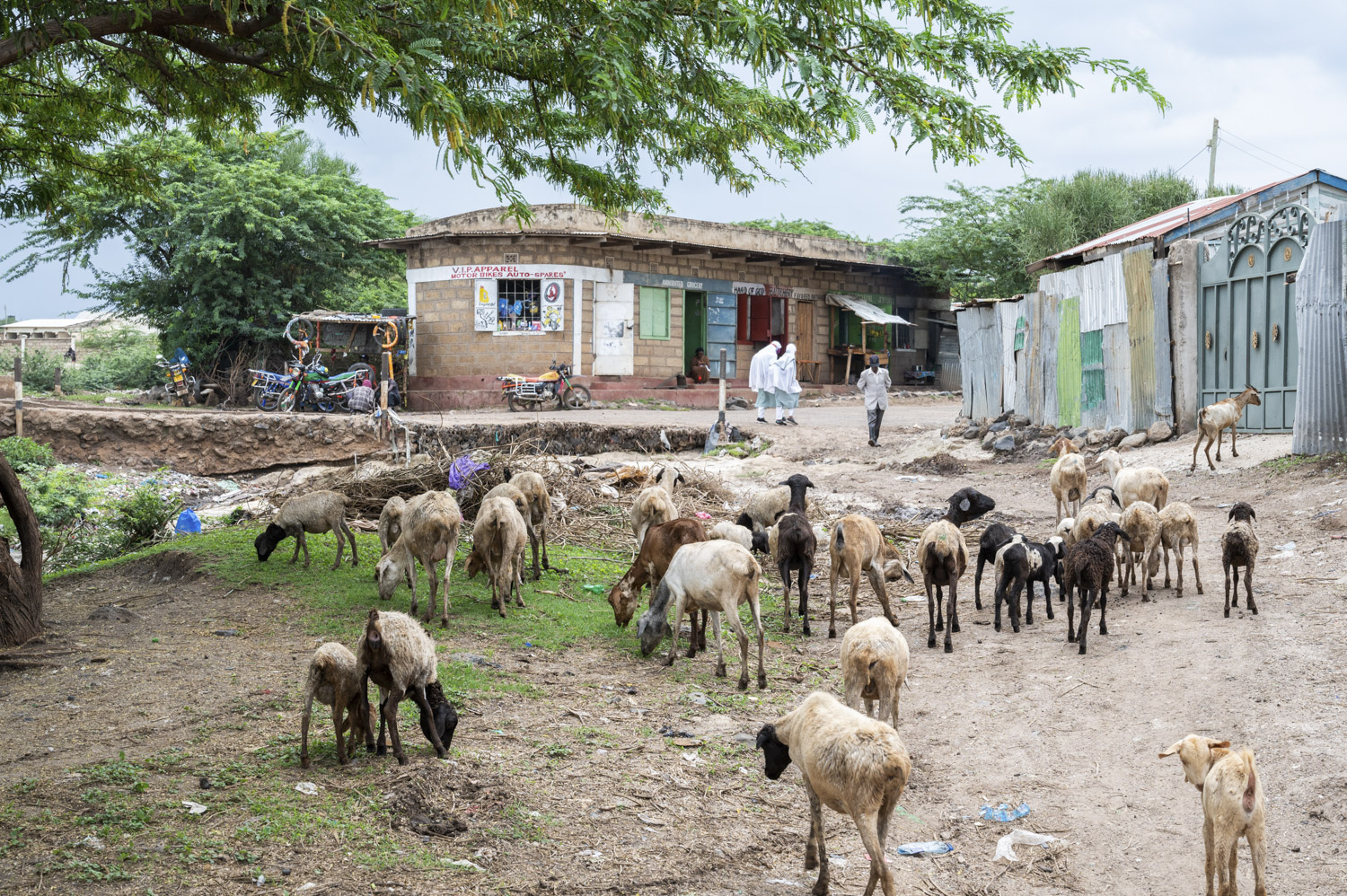 KENYA, Isiolo, In the center of Isiolo, a herd of goats graze. Isiolo, a town of a few tens of thousands inhabitants, is a hotspot for the milk and livestock trade. This is the link between herders and buyers for Nairobi. 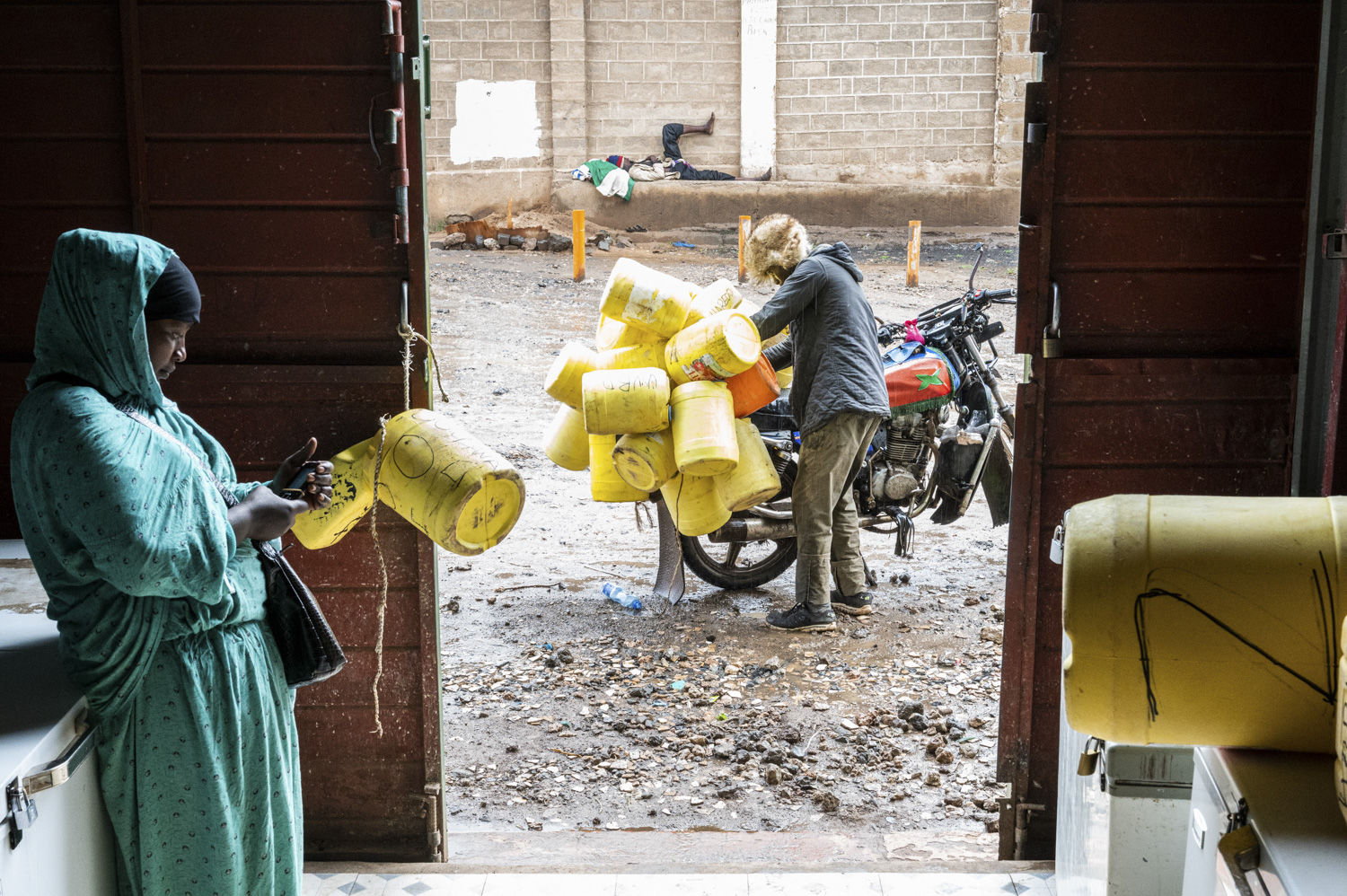 KENYA, Isiolo, A woman has just delivered the camel milk she collected earlier in the morning to the “Anolei Women cooperative”, located in the center of Isiolo. Behind her, a delivery boy is about to bring back the empty milk cans. 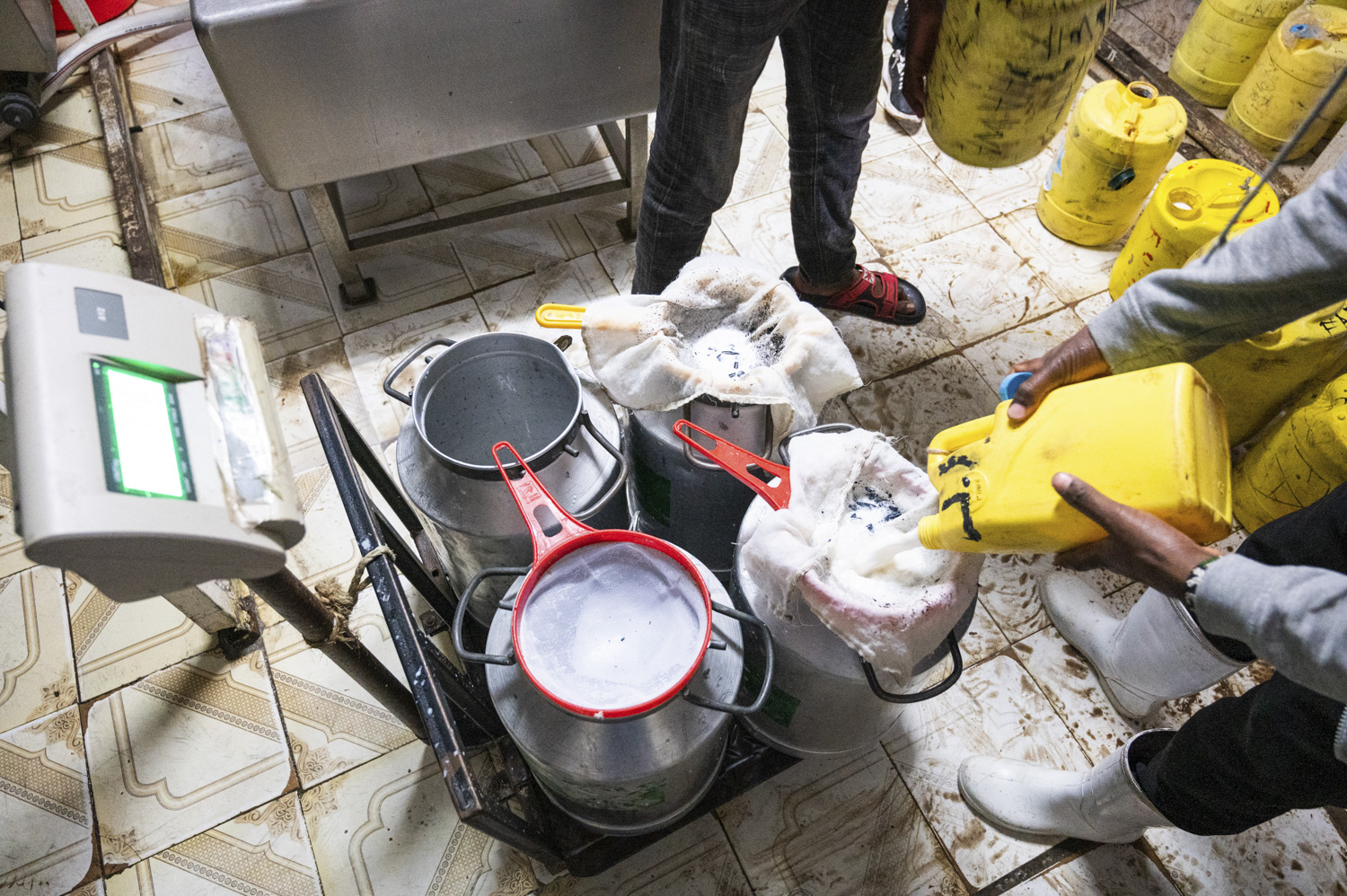 KENYA, Isiolo, Each woman s production is recorded and tanked before being exported to Nairobi. Small pieces of charcoal are put in the milk to preserve it. 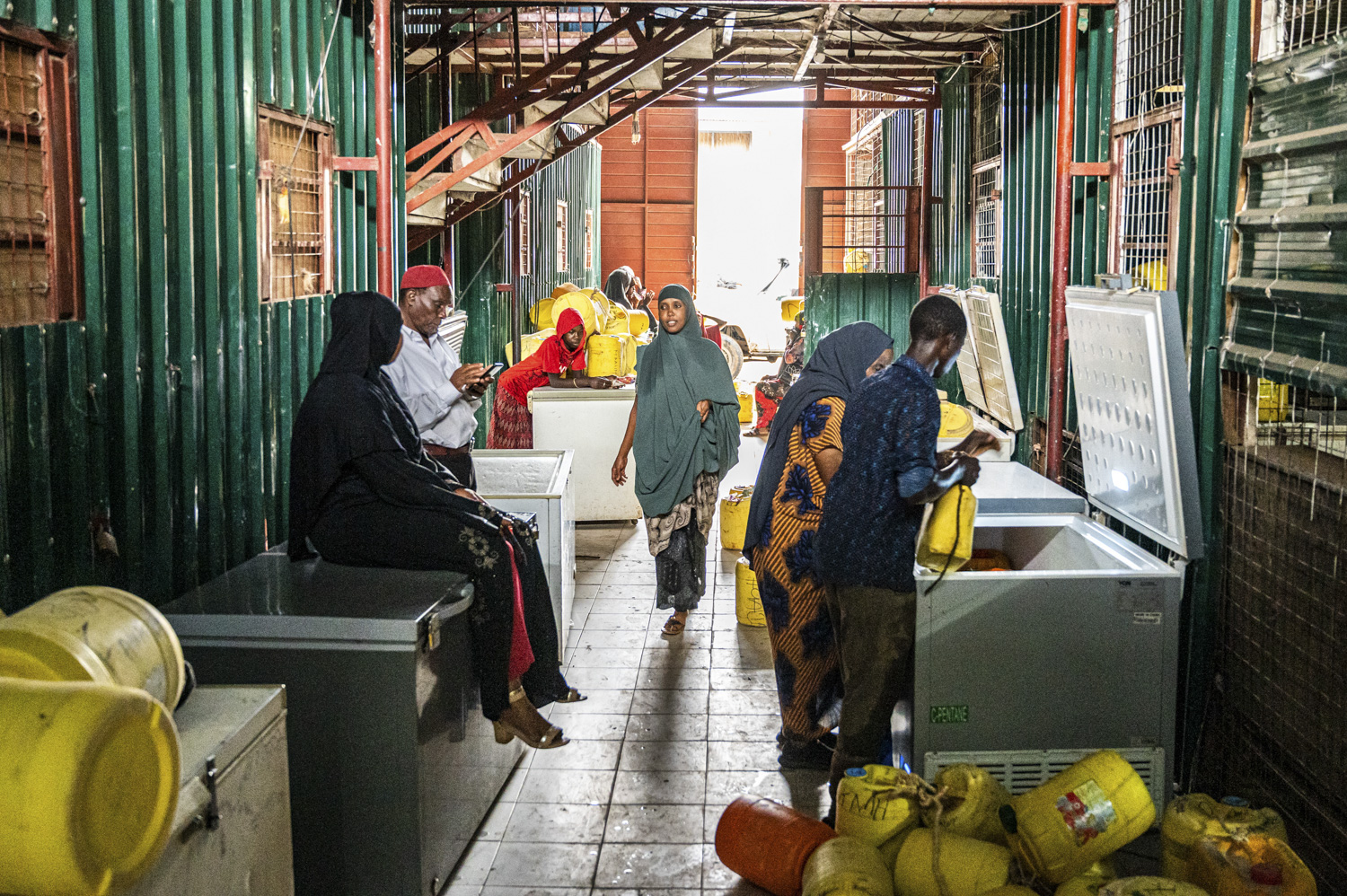 KENYA, Isiolo,From 2 p.m. onwards, many women come from the surrounding villages with the camel s milk that they collected earlier in the morning. 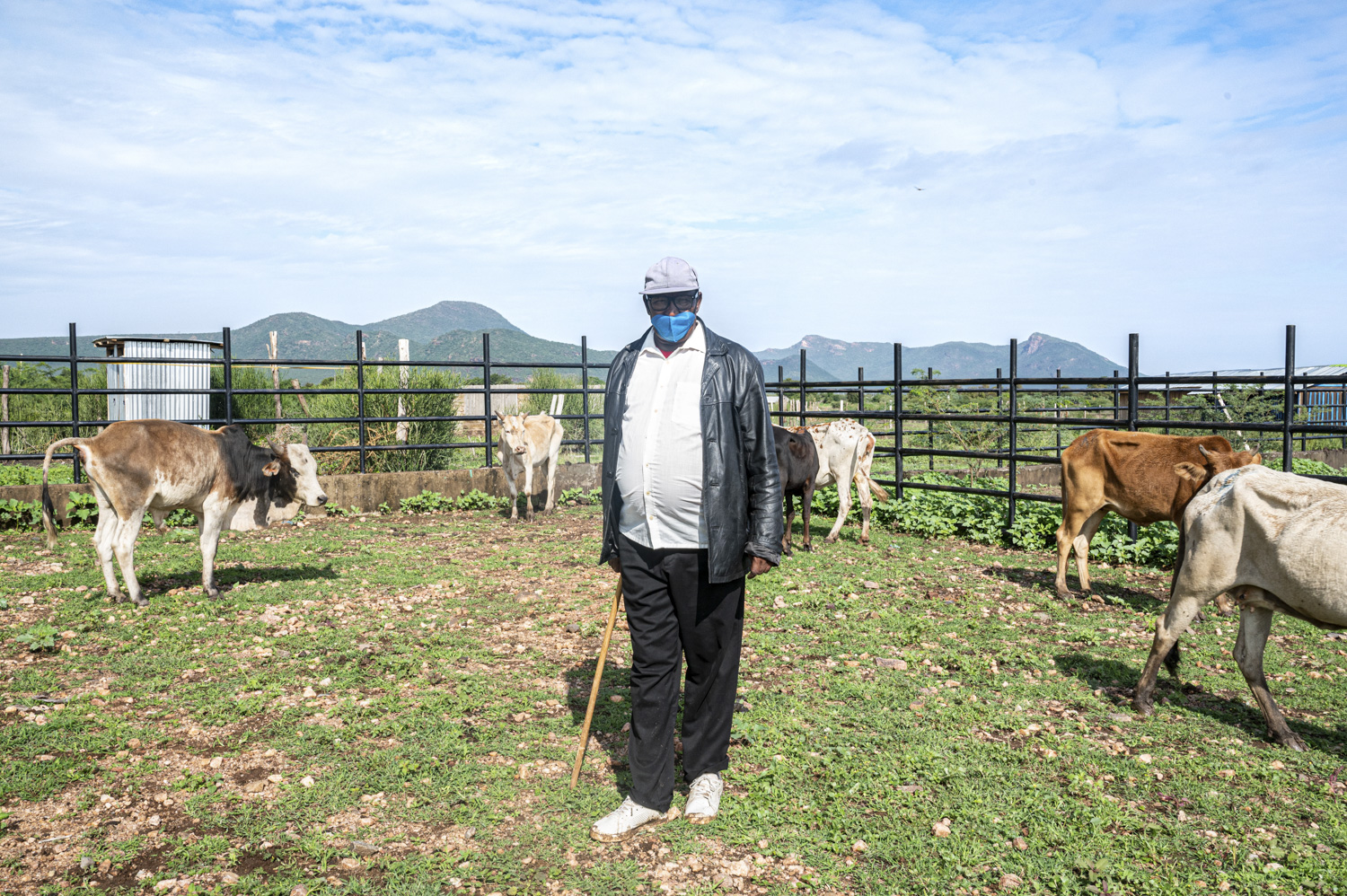 KENYA, Isiolo, Abdi Alake is 53 years old and one of the market managers. Its role is to make sure the market is going well, but also to sort out the differences when ranchers accuse each other of selling stolen cattle. The number of market participants decreased with the drought, while the price of goats fell from 8,000 to 9,000 ksh to 5,000 or 6,000. Previously, droughts were not so severe, while now there is one every under two years. 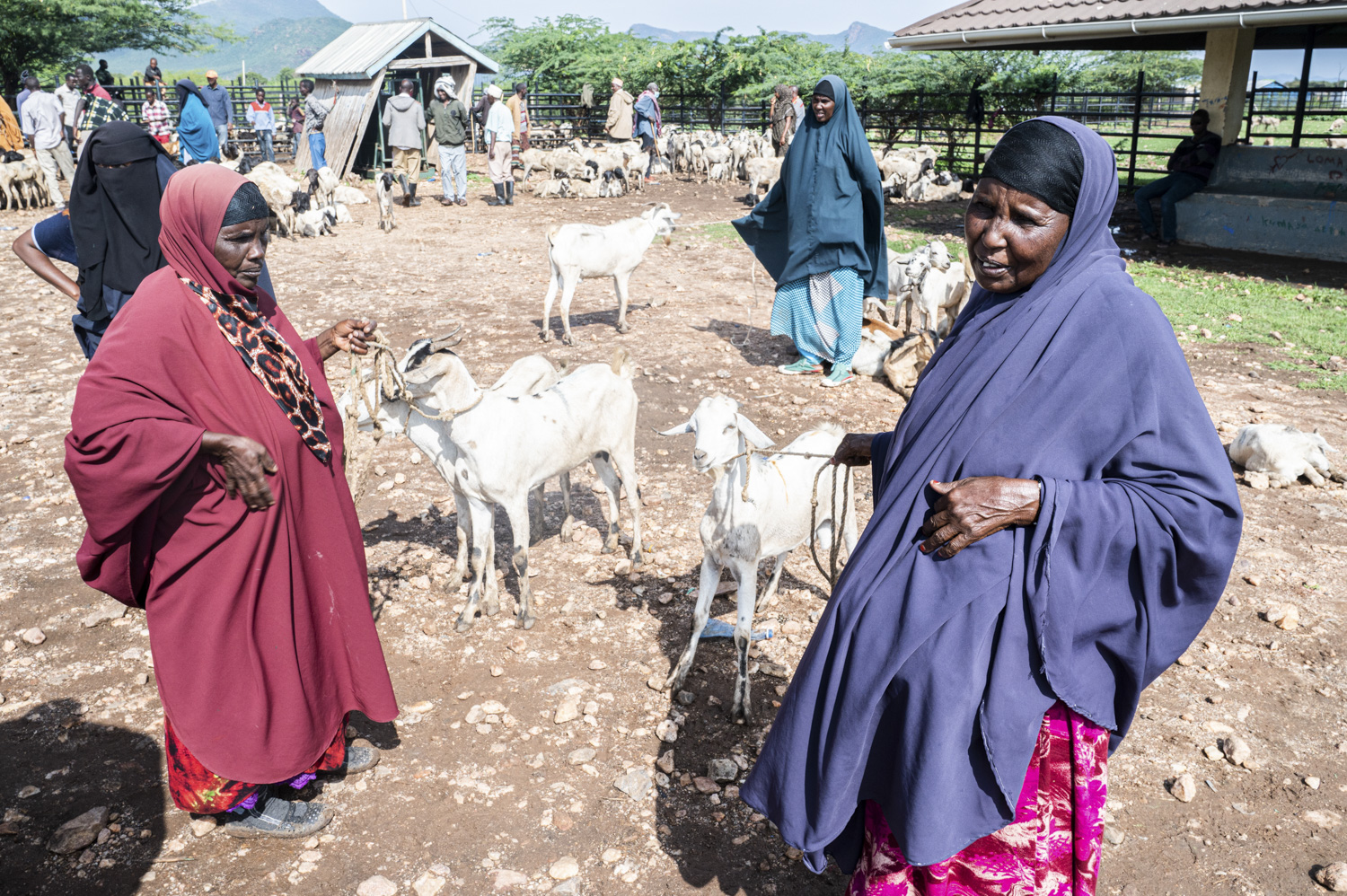 KENYA, Isiolo, Habiba Ali and Abidja Hassan live in Isiolo and come to all markets to buy cheap goats from pastoral ethnic groups (Turkana, Samburu, Borana) and resell them to buyers from non-pastoral groups (Meru, Kikuyu). During the drought, they all lost their herds. Market trade is also affected by droughts as there are fewer goats in the market, and both buy and resale prices are lower. 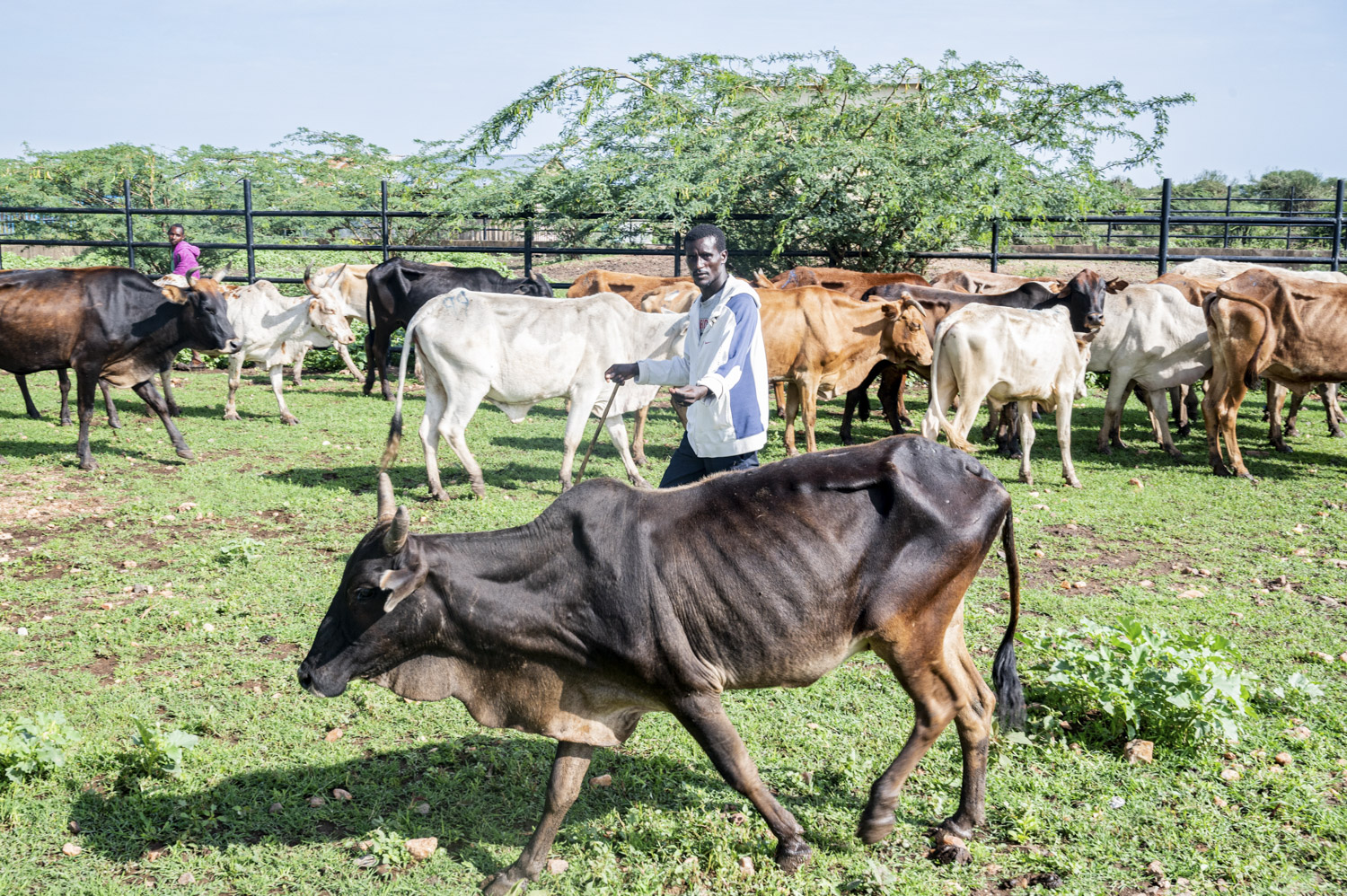