« I love Perspektivny » – the trend of new districts in Russian suburbs.

In Russia, as the countryside faces rural depopulation, new suburban districts are being built to accommodate a new urban population. “Perspektivny”, in Stavropol, is the archetype of these new neighbourhoods both for its “copy/paste” town planning and for the symbols that this space reflects, and gives a better understanding of the urban changes in contemporary Russia.

Stavropol is one of the main cities in Southern Russia, and its population has increased by 25% in little more than twenty years to reach 450,000 in 2021. The newcomers from post-soviet countries and rural areas are driven by the search for better accessibility to economic activities and services. At 8 kilometres from the old town of Stavropol, « Perspektivny » – a one square kilometre district – is absorbing this flux of new arrivals proposing affordable housing. One type of urban block is replicated multiple times, forming a « copy/paste » pattern. Unlike the Khrushchyovka – early 60’s soviet monochrome concrete panelled or brick building – , Perspektivny’s buildings are colourful, yellow, orange or red.

This new district was constructed by « Yug Stroi Invest », (YSI) a local company which is operating since 2003 and is now at the top-5 of construction companies in Russia. It currently has seven new micro-rayons (districts) under construction, of various sizes, spread over the three biggest cities of the southwest region – between the Caucasus mountain range and the Ukrainian border -(Rostov-on-Don, Krasnodar and Stavropol). In « Perspektivny », YSI’s blue and yellow logo is reproduced everywhere, on every building, bus stop and school playground. Following the tradition of the USSR propaganda, applied in a capitalistic context, this insistent branding creates a dystopic environment, giving the impression that « Yug Stroi Invest » is the local authority, overpowering the usual historical and patriotic patterns that are frequently found in urban areas in Russia.

The popularity of “Perspektivny » can be explained by its capacity to offer a seemingly ideal suburban way of life to low and middle-income households. It proposes a clean and safe environment with access to many different facilities, such as medical centres, schools, parks for children and sports playgrounds for adults. This city extension, linked to the old Stavropol by roads and public transportation lines, is surrounded by a cycling path, following the trends of contemporary urbanism, aiming to promote non-motorized mobility. For people coming from rural areas and less urbanized post-soviet countries, this district is the quintessence of modernity.

Near to « Perspektivny », « YSI » is building a new upper-class micro-district, called « Rossiskii” (Russian). Each building differs from the other in size and facade and offers housing variations, which was an unconventional feature during the Soviet era. « YSI » aims to make this new area one of the main attractions in Stavropol, using public spaces to disseminate a patriotic narrative. The newly constructed museum « Russia – my history », is part of the « My history park » network, which tells the history of Russian civilization in twenty-five medium-sized cities in Russia. Nearby, the monumental fountain is promoted as the largest light and music fountain in Southern Russia, and the monumental statue of prince Vladimir, known as the Baptist of Russian civilization, stands in the middle of the main square. The north of the new district, Victory Park is dedicated to the « Great Patriotic War » (second world war). These newly constructed landmarks link « YSI » new districts to Russian collective identity.

Yuri Ivanov, the founder and director of « Yug Stroi invest », promotes himself as a local philanthropist. His significant achievement is the construction of the Vladimir church at the foot of one of “YSI” eighteen-floor building blocks. Soon after its completion, the church was given the status of a cathedral, and Yuri Ivanov was honoured by Patriarch Kirill, leader of the Russian Orthodox Church. Ivanov was born in the 1960s in Krasnogvardeyskoye, a small town situated 120 kilometres north of Stavropol. In the early 2000s, he started his construction company, when the demand for affordable housing driven by the rise of population in mid-size cities, created business opportunities in the construction sector. At the same period, Krasnogvardeyskoye, where Ivanov was born, lost attractivity and faced rural flight. The population has been constantly decreasing over the last few years, from 15,992 in 2010 to 14,721 in 2020. On Lenin Street, frozen in time, a monumental fighter plane from USSR is displayed in the garden of a local administration. On the main avenue, many houses are for sale. Daily buses to Stavropol, Rostov-on-Don or Moscow link the working population to more attractive cities. 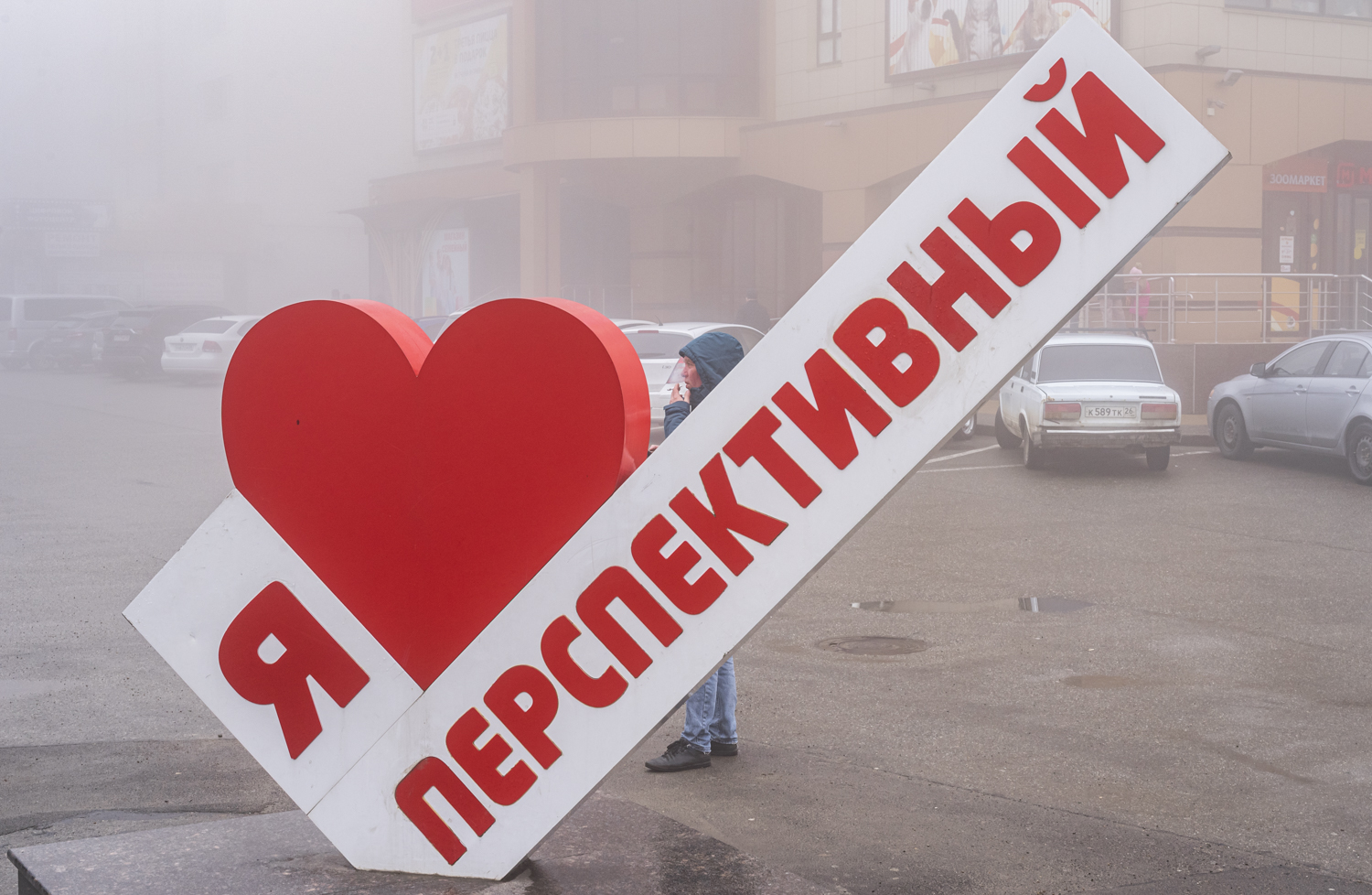 " Я люблю Перспективный” " At the junction of the two main streets, one can see a sign "I love Perspektivny" is visible. "Perspektivny" is the most important micro-rayon built by "Yug Stroi Invest", and its construction started in 2013. It became the archetype of the new trend of affordable housings in Russia. 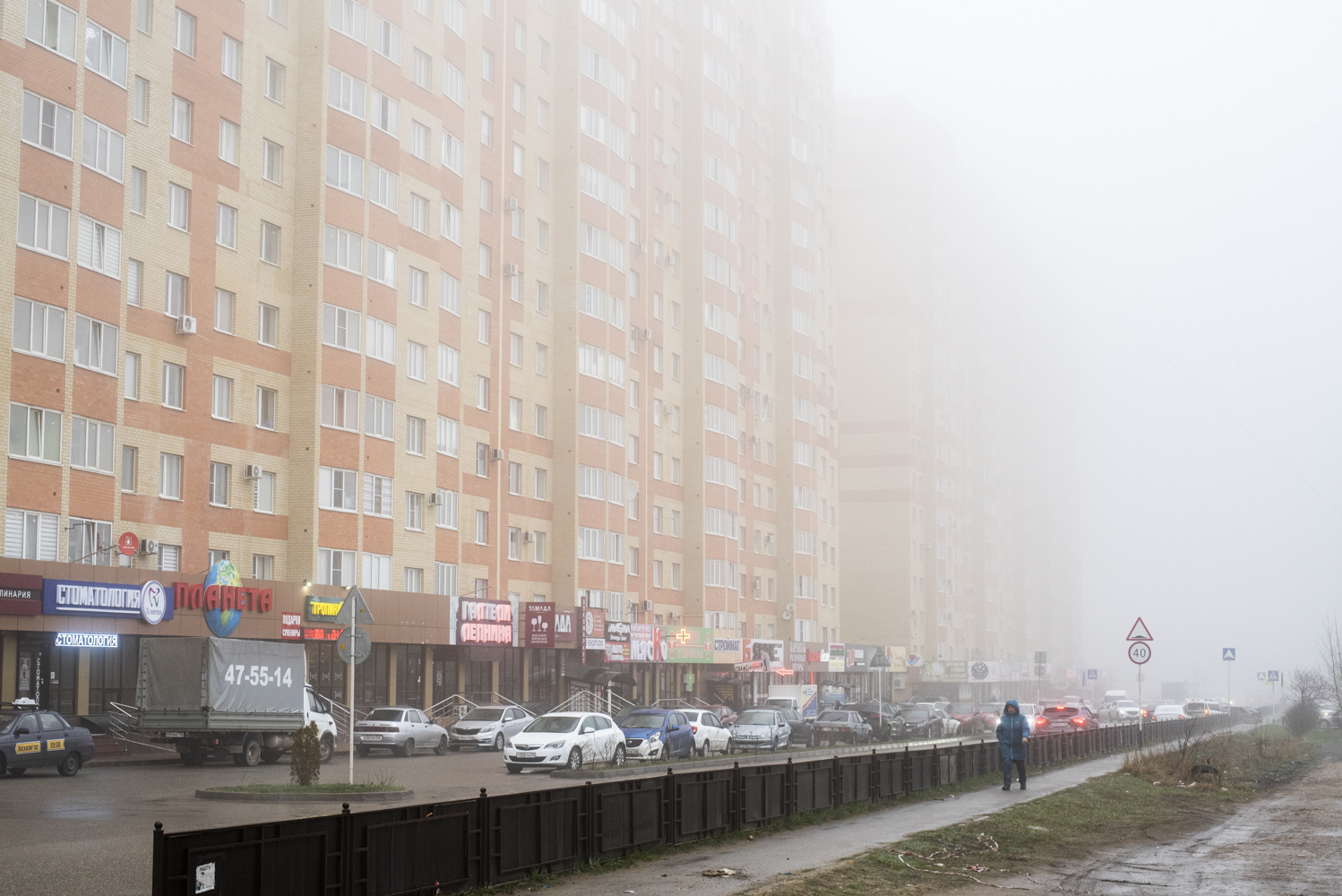 A woman is walking on the side of the road which separates the eighteen floors building in "Perspektivny" from the older suburb and its one-storey house. The sideway of the older suburb is not maintained in contrary to the newly constructed "Perspektivny". The new micro-rayon is popular among its residents for its cleanliness. 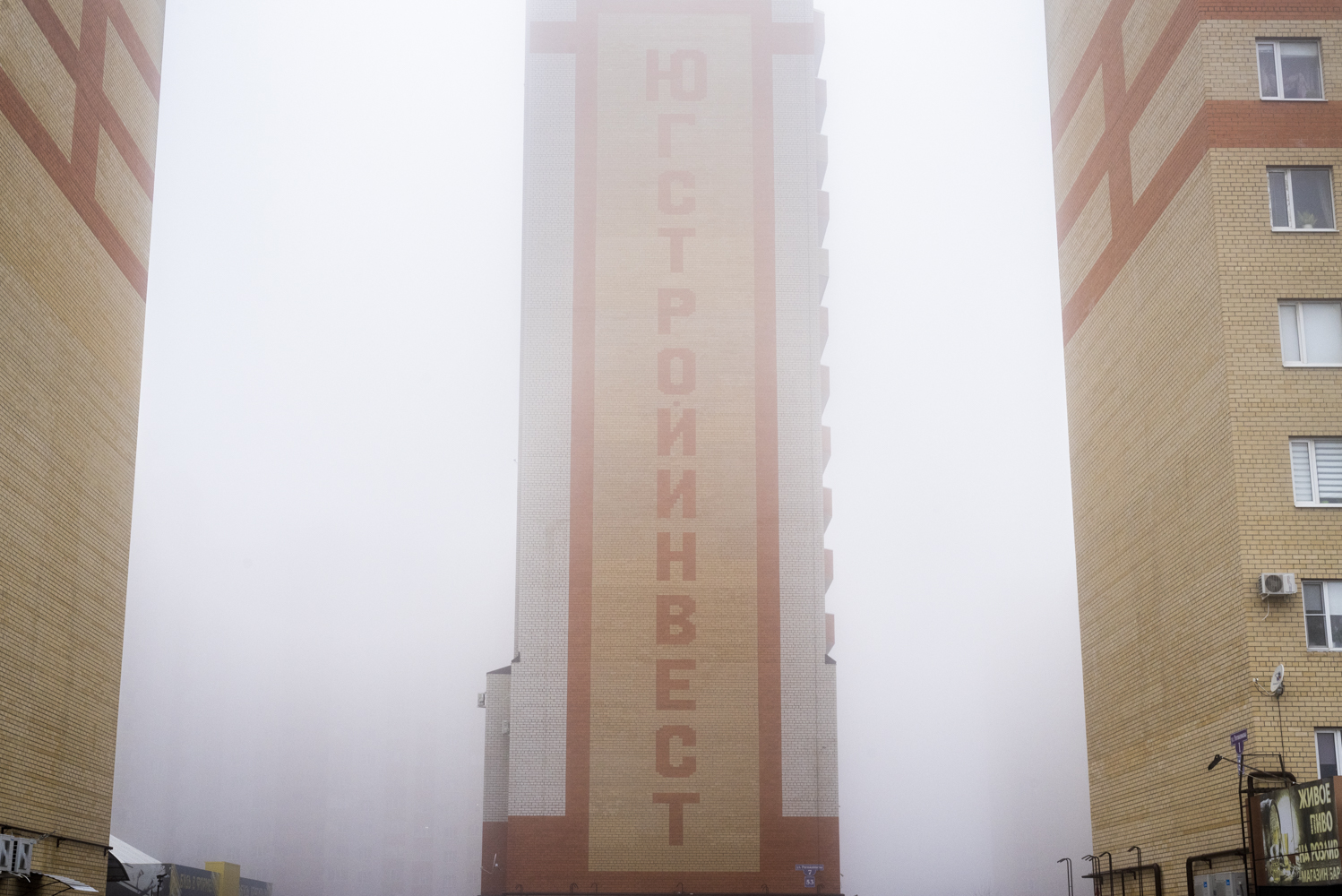 "Yug Stroi Invest" is written vertically on the side of one building block. Each of the seventy building blocks is stamped with the name or logo of the real estate developer, making the impression “YSI” is the local authority. 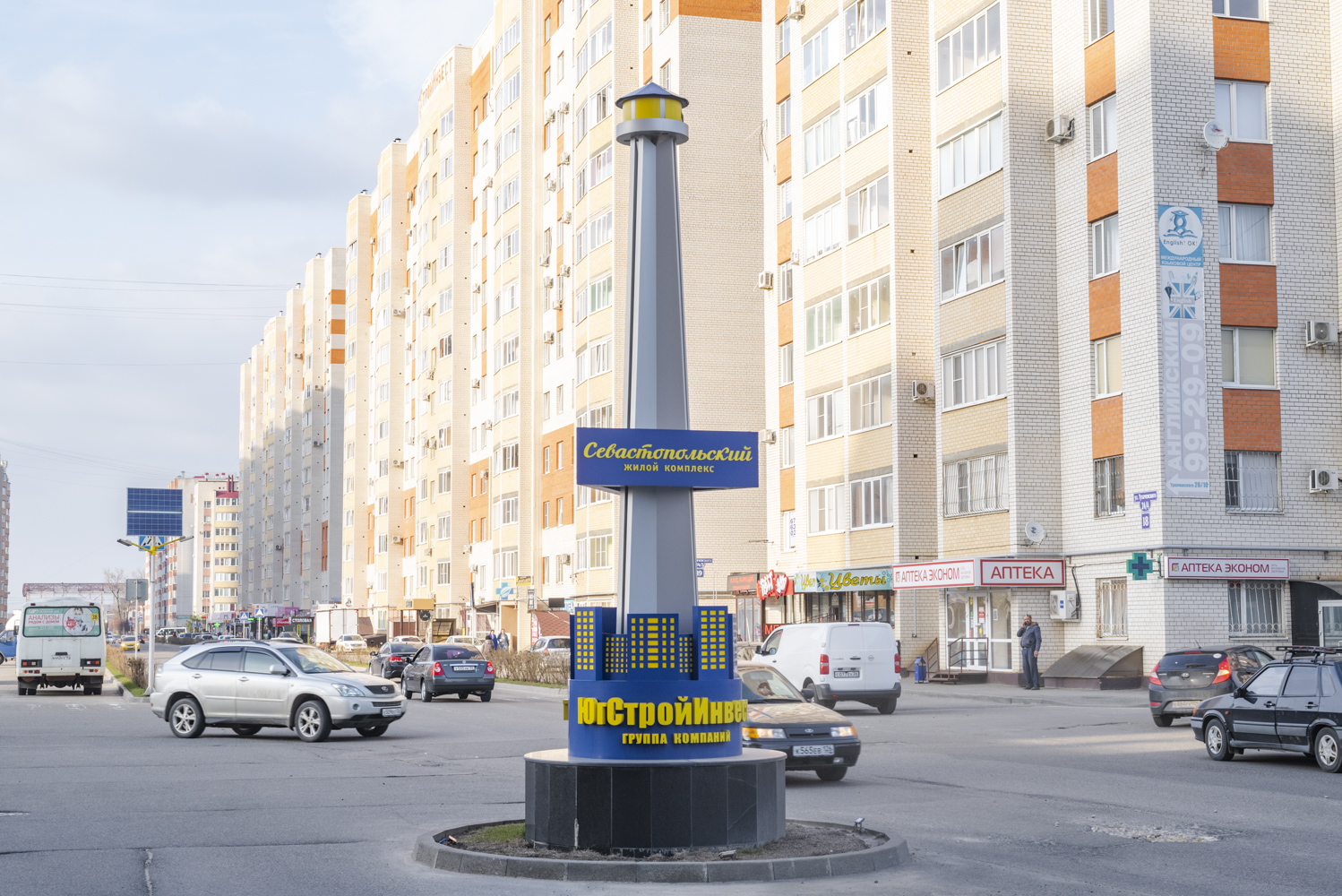 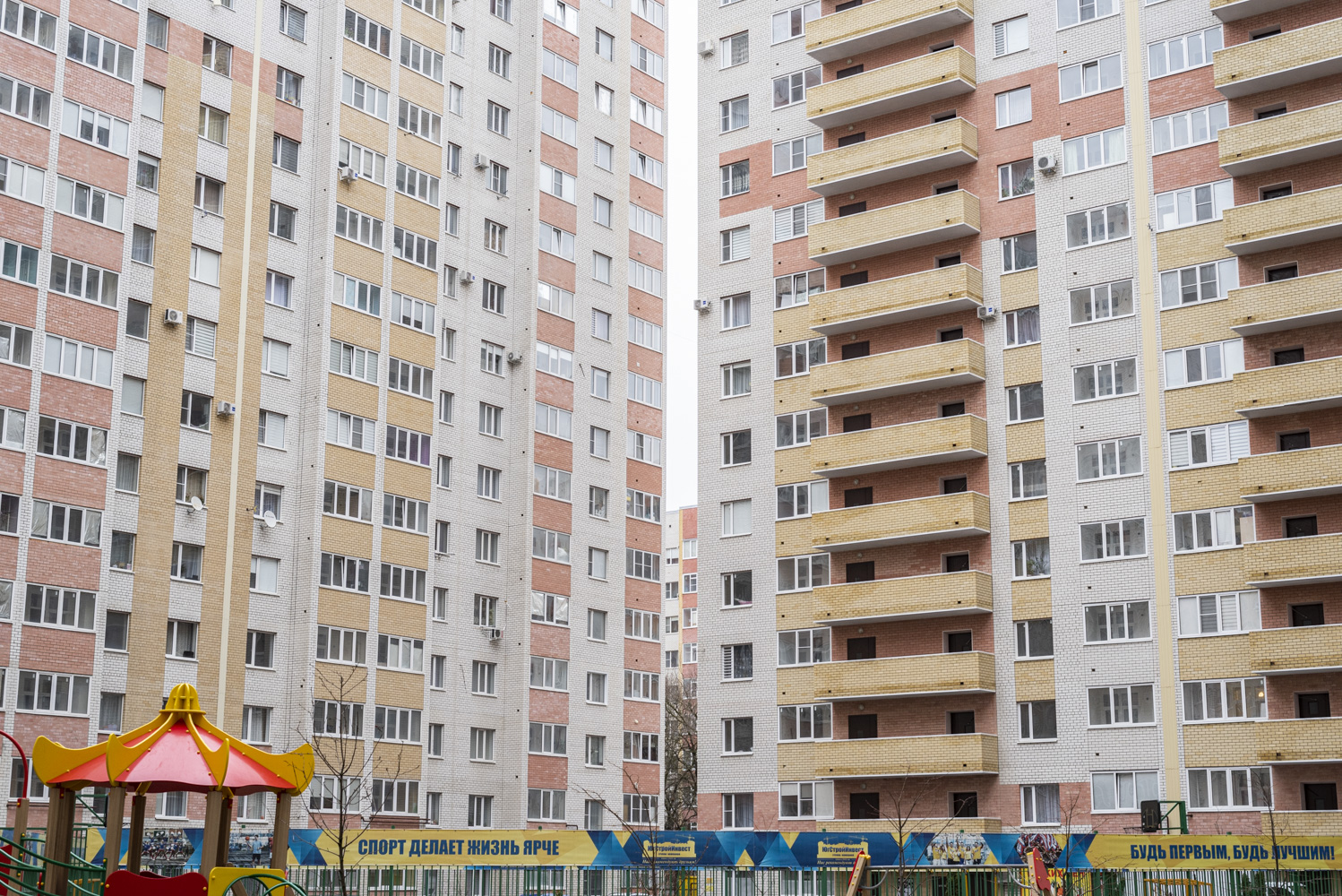 At the foot of the building blocks, the logo of « Yug Stroi Invest » is visible on the sport facilities, as well as the sentences « Do sport, live better » and « Be the first, be the best ». Access to sports facilities is a key component of the ideal « suburbian Russian Lifestyle » that YSI promotes, and also aims at making the area "family friendly". 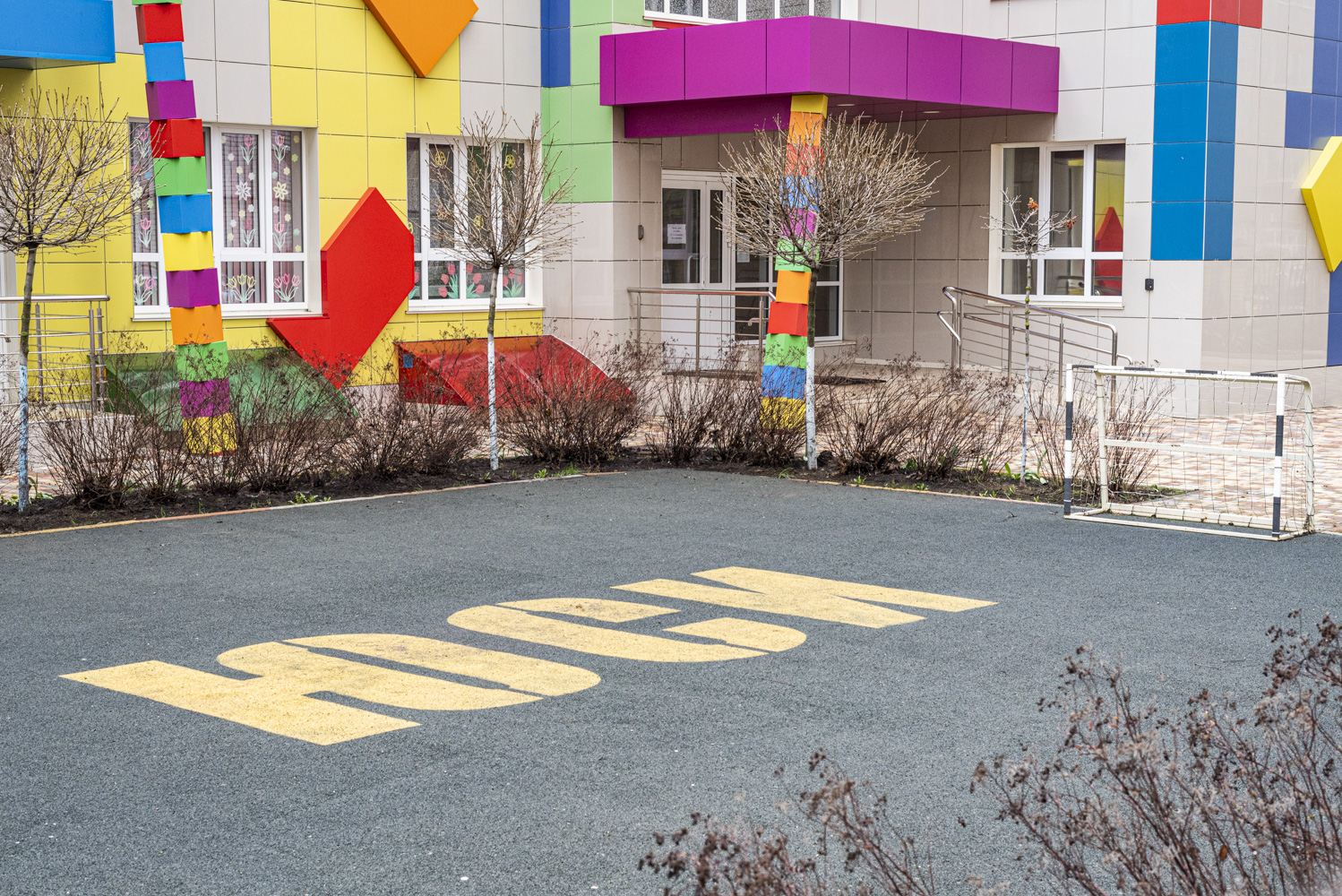 The initials “YSI" for "Yug Stroi invest" are painted on the playground of one of the two public schools of "Perspektivny". The name and logos of the construction company can be found in any aspect of the lives of the residents, from school to parks and sport facilities. 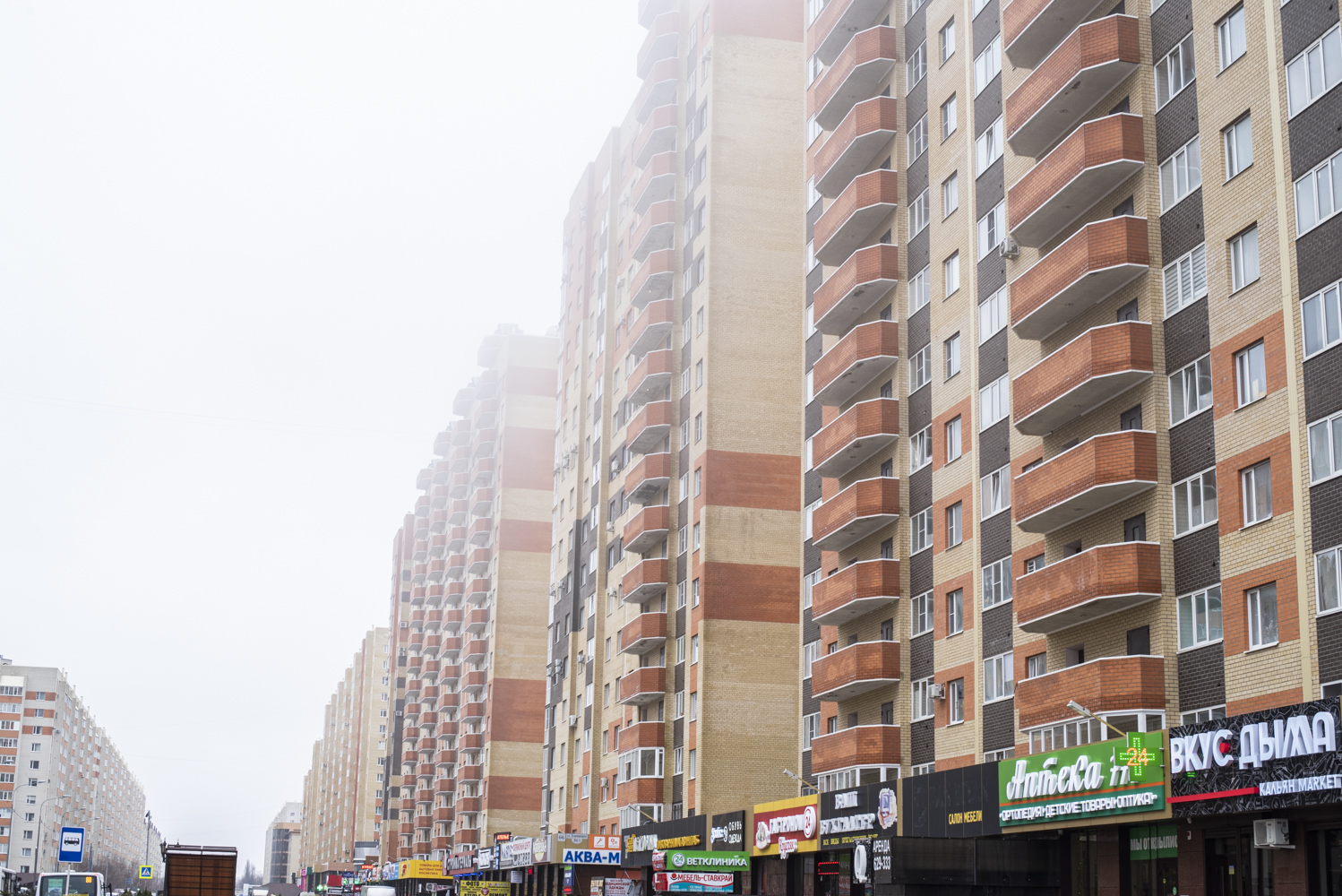 The 800 meters-long main avenue is surrounded by eighteen-floors building blocks. The ground floor of each building has to be used for commercial purposes (according to urban planning standards). 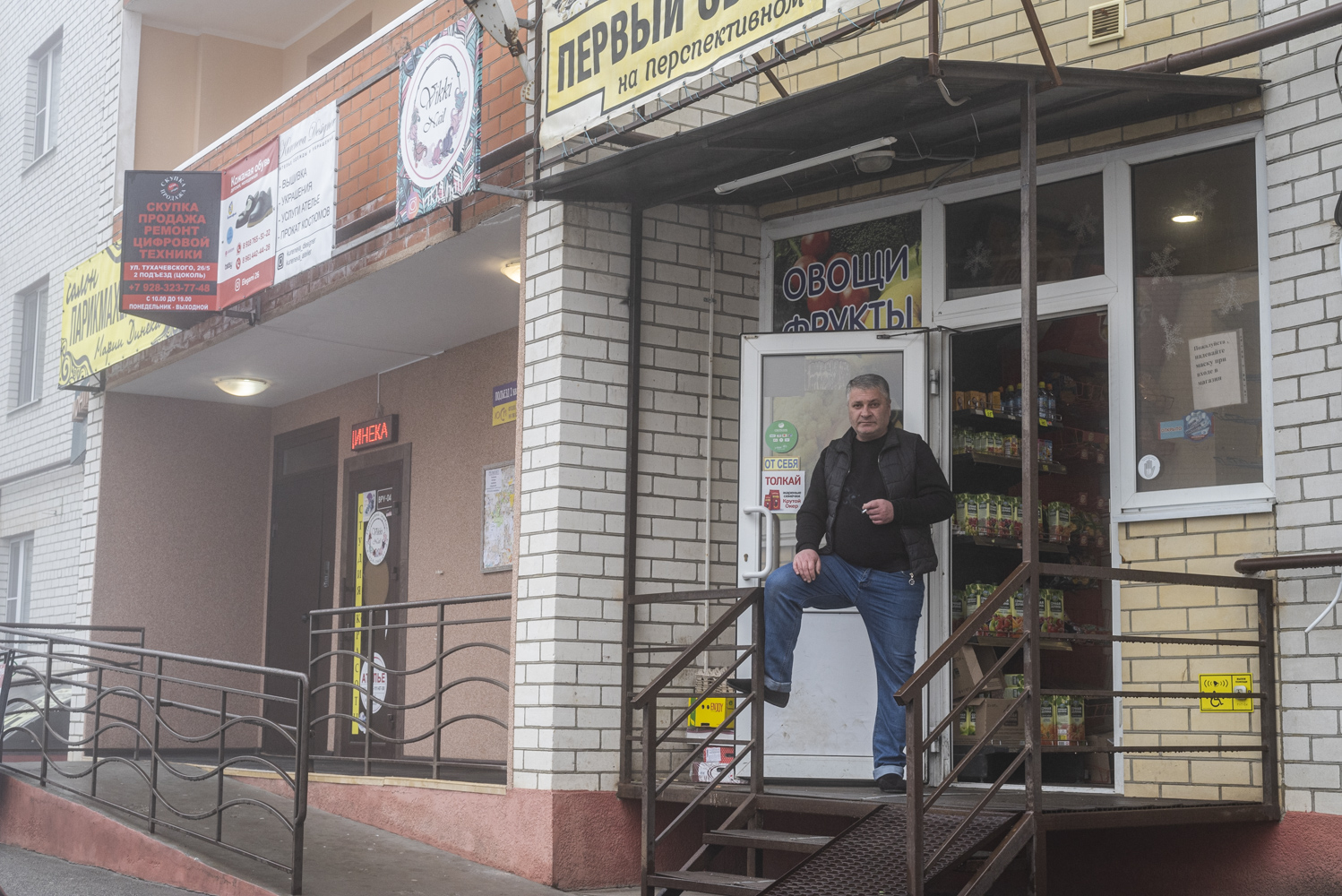 Gore is from Armenia. He and his family moved to Russia about 20 years ago. They first moved to Rostov, the biggest city in the south-western of Russia. Then, they moved to the old city centre of Stavropol. When "Perspektivny" was constructed about 8 years ago, he moved here. Since, he runs a shop on the first floor of a block. Before, when the area was still a field, he used to come here to organize chachliks, barbecue popular among Russians. 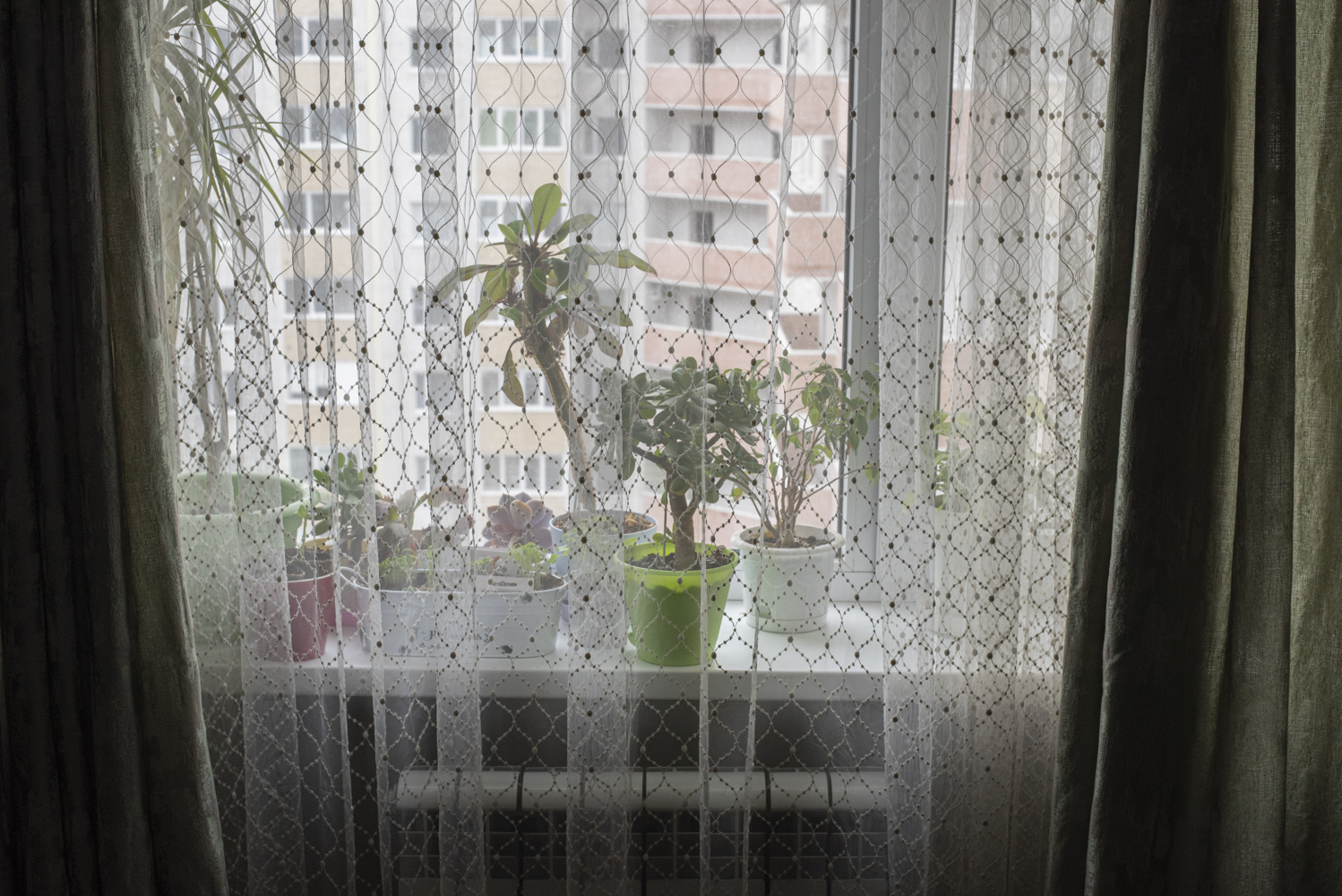 The typical « Perspektivny » patterns, made of yellow and orange colours, can be seen from Sergei s living room window. Recently, he and his wife bought a ready-to-live apartment for 1,3 million roubles, which is cheaper than in the old town according to him. The infrastructures offered are also better than in the old town. He hopes to buy a bigger apartment before he and his wife have a baby. 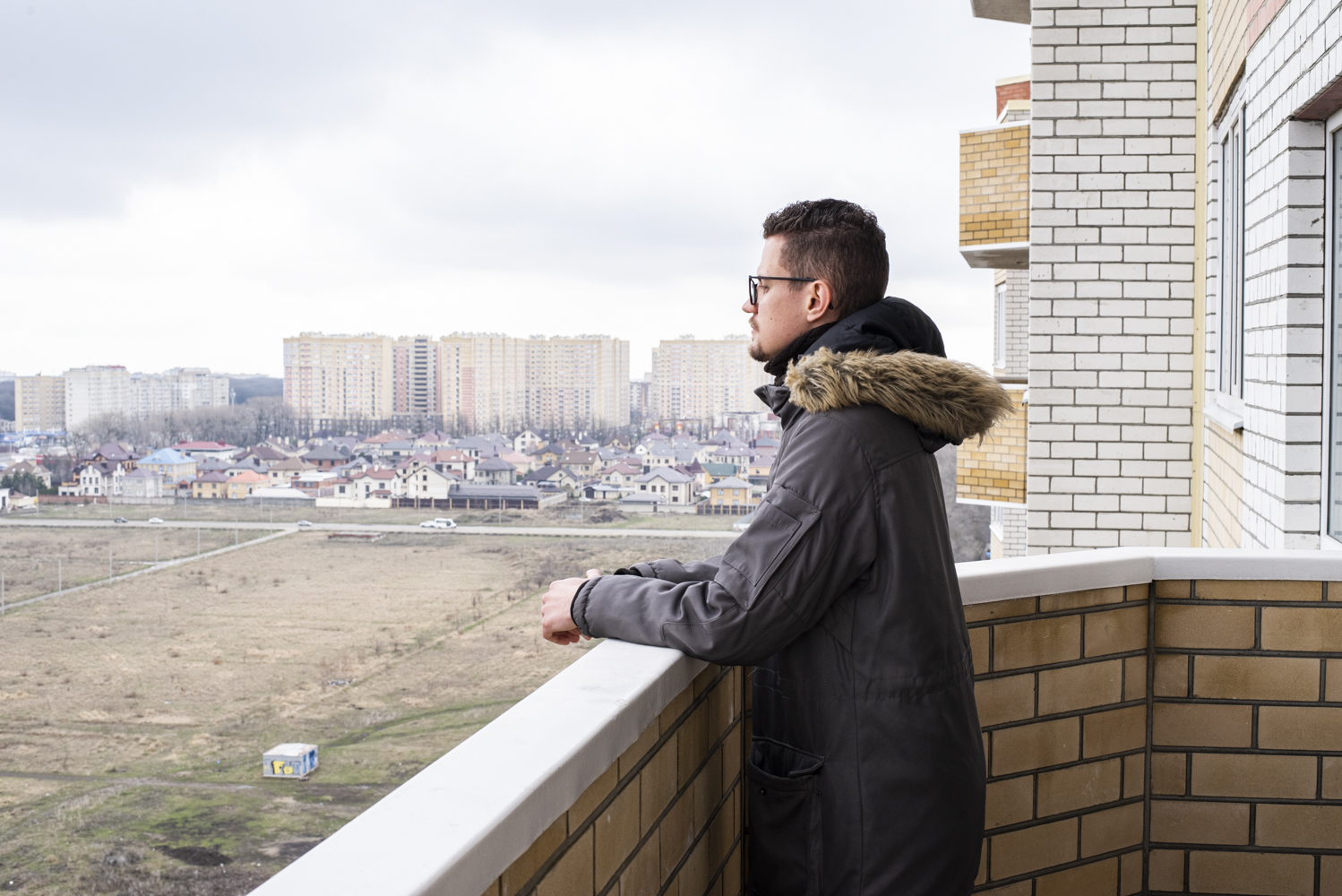 Sergei is enjoying the view from the eighteenth floor of his building block. "Perspektivny" is surrounded by empty fields and one-storey houses. Sergei was born in the eastern part of Russia, and moved all over country following his father who was in the military. He studied journalism in Stavropol, and is now settled here. . 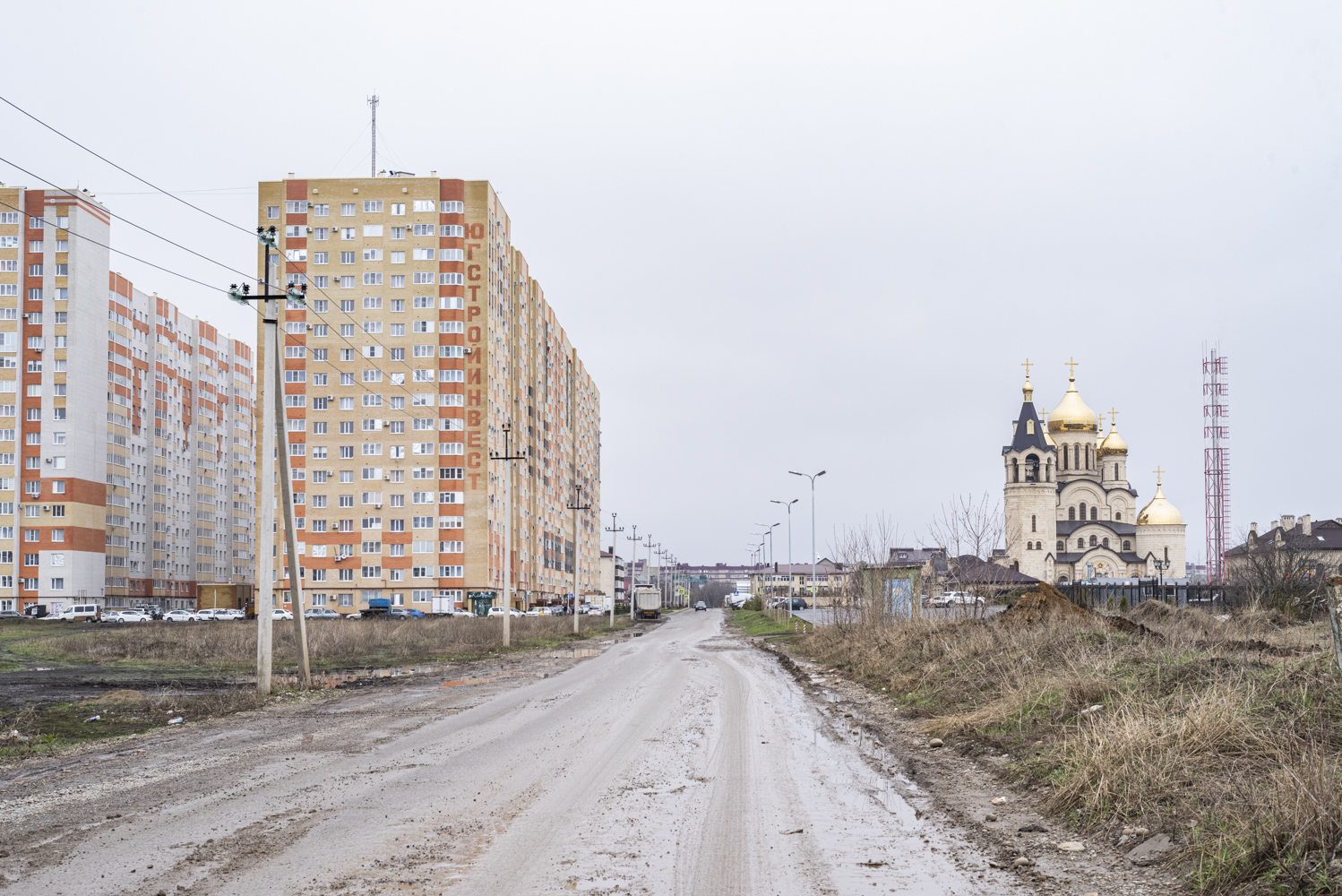 At the skirt of « Perspektivny », the Vladimir church was financed and built by YSI. The founder and director of YSI, Yuri Ivanov, was then honoured by Patriarch Kirill, leader of the Russian Orthodox Church. Although there is a significant number of Muslim communities, from the Caucasus and Central Asia, no mosque was built in “Perspektivny”. 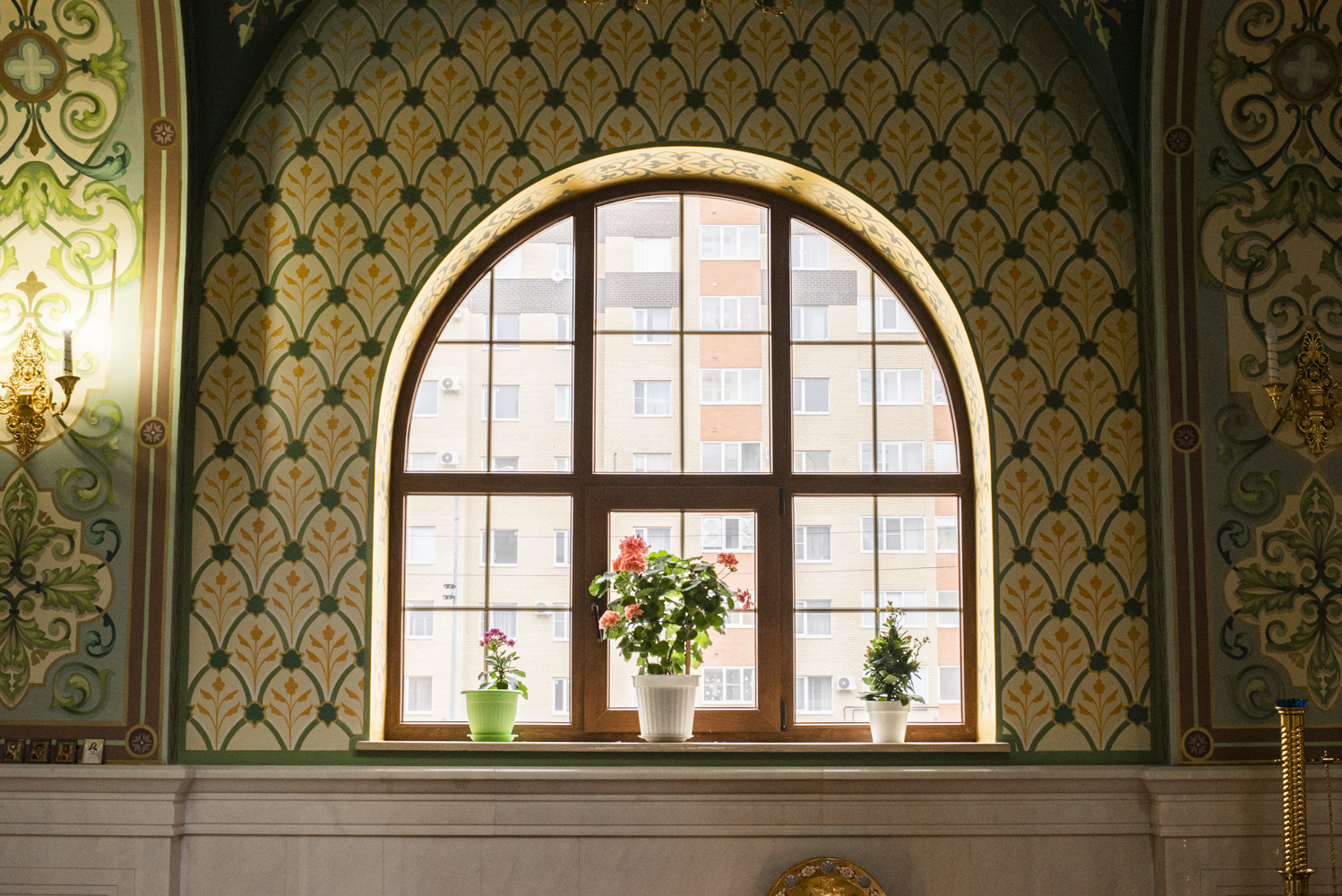 The left-wing window of the Vladimir church has a direct view on "Perspektivny" typical yellow and orange facades, of one the neighbouring “YSI” building. 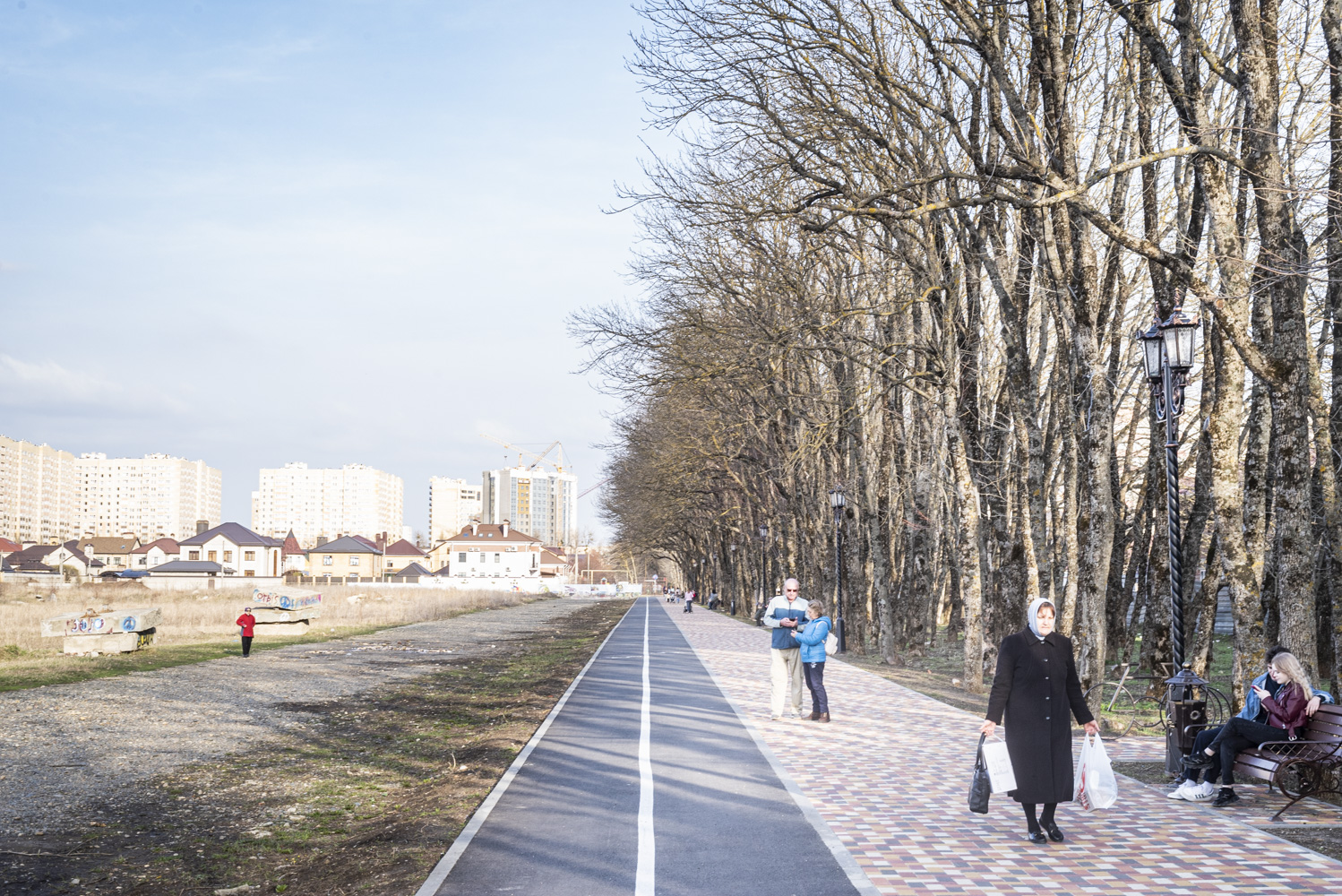 At the end of the afternoon, residents of "Perspektivny" are wandering on the pedestrian pathway and enjoying one of the first days of good weather of the year. The cycling path is delimiting the border of "Perspektivny", contrasting with the empty fields. 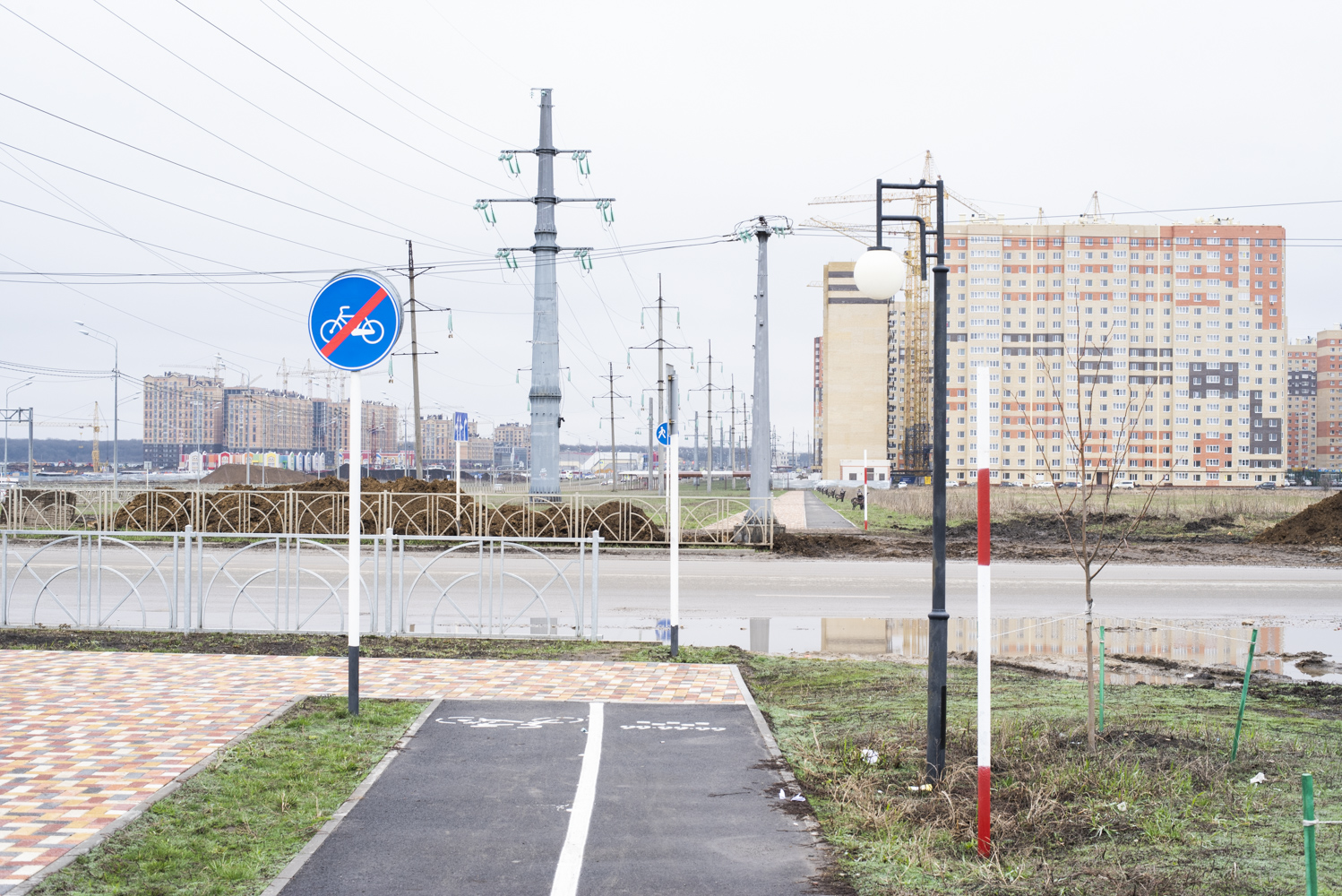 The cycling path ends abruptly and is not yet connected to a wider network. It highlights the friction between the fascination towards contemporary global trends in urban design and the challenges in implementation. 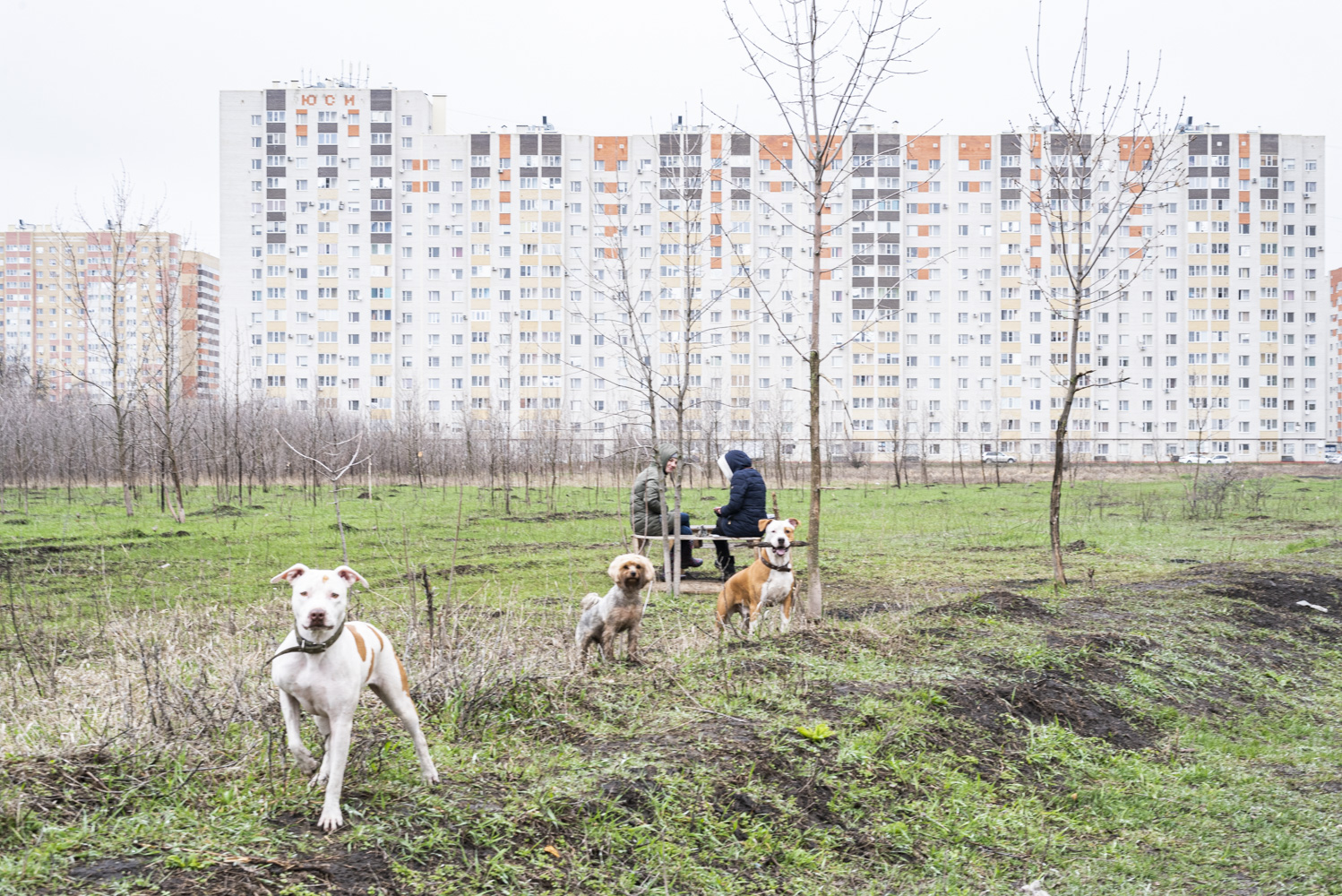 On a Sunday afternoon, two residents from "Perspektivny" are resting after walking their dogs. With trees and grass, this "yet to be constructed site" is one of the rare non-paved and asphalted areas inside "Perspektivny". 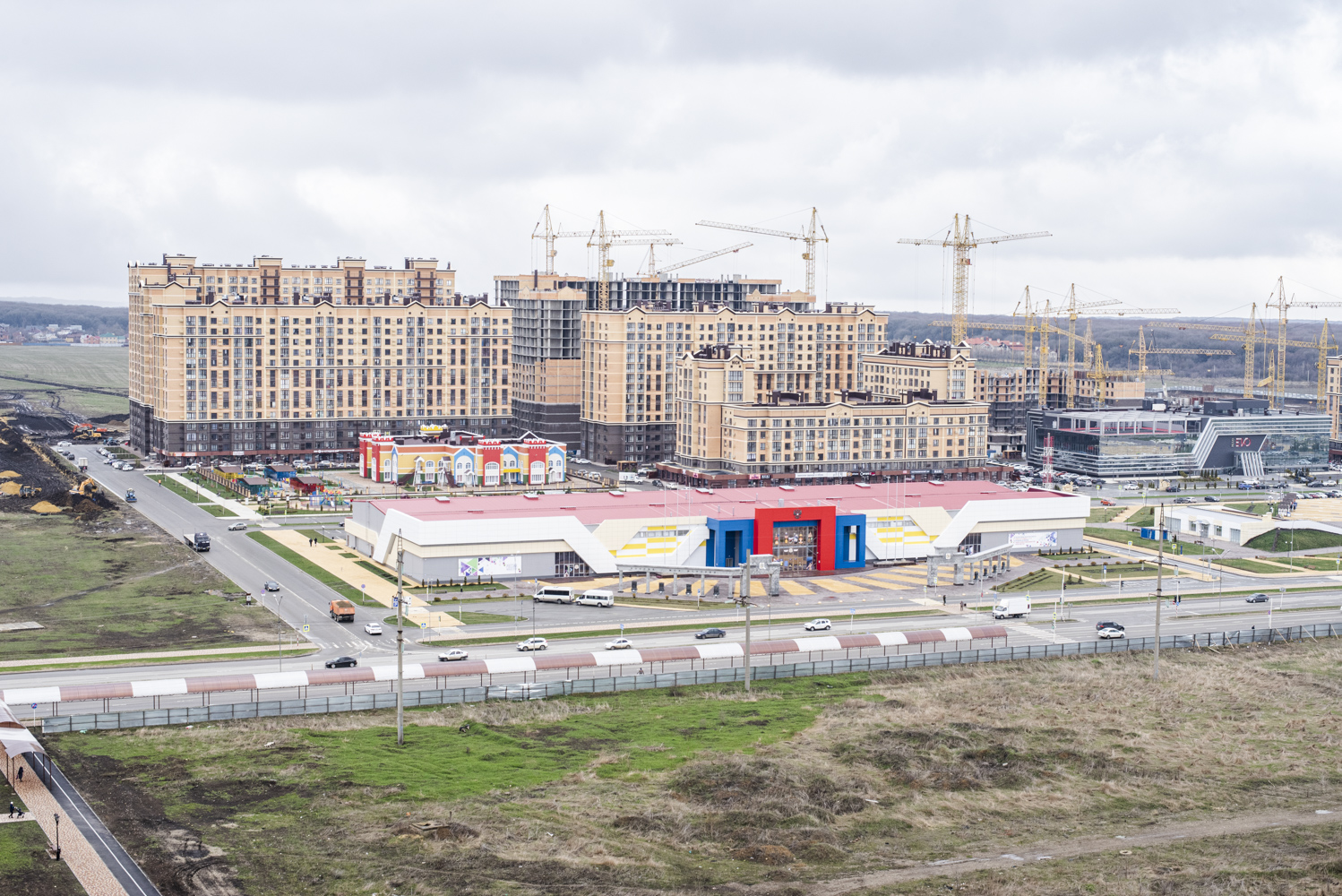 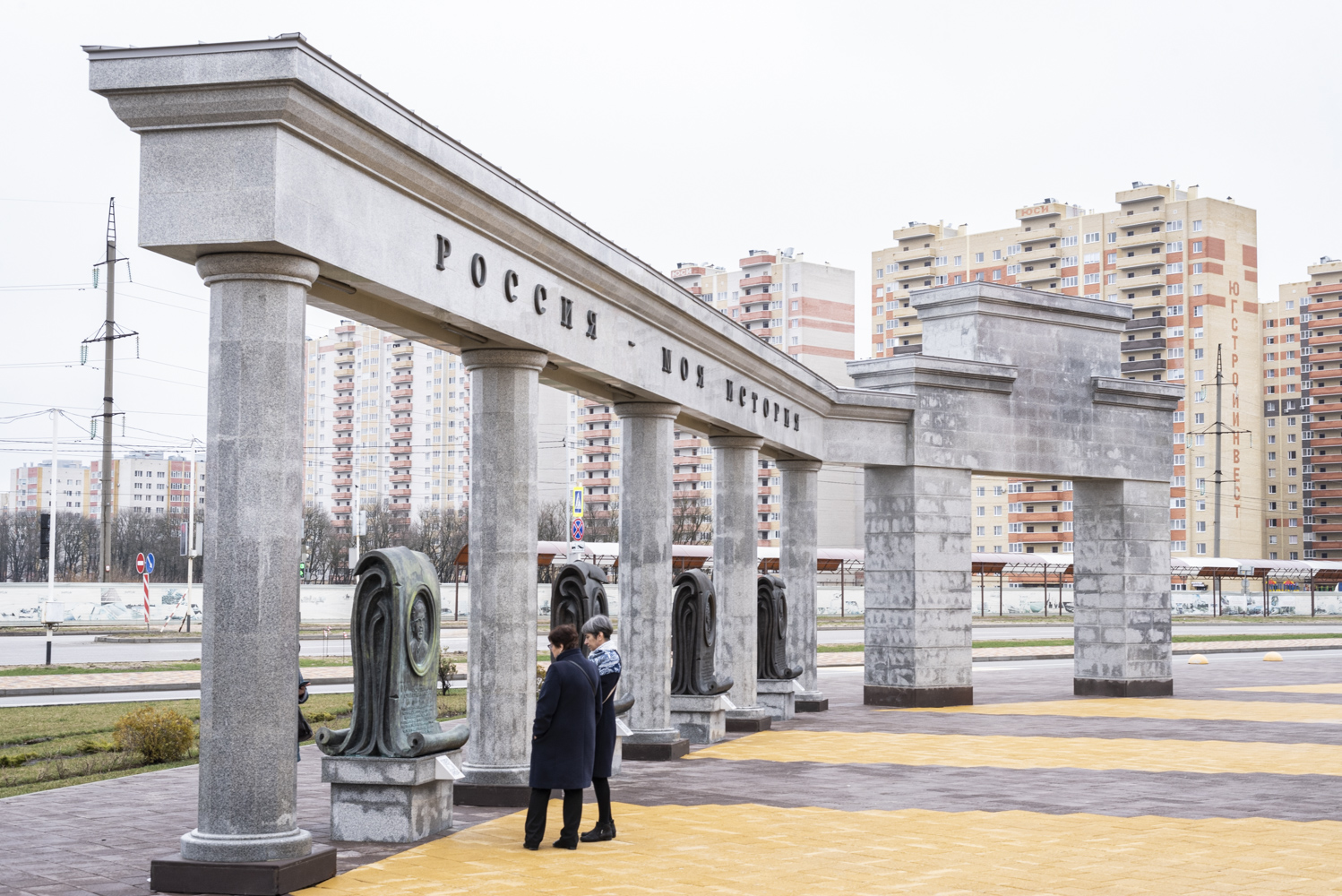 Visitors of the museum "Russia, my history" are reading the text under the portrait of Mikhail Gorbachev, the last leader of the Soviet Union, who was born in the Stavropol region. The "Russia, my History" museum is part of the "My history park" network, which tells the history of Russian civilization in twenty-five medium size cities in Russia. 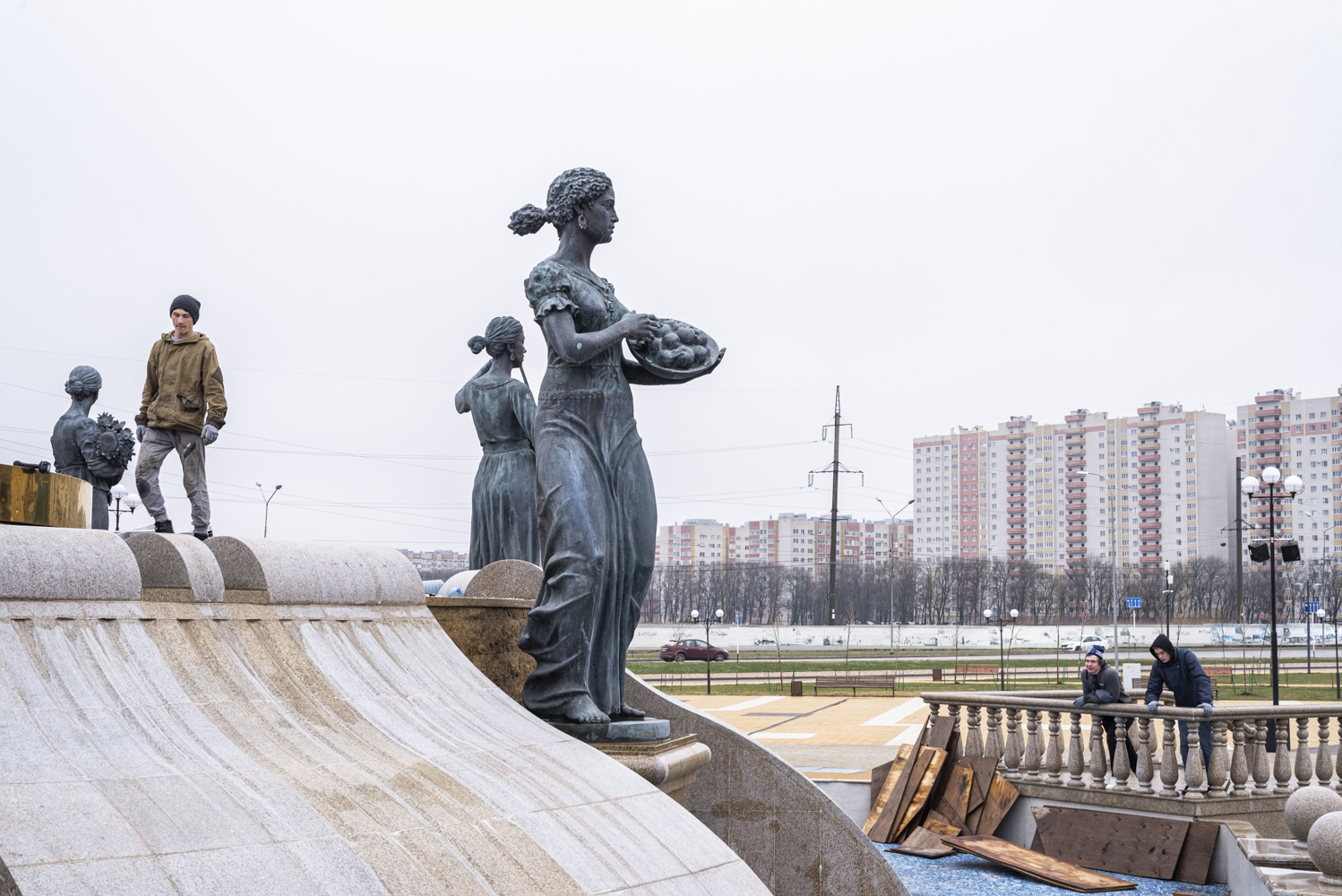 Early spring, municipal workers are repairing the monumental fountain before a future re-opening. It is the largest light and music fountain in the southwest region in Russia. It s seen as a sign of modernity by the residents, and strenghten the image of entertainment and leisure of the micro-rayon, which aims to become an attraction in Stavropol. 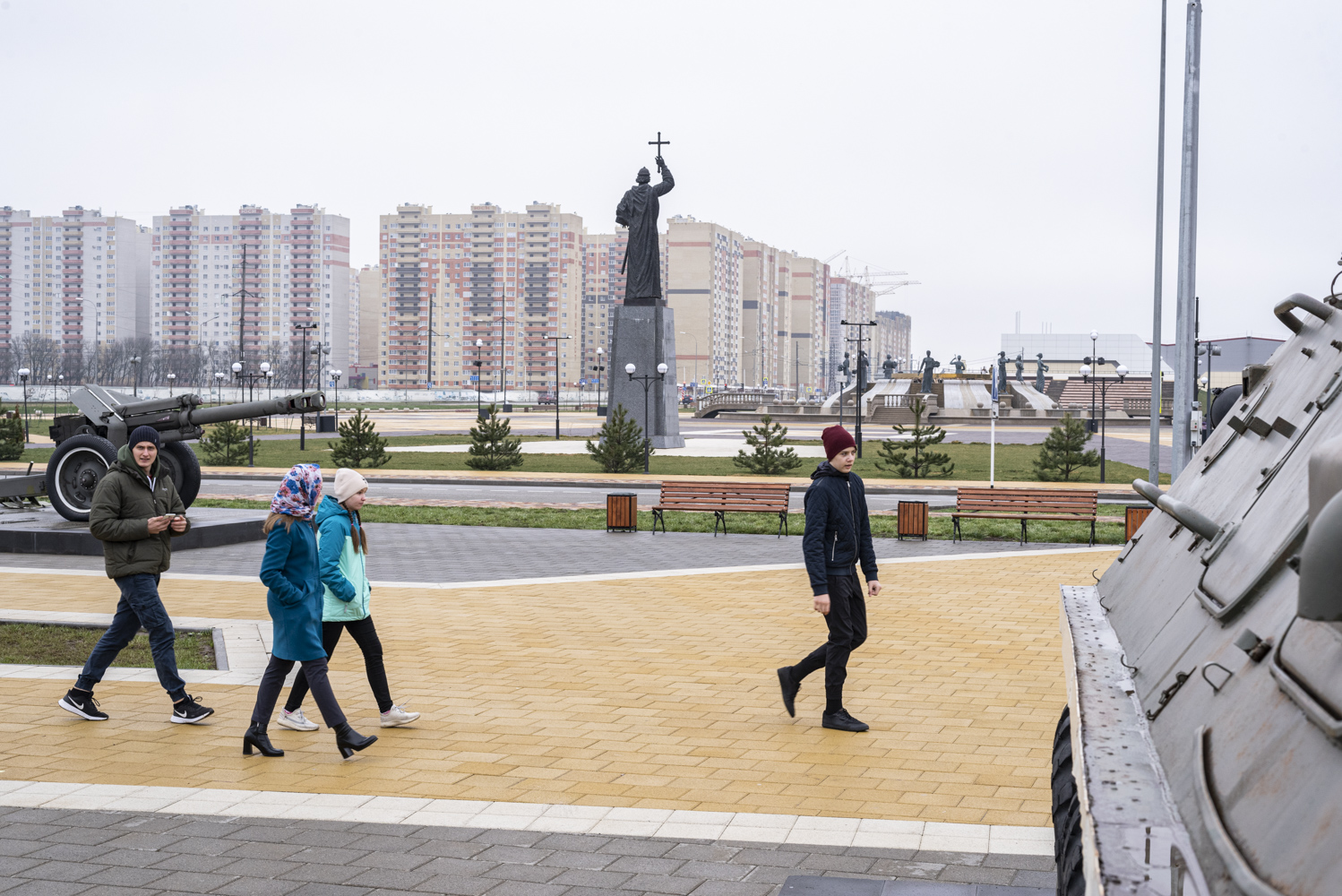 On a Sunday morning, four young people came for the day to visit the newly constructed Victory Park, and the other sights of the new-district. They come from a small town situated 70 kilometres away from Stavropol. In the future, they wish to have the opportunity to live in Stavropol, as it offers more activities and better accessibility to services than their hometown. 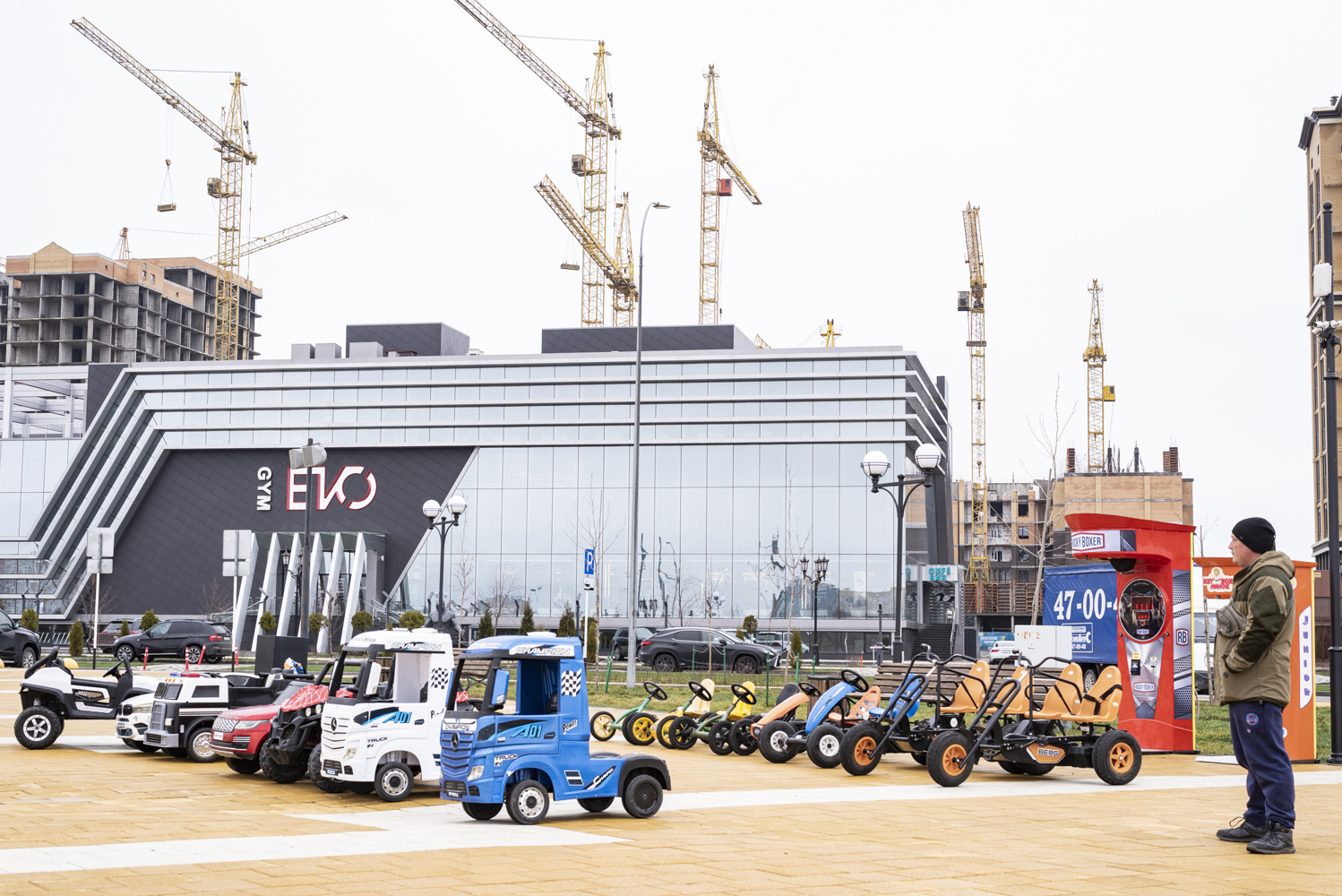 Maxim comes from Lougansk, in Eastern Ukraine. He moved to Russia about two years ago. Now, he lives in "Perspektivny". Several times a week, he goes to different places in the new district where he proposes electric cars for children to rent. Since 2015, about 600,000 Ukrainians from the eastern regions got Russian nationality and settled in different regions near the border. 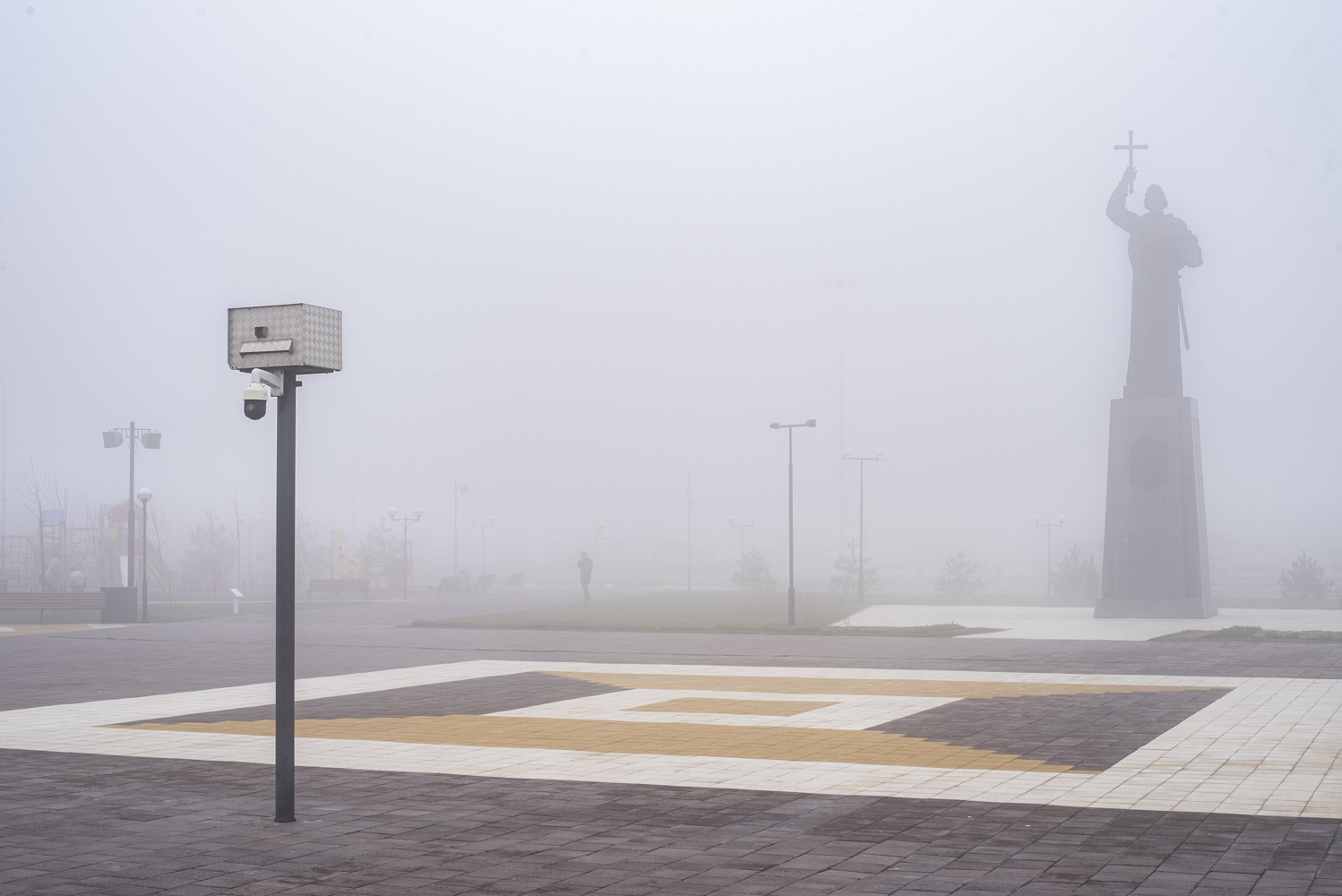 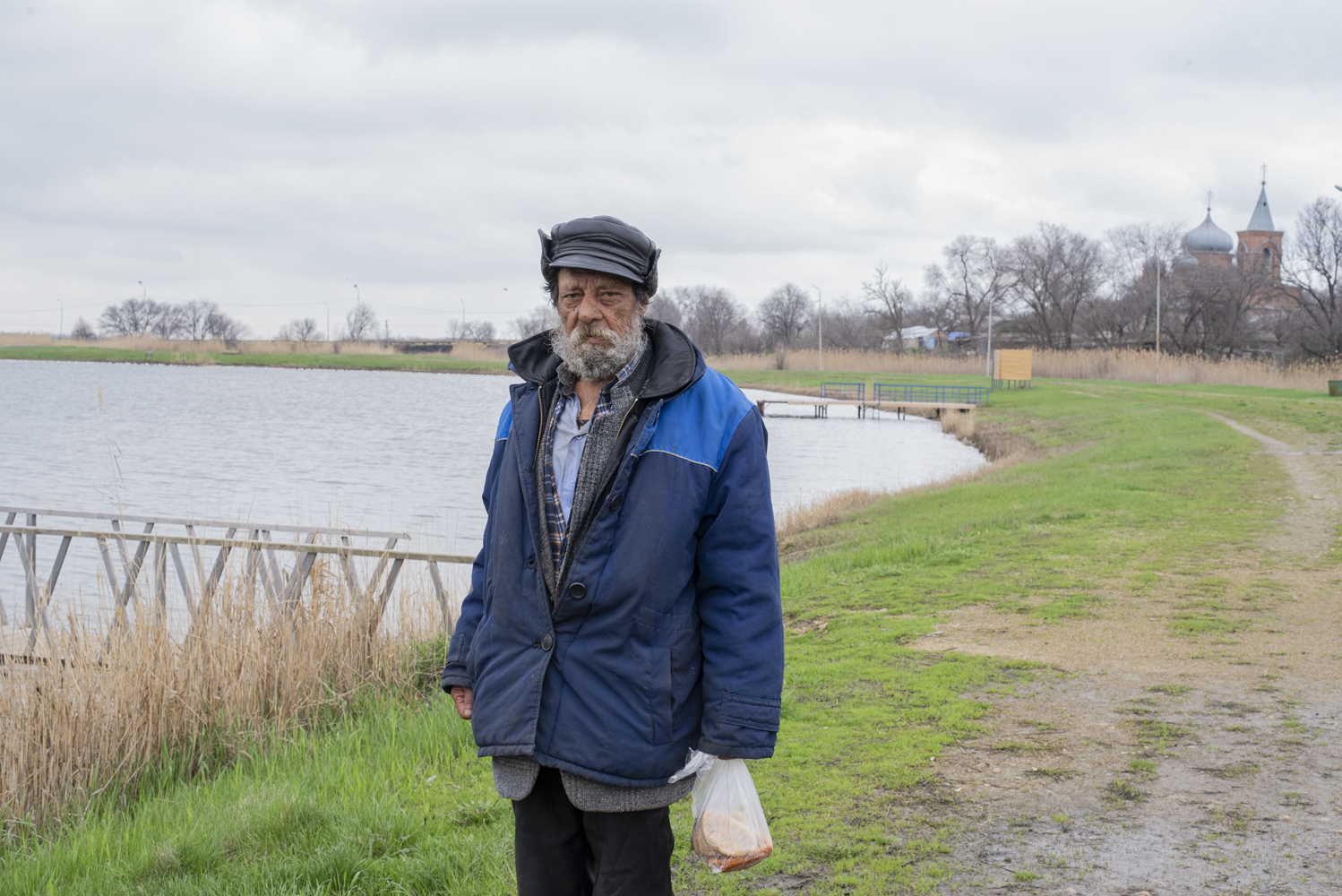 Ivan is 70 years old and lives in Krasnogvardeyskoye. He is retired and is struggling with the monthly pension he receives. The population of Krasnogvardeyskoye has decreased from 15,992 in 2010 to 14,721 in 2020. 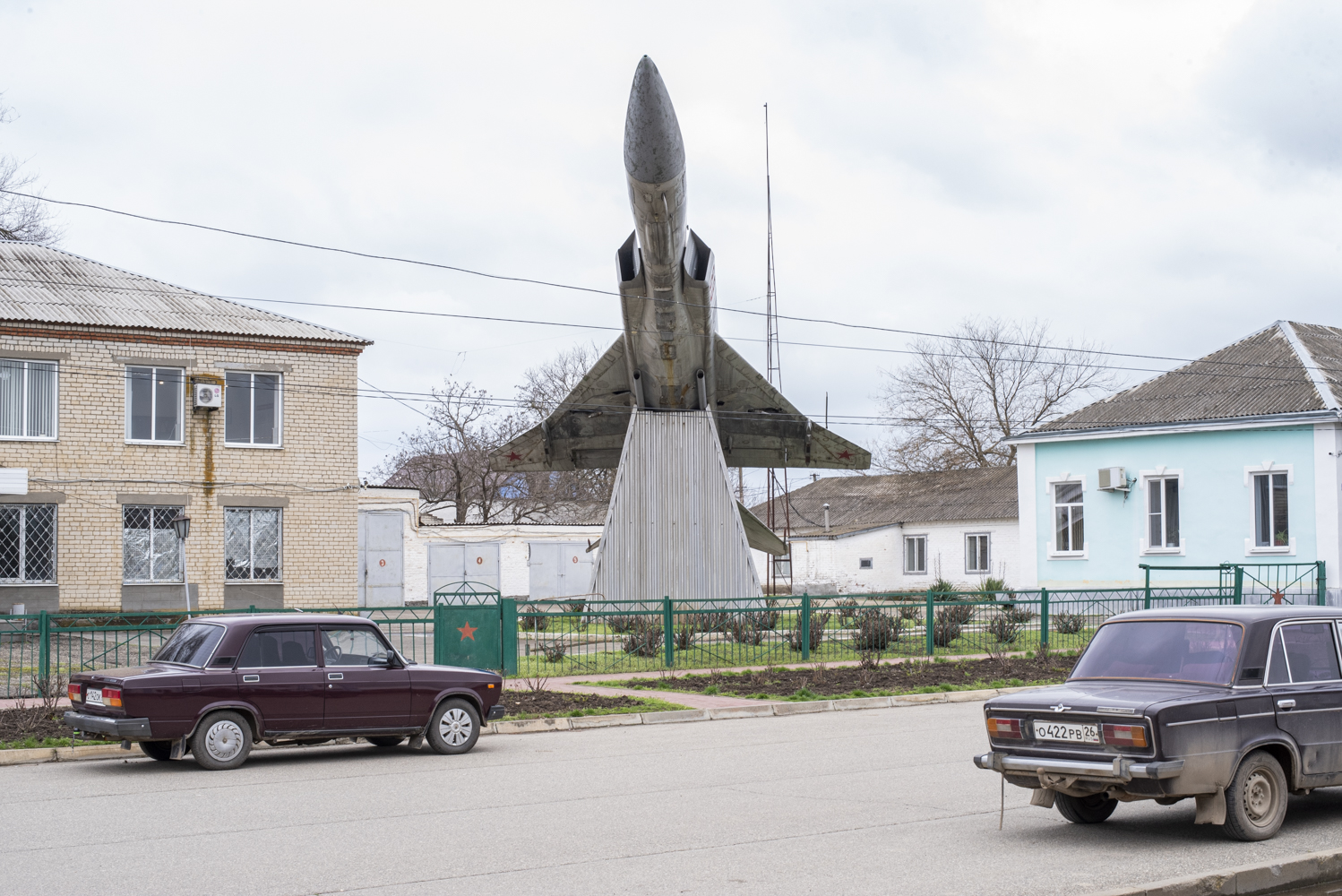 A fighter plane is set as a trophy in the garden of an administrative monument on Lenin Street of Krasnogvardeyskoye. Elements referring to war, used in urban design, are common in villages and towns in Russia, and are emphasizing the past of the Soviet Union. 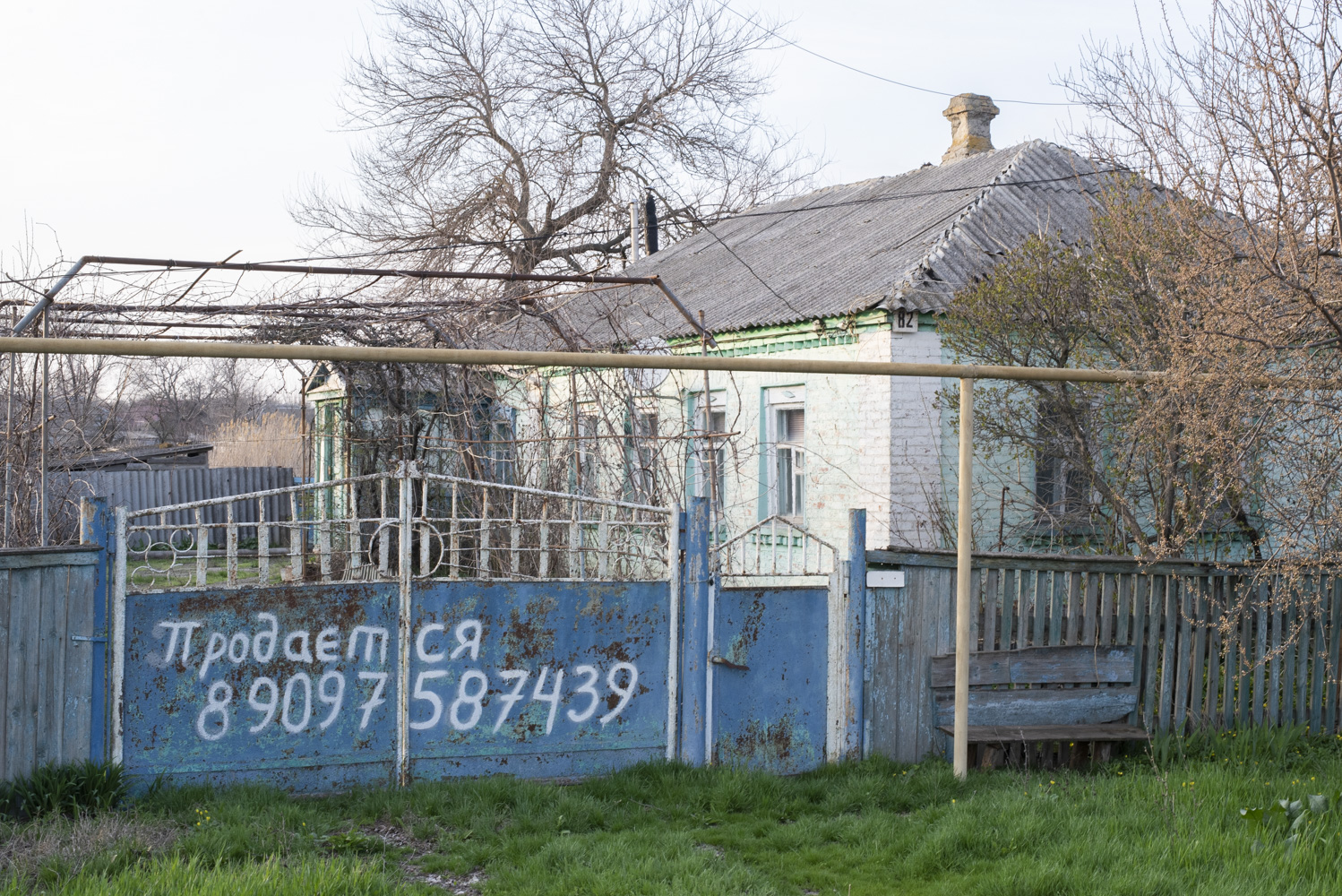 A house is to sell in the main street of Krasnogvardeyskoye. Like many remote towns in Russia, Krasnogvardeyskoye s population is decreasing and the demand for housing is low compare to suburbs like “Perspektivny”. 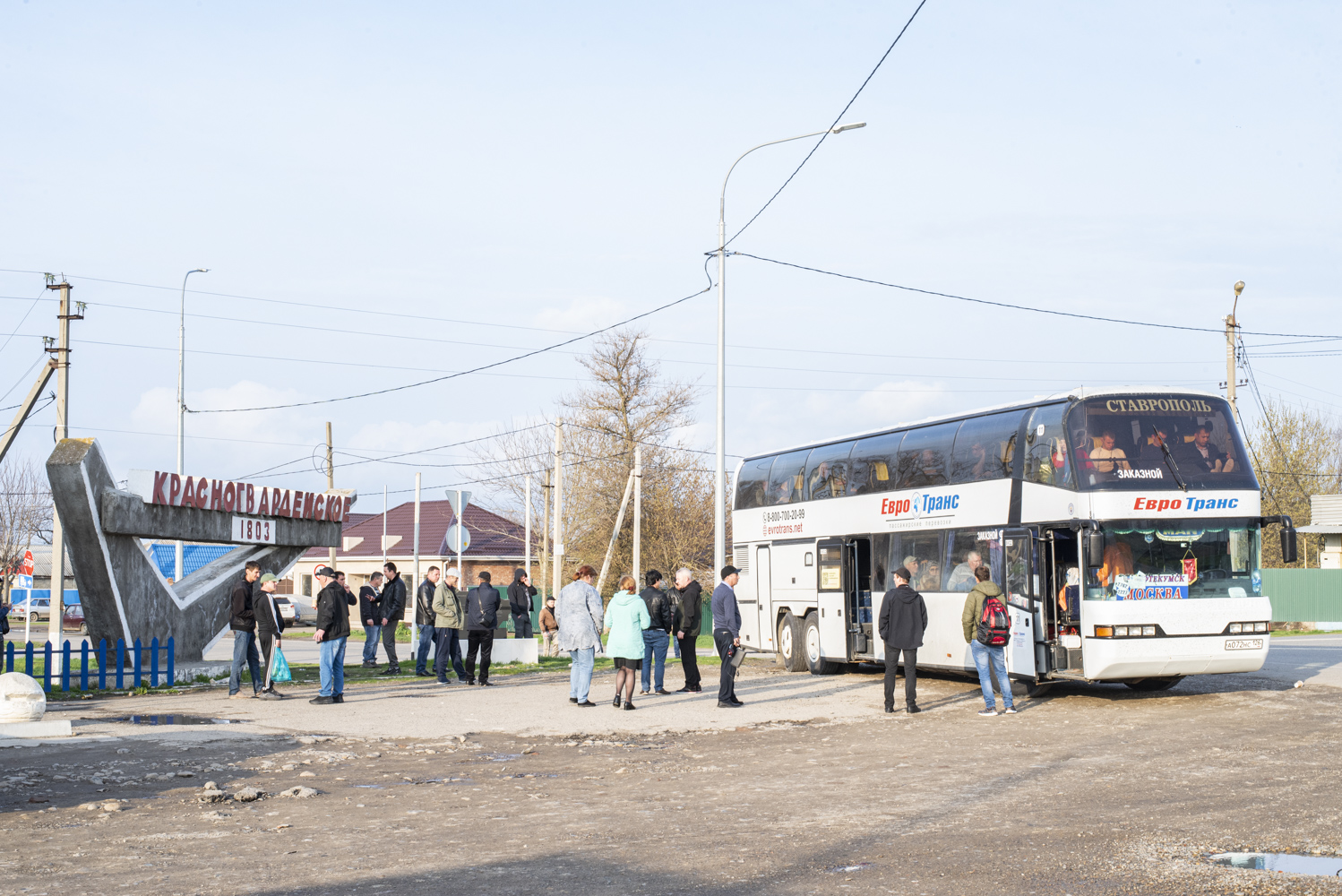 Passengers of a bus between Stavropol and Moscow are enjoying a break at the entrance of Krasnogvardeyskoye s bus stop. Buses, mostly used by young men, represent the opportunity to connect to more economically attractive locations within the region or Russia.