Between five to ten million people chew Khat daily. Most of them are in the horn of Africa. One of the primary production zones of those stems, with similar effects to amphetamines, is situated at the east of Mount Kenya. Even though it’s considered as a drug by the World Health Organization, Khat, dubbed « Miraa », is part of the local traditions, and an important source of income for the Meru region.

Maua is the Kenyan capital of khat production. This small town inhabited by a few dozen of thousand of people is situated in a hilly region near Mount Kenya, in central Kenya. This mid-size rural town is about five hours’ drive from Nairobi, the Kenyan capital. It enjoys an ideal climate and fertile ground for the cultivation of khat trees. Khat stems are constantly regenerating and are all year long harvested. Every day, they need to be delivered to their final customers in a very tight schedule, as the stems should not get dry before reaching their final destination.

The khat producers from Maua are the main suppliers for the Kenyan and Somalian market, which counts millions of daily users. Locals often referred to Khat as a blessing from god. In fact, the entire population benefit from these cash-generating stems. The landowners get comfortable rent, and the daily workers, mostly young men from the region, can enjoy a euphoric high during their hard day at work. Here, the Khat is commonly called the « cash crop » and is a coveted product, which pushes some farmers to use black magic to protect their fields. According to the Meru culture, Khat is mainly harvested and consumed by men. As for women, they are left with more conventional agriculture, such as farming vegetables, and harvesting tea plantations, a heritage from the colonization time in this hilly region.

This activity also has an important local economic impact, as the local government also perceives tax incomes from each car transporting Khat out of town. The Somali community is the main khat consumer, and control the khat supplies outside of Meru county. Through very efficient logistics, its traders can dispatch tons of Khat, towards Mogadishu markets, in less than twelve hours, transporting the harvest to Nairobi through customized pick-up, where it is flown to Mogadishu through chartered planes.

The Somali community is sometimes wrongly associated to the terrorist organization Al-Chebab which organized the recent attacks in Kenya, but in Maua, native people and Somali diaspora are interdependent and are cooperating, sharing the fruits of this cash crop.

Other photo series from Kenya (here). 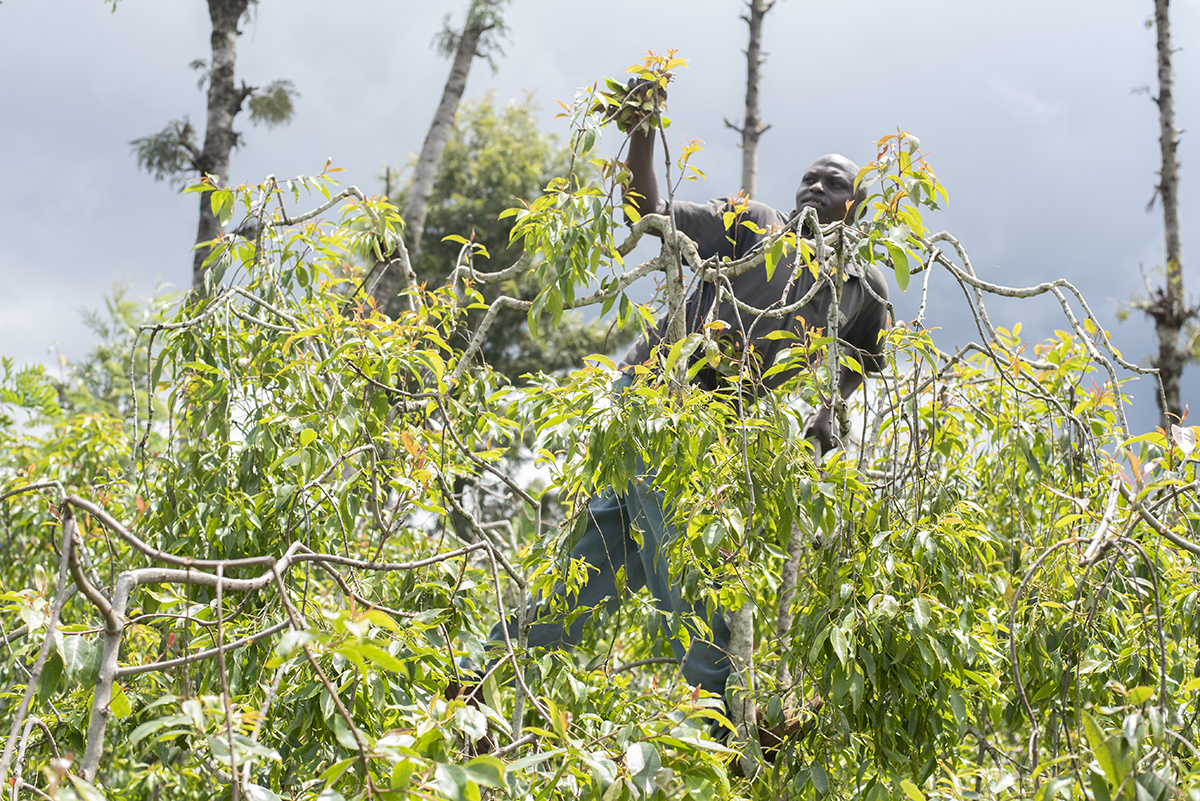 Herbert Kamundi, 37, lives on the heights of Maua town, one kilometre from the city centre, and he is a miraa farmer. He grew up here, in this hilly region, with fertile grounds, close to the equator line. Recently, he inherited a small field where grows around 200 khat trees. Every day, he collects the stems for his own consumption, while, once a month, he harvests the whole field which brings him enough money to take care of his family. 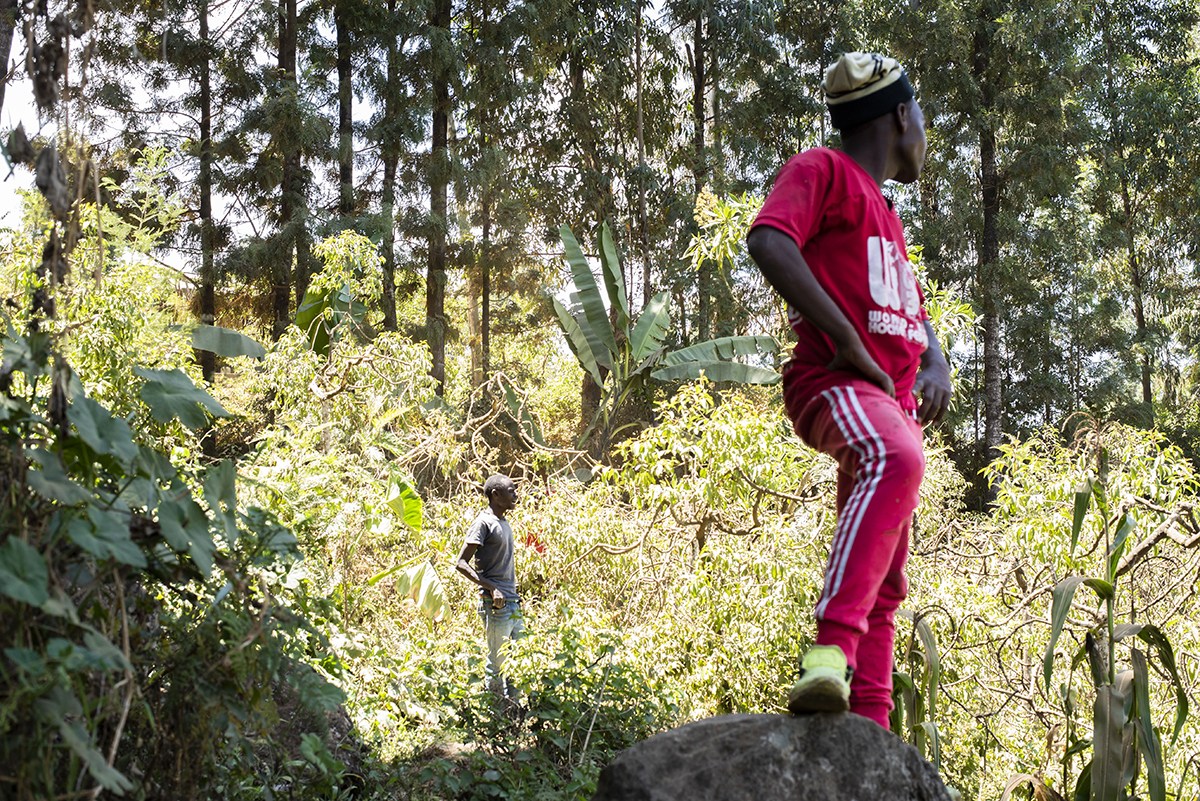 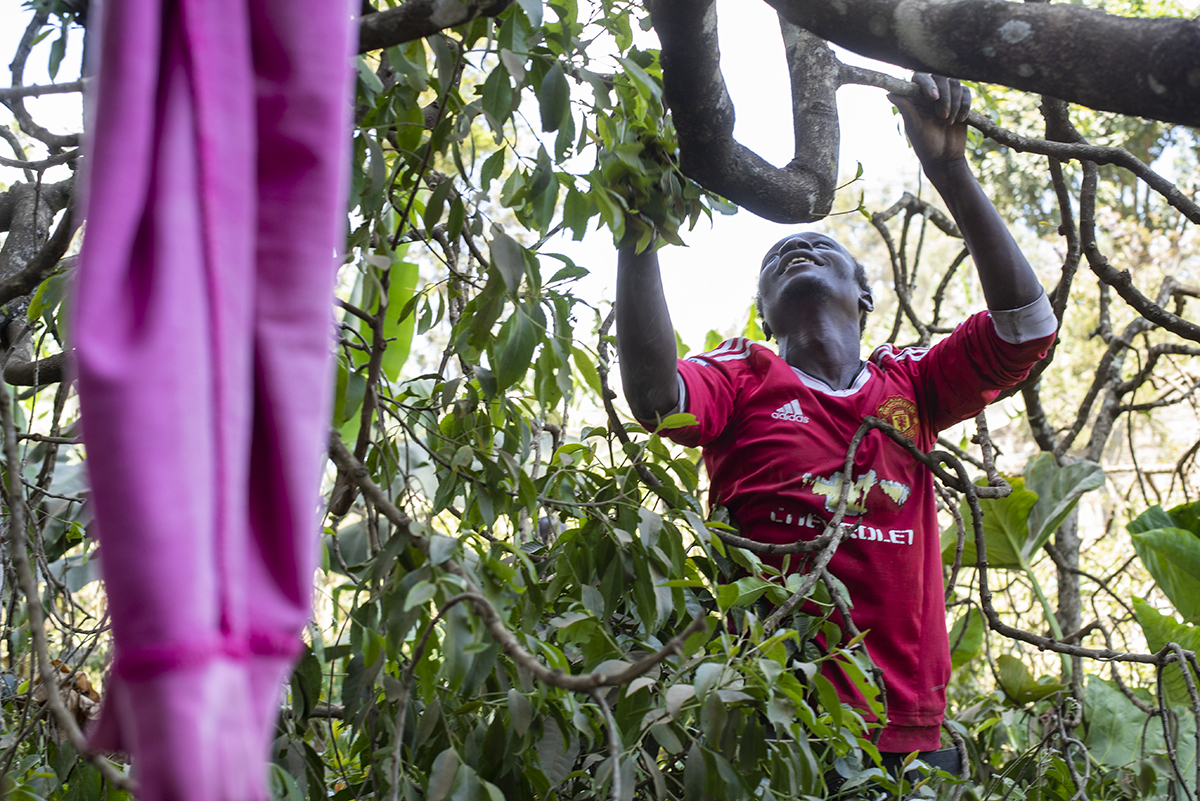 Many of the khat pickers chew khat while harvesting, creating an euphoric mood, and makes the job easier. At the end of the day, the team will wrap up the stems and branches in small packs of 500 grammes. After a few months working in the khat chambers, they don’t need a scale to determine the weight of the packs. Martin, the boss, will sell the harvest in the centre of Maua town. 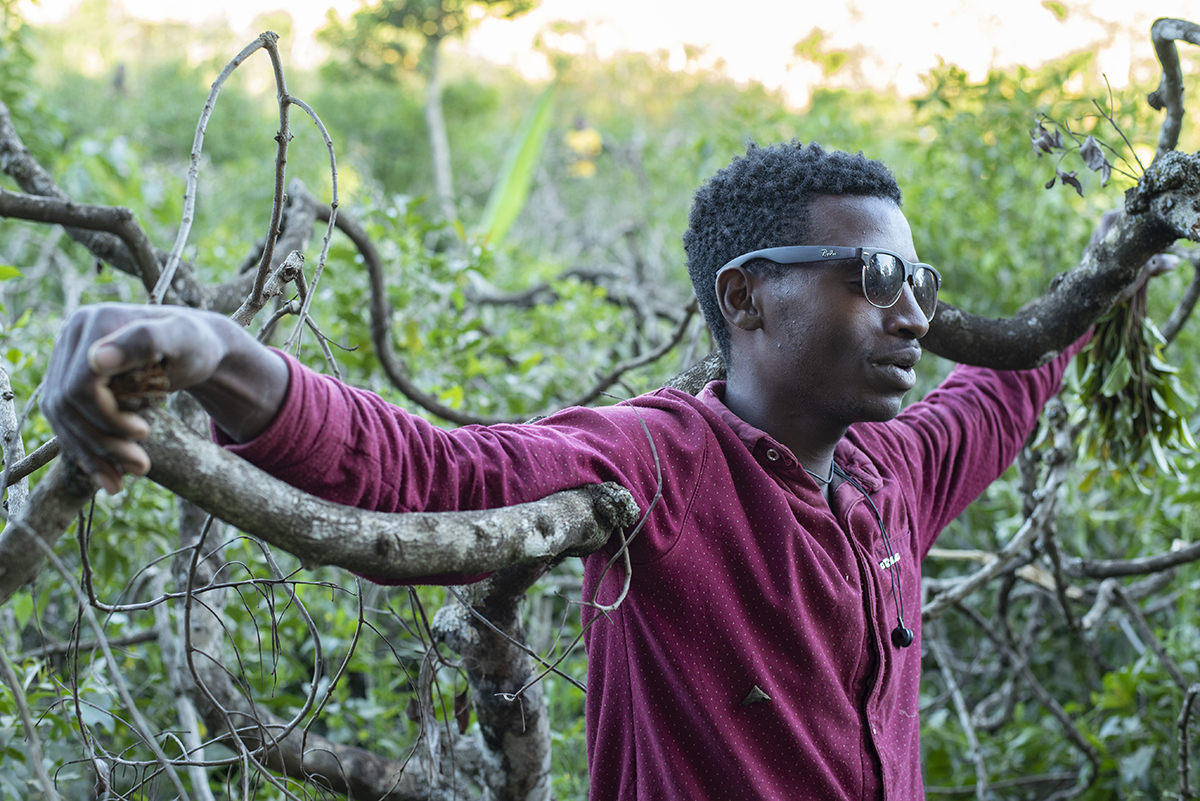 Alex is 19 and just finished high school, and he works as a daily worker to finance his studies. He wishes to go back to University and to become a mecanical engineer. Originally from Maua, harvesting khat is an effective to collect the money he needs. At the end of the day, Alex goes back home with his own bouquets of khat stems, he will then chew with his colleagues. Here, no one questions the addiction of khat, as it is normal to chew it on a daily basis. 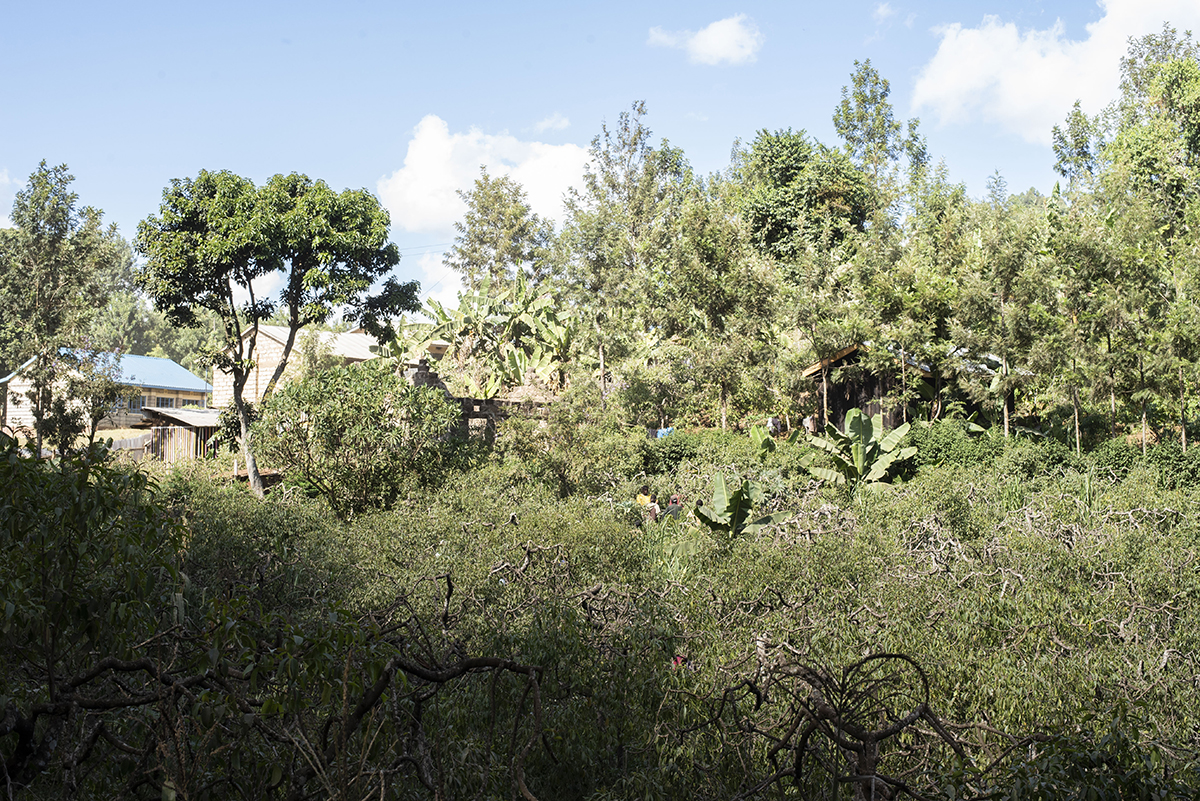 From the khat trees, people consume the stems and the leaves. In the district of Maua, the harvest of khat is happening monthly and consists of taking of the young shoot. To feel the khat, people need to chew the leaves and stems for hours, before an effect, similar to amphetamines appears. The price of khat depends on the seasons and its scarcity, but its harvest is more lucrative than for any other crops in Kenya. 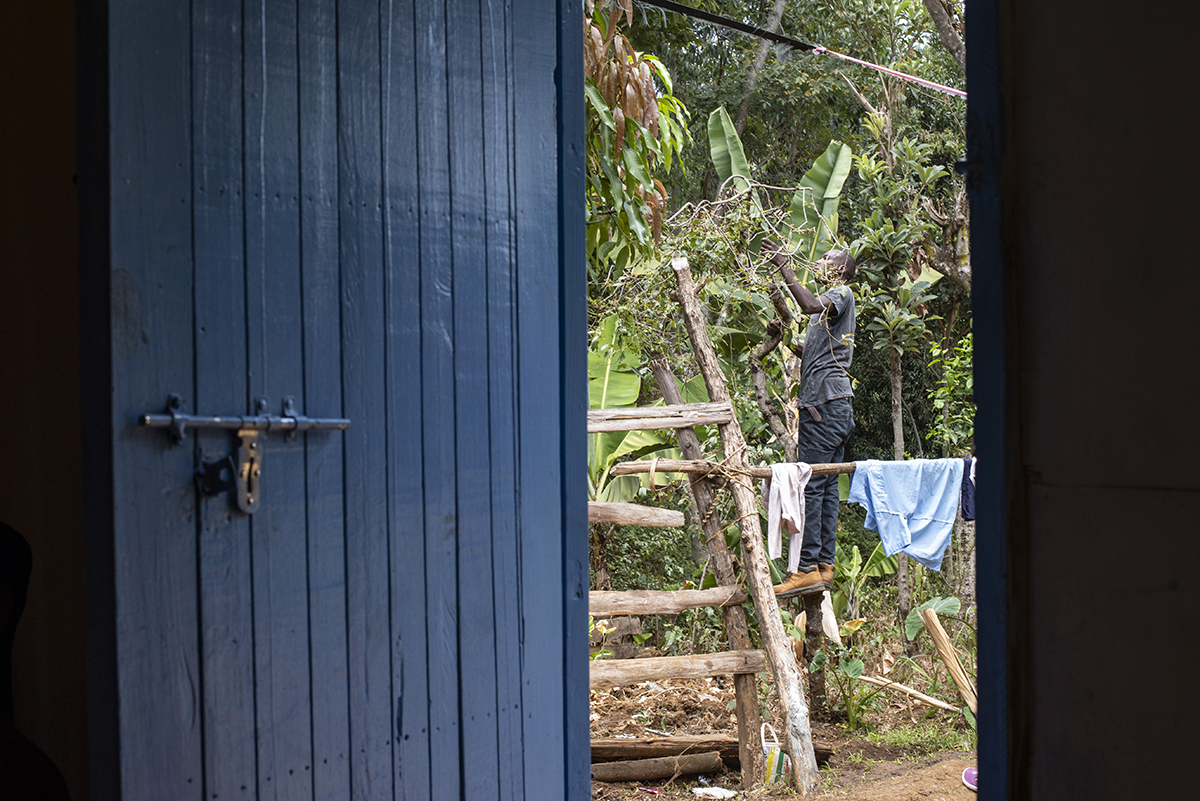 Ibrahim, 29, is the only man in the house. Not much educated, he is taking care of his mother with his two older sisters, who also live in the compound. After a morning working in the field, he is drinking a cup of tea. Tea is part of the British heritage in Kenya. On top of the tea, Ibrahim likes to consume khat during his days. Its euphoric effect kills time. The few trees they have on their farm is not enough to be commercialised, but at least, it fills his personal needs. Ibrahim also drinks alcohol, sometimes made traditionally. Alcohol consumption is an issue Kenyan countryside, and the government tries to forbid illegal distillery. 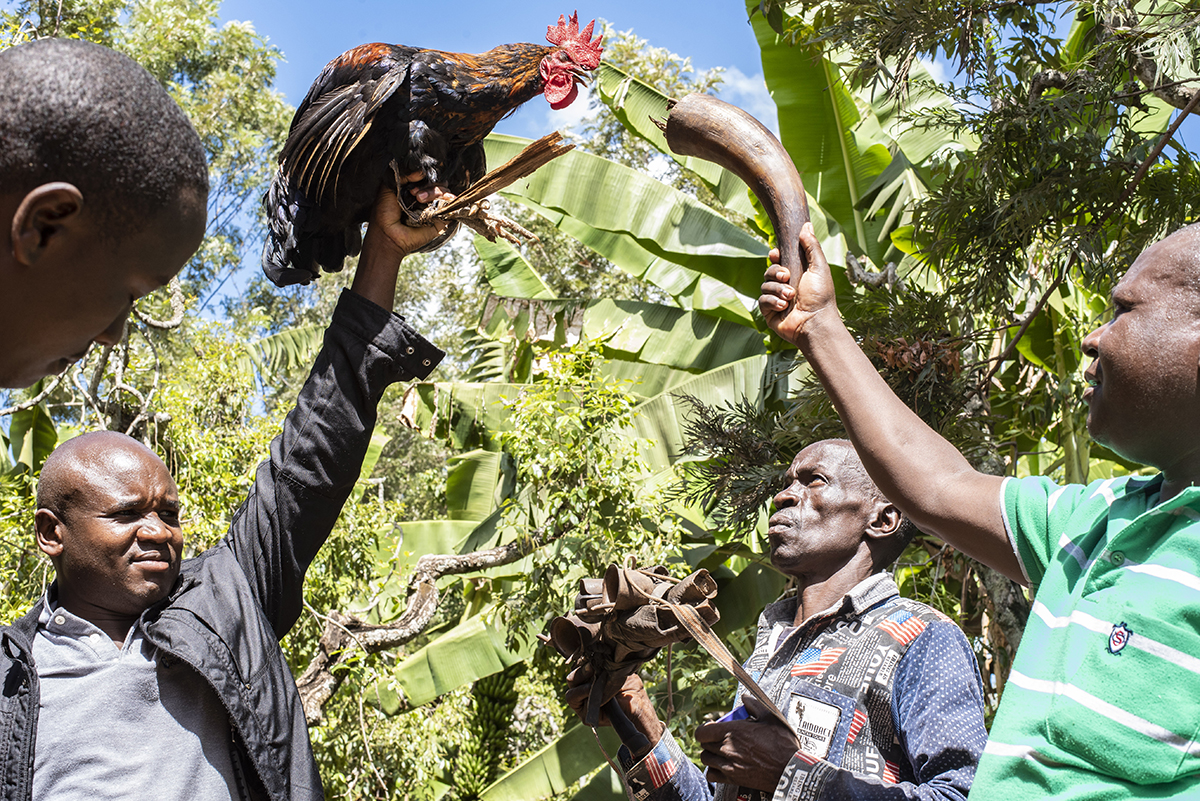 After catching the roster, Robert and two of his 17 servants are proceeding with the traditional ritual, which consists in hypnotising the roster before dropping him on the top of the khat tree. According to Robert, the roster will stay up to twenty, seating on top of the tree, protecting the fields. 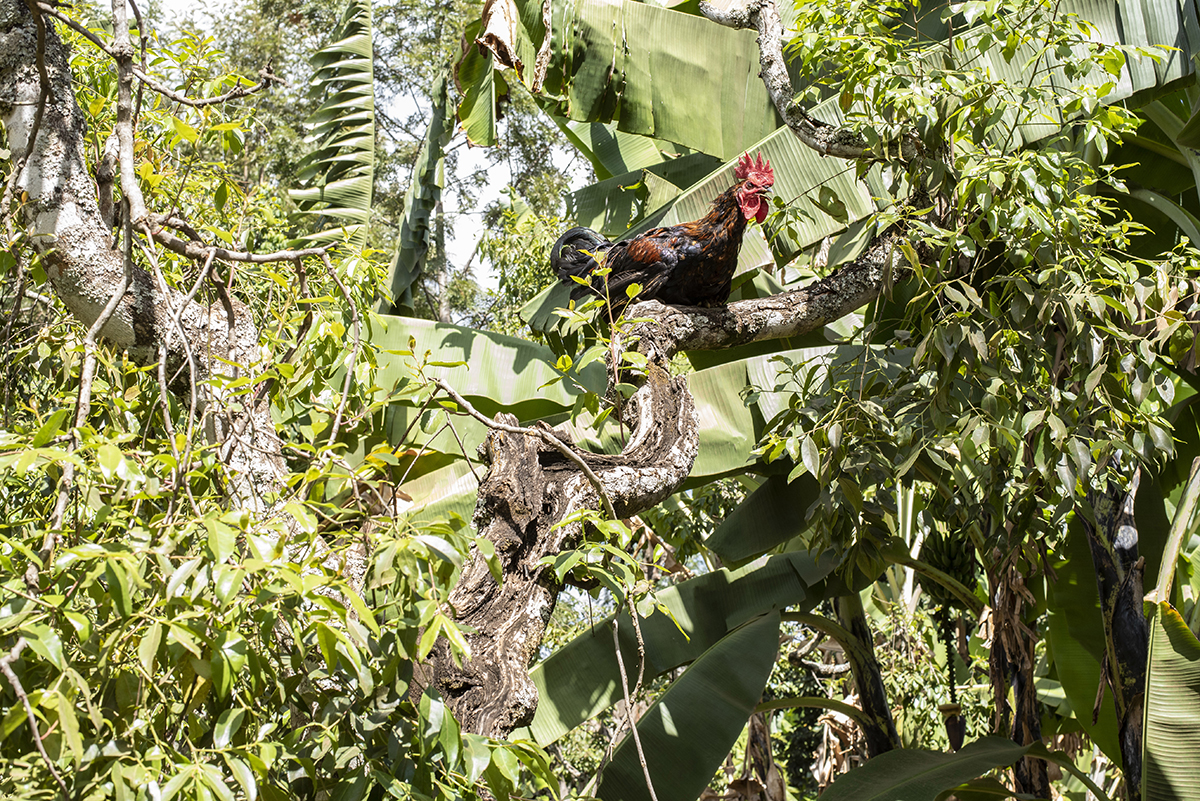 "If a thief enters in a miraa chamber, he or she is caught red-handed, loitering around that miraa. He or she gets crazy until I come here. If he or she is able to pay me, he or she can be freed". According to Robert, once in a protected field, anyone entering illegally will get blocked and will have to pay him a few hundred dollars to get free. Robert pretends to be craved by Kenyan politicians and uses his power to do some secret operations to protect his country. 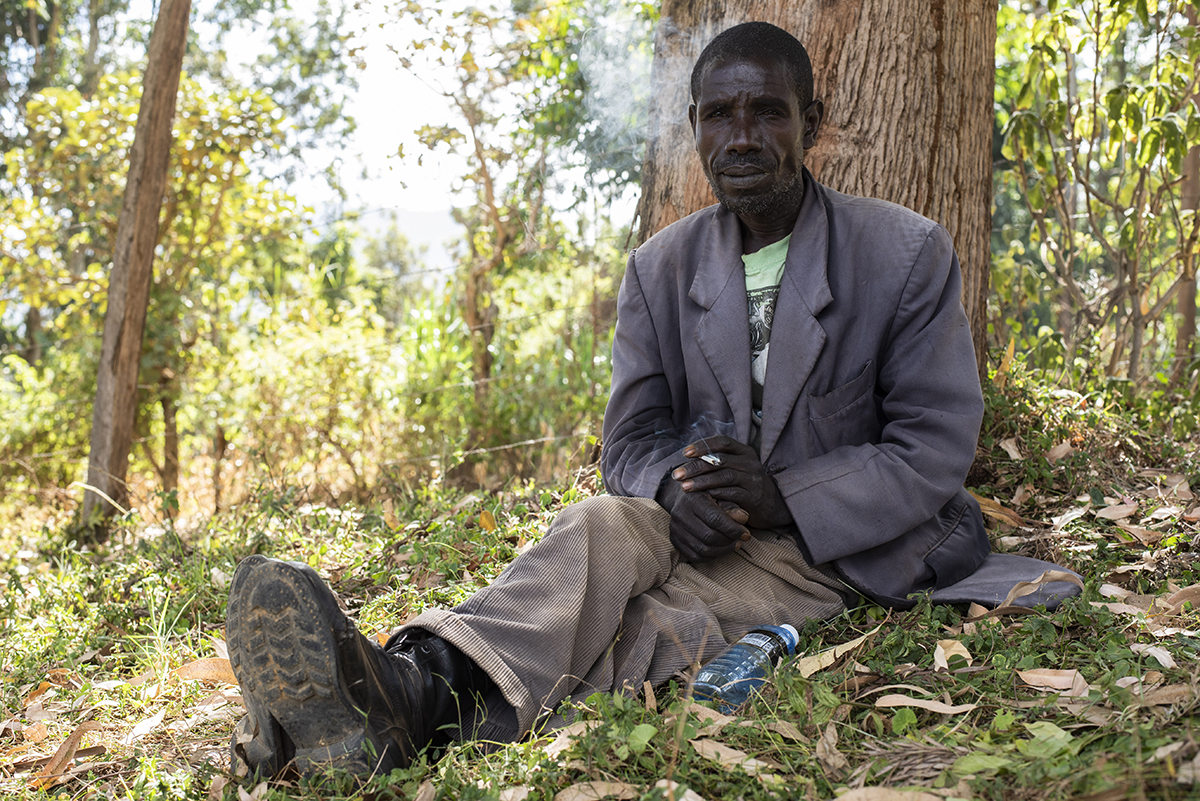 Julius became a witchcraft doctor in 1979, and learn his tricks from the father of Robert Kathata. On top of being a farmer, he offers his services as a witchcraft doctor. When he is being asked, he follows rituals to protect khat fields from thieves. When a thief is getting into a field which has already been protected, he gets blocked in the field. Even though he is pretty convincing, with his falcon totem, Julius is not as successful as Robert Kathat, whom, with his twenty wives, enjoys national fame. 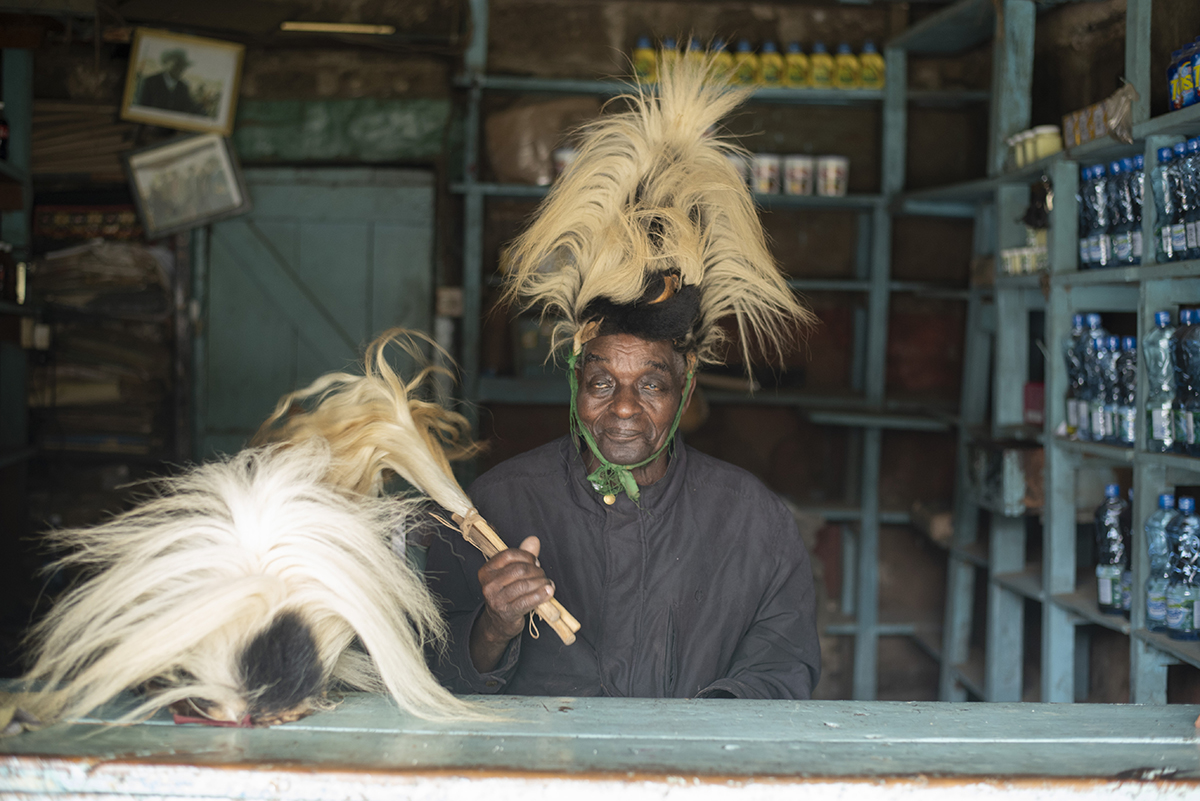 Paul is 87 and has forty-three sons and eight wives. He is posing with his traditional hat made out of colobus monkey. Unlike most of the people in Maua, he never consumed khat. According to many people from Maua, khat cannot be a drug as it comes straight from the tree. 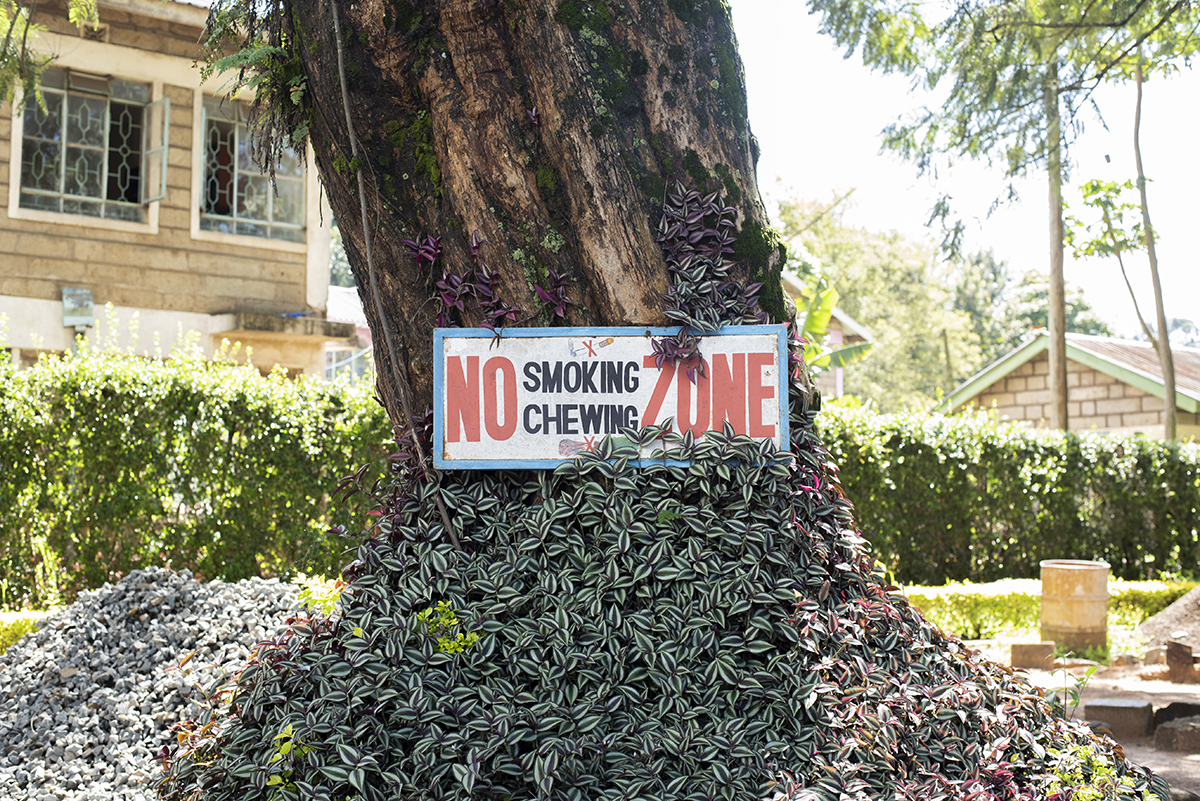 In the parking of the Maua Methodist hospital, a sign is indicating that chewing on the premises is forbidden. The Methodist church is significant in this part of Kenya, as the first mission opened in Meru town (the capital of the district) in 1912. 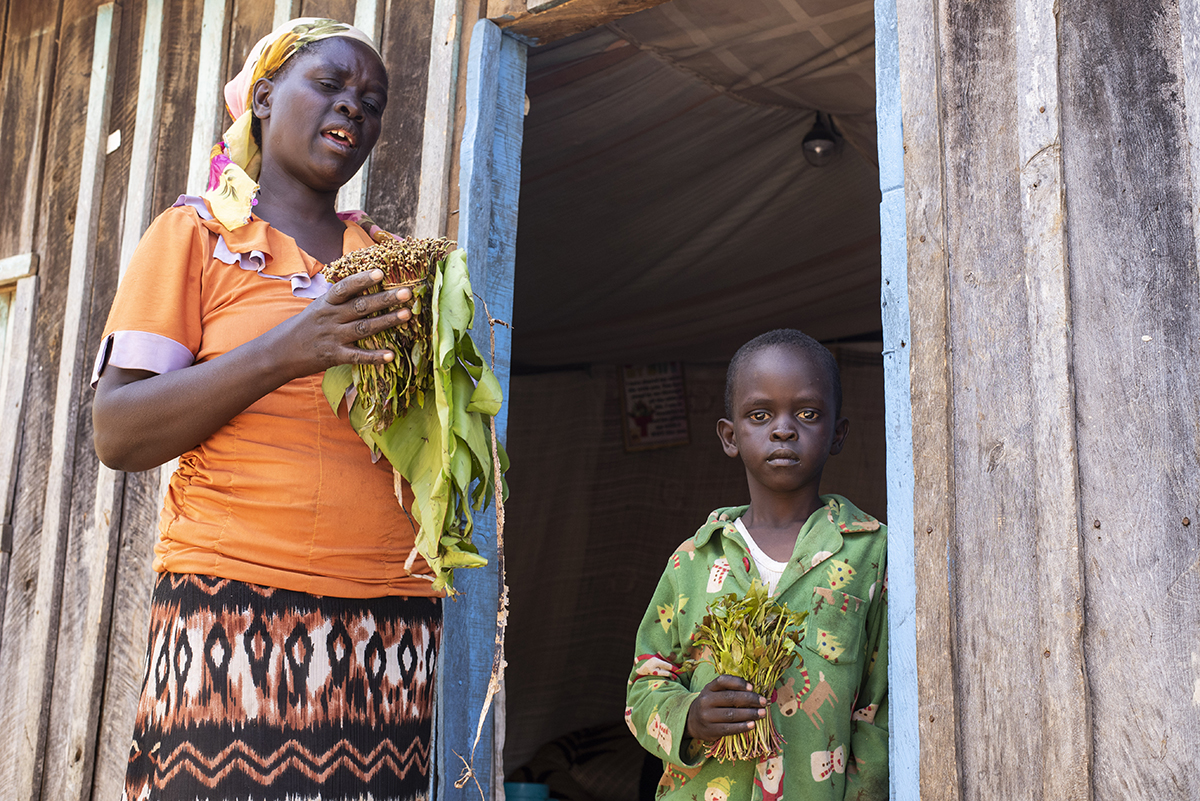 Grace is 40 lives and is one of the rare women who sells khat. Her husband is a polygamist and has another wife. He has khat fields but would never leave Grace harvesting his field. First, she would have to buy it from him. Next to her, her son, Samson, who is following her in her business. 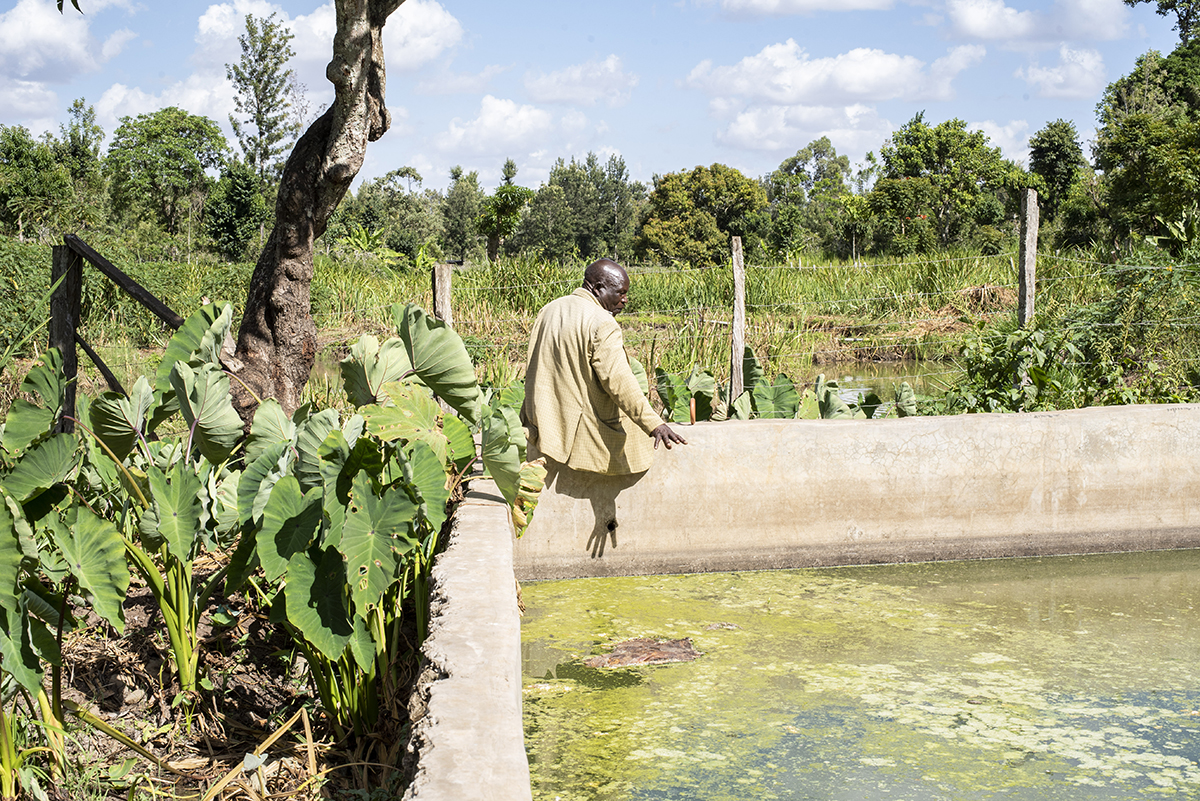 Nahason was born in 1950 and started planting khat in the 70's, when khat was worthing nothing, as no jeep were supplying khat outside of Maua. From 1974, the first jeep routes have diversified the demand in khat, which was now consumed all over Kenya. From 1996, the daily flights to Europe contributed to the dramatic increase in the price of Khat, until the British authorities decided to forbid it a few years back. Still, khat brings Nahason comfortable incomes every month but lately decided to diversify his business in fish farming. 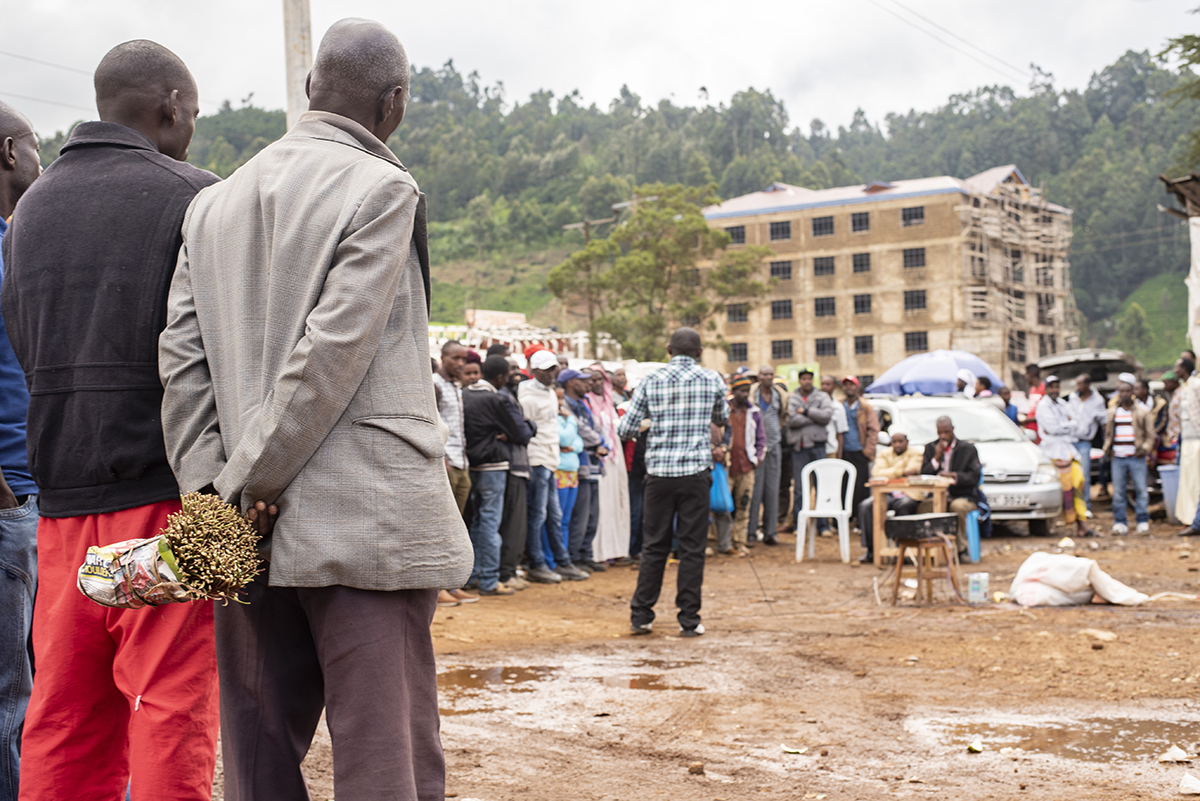 During ramadan, every afternoon, on the main street, Muslim preachers and pastors from different evangelical churches are debating about religion. One of the dwellers is carrying a pack of khat he just bought. 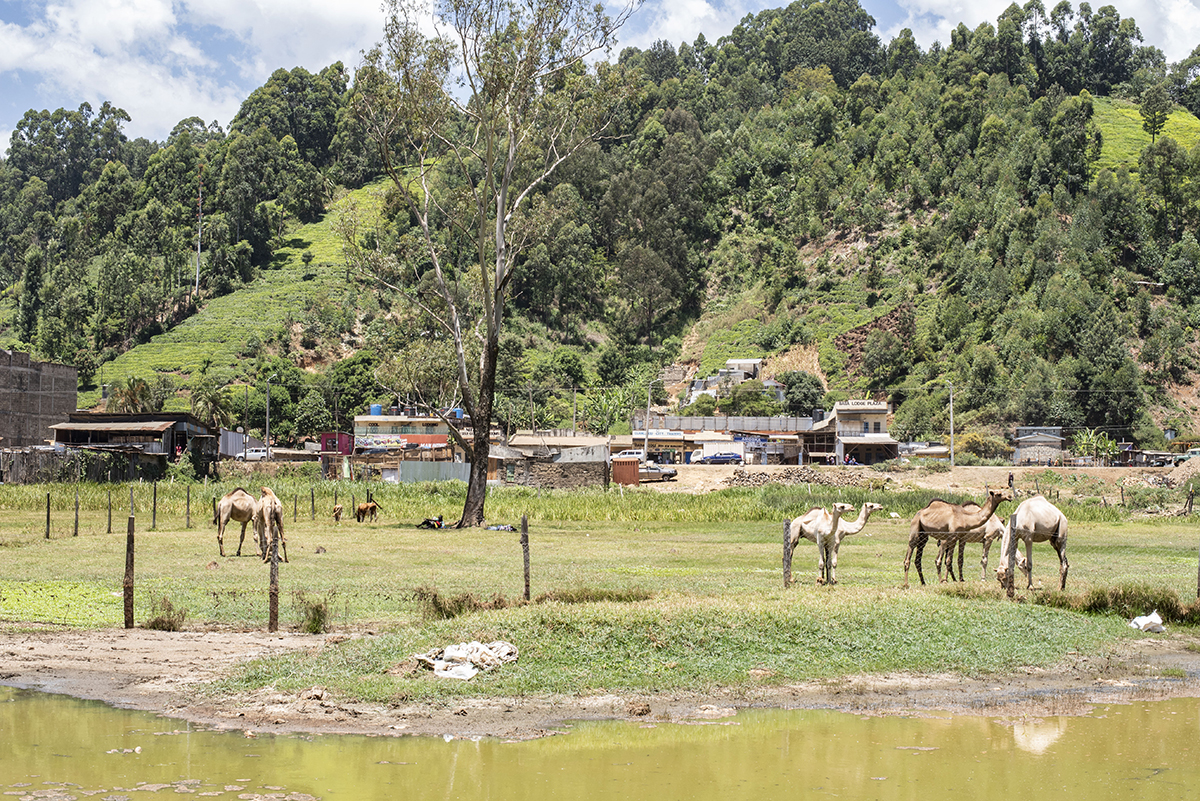 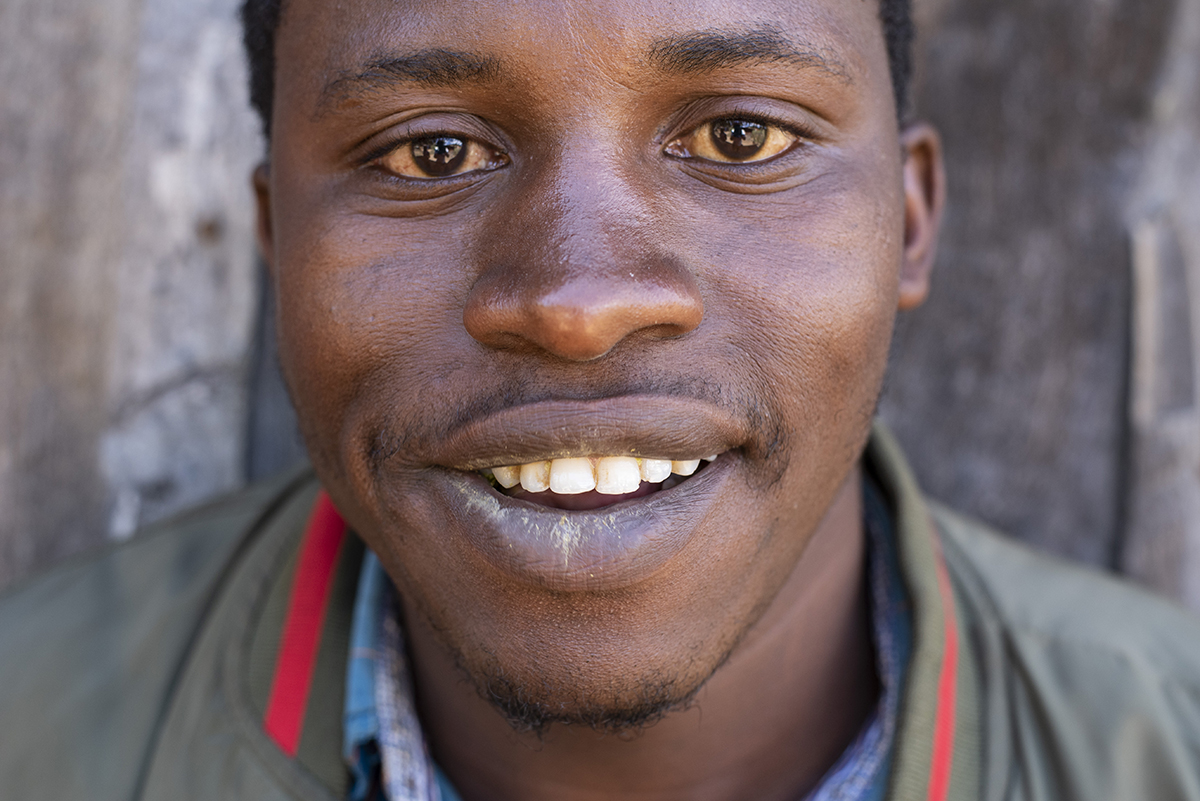 Eric is 23 years old and has studied criminology in Nairobi, the capital of Kenya. He now works for the local court. During his free time, he loves to chew miraa (khat). 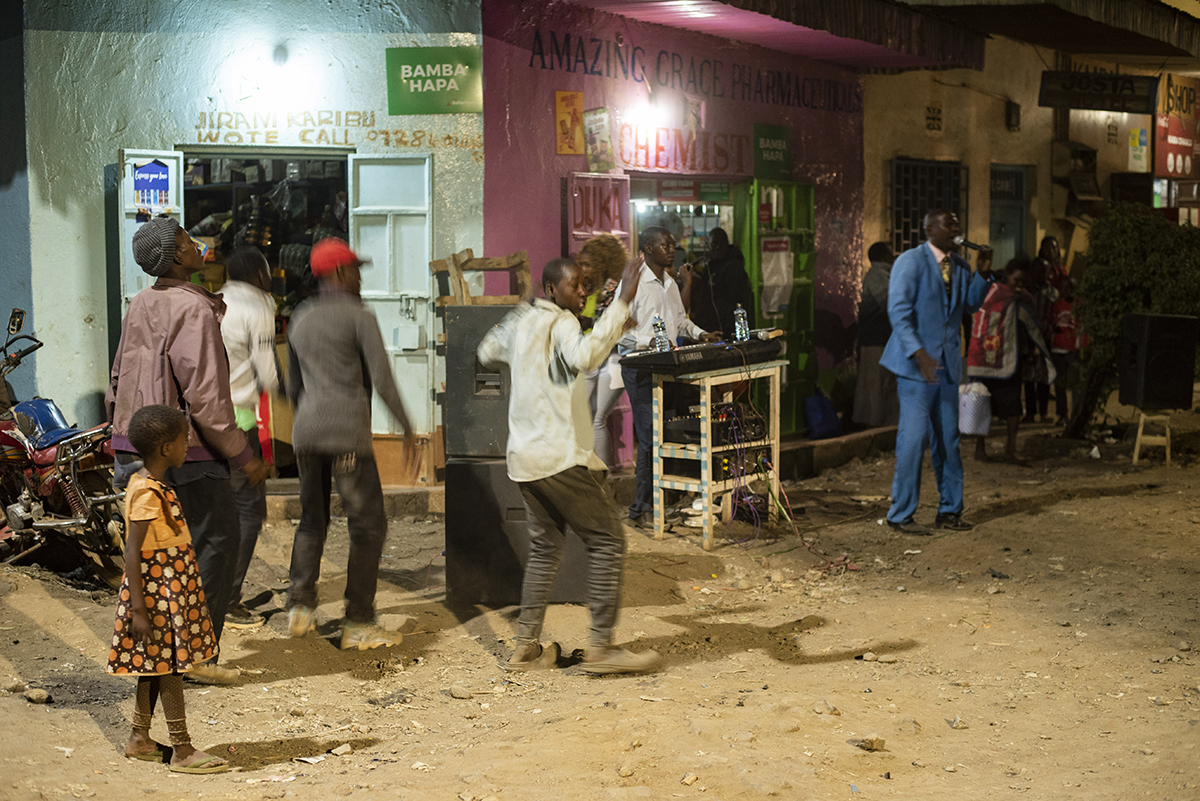 Like everywhere in Kenya, an evangeslist pastor is preaching in a street. Youth, euphoric due to Khat, are dancing listening to his preach. 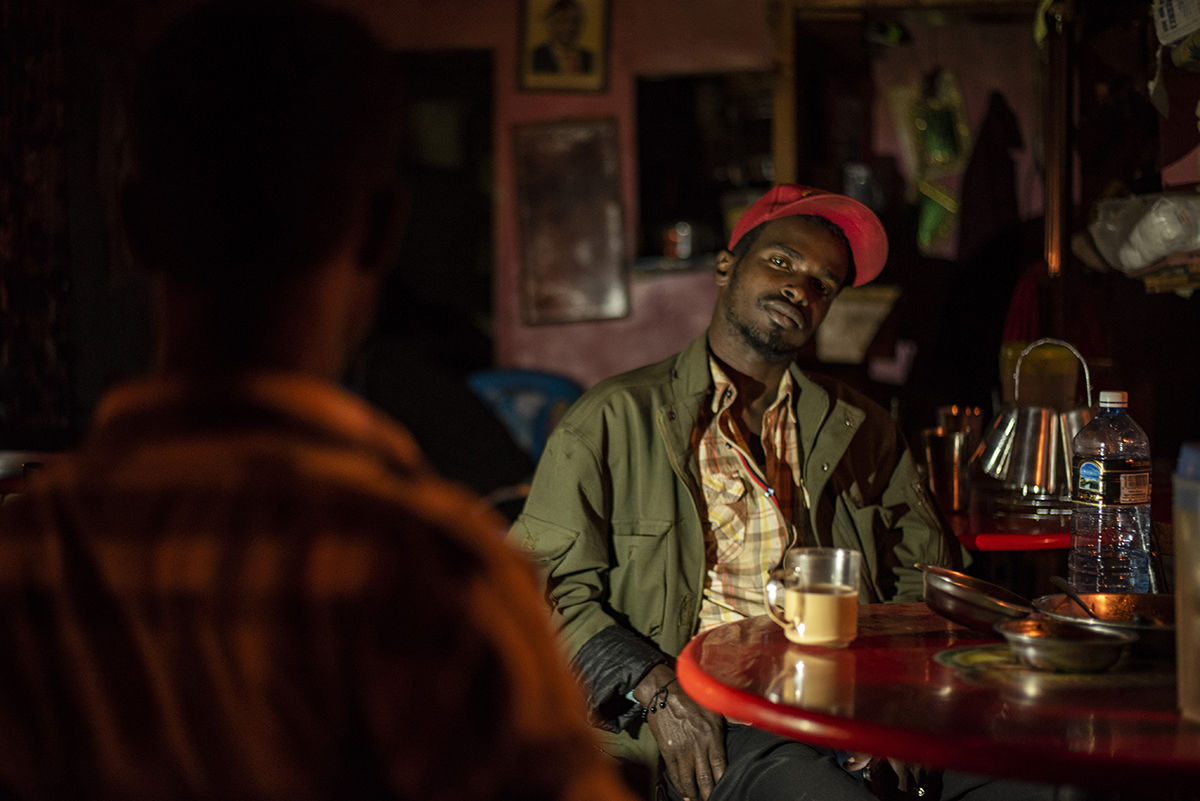 Fuad comes from Nairobi every day, almost 300 kilometers to supervise and monitor the transport of the khat loads. Just before taking the road, he enjoys a tea in one of the many somali restaurants of Maua. 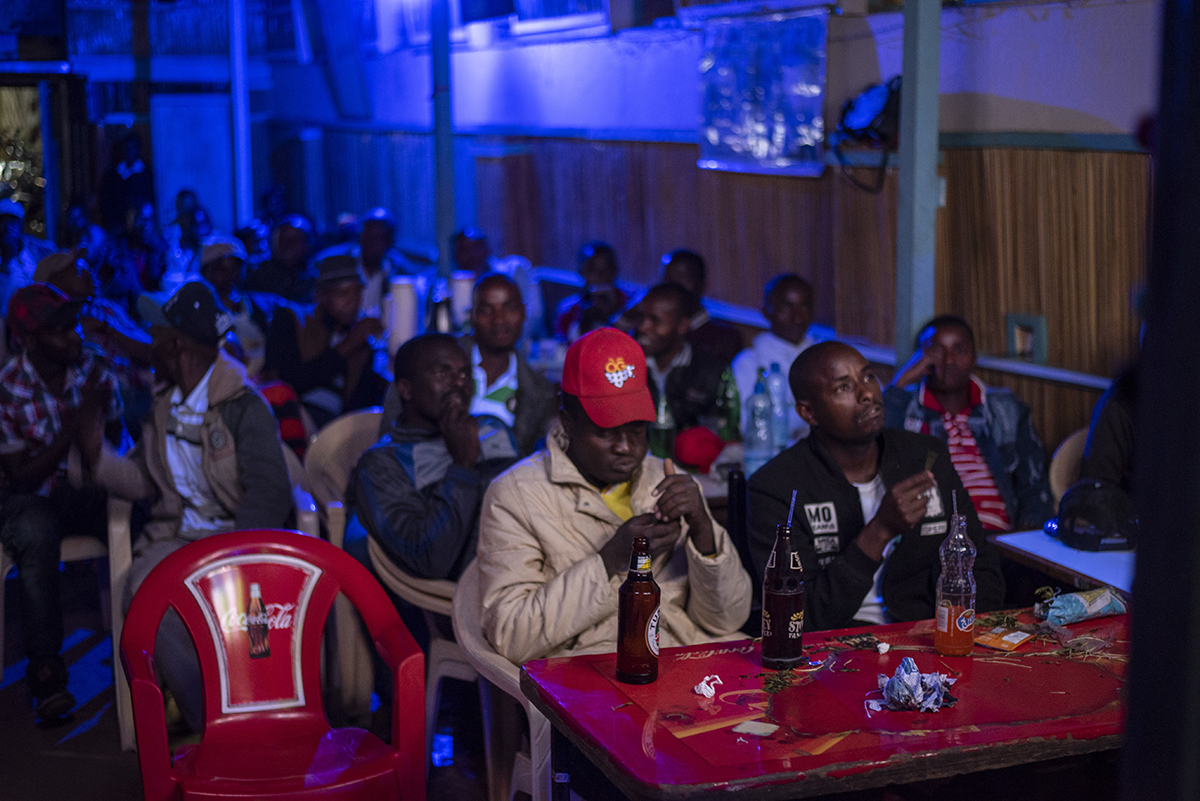 Like everywhere else in Kenya, the youth like to gather in bars to watch football games of the English premier league. Whereas everywhere else alcohol is predominant, here, everyone is satisfied with khat, and a cup of tea, to make the chewing easier. 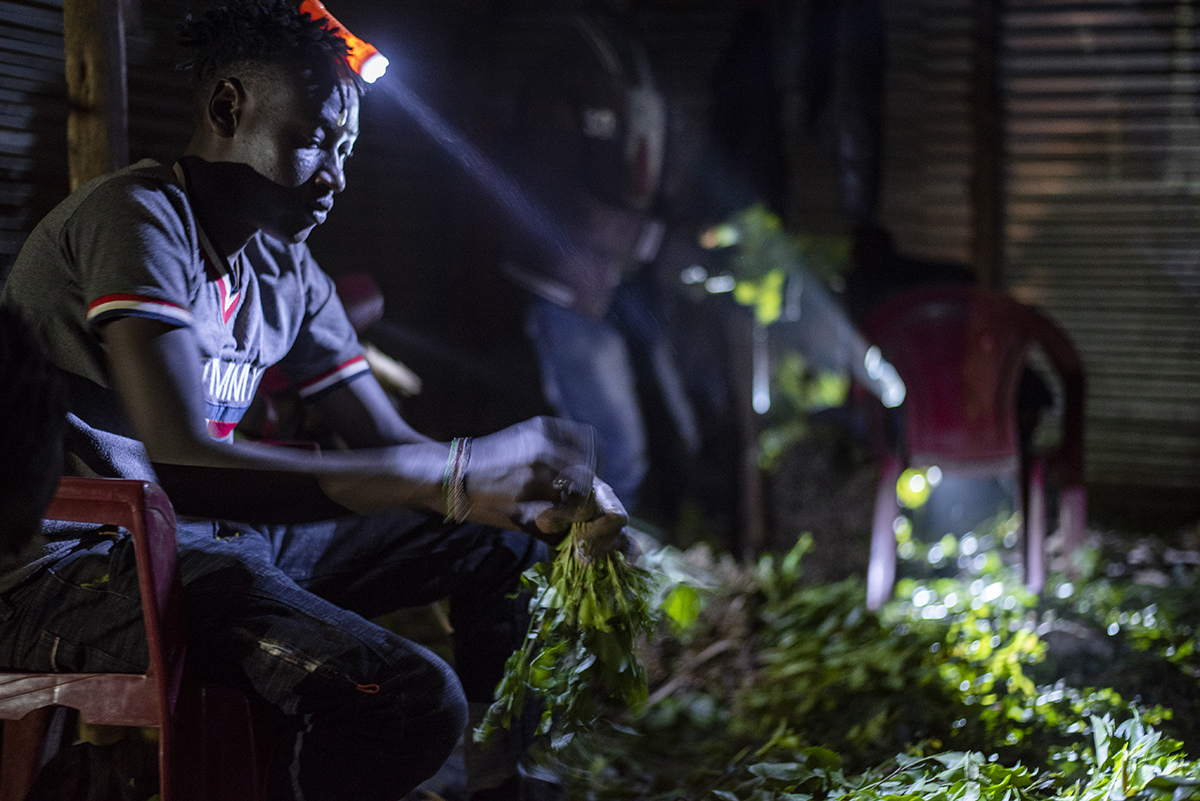 A young man is selecting and packing the stems of khat he and his team just harvested. The 390 kilos of cash crop they just gathered will be sold to Somali traders, and transported to Nairobi within few ours. Despite the power cut, the work is going on, as the bags as to be ready as soon as possible. 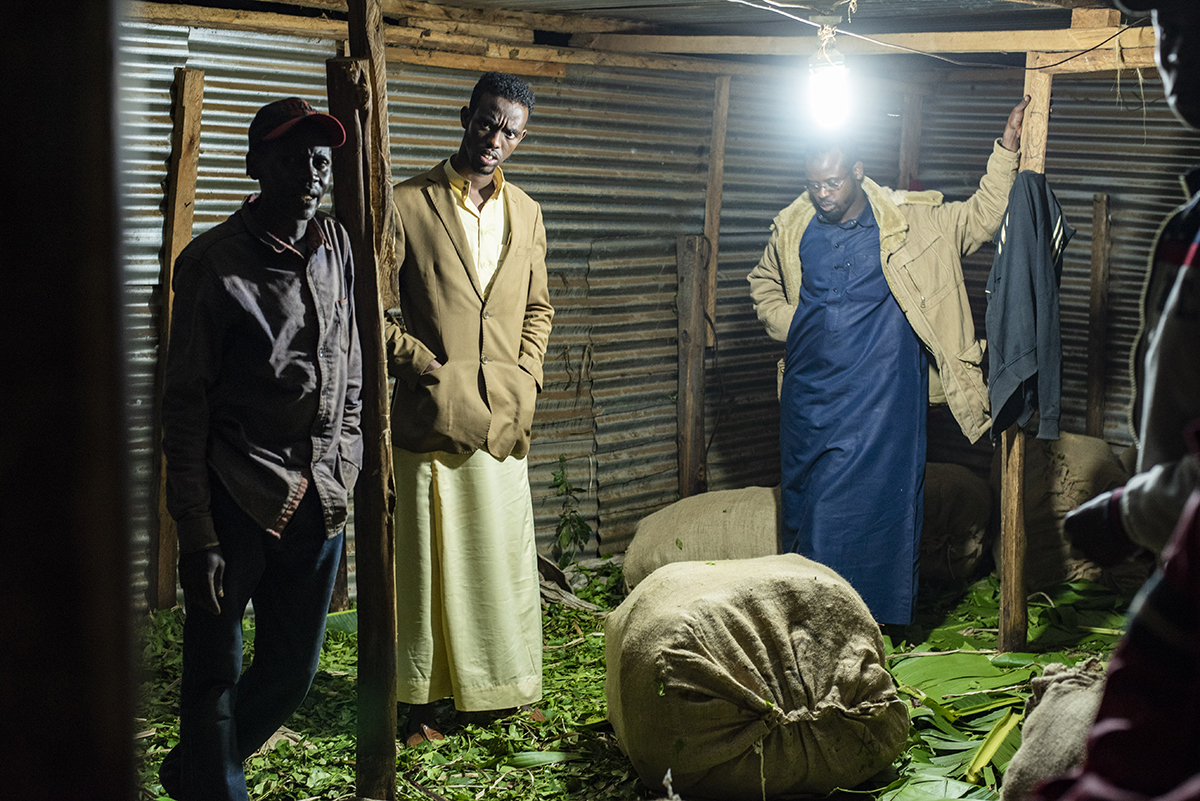 Each of these bags weights around 40 kilos. Dubane, a trader from the Somali community and his business partners buy a kilo for 8 dollars, at a whole-seller price, and they will sell it at 11 dollars a kilo. Tonight, they expect to make a 1,200 USD profit. 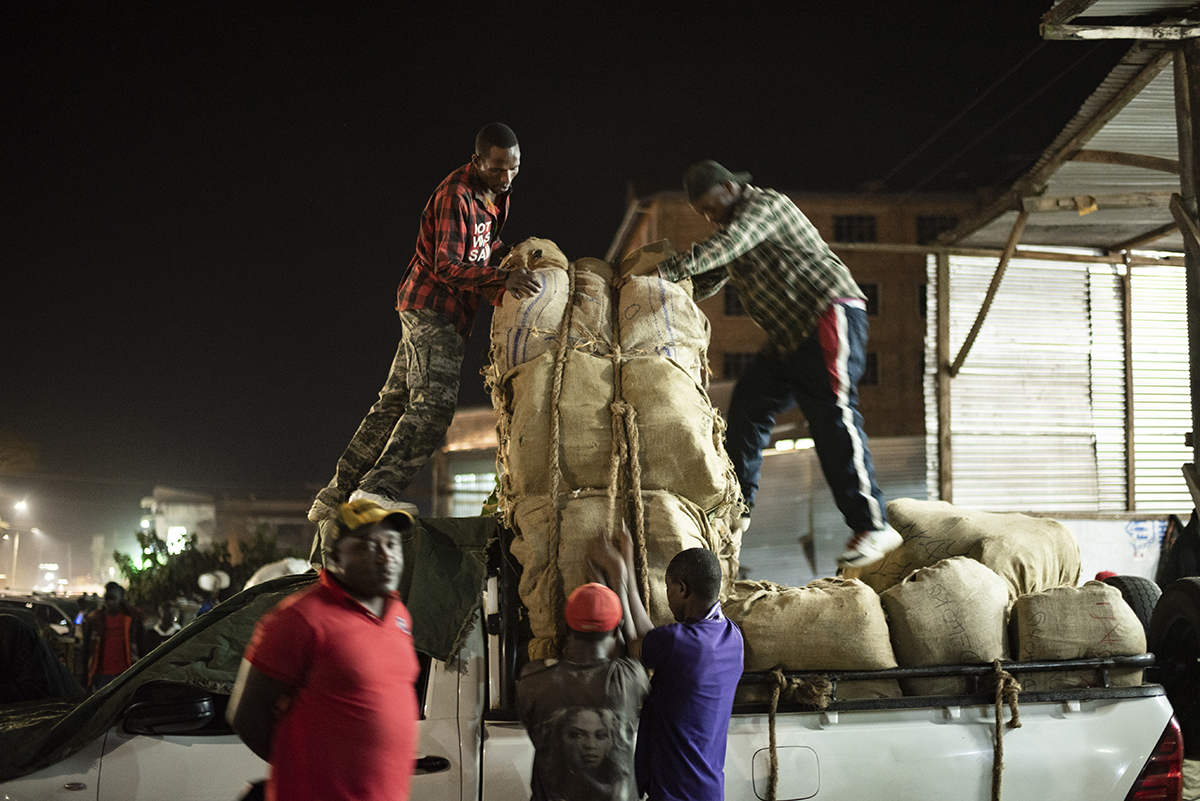 To maximise the loading capacity, the Toyota Hilux heeps are cusotmized to be overloaded with khat. Whereas the maximum loading capacity is 1,2 tons, they usually transport up to 2,5 tons. Harvested in the afternoon, packed during the evening, the khat will be delivered at Nairobi airport during the night. 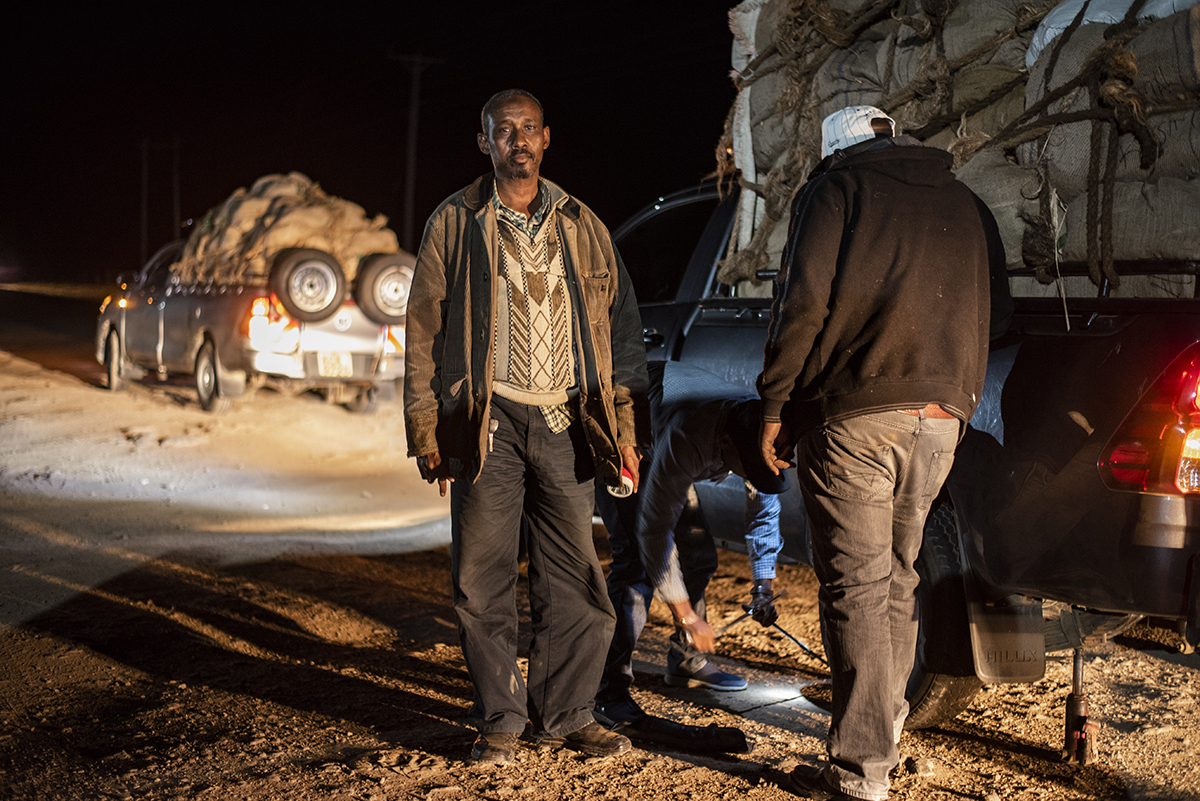 Usman is a jeep driver and has been driving daily between Nairobi and Maua for the last 25 years. It will take him slightly more than three hours to reach the international airport of Nairobi, whereas the average journey takes around 6 hours. Once at the airport, the khat will be loaded in a plane, specially chartered to transport the Kenyan cash crop to Somalia. This business is the result of an intense collaboration between local farmers and traders from the Somali diaspora; the khat is an essential economic resource for the Maua region.