Marais Poitevin, a territory in danger.

The second-largest Marsh in France after the Camargue, the Marais Poitevin covers 100,000 hectares, between the bay of Aiguillon at the gates of the city of Niort (west of France), at an altitude of between 0 and 8 meters above the level of the sea.

Its 8,000 kilometers of waterways are the result of centuries of determined human work on its environment. Its development began under the leadership of monks nearly a millennium ago and took on a whole new dimension when King Henry IV called on Dutch investors specializing in land reclamation in the 16th century. Its fertile land and abundant water resources have made it a suitable space for agriculture and livestock. From the 1970s, agricultural mechanization moved farms to the plains, on the outskirts of the Marais, while the development of tourism allowed the enhancement of this exceptional site with a unique heritage.

However, this idyllic territory, which welcomes one million four hundred thousand tourists every year, and has an extremely rich flora and fauna, is threatened. According to some projections, based on IPCC reports, the rise in sea level caused by anthropogenic global warming could submerge certain areas of the Marais.

In addition, the increase in the frequency of extreme weather episodes, such as storms (advancement of seawater in freshwater areas) or droughts (drying out of water tables) could upset the delicate balance necessary to the survival of the Marais.

Finally, other more concrete threats, with the proliferation of basins, vast areas of several hectares that are used to store groundwater water, intended for the cultivation of corn at the expense of the Marais, weigh in the medium-term risk of a faster drying up of this wetland, nicknamed « the green Venice ».

A short drone video about the Marais poitevin (here). 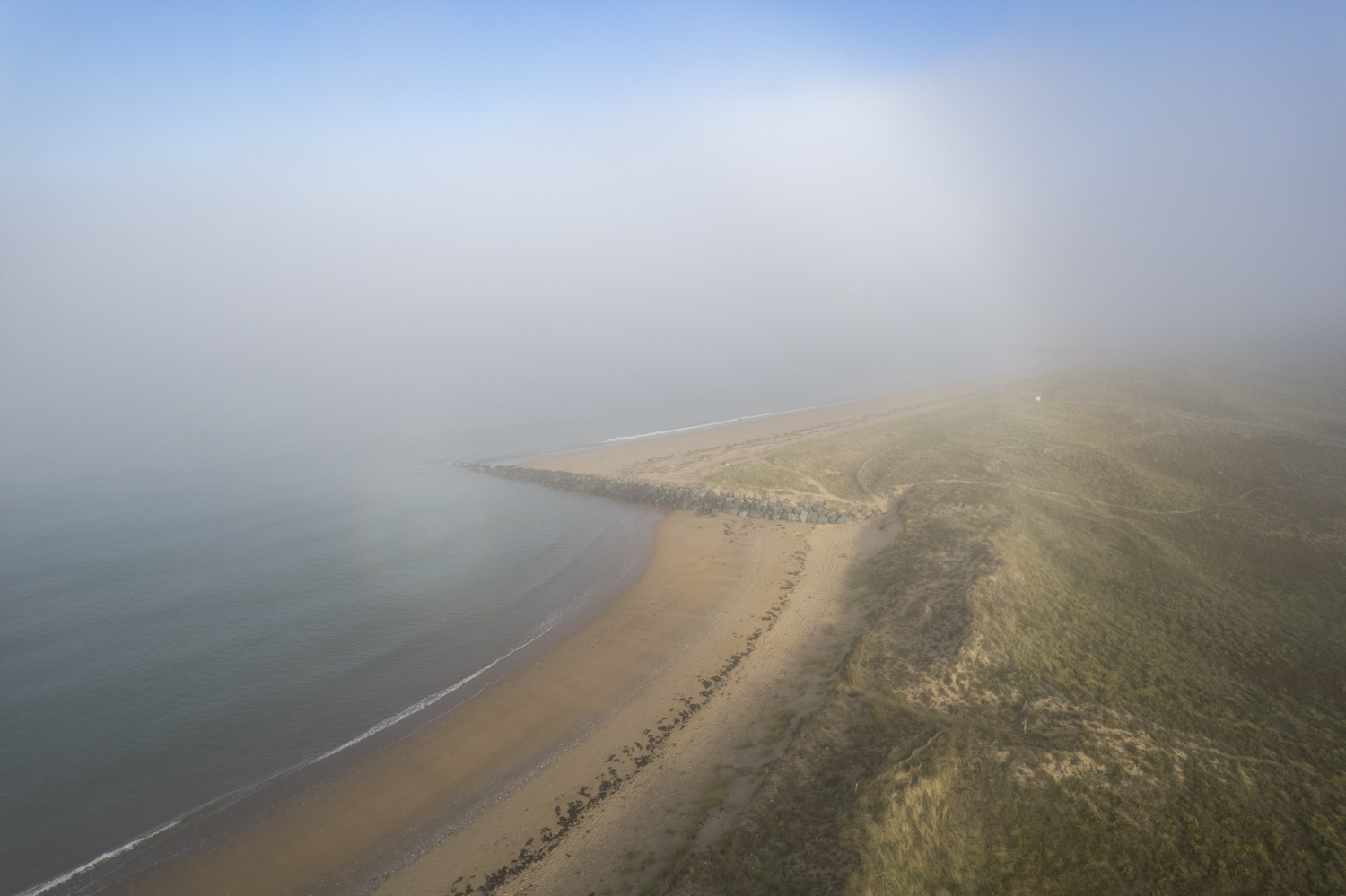 Aiguillon Bay Beach is located at the entrance to Aiguillon Bay. L Aiguillon-Sur-Mer was one of the towns most affected by storm Xynthia on February 27 to 28, 2010, which, coupled with a surge and a strong tidal coefficient, caused a sharp rise in waters. According to the IPCC, with climate change, a higher frequency of extreme weather events are to be expected, such as Storm Xynthia. 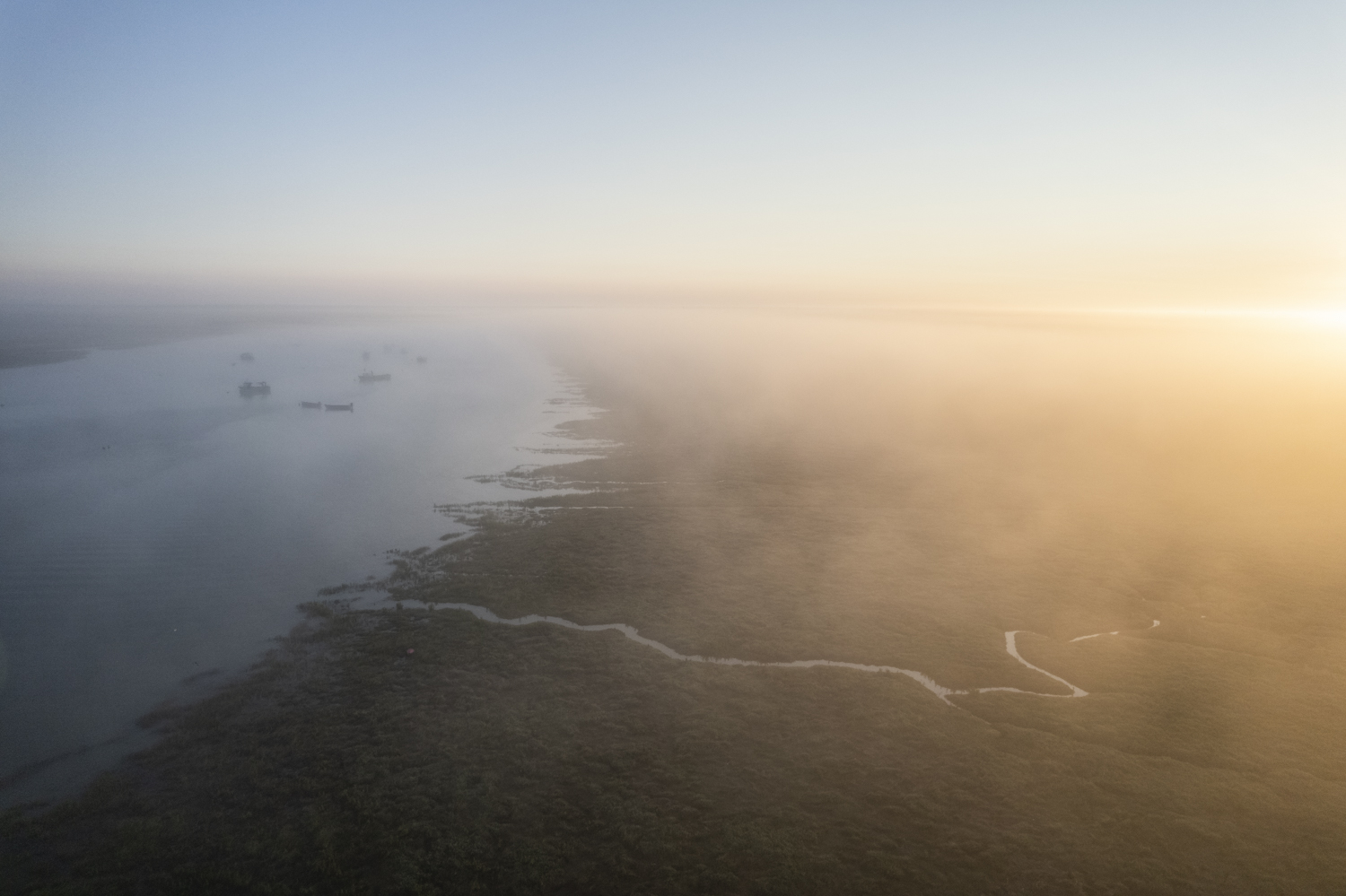 Estuary of the Sevre river, main hydraulic artery of the Marais poitevin. The estuary, which flows into the Aiguillon bay, has many boats for mussel farming and mussel culture. 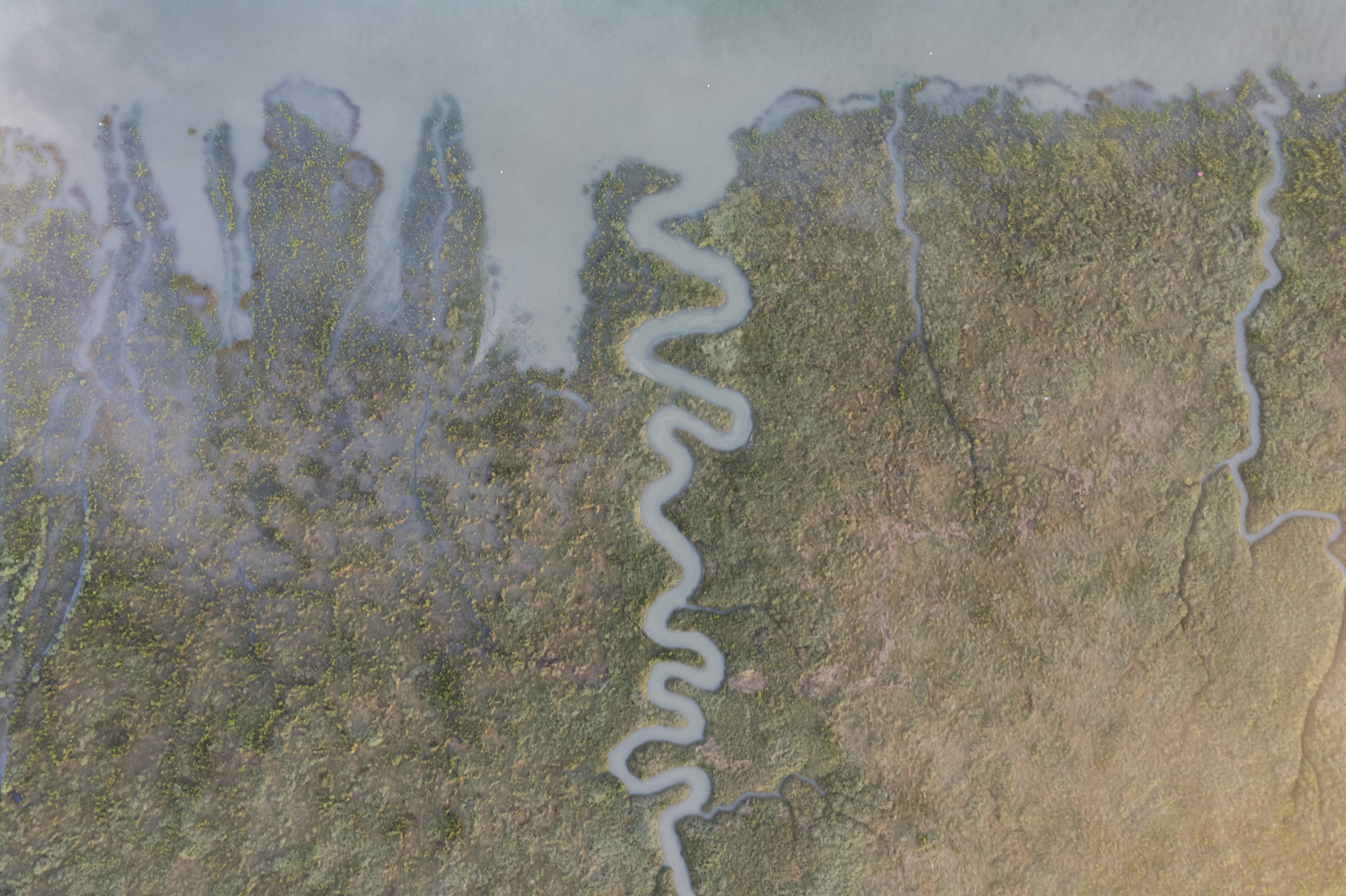 A stream flows into the Sevre estuary. The Marais Poitevin is an almost flat area, which appeared after the sea receded between the 6th and 10th centuries. It is the result of both the natural filling of the Gulf of Pictons (the bay of the Aiguillon) and the arrangements made for more than 1000 years by people to live there and cultivate and breed there. 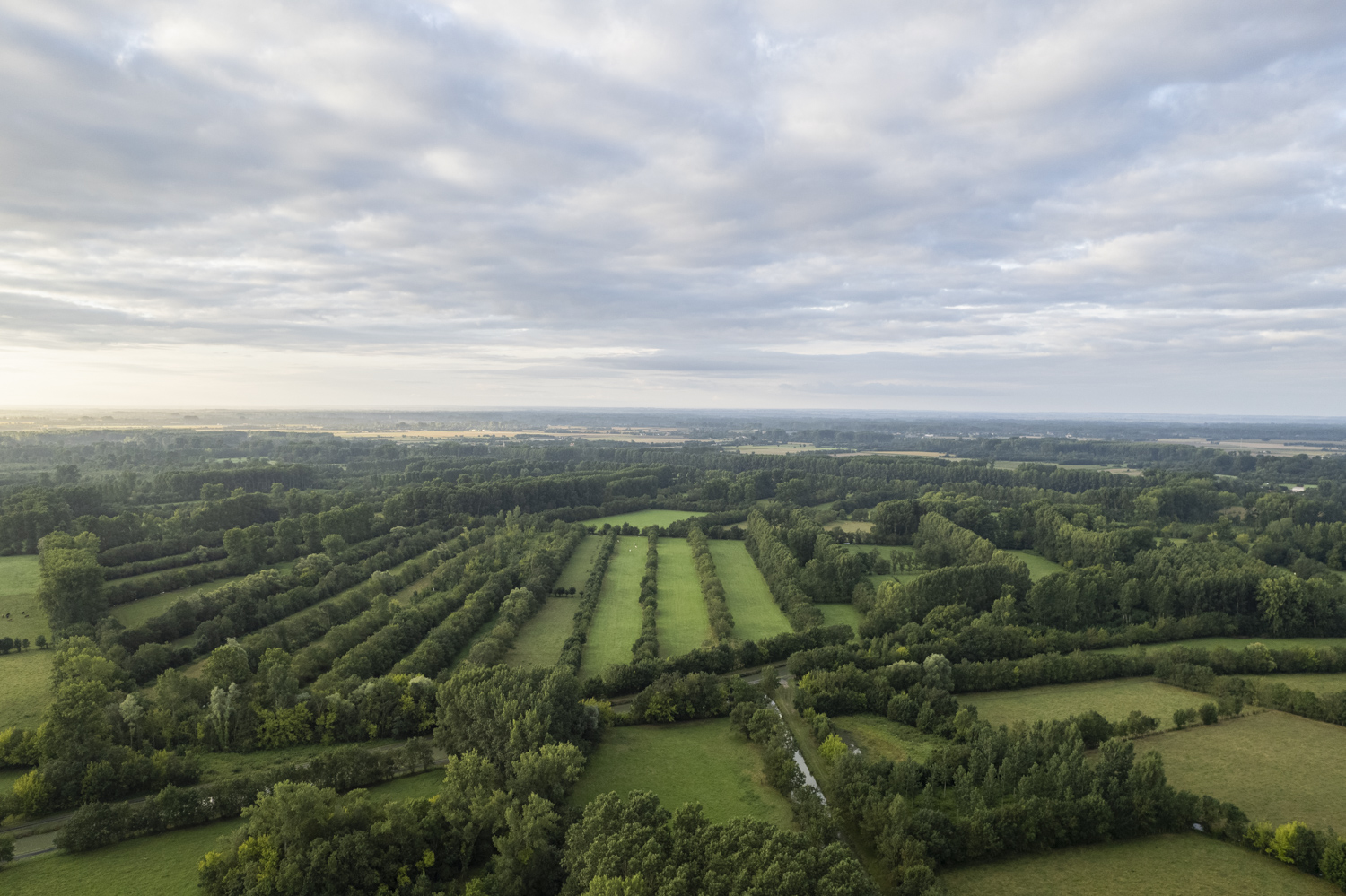 The Marais Mouillé (wet Marsh), commonly called the Venise-Verte (Green Venice), is located between 0 and 5 meters above sea level and represents 5 of the area of the Marais Poitevin. It is made up of many small plots delimited by ditches dug from the Revolution in the middle of the 19th century. The main drainage works began in the 16th century, when Henry IV, according to Sully s order, planned "to drain all the Marshes in the Kingdom of France" and called in Dutch investors specializing in reclamation. By 1640, 6,400 ha of Marais Poitevin had already dried up. 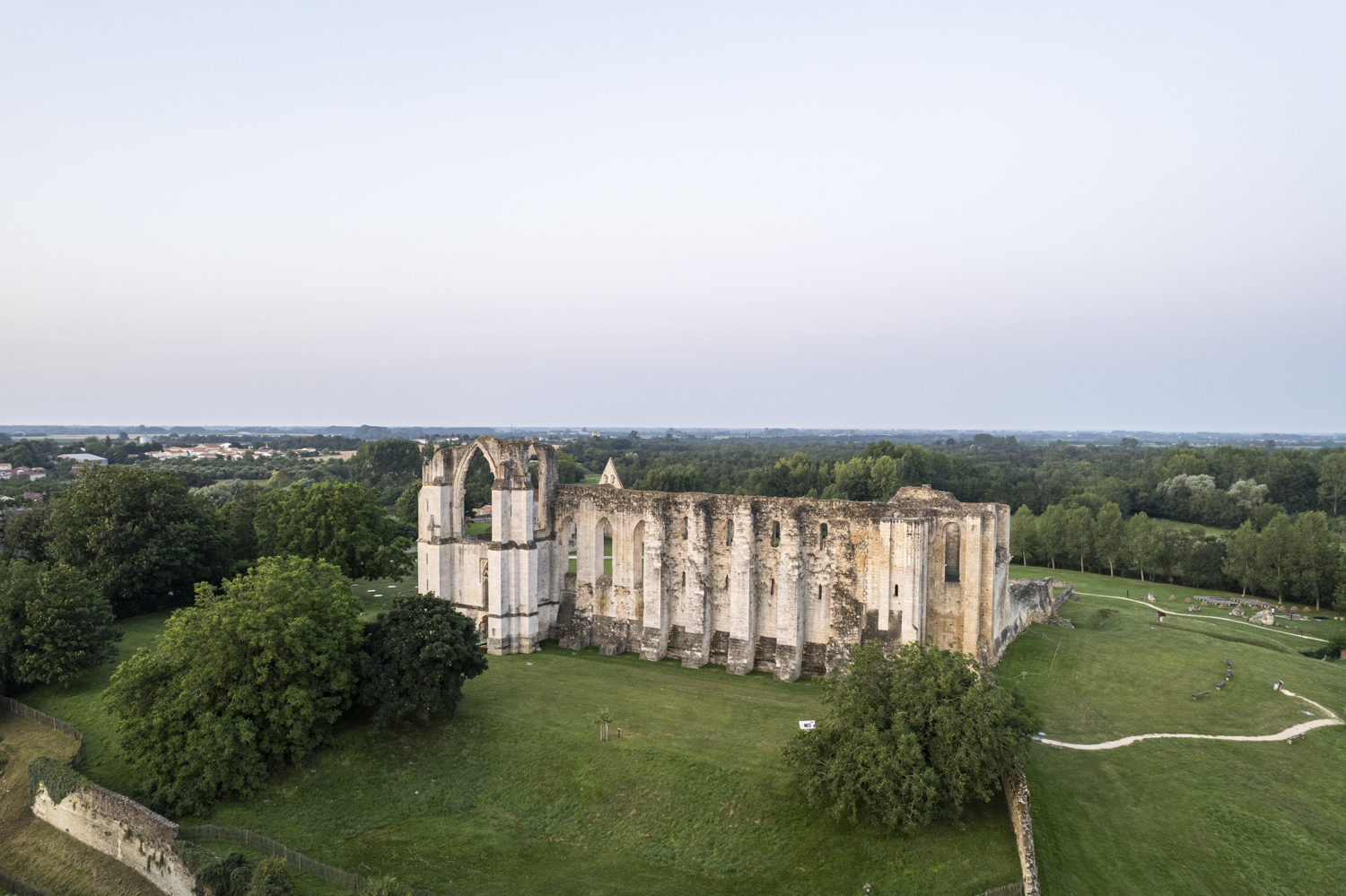 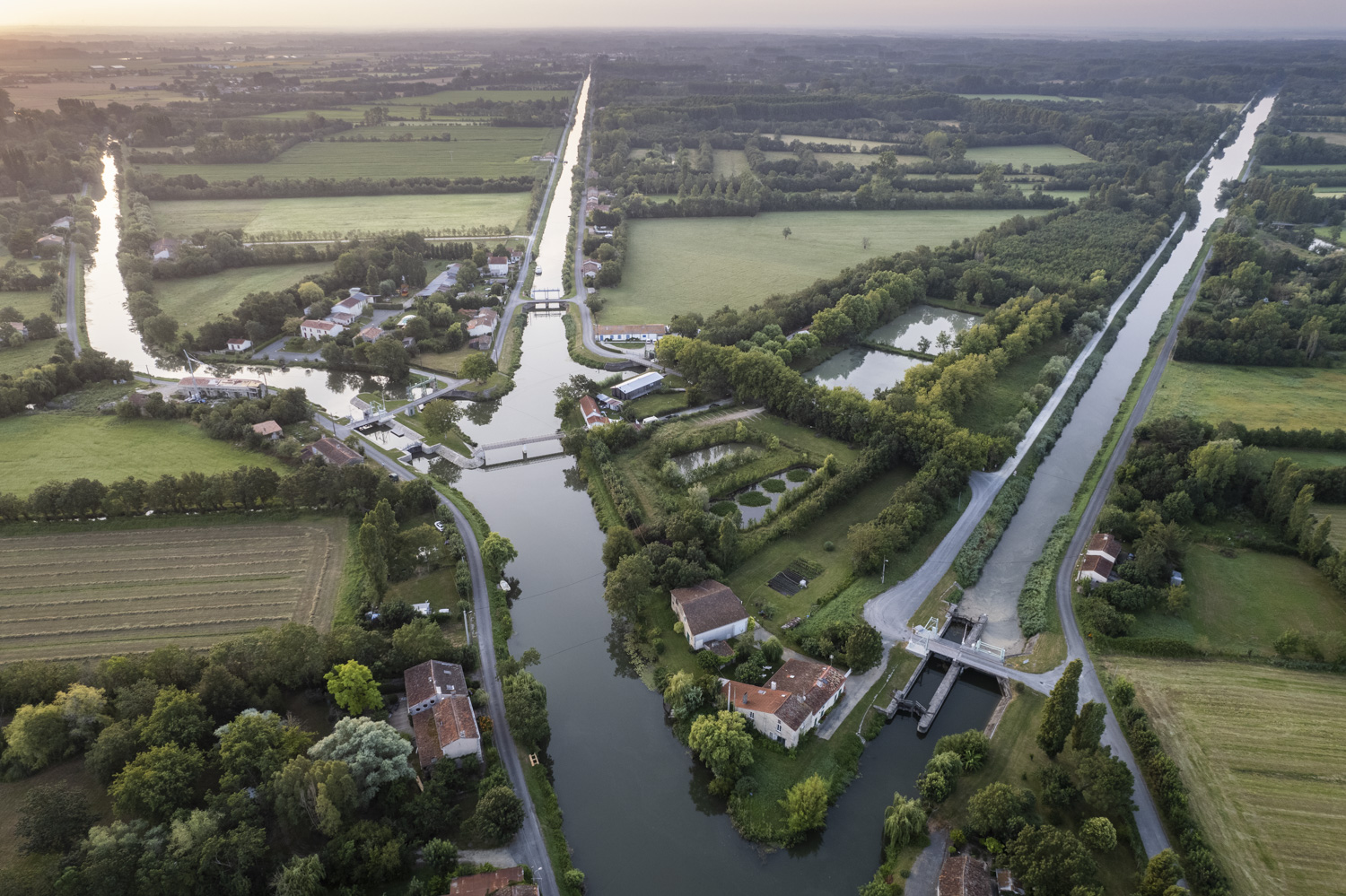 At the Bazoin lock, the river Sevre Niortaise (on the left), the Canal du Nouveau Bejou (New Bejou Canal) and the Canal du Mignon (Mignon Canal) meet. The two canals were built in the 19th century to facilitate navigation between the mouth of the Sevre and the Marais-Mouille. They were used for the transport of goods between the land and the ocean before the advent of the railroad. The Marais has many locks and allows water to be maintained in the Marais during the dry season, in summer. 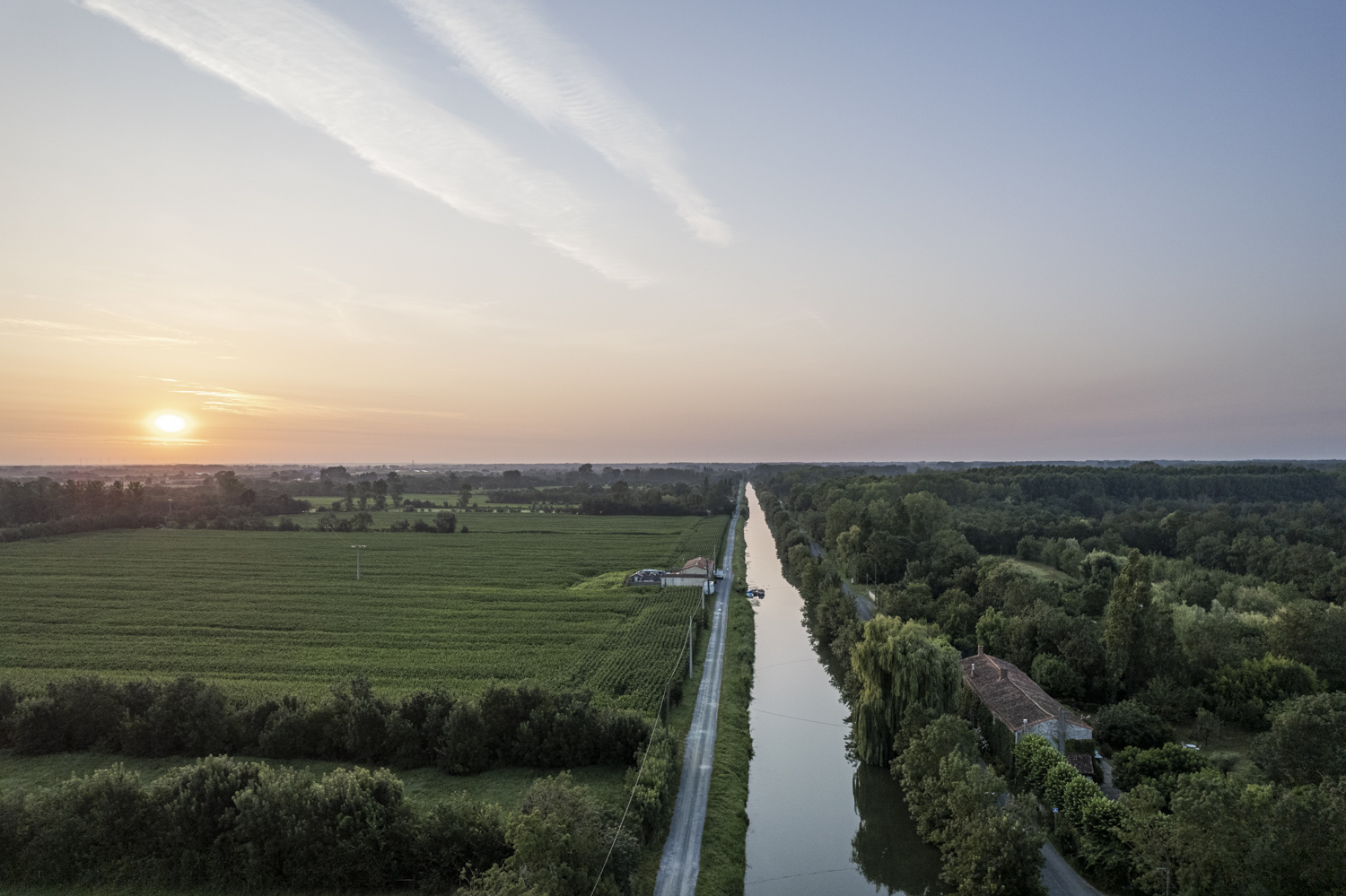 Canal du Nouveau Bejou, a bypass canal, was dug at the beginning of the 19th century to facilitate navigation on the river Sevre Niortaise, which connected Niort, the main town in the area, to the Atlantic Ocean. 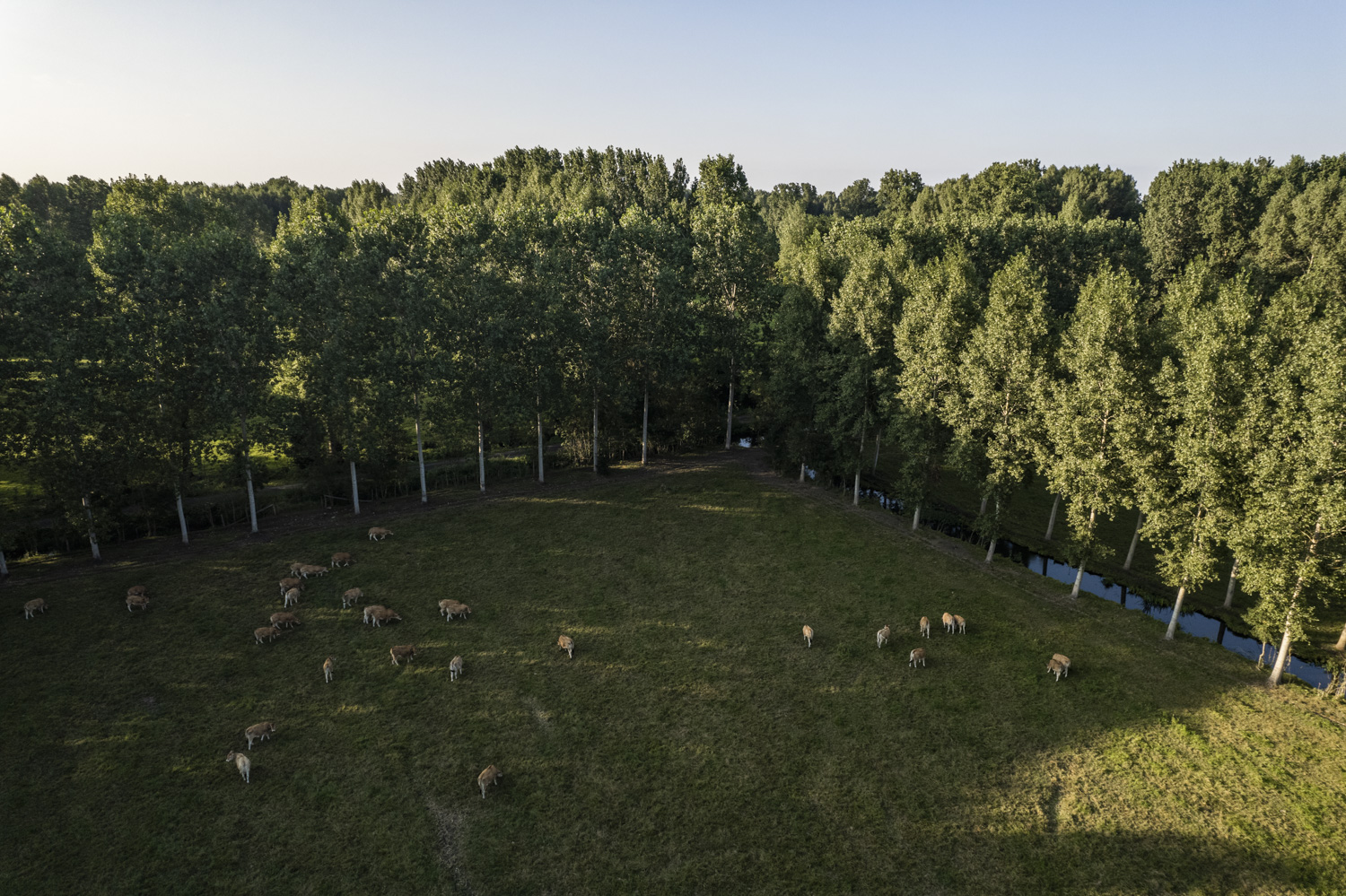 Cows graze in a meadow located in the Wet Marsh. During the heyday of the Marais-Mouille (Wet Marsh), the herders transported cows from meadow to meadow by boat. According to some projections, a large part of the Wet Marsh could be submerged underwater because of the rising water levels due to climate change. 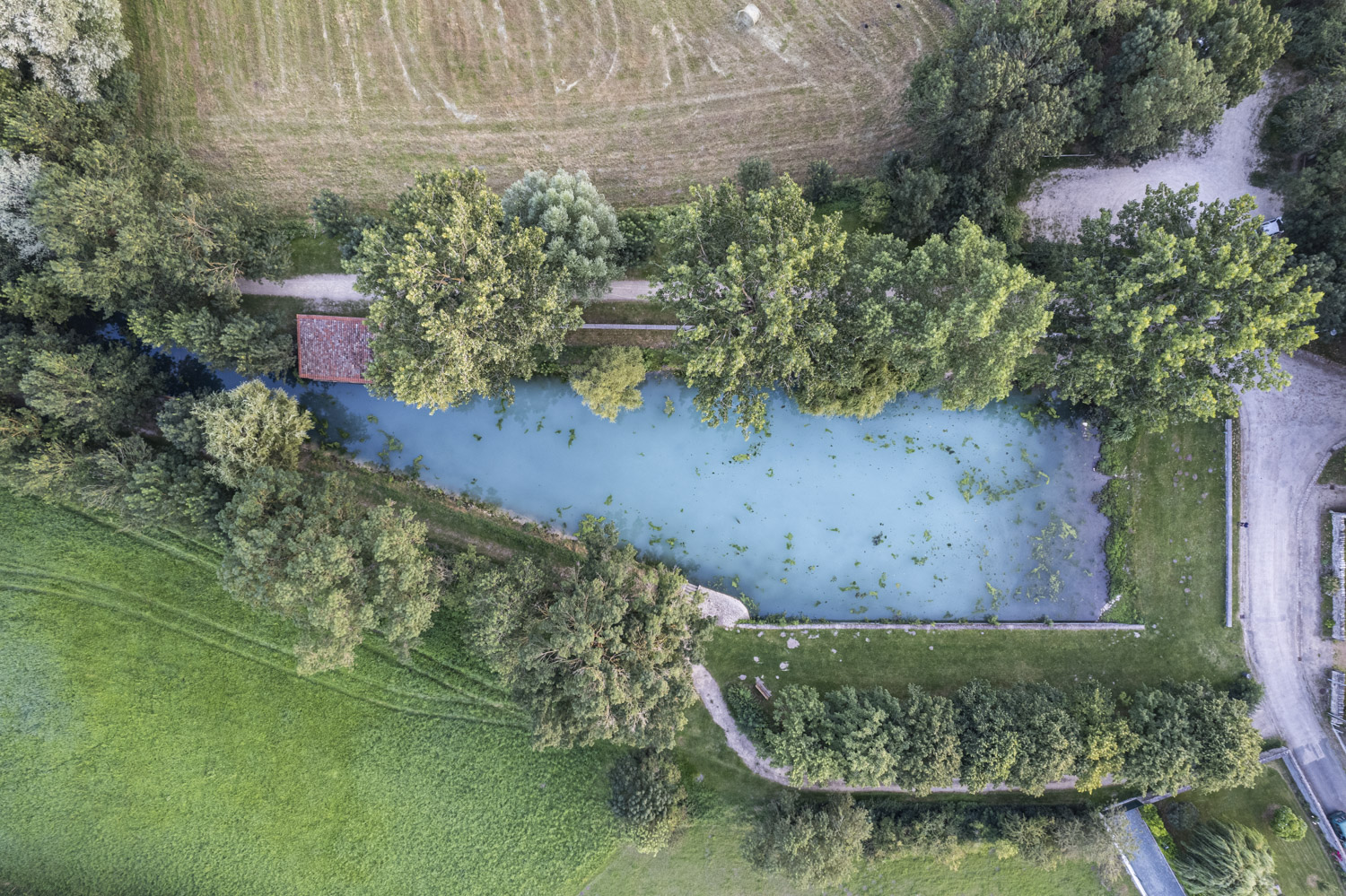 In Azire, the port was the starting point for farmers and breeders to access their meadows by boat. In the port, a small shelter (on the left) served as a wash house here, people came to wash their clothes in the port. Previously, the port was the economic heart of each village in the Marais-mouille. 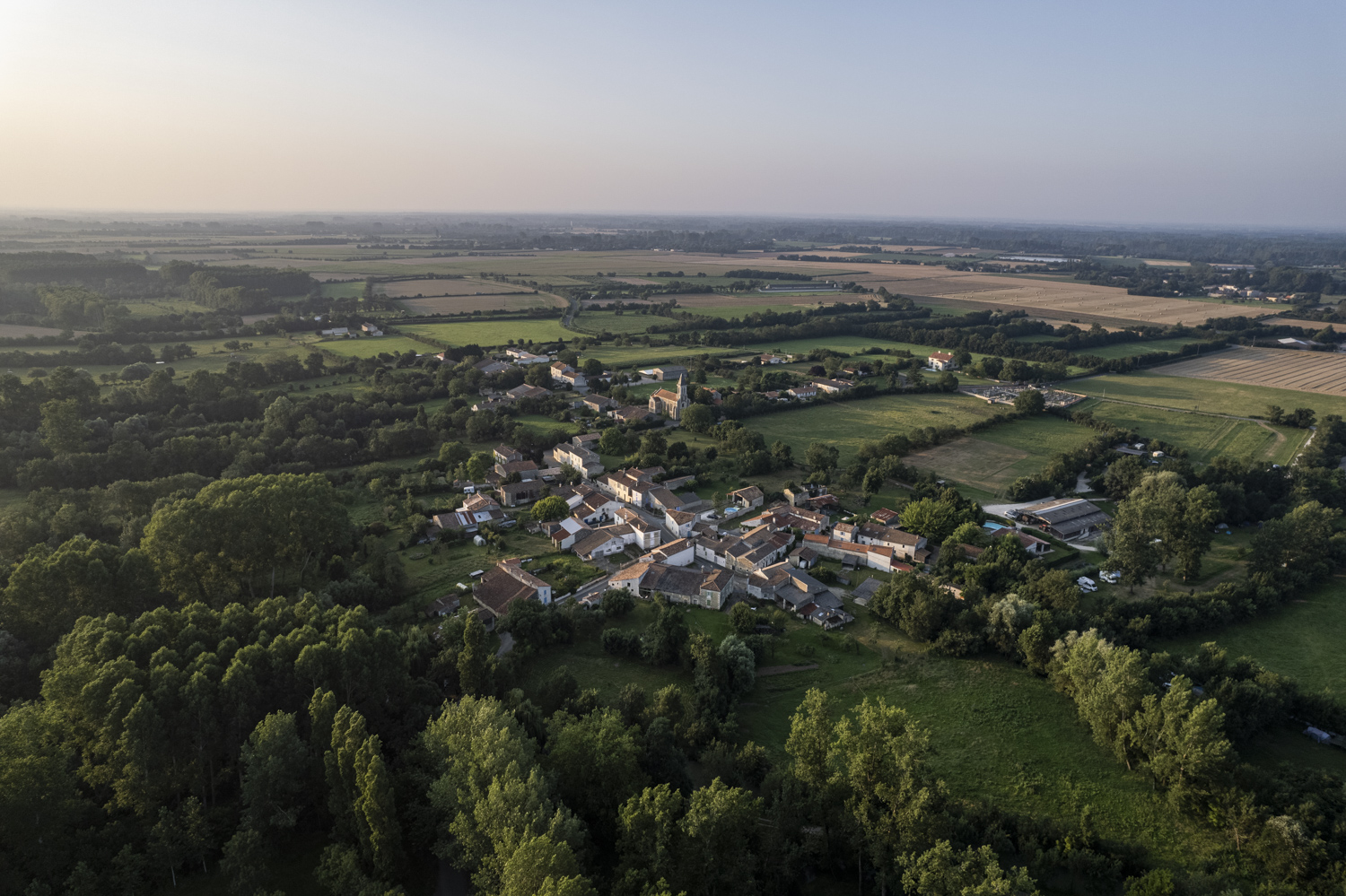 The village of Sainte-Christine is located 40 kilometres from the Sevre estuary and yet culminates only 4 meters above sea level. It is located on the edge of the wet Marsh, which concentrates the economic activity of the village, with agriculture and livestock. Since the mid-1970s, the modernization of agriculture with mechanization and improved drainage has favoured the large areas of the plains (in the background) more suitable for intensive agriculture. The Wet Marsh is made up of a multitude of small plots surrounded by small canals inaccessible to tractors. 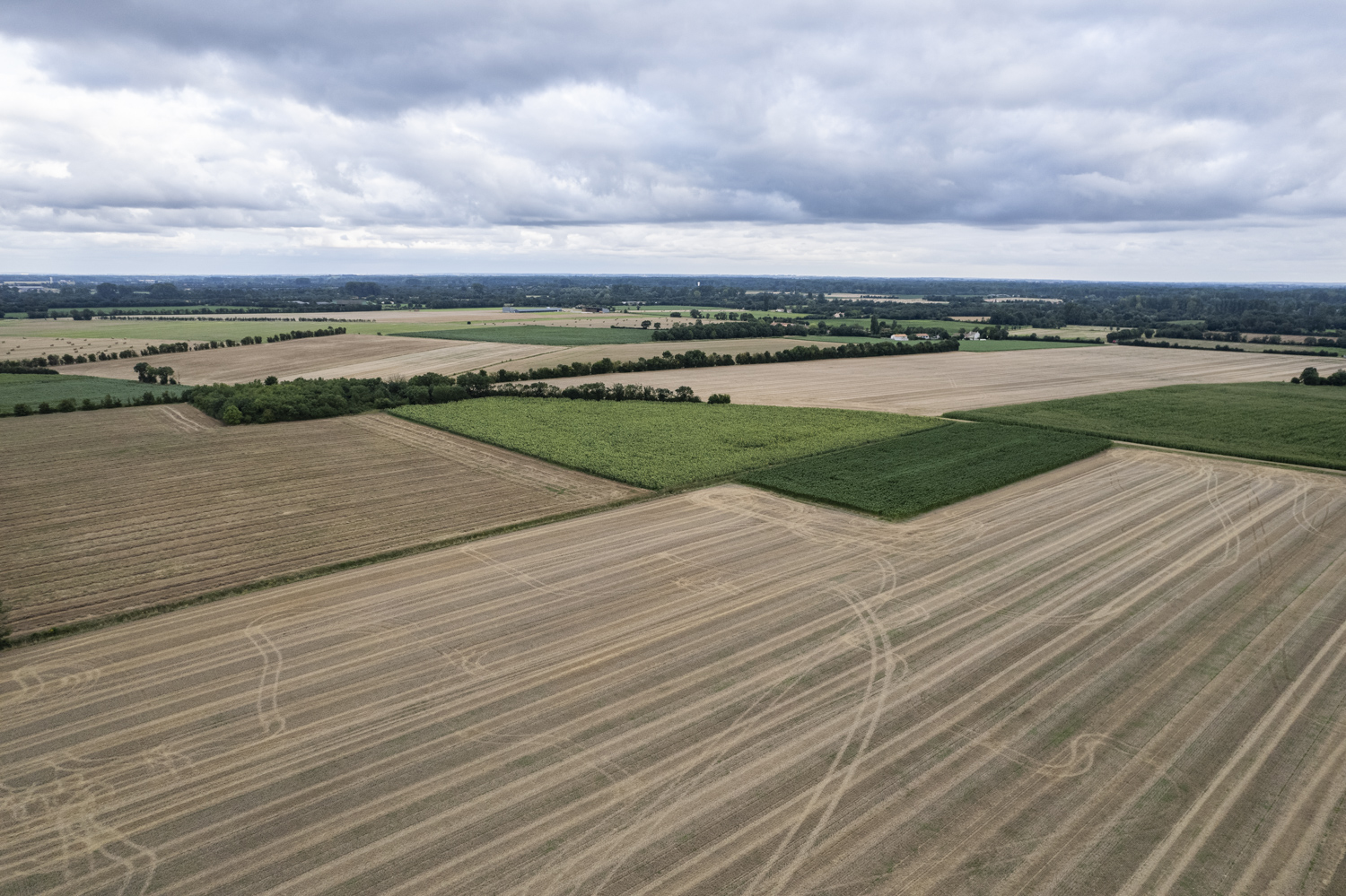 In the plains on the edge of the Marais, intensive agriculture benefits from the large reserve of water that the Marais represents. Since the 1970s, many hedges have been cut to form larger fields, where wheat, sunflower and corn are grown. Irrigation is crucial to allow very drought-prone land to have excellent potential for summer cereal crops. 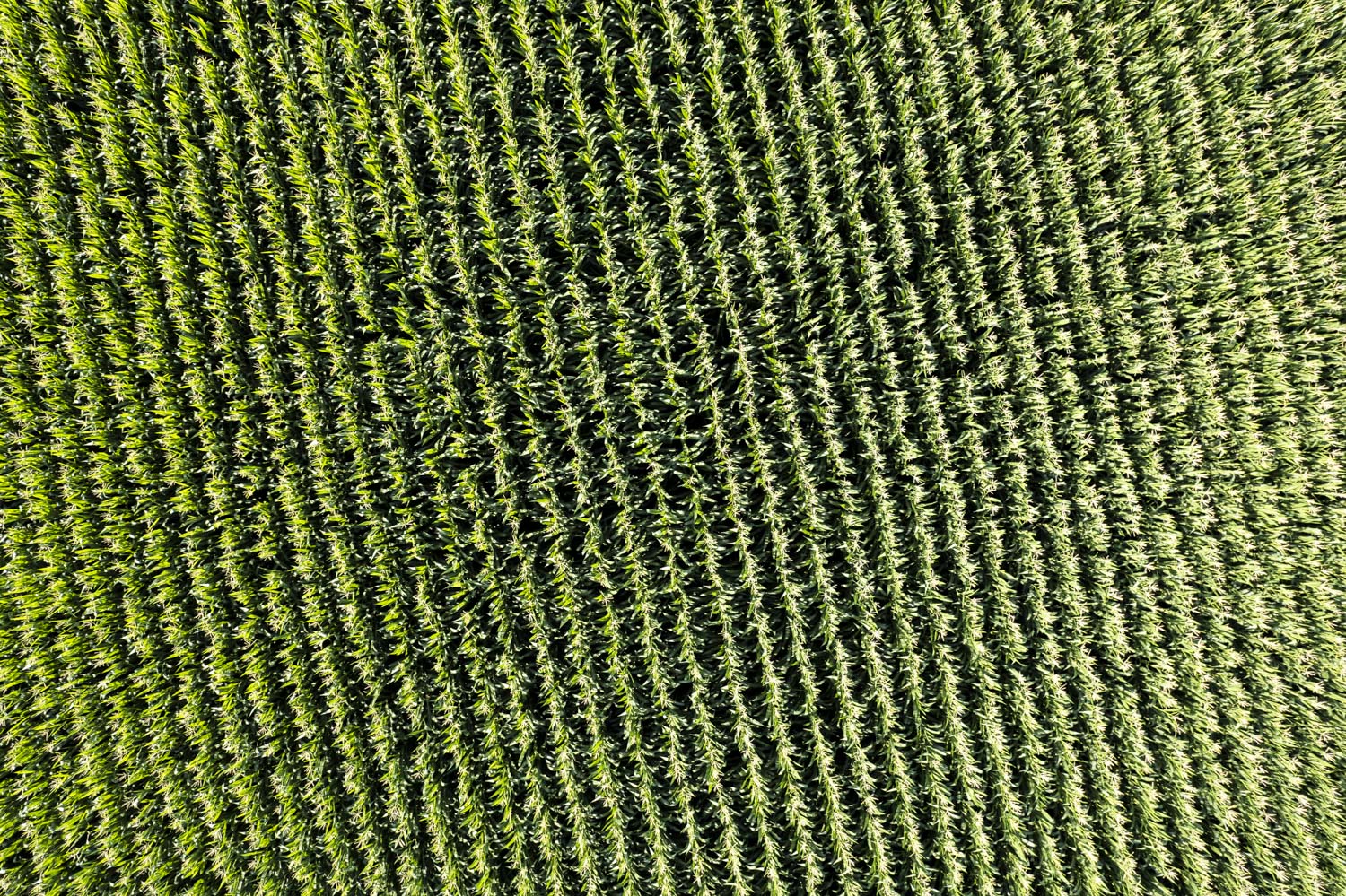 Maize is one of the most cultivated plants in France. It must be watered during its flowering period, in the middle of summer. Almost half of the water used in France is for corn irrigation. The main purpose of corn is to feed livestock. 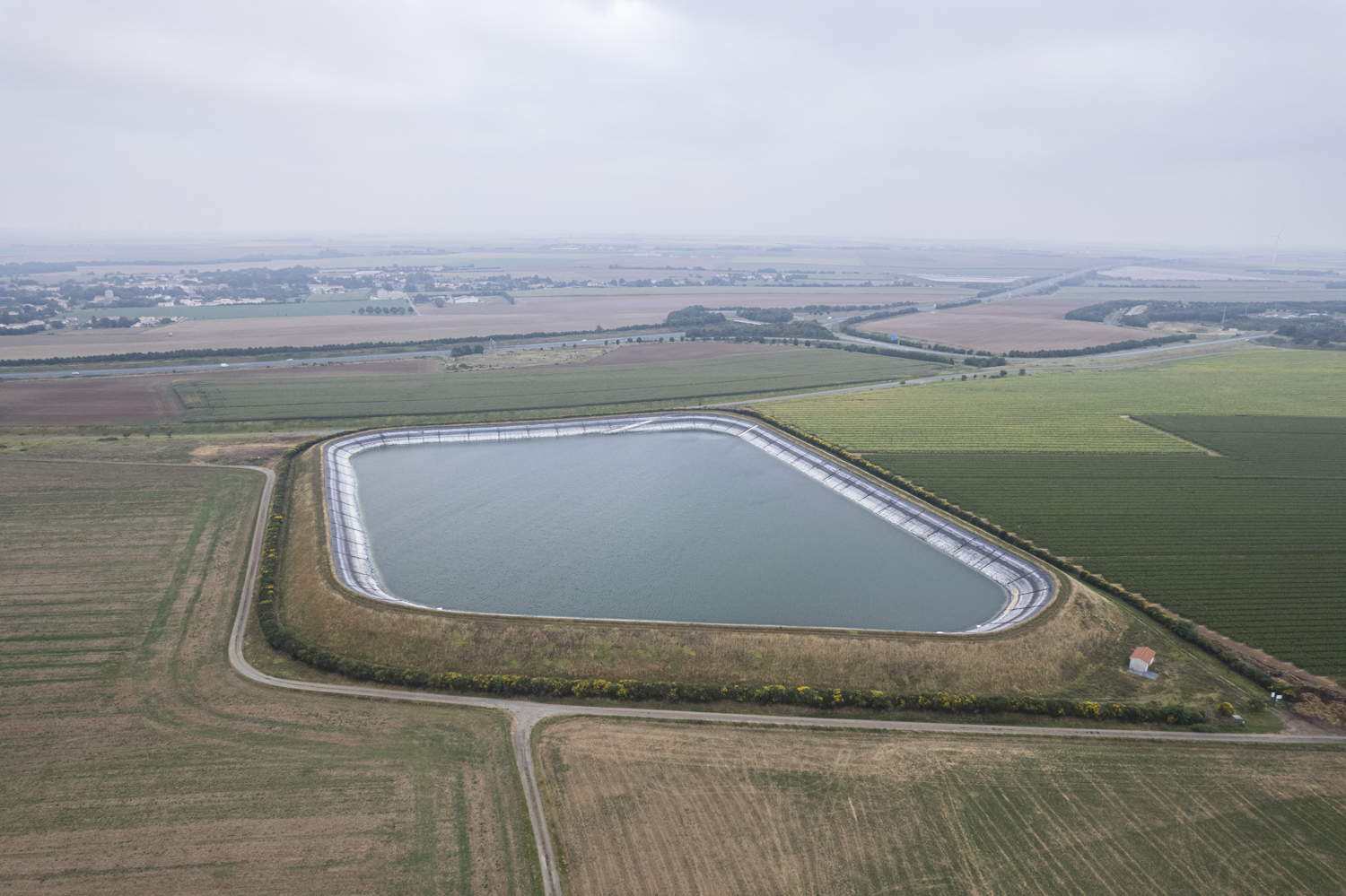 A basin with an area of 5 hectares is located on the outskirts of the Marais. It is supplied with water in part by pumping groundwater in winter and serves as a water reserve for agriculture and especially for growing corn. Many basins are being built on the outskirts of the Marais. Some actors from the Marais are opposed to these basins, including the “Bassines Non Merci” movement, in particular, because of the risk of reduced water tables for irrigation of intensive crops not suitable for the Marais Poitevin. 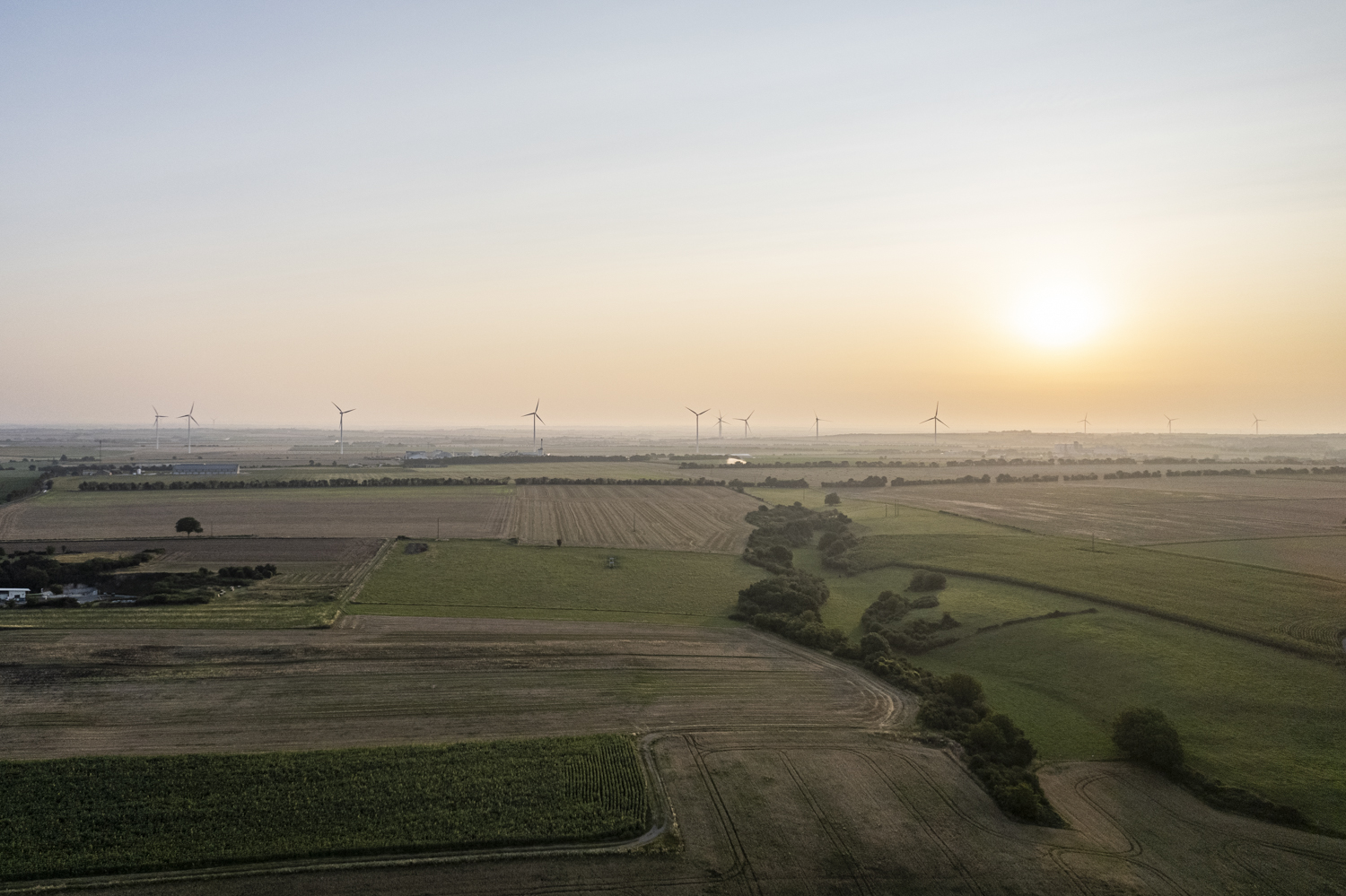