Raketa: the rebirth of a Russian icon.

Created in 1961 as a tribute to Yuri Gagarin’s achievement, Raketa (rocket) watches were one of the most iconic brands of the Soviet Union. Its historic factory, which will turn 300 years on the 3rd of November 2021, had up to 7,500 workers, and its annual production was around 5 million units. The city of Peterhof, located on the outskirts of Saint Petersburg, depended almost exclusively on this factory, a provider of stable jobs and the pride of the region.

Like many other state-owned companies, the 1990s and the liberalization of the Russian economy were fatal for the Raketa factory. At the end of the 2000s, it had no more than fifteen workers, the sole keepers of unique know-how, the basis of Raketa’s rebirth. In 2011, a duo of foreign investors set out to redevelop this iconic brand. Without denying its identity and its history, the priority has been to develop Raketa towards the high-end segment of the watchmaking sector.

Since then, Raketa has wanted to innovate and become a key player in the world of watchmaking. The recipe for this is based on a clever mix of modern technology and Soviet Union know-how. In 2014, Raketa joined the closed club of watch brands capable of creating the mechanical movement in-house and fully mastering the manufacture of an automatic watch and its 242 components.

The transmission of knowledge related to the hundreds of machines in the factory has been the cornerstone of the revival of the Russian brand. Apart from the purely technical aspect, the Raketa factory also witnessed the recent changes in the industrial sector in Russia, the transition from a Soviet organization of labour to a capitalist organization.

With a production of 5,000 watches per year, Raketa is the precursor of Russia’s return to the world luxury scene.

To know more about Raketa (here). 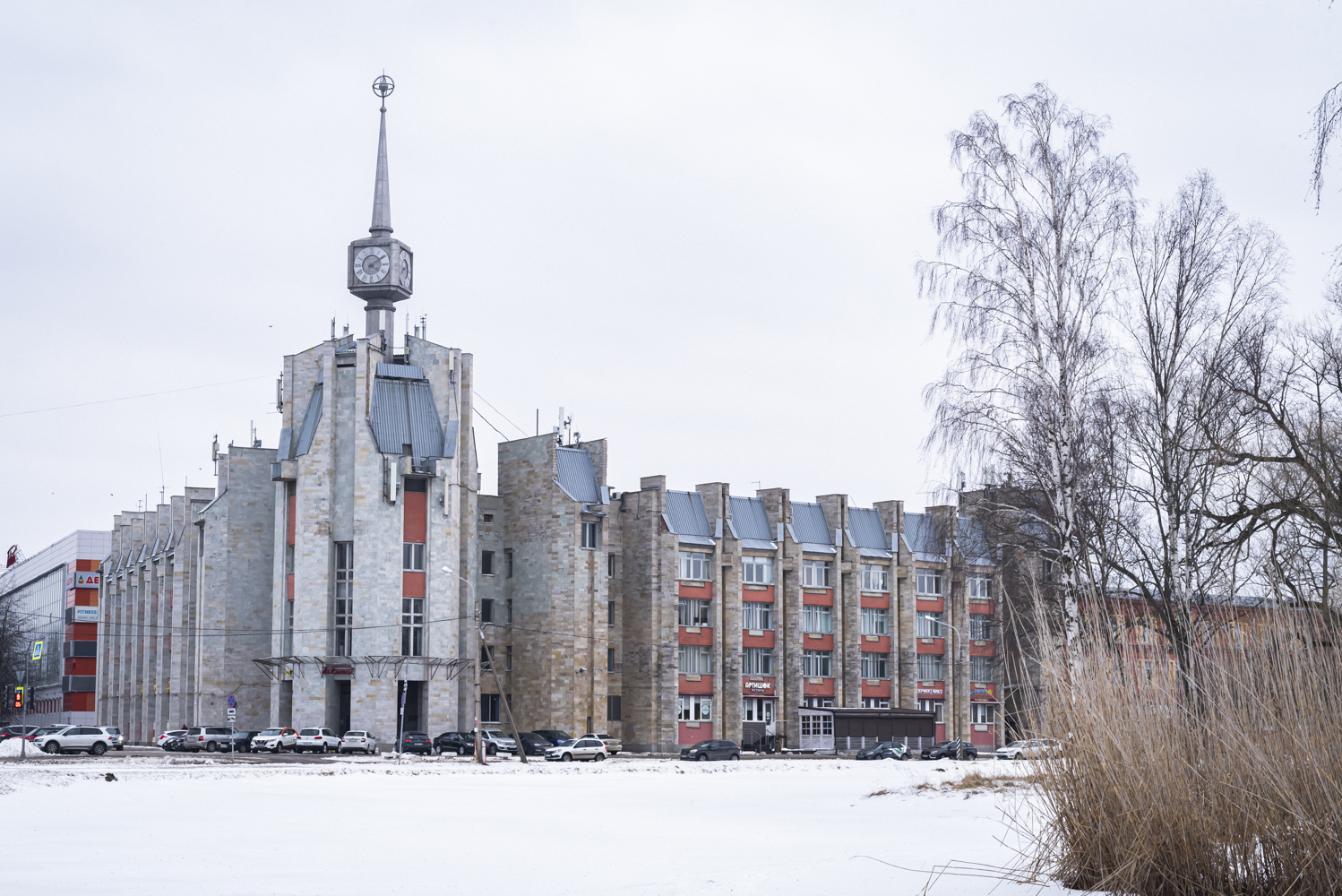 Petrodvorets is Russia s oldest factory and was founded by Peter the Great in 1721 first to help in the construction of the Peterhof Palaces. It started to produce equipment and parts for the watch industry in the 1920s. After World War II, the factory started to produce complete watches under the brand name Pobeda and from 1961 under the brand Raketa. Since, the Raketa factory is still situated in Petrodvorets and counts 100 workers (7,500 during the soviet union). Photography by Lambert Coleman / Hans Lucas. 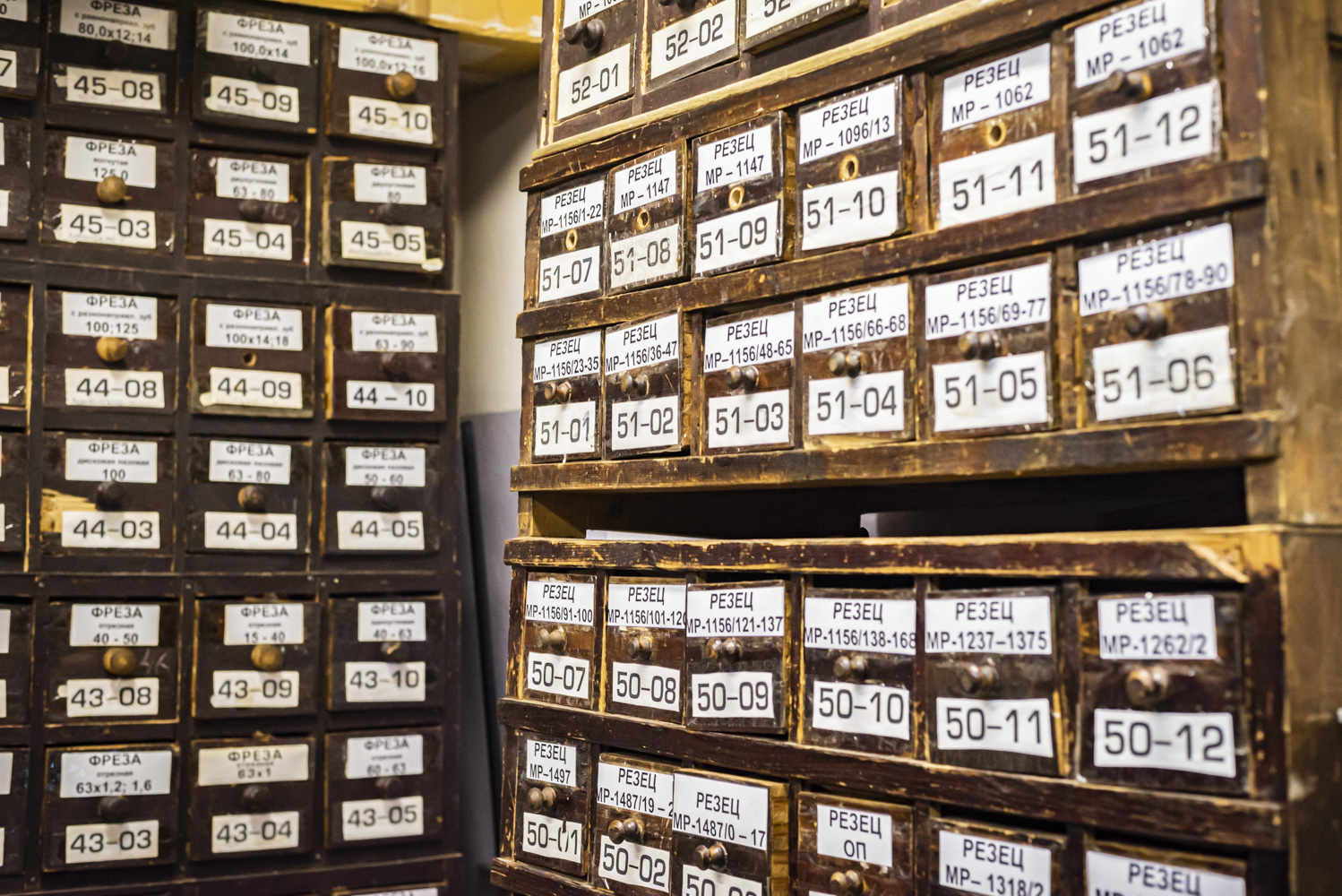 In the wooden boxes are kept the tools used for the watch production. Most of them date from the Soviet Union and are the cornerstone of the Raketa production site. 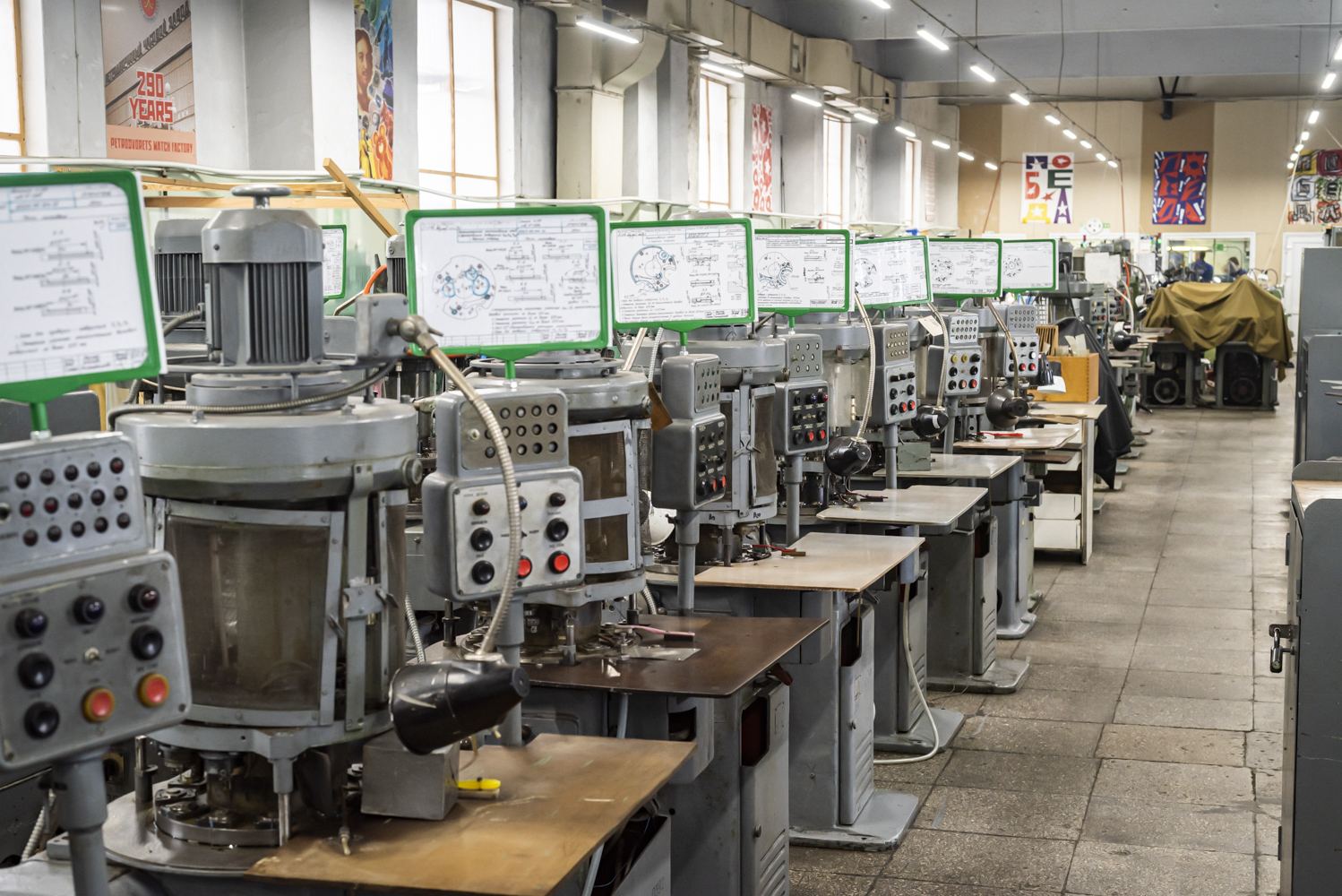 View of the main production workshop, which counts dozens of machines dating mainly from the Soviet Union. Above each machine, a board indicate the measures and values to set the machine, to make one of the 242 parts which composes Raketa watches. 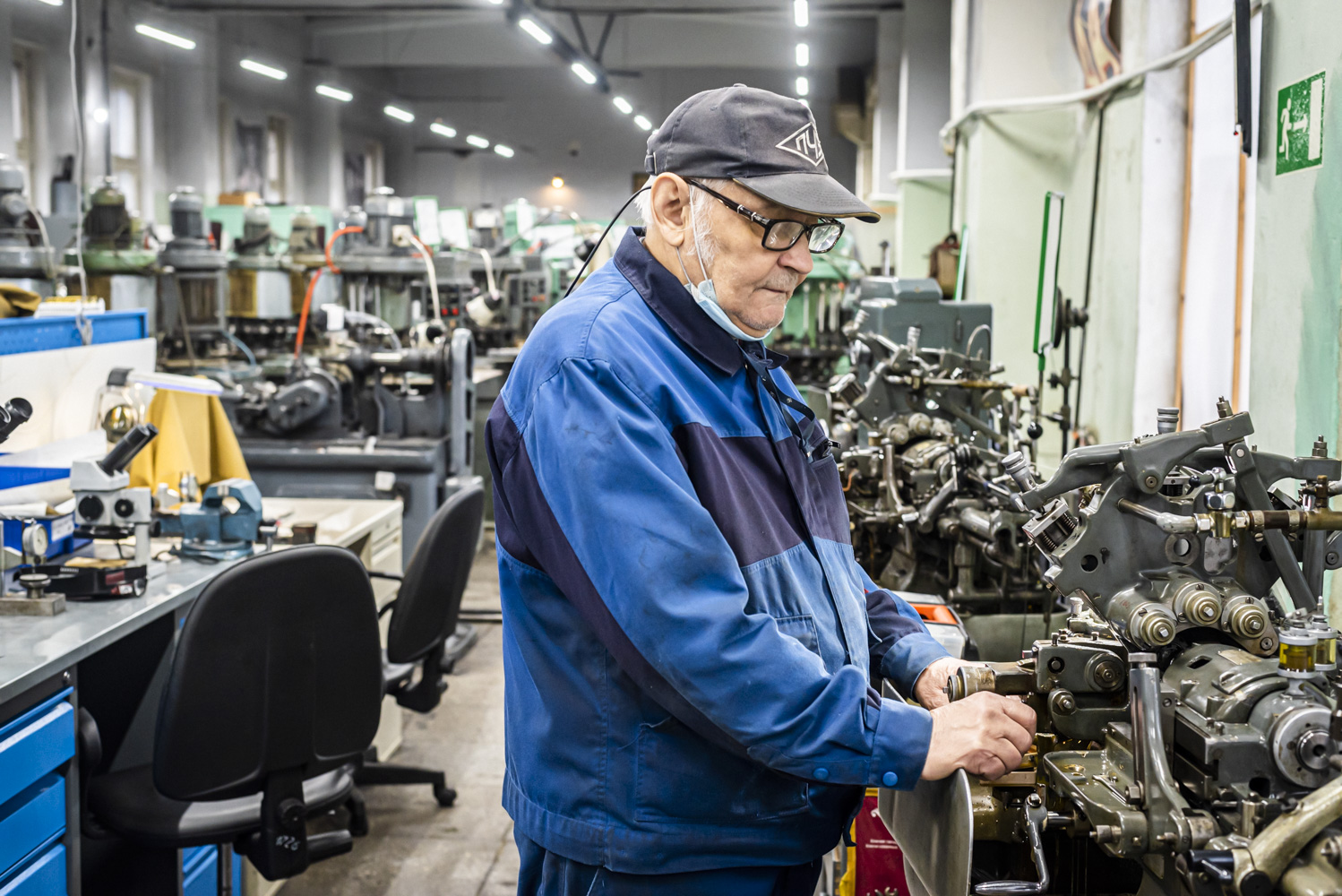 Gennady Germanovich is standing next to his 45 years old machine. The machine was bought in Switzerland, but was made in USSR. In the 1990s, while many factories collapsed, many machines were sold abroad for nothing and were reimported since. Gennady started working in the factory in 1963, two years after it was opened. He spent his entire career working in the “Raketa” factory, in the machinery department. When he was 15 years old, he did not want to study further, so his father brought him here. When he started, the factory was much bigger, and counted up to 7,500 employees.He could feel the strong patriotic feeling in the factory. Two years earlier, Yuri Gagarin, to whom the Raketa (rocket) brand is dedicated, was the first man to go to space. The entire USSR was proud and inspired by this performance: “everyone loved USSR, there was a very good attitude to every day’s life”. According to Gennady, today is a bit different. There are more products in the shops but people are less happy. He also has the feeling that during soviet unions, everyone was equal, whereas now, the gap between rich and poor is huge. Gennady started as a volunteer, and learned to use the machines during four years. At that time, he was paid 170 rubles. Then, he was sent to the army, in Leningrad region, and was getting a salary of 220 rubles. He came back to the factory, and made his entire career here. Like many soviet workers, Gennady received some award all along his career. He was sent to North Vietnam in 1970, by the local branch of the communist party as a reward for his commitment in organizing different types of elections in his region. Nowadays, Gennady feels acknowledge to work for the factory, he feels acknowledge by the management, and he is mentoring a new worker, Vladimir. During his entire life, Gennady trained many new workers, transmitting his unique knowledge. He feels lucky to work in such conditions, as at his age, if had to find a job, he would probably be wor

Gennady is gathering the parts he made with his bar-turning machine. The small parts he will be make will be asembled with the other 241 parts necessary to make a Raketa watch. - When Gennady started, the Raketa factory was producing 5 million watches every year. Gennady bought his Raketa watch 50 years ago, and since it is working perfectly. He just had to change the screen twice. He bought his Raketa for 30 rubles, which was two days of work at that time. He was then making 370 rubles per month. 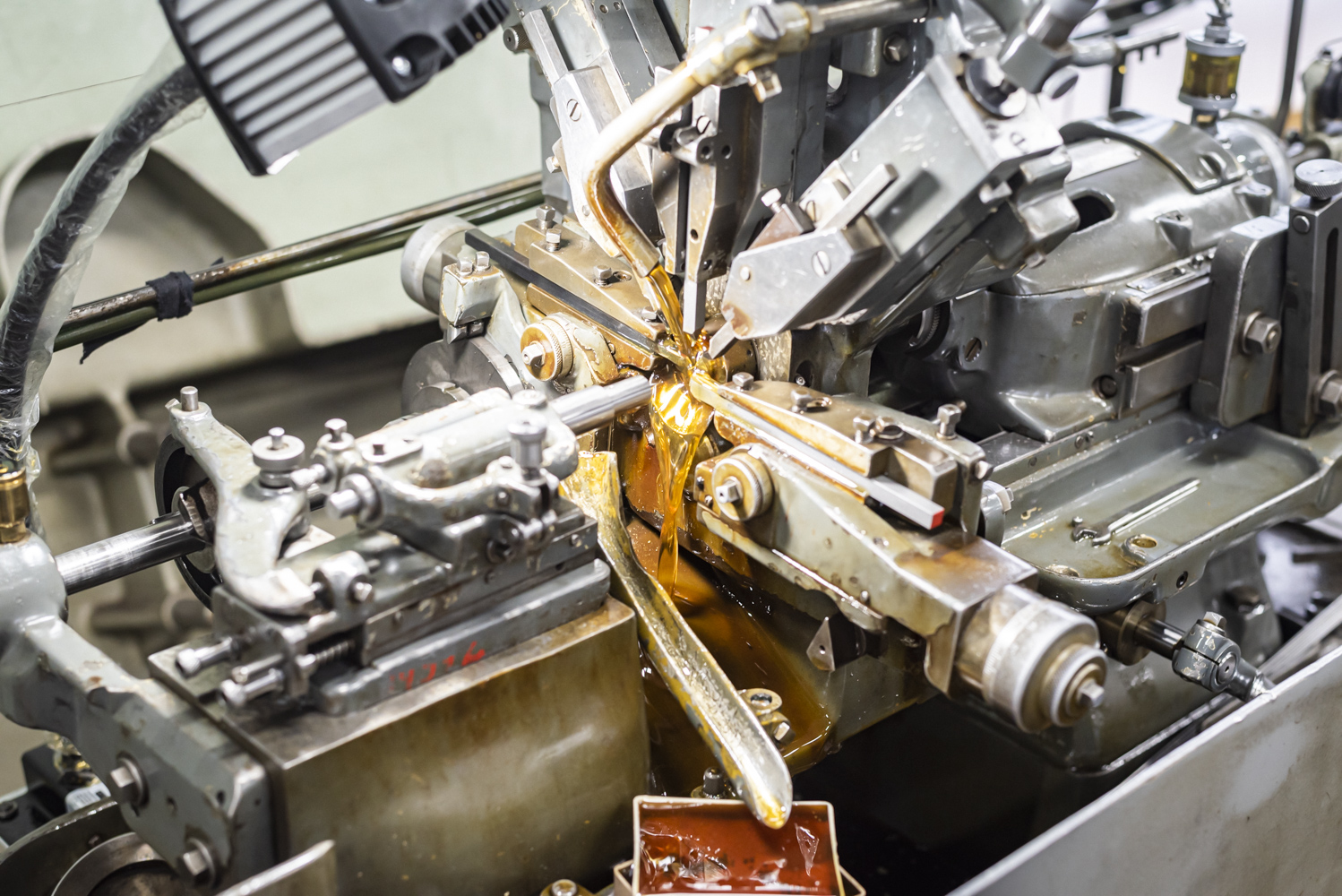 Gennady‘ bar-turning machine. To make 700 details/parts from the machine, it requires one day of preparation. According to Gennady, running the machine requires time and a good sense of mathematics and trigonometry. 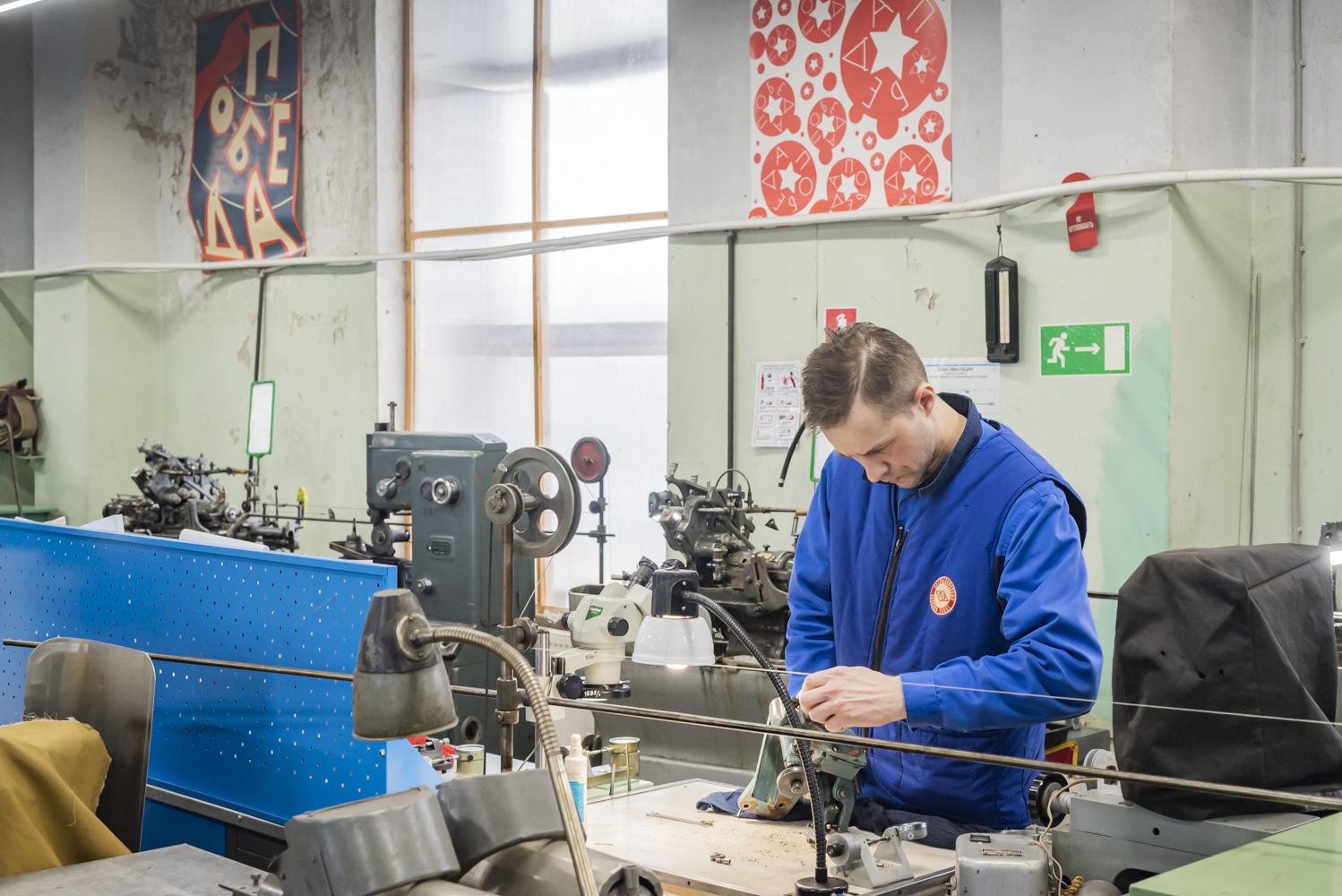 Vladimir has been monitored and trained by Gennadi for the last four years. He will become fully trained after seven years. Before, he used to work in another factory repairing military chips. His previous work was better paid but was not as interesting. As he realized he could not change the mindset of the factory, he decided to quit his job and to join the Raketa factory. He was hired even though he did not have any expertise in the watchmaking factory. During twenty years, the Raketa factory was left abandoned, and in 2011, only a few veterans new how the machins worked. Since, the training of a new generation of technicians is the priority. 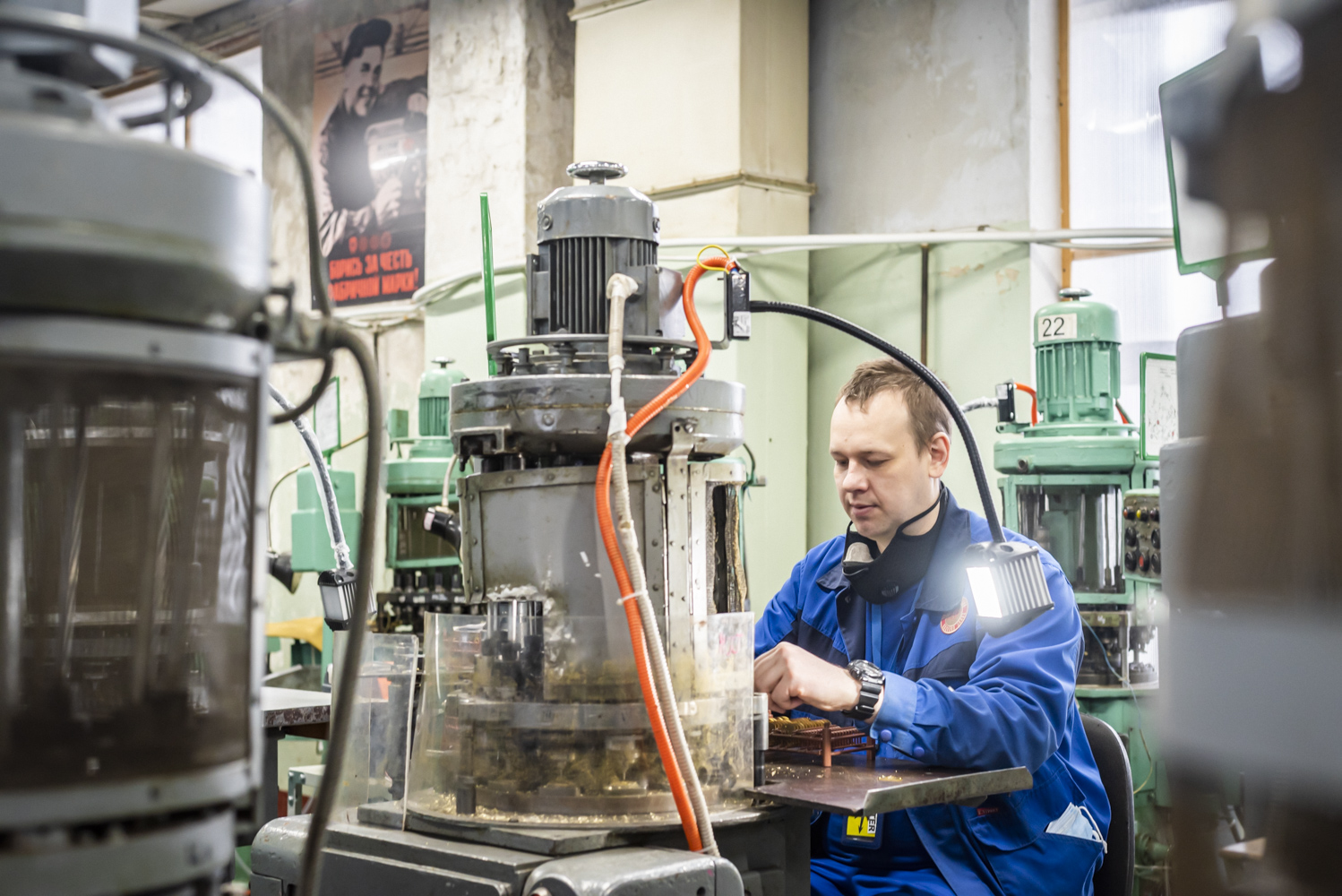 Timur is working on a machine that is used to fabricate watch plates. The watch plate will support the mechanical movement of the watch, necessary for an automatic watch. Timur is 35 years old and has been working here for six years for Raketa. Before, he was working as a taxi driver. 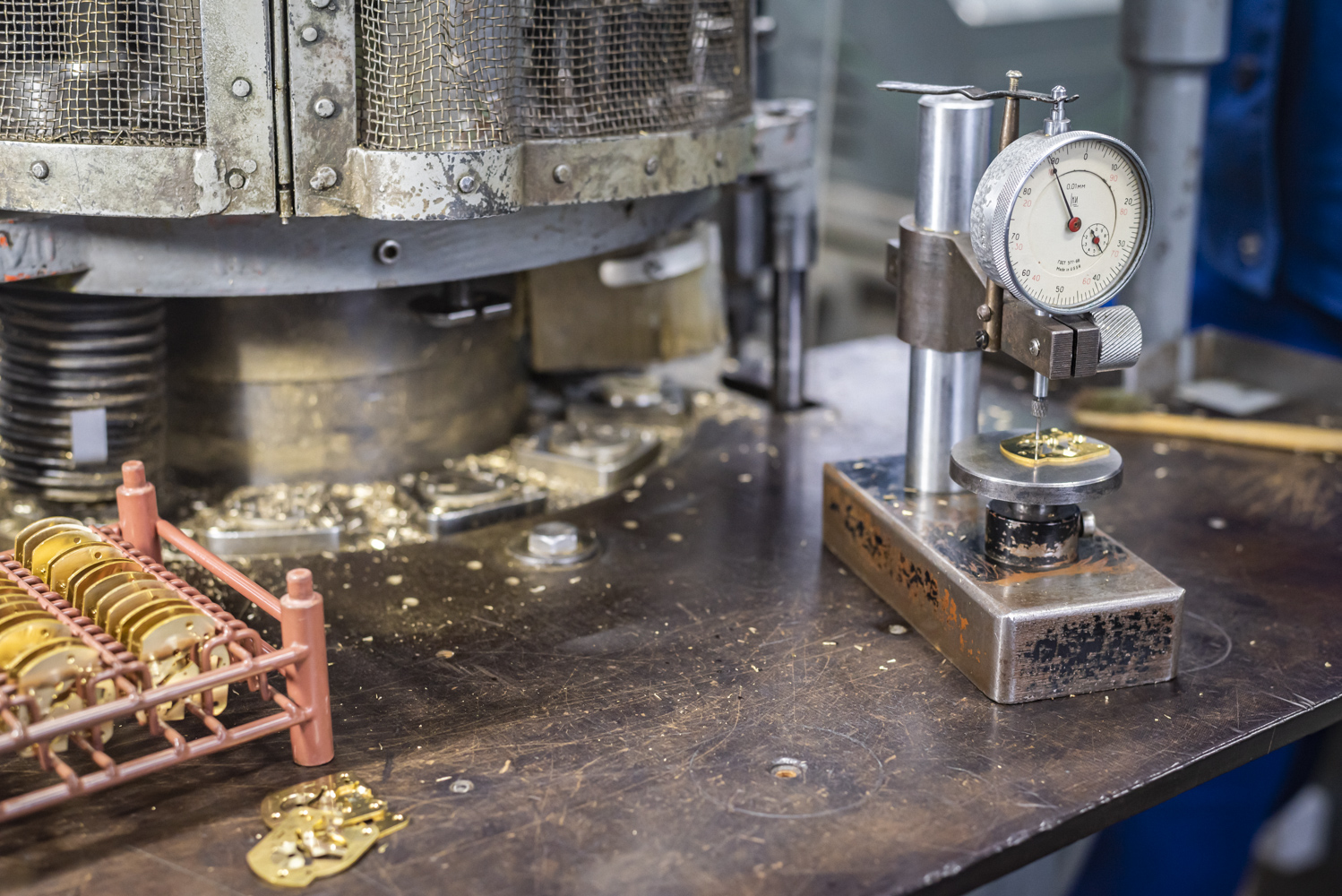 Timur is checking that the dimensions of the watch plate are respected. The toothbrush next to him is used to ensure that no dust is altering the quality of the part. 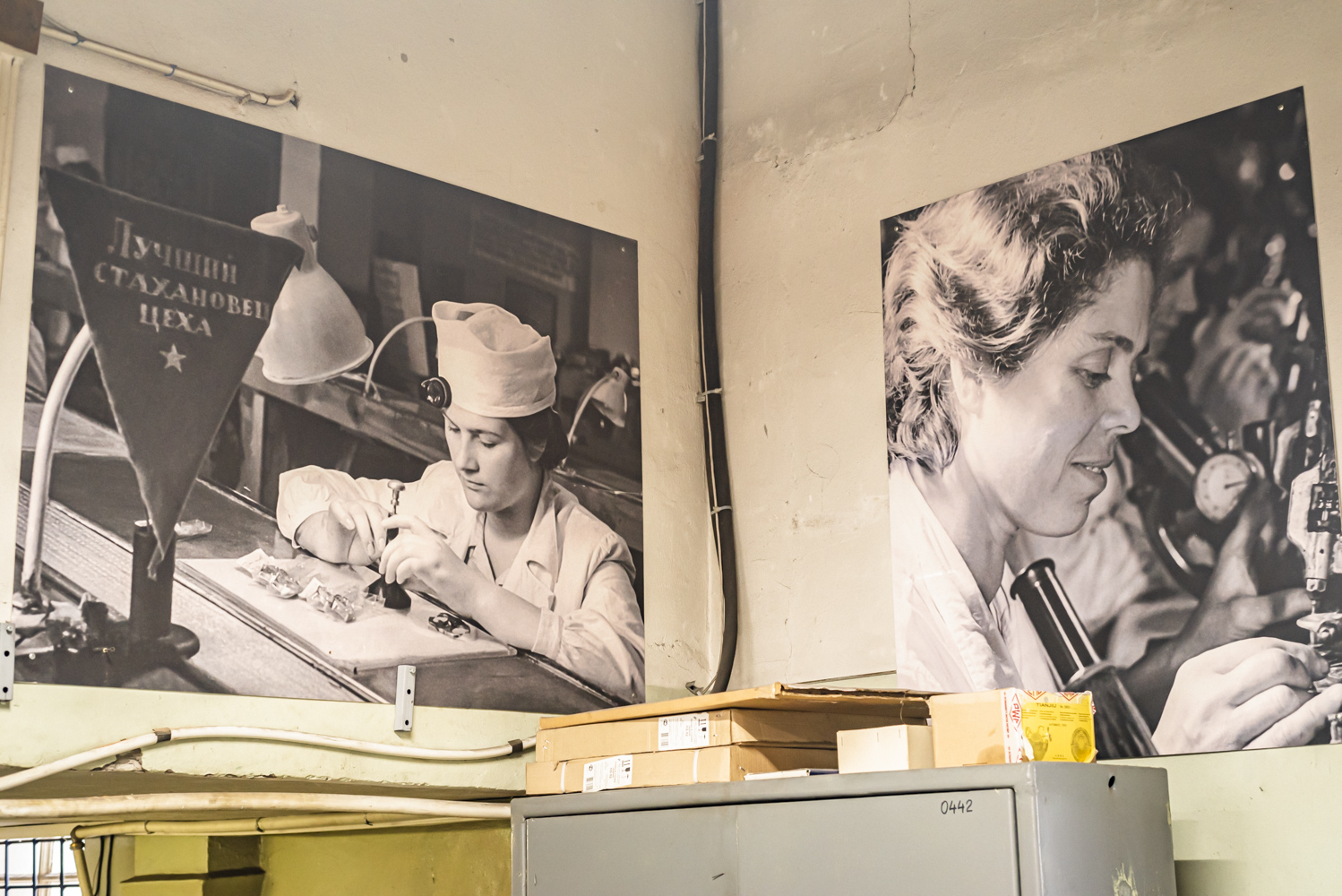 Pictures of the production site during the soviet time are covering the walls of the Raketa factory. At the height of its activity, Raketa was producing five million watches per year and employing 7,500 people on the Peterhof site. The assembling section was mainly composed of women. On the left picture, a flag indicates that the work was the worker of the month. . 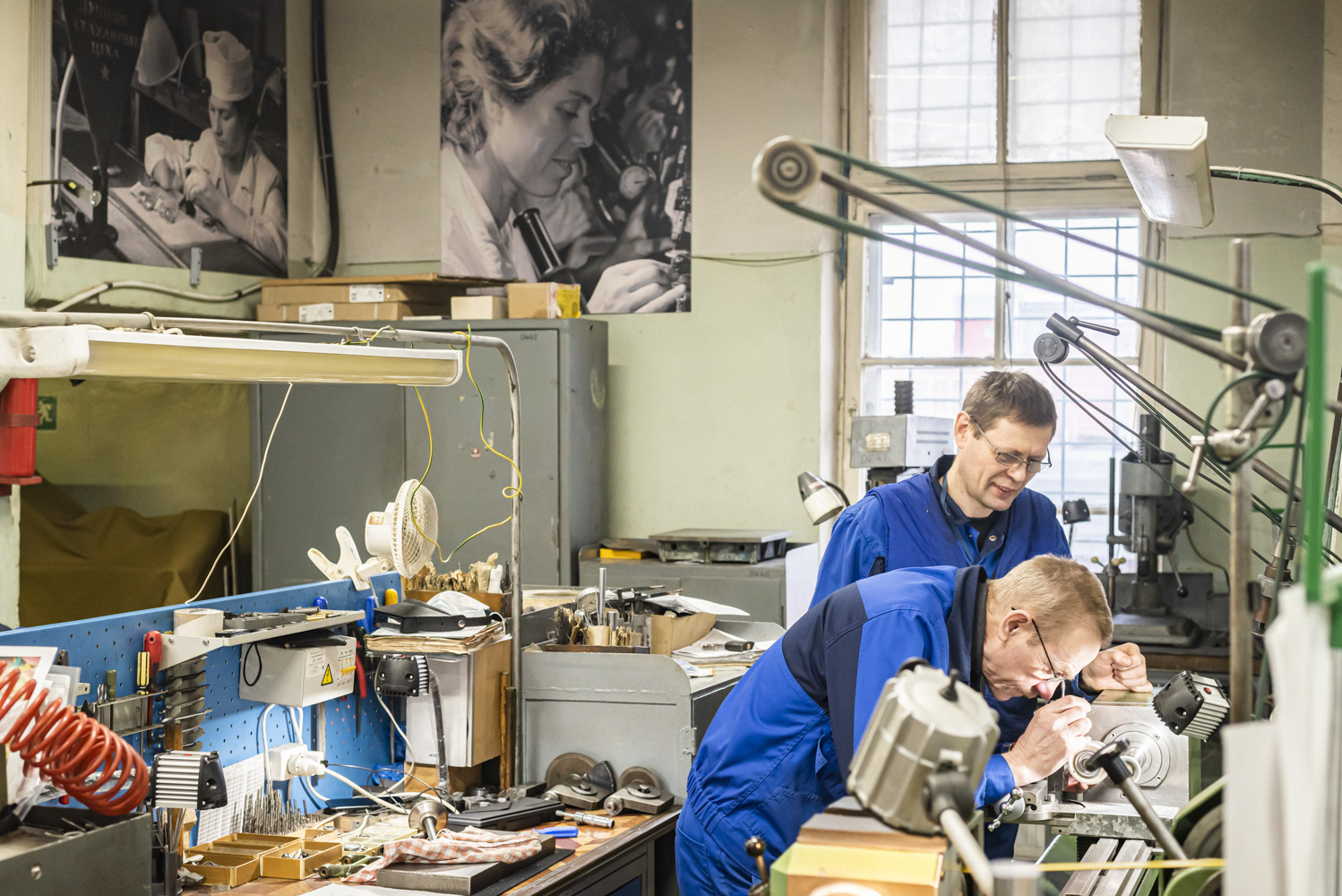 Sergei and Nikolai are creating the tools to make the 242 parts necessary for the fabrication of the watches. Sergei is 51 years old, and he worked for the factory for six years during the 80’s, and had to leave when the company faced difficulties following the collapse of the USSR. The size of the factory and the quantity of the production has changed: “In Soviet times, everybody wanted a watch, now everybody wants a smartphone”. Now, they produce less, but it’s more creative, and workers are asked to bring more solutions, more innovations. In soviet times, one person was doing one task, whereas nowadays, workers are asked to do different tasks. The factory was so big that Sergei did not have any communication with the management. Nowadays, the factory is smaller, so he can talk directly to his manager, which makes him feels at home. 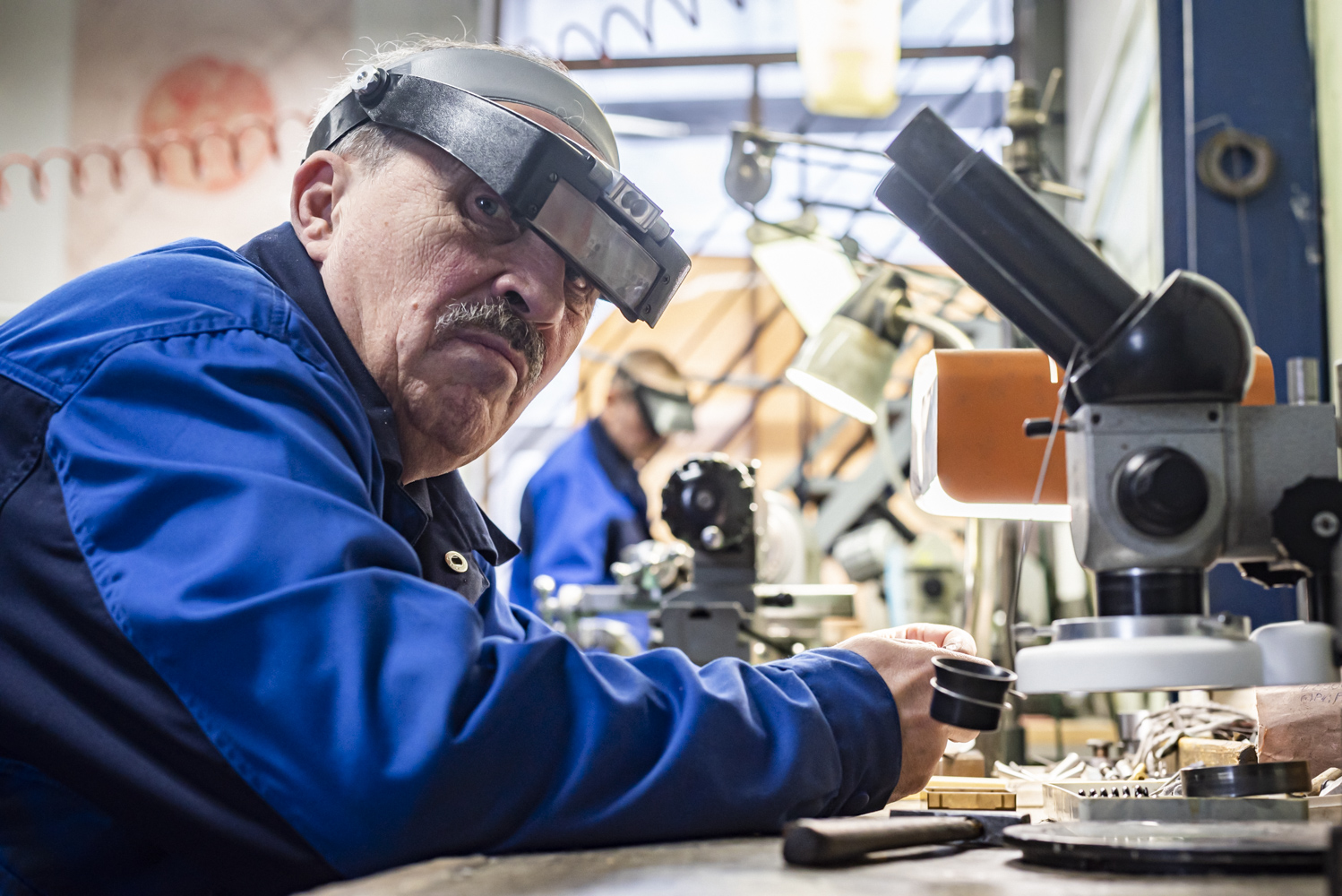 Alexandre Yurivich is checking details at the maintenance section of the factory. 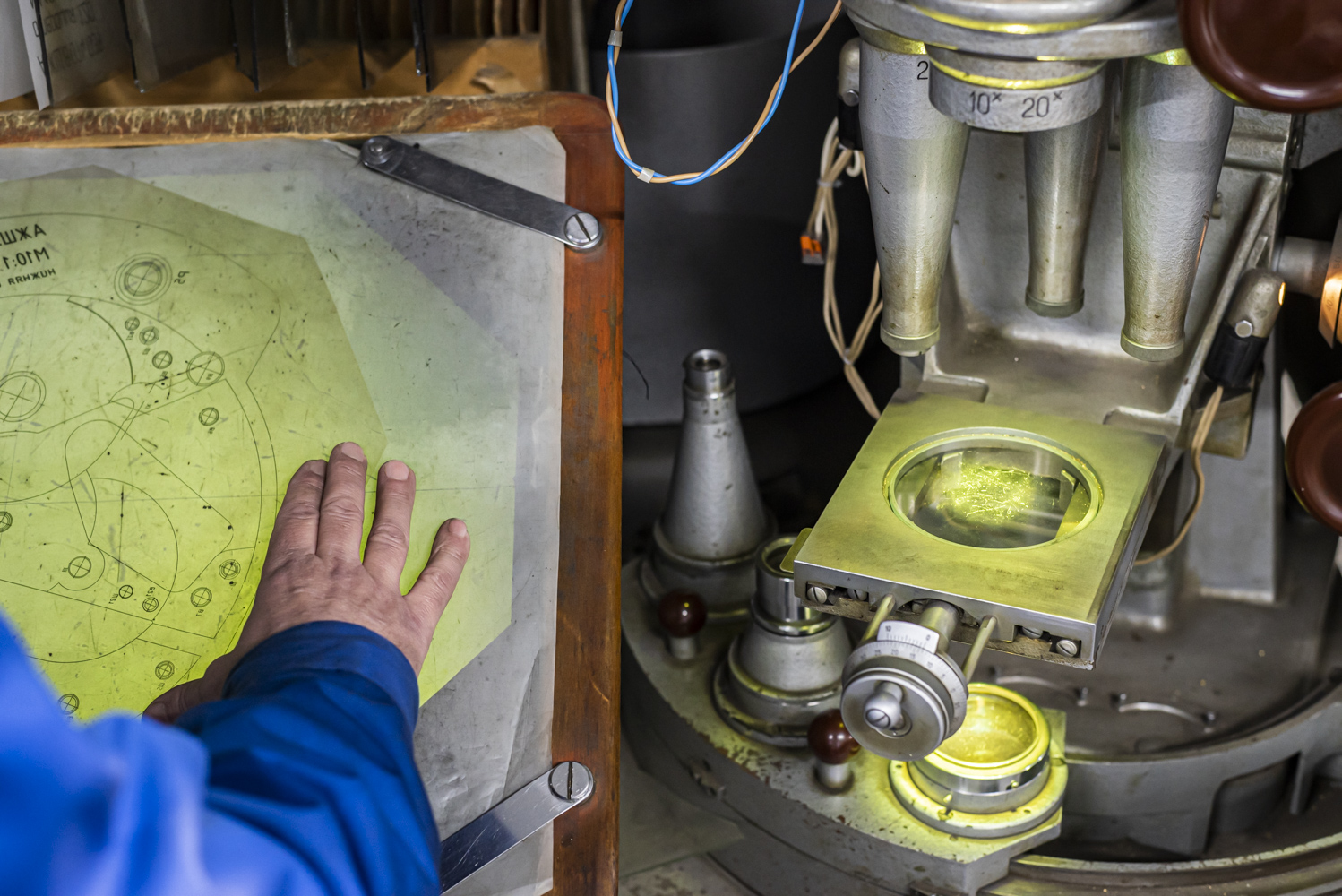 Alexandre Yurivich is using a scheme of the part to monitor/control if the part has any default. 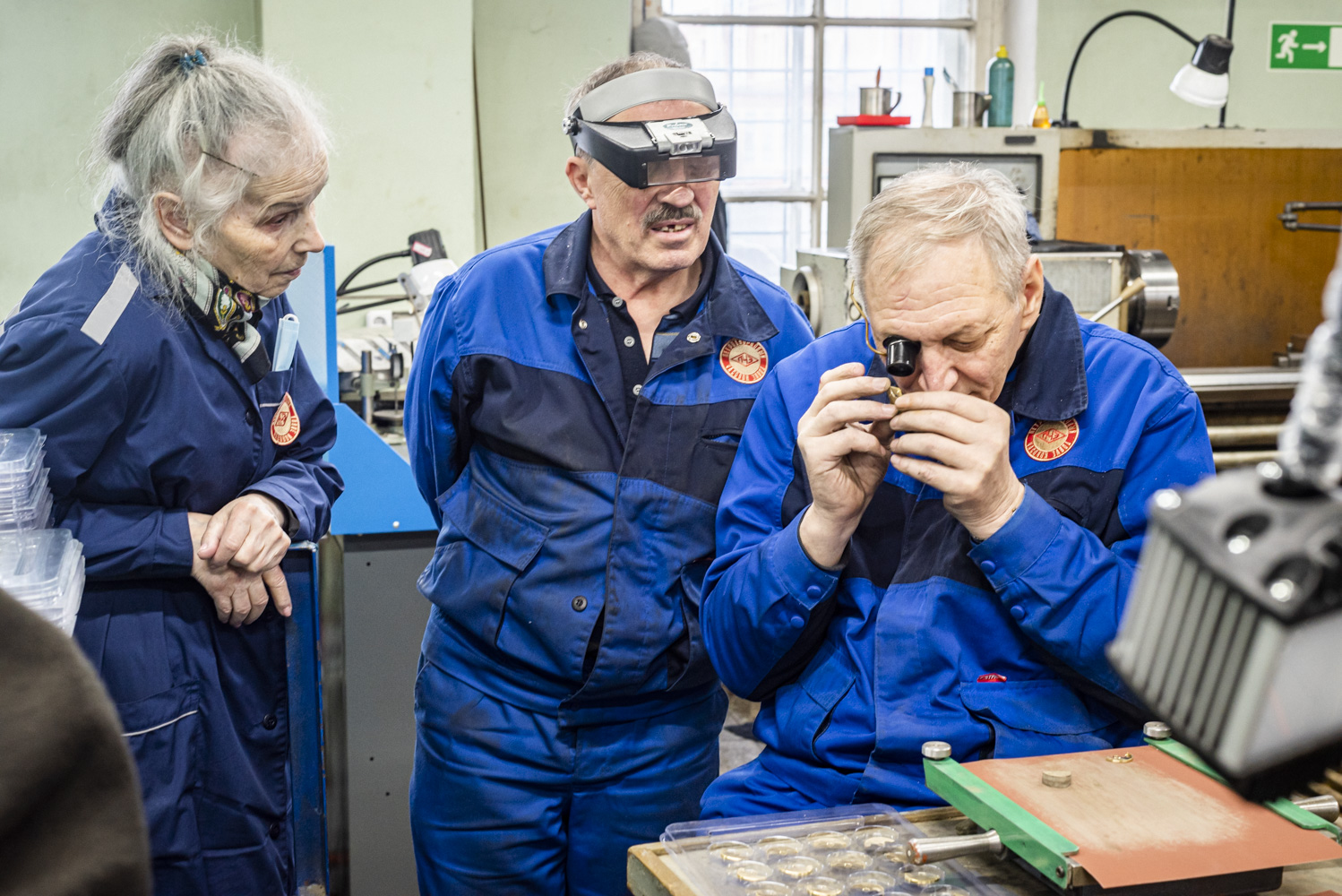 Alexandre and his colleague are controlling a part, with the help of Ludmila, an engineer. Ludmila is 87 years old, and she is the oldest of the workshop. She knows all the workstations on the production site. 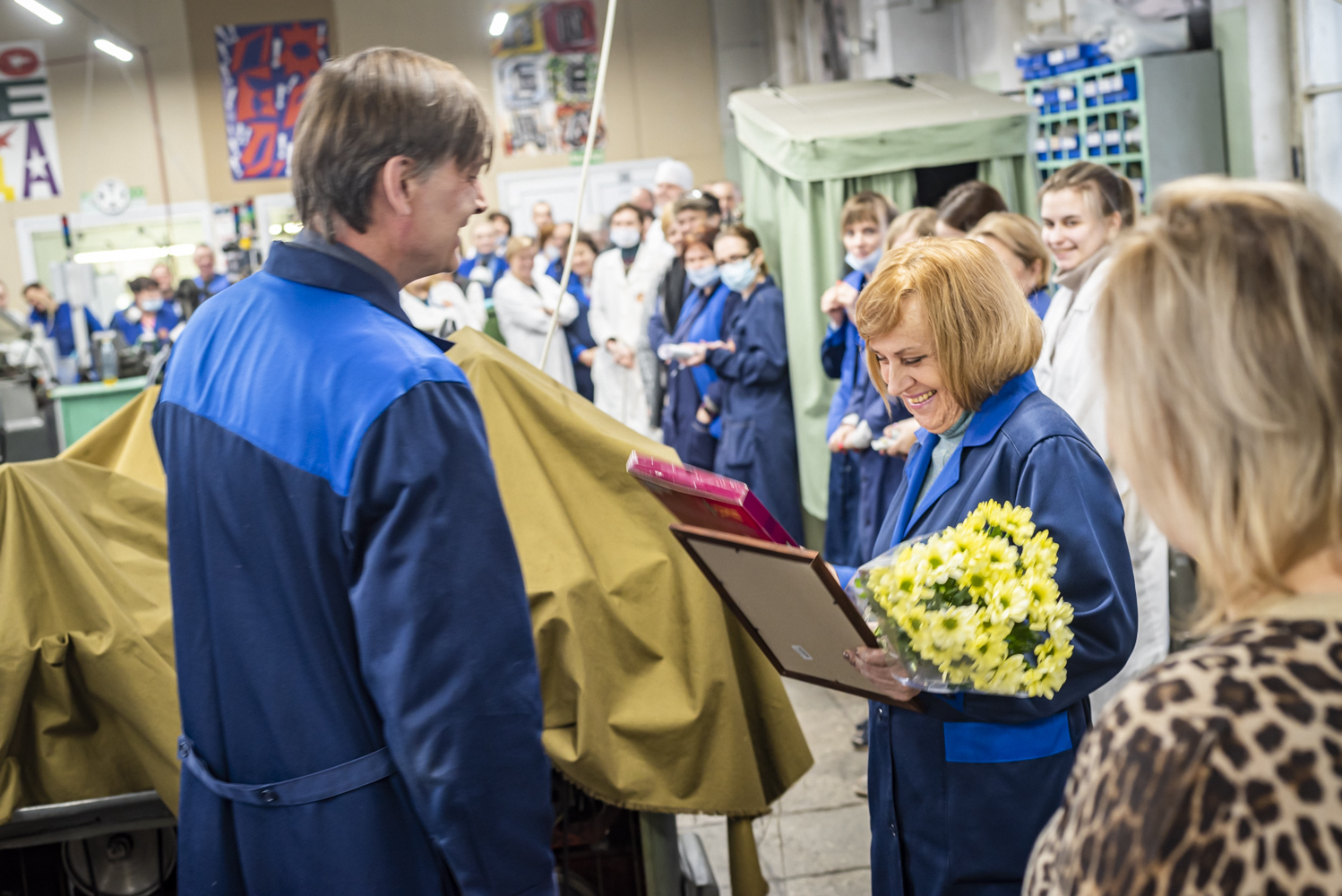 Just before the lunch break, the factory director is congratulating an employee on her birthday under the claps of the workers. 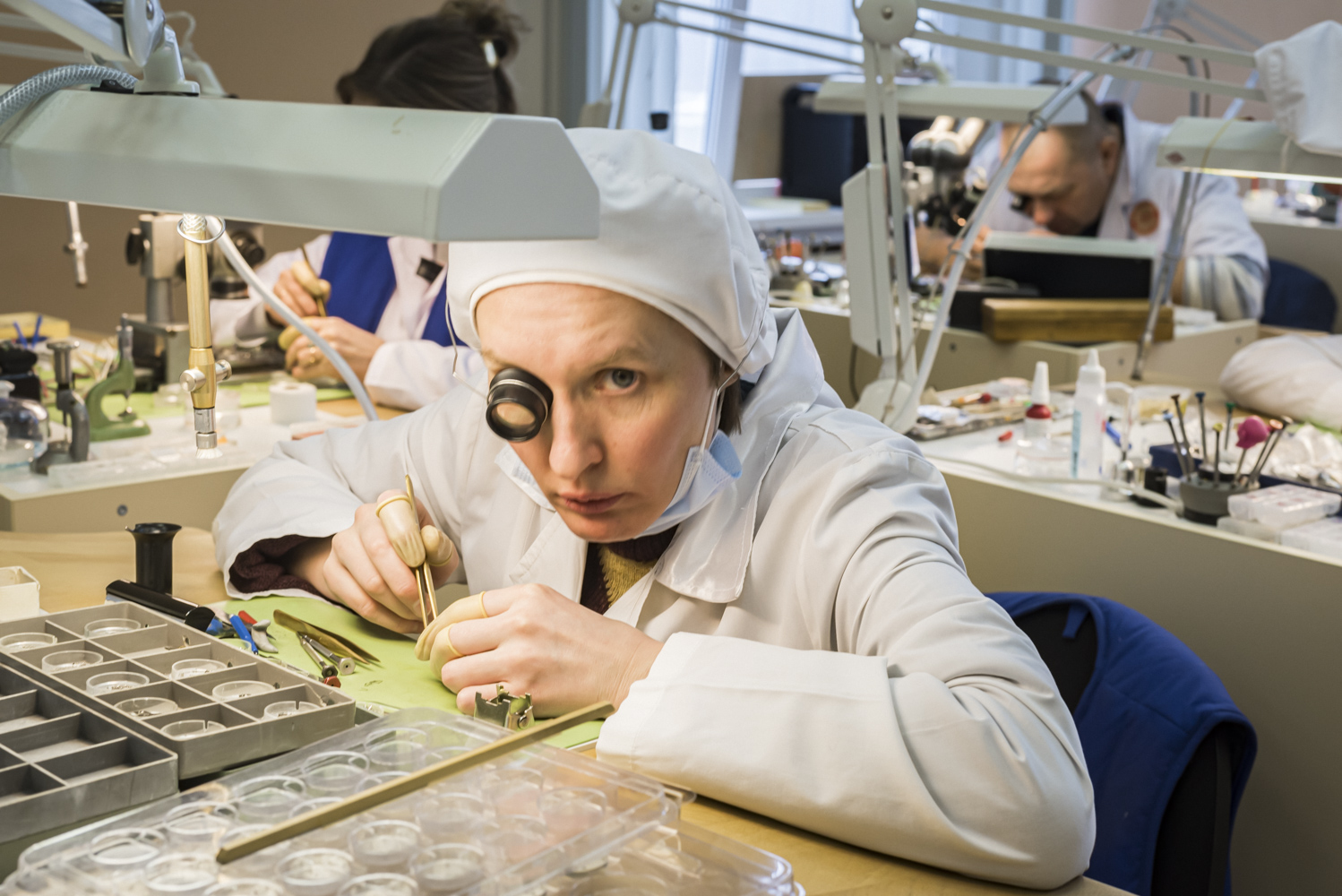 A worker is assembling a Raketa watch in the assembling room. Raketa is one of the few watch brand that is producing and assembling the entire watch on the same production site. 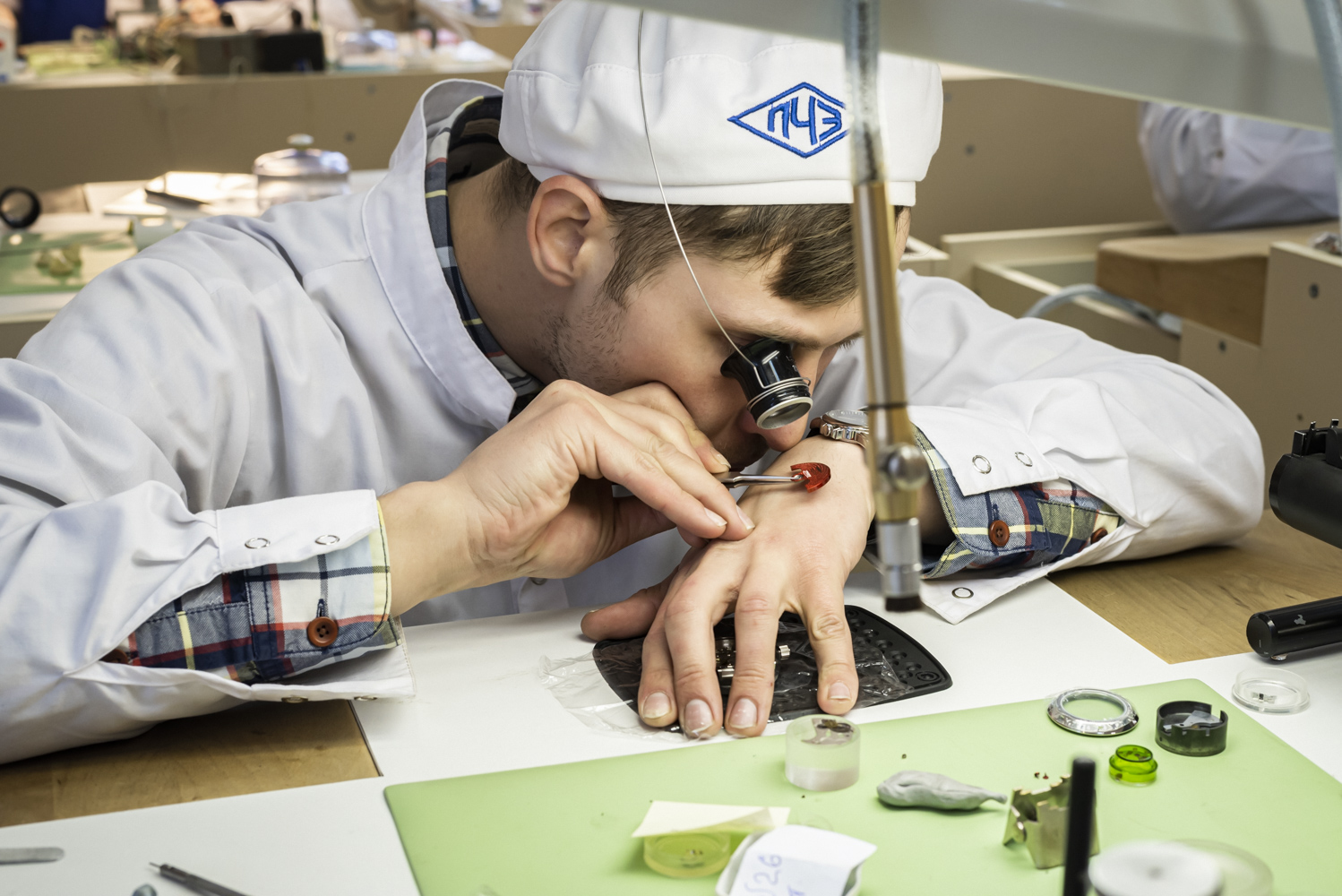 Dimitry is about to install the escapement, one of the key component of the mechanical movement of an automatic watch, which is is made in-house. Dimitry is 28 years old, and he has worked for the factory for the last five years and a half. He applied after finding an open vacancy in the factory. He completed the basic knowledge, which is a three years program. His grandmother worked here in the chemistry department, and his mom worked in the quality department. Before applying, he thought the factory was closed. Like other workers in the factory, he constantly has to explain that the factory exists. Many people in Peterhof believes it was closed a long time ago. According to him, the Raketa watches are not ordinary. They have the spirit, history and the Russian soul. 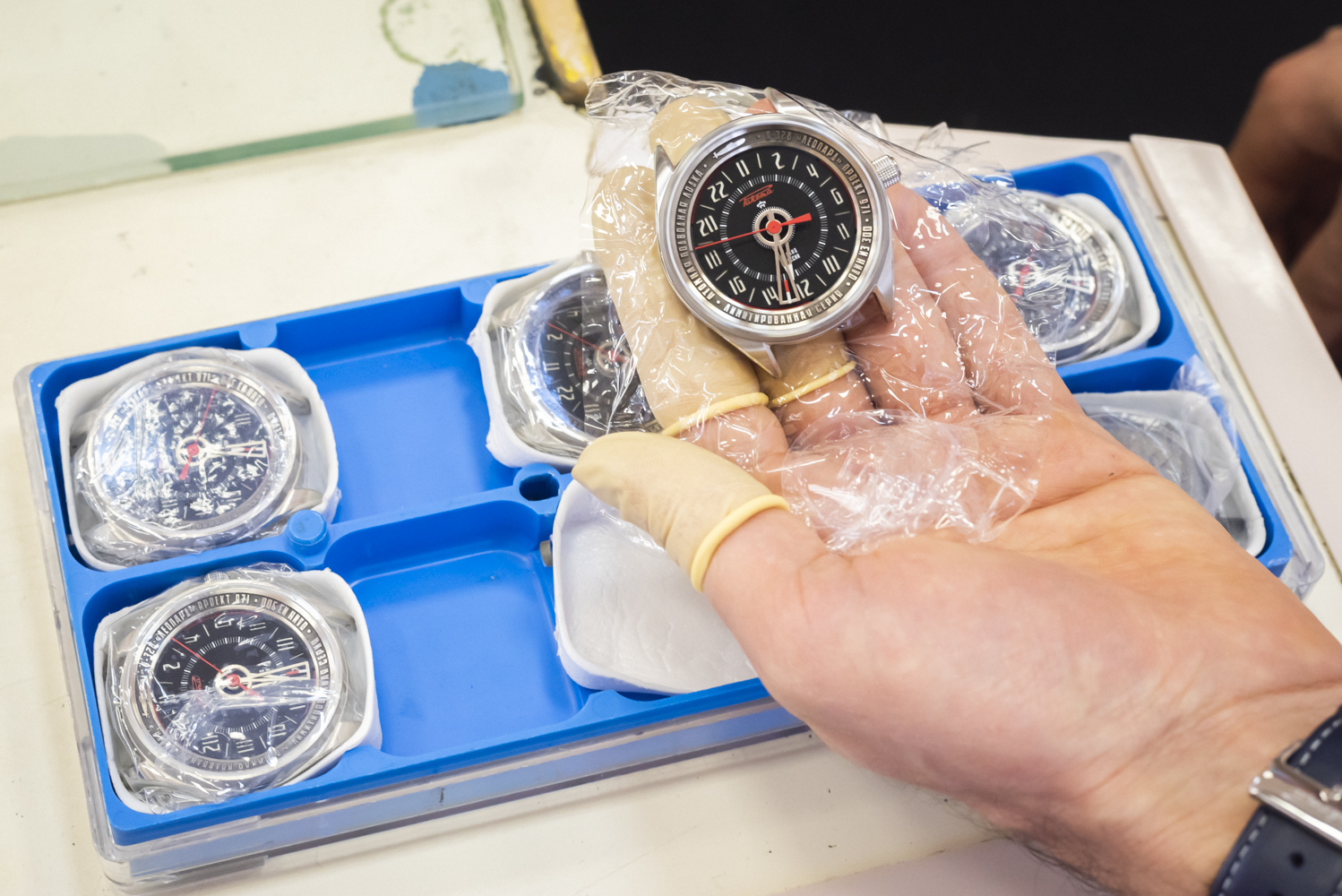 The watch « Leopard 24 » is ready to be sent to the watch shops. This collection is made with a piece of a real « Leopard 24 » submarine. The thematics of Raketa watches vary between sea, polar circle and space anything referring to extreme conditions. 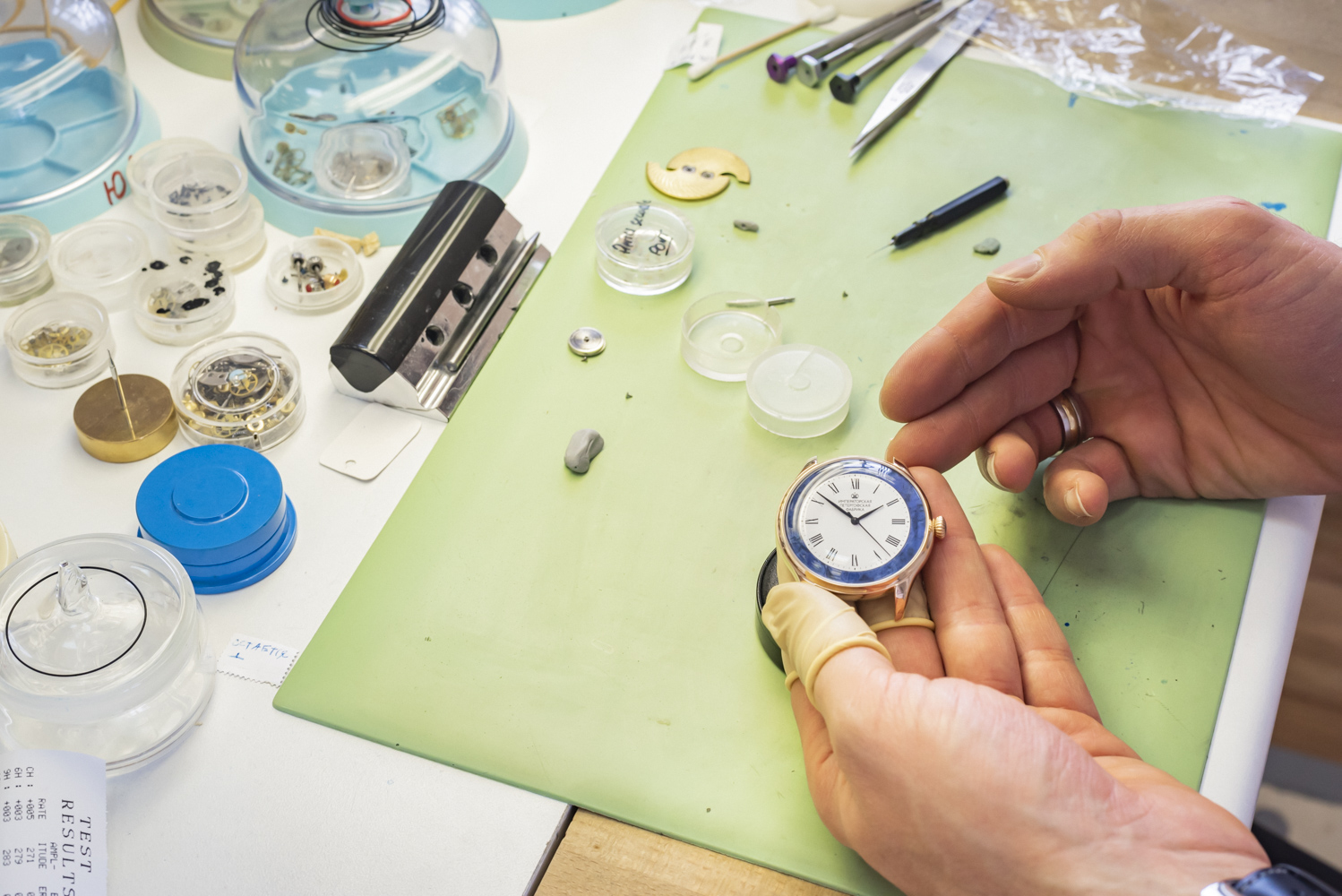 A case ring of an upper-end model of a Raketa watch (Peterhof Imperial Factory) in Lapis-Lazuli, a Russian semi-precious stone. The case is in gold, and the watch is 100 Russian. This upper-end collection targets the Russian market and is available only in pre-order. It follows the statement that men do have not many occasions to wear semi-precious stones. 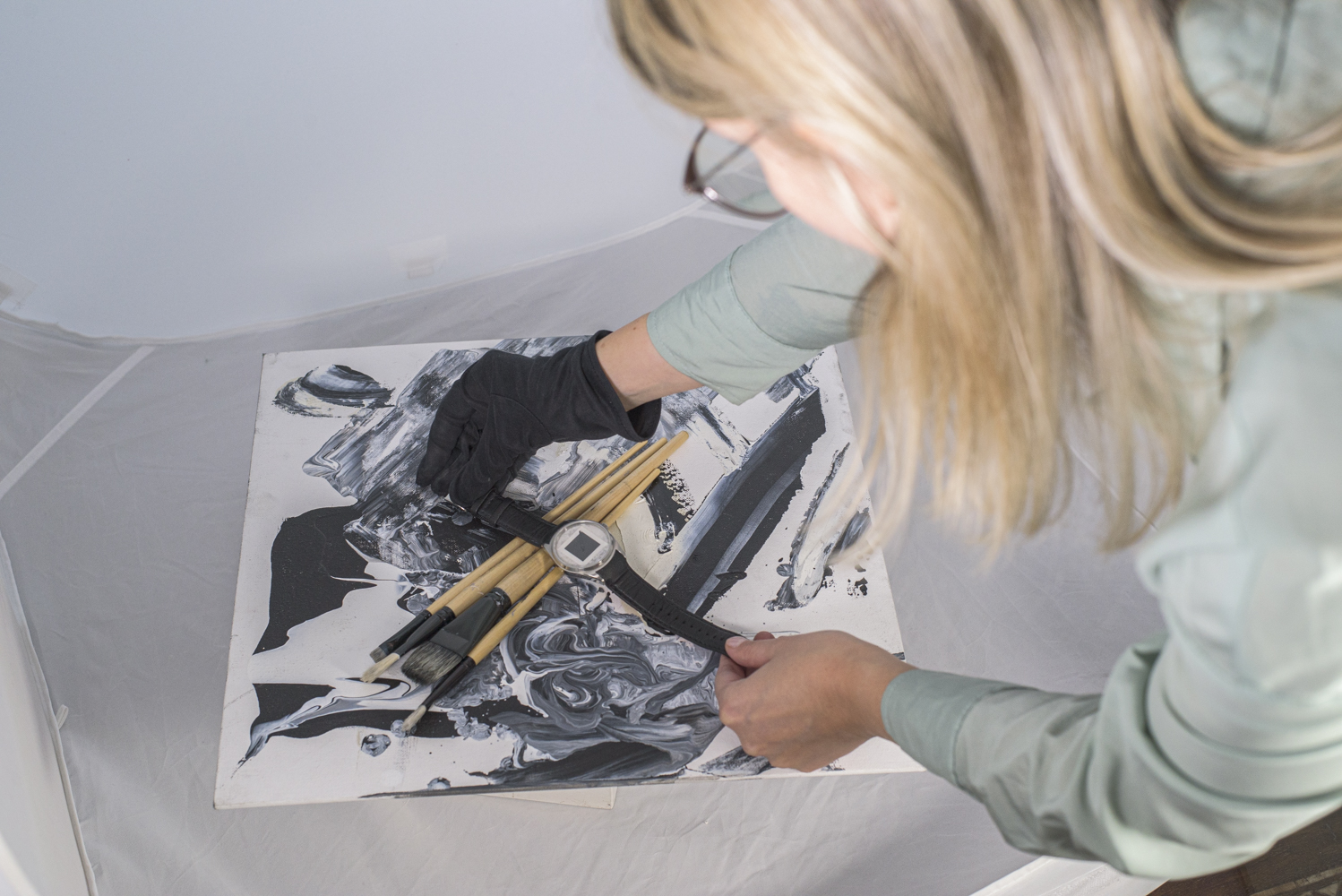 Evgenia is installing the Malevitch watch before a photo shoot in Raketa Creative Studio in Moscow. Dor the last years, a great attention is paid to social network communication, and many contents are created in house.

Evgenia is the main designer at the Raketa Creative Studio in Moscow. She was the first to be hired in Moscow, and she has been working for Raketa for ten years. In the beginning, they used the leftover spare parts of watches for the new collections. They implemented the automatic system in 2014. It took one or two years to put the technology in place. During the Perestroika time, the factory stopped, whereas in Switzerland, they continued to innovate and to develop new technologies. It took time for the factory to cope with this delay. 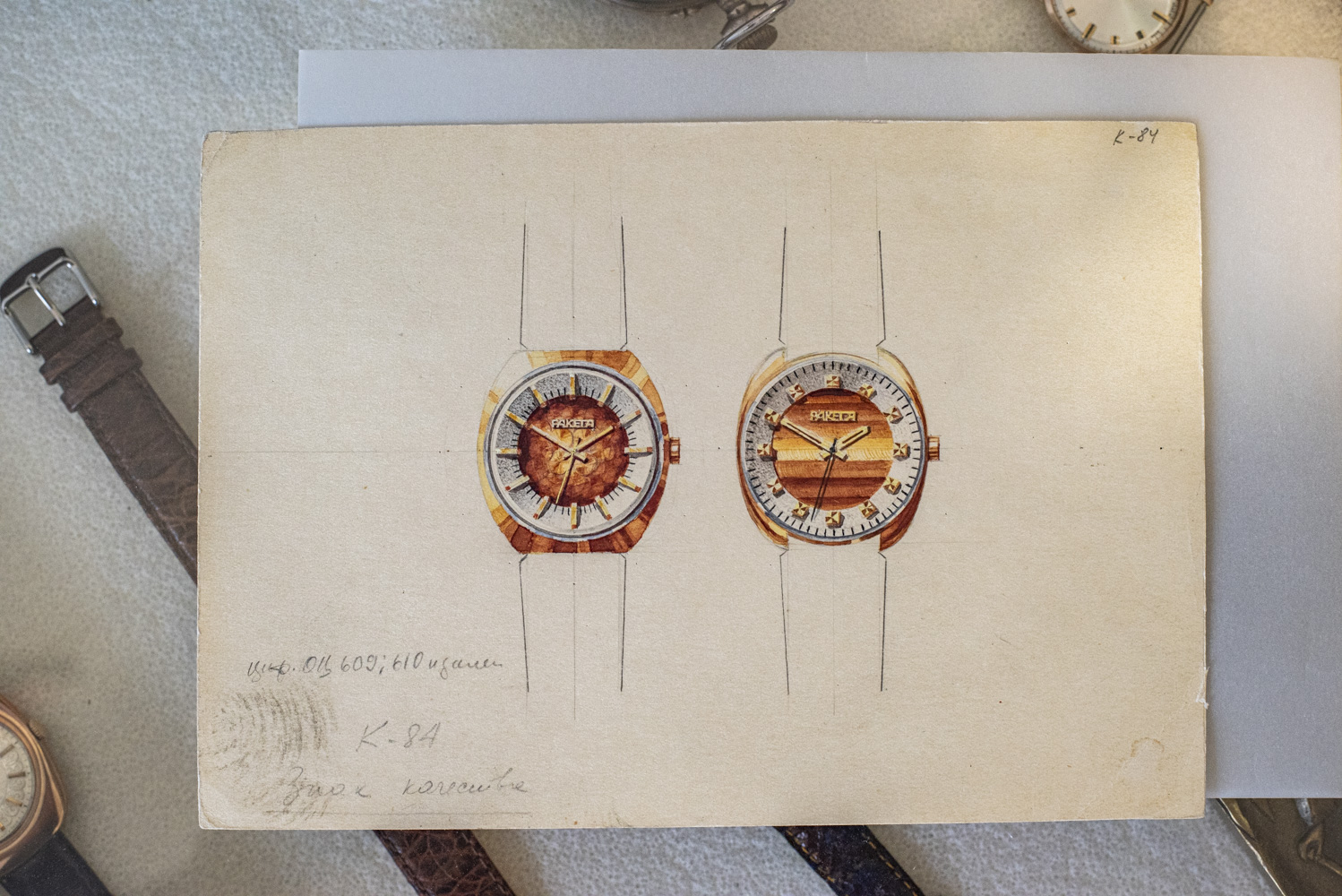 At the Creative Studio, there are hundreds of old sketches of Raketa watches, dating from 1965 to 1998. The old sketches were made with watercolors. During the USSR, the diameter of watches was 36/38 mm, but in 2015 and 2016, the trend was larger diameters, like 42/46 mm. Now, men want smaller sizes. 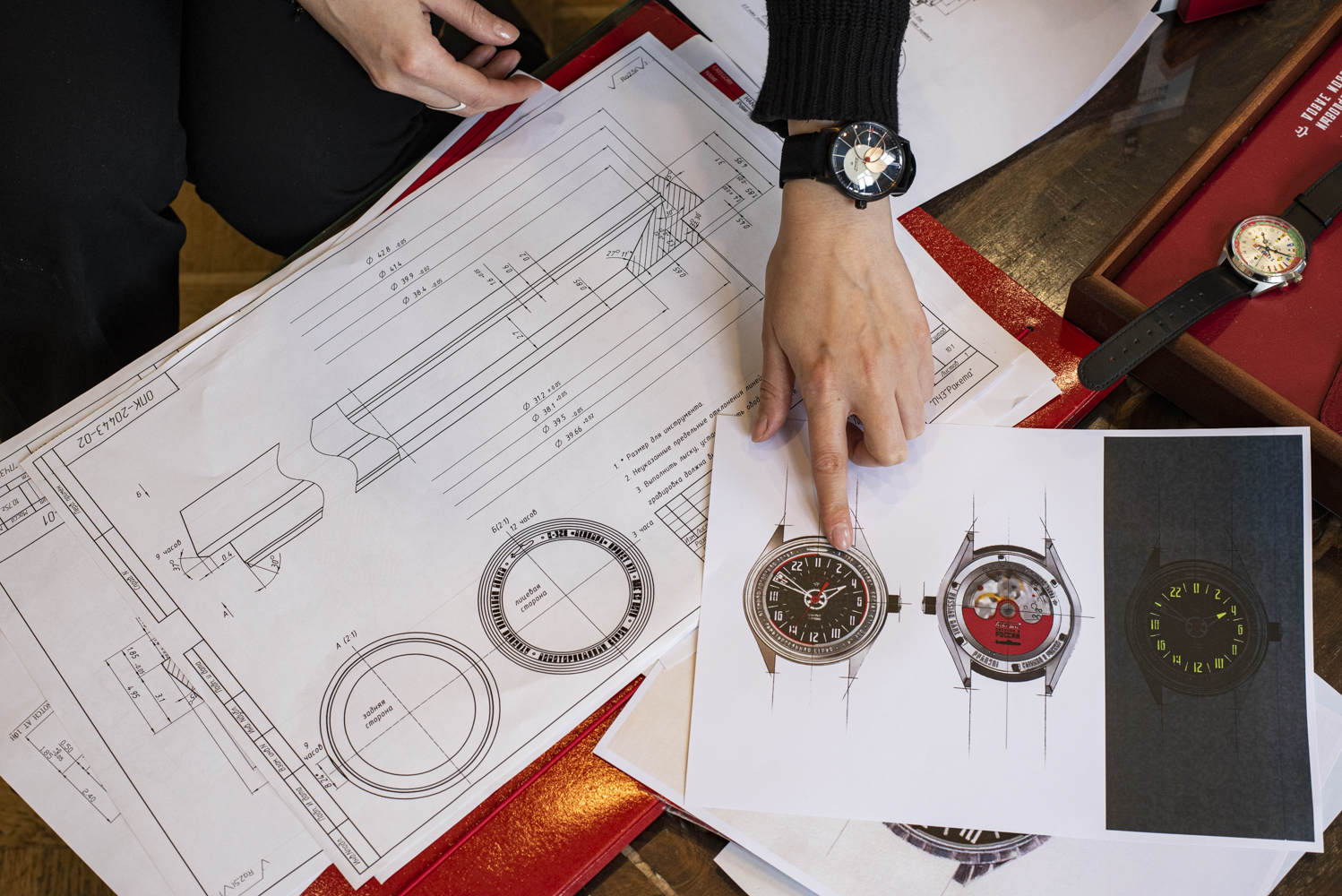 When she designed the Leopard 24 watches, she went to the museum of submarines in Moscow, to feel like submariners and to get inspiration. She even interviewed submariners to get inspired in the design. Her dream is to make the brand the Russian equivalent of Rolex, a worldwide known brand. She compares Raketa to Rolex as they are part of the five brands that produce all the parts in-house. 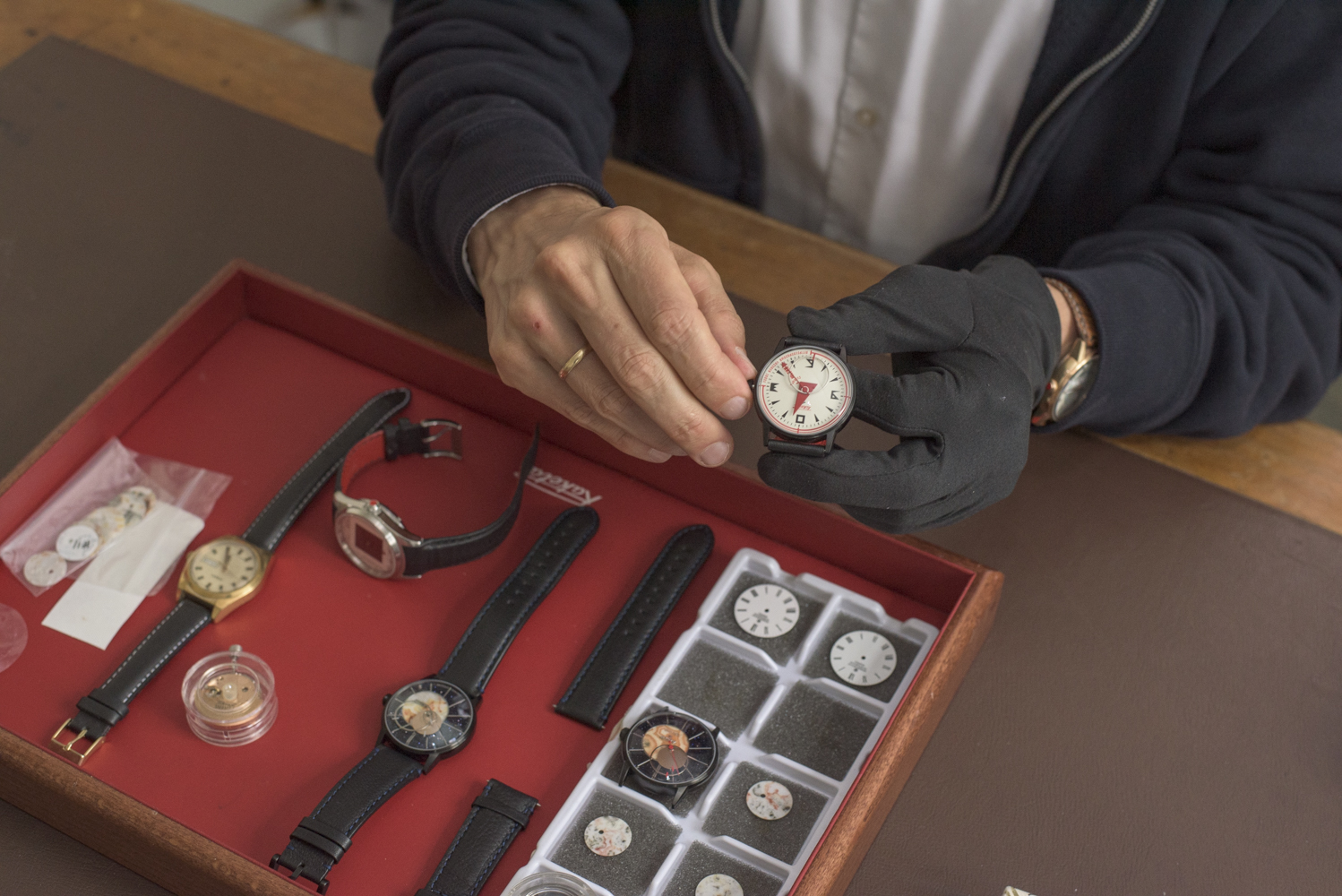 David Henderson-Stewart, director of Raketa, holds in his hand the “avant-garde” watch, a model created in reference to the avant-garde artistic movement, which emerged during the Russian Empire and in the USSR at the beginning of the twentieth century. 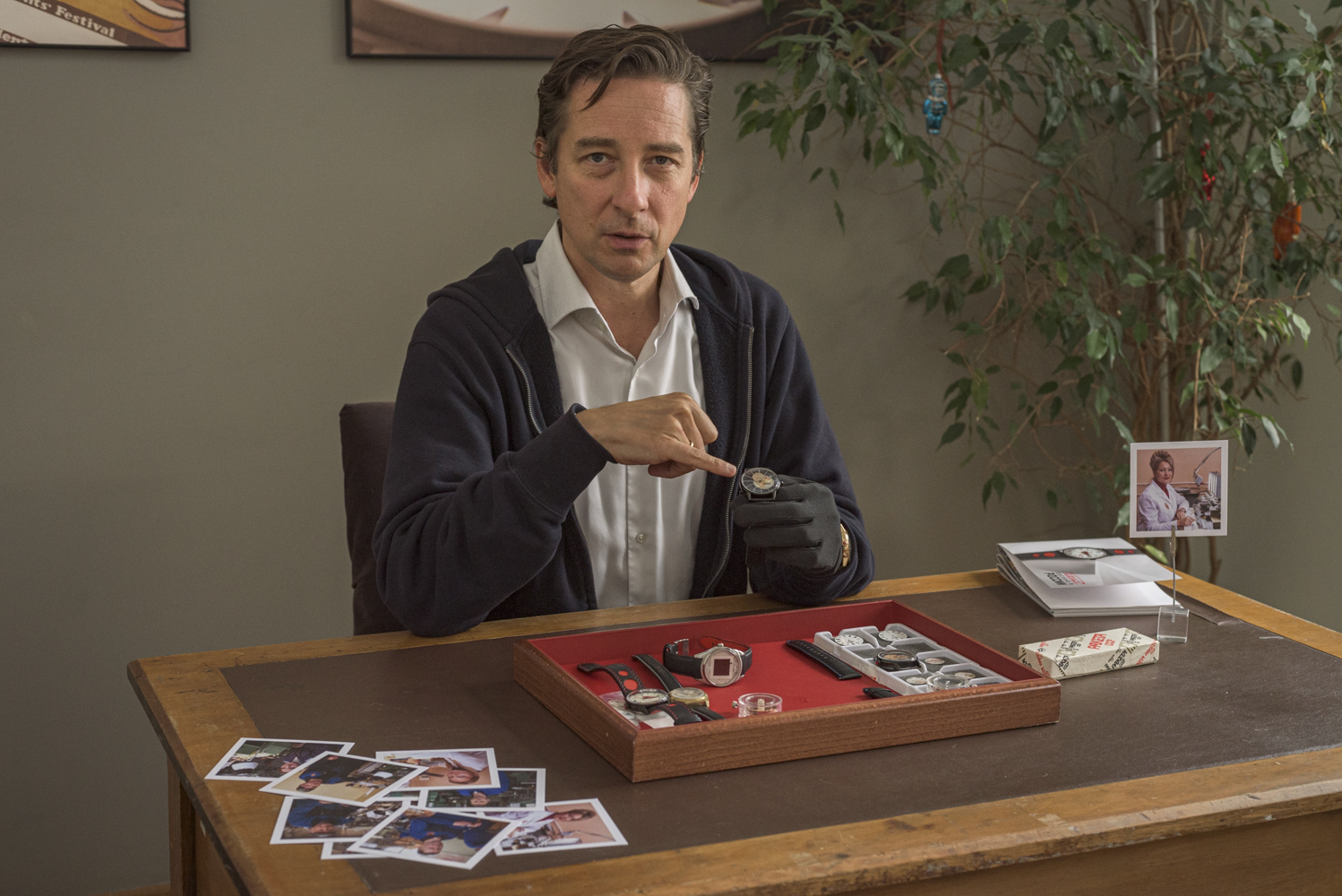 David Henderson-Stewart, director of Raketa, holds in his hand the "Copernicus" watch, a model created in reference to space, the redundant subject of Raketa watches.