In the mountains of Khoja Obi Garm, north of the capital of Dushanbe, many Tajiks come to enjoy radon baths and steams, a slightly radioactive gas, with supposed relaxing and painkilling properties.

This “sanatorium” (from the Latin “sanare” – to treat, to cure) is one of the rare vestiges of the USSR still in activity, in this small mountainous country located in the north of Afghanistan. Here, the hot springs, containing radon, spring directly from the surrounding mountains. As early as 1935, Khoja Obi Garm welcomed its first visitors, who then lodged in tents. It was in the 70s and 80s that this spa resort took on another dimension, with the construction of a unique hotel complex, in an architectural style marked by Soviet brutalism, and of colossal dimensions.

From 1974 to 1986, the Soviet authorities built three monumental blocks on the mountainside. Each one hundred meters long, they could accommodate a large audience from the fifteen socialist republics. The Soviet labour code guaranteed two weeks of vacation to workers and recommended that they be taken to sanatoriums. At that time, Khoja Obi Garm had the title of “spa of the whole union”, and saw boarders from all over the USSR, who landed by train or plane from Vladivostok, Riga or Yerevan.

With the fall of the Soviet Union, followed by the Tajik Civil War (1992 to 1997), the sanatorium was abandoned and lost its flow of Soviet tourists. In 2010, this unique place benefited from a national renovation plan and has become a privileged vacation spot for Tajik holidaymakers, who come to enjoy the spa resort in winter and the coolness of the mountains in summer. For around 20 euros per day in full board, numerous treatments are available, such as hot water baths, or radon steam hammams. In the greatest Soviet tradition, each stay begins with the consultation of a doctor who prescribes a list of treatments to be performed.

Every evening, after dinner, the residents meet in the auditorium located in a monumental annexe. With its imposing red curtains, its stage welcomes traditional musicians and singers. In this singular place, an audience performs Tajik dances, under an imposing chandelier dating from the USSR, like an allegory of the reappropriation by Tajikistan of its Soviet heritage. 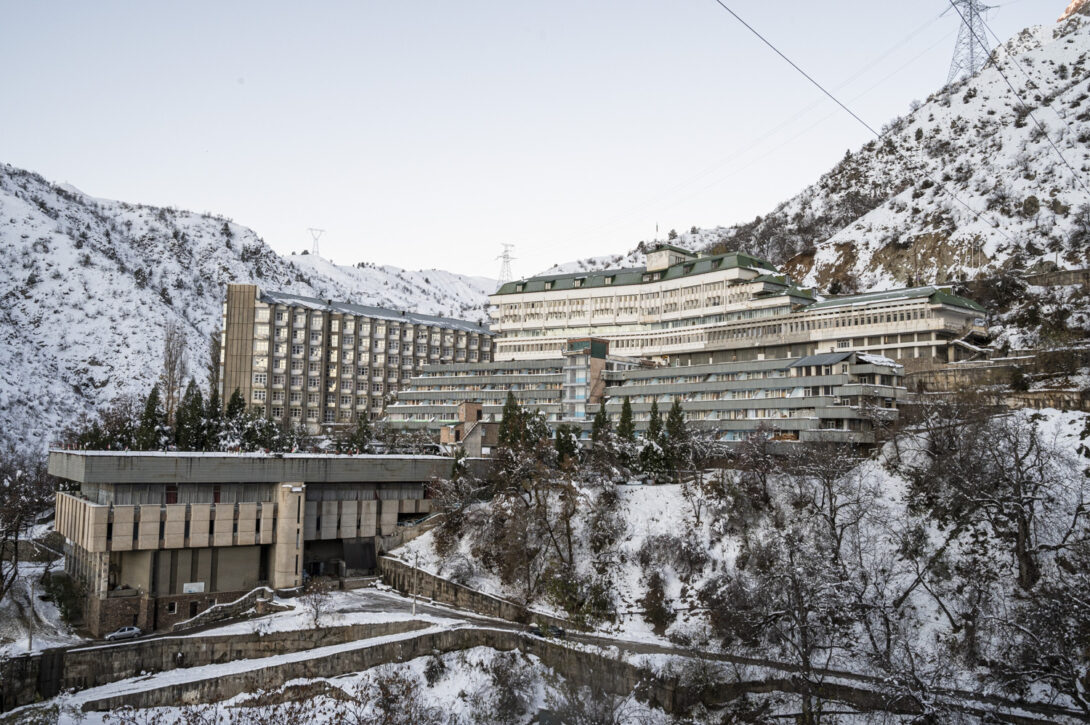 View of Khoja Obi Garm sanatorium, located 1960 meters above sea level. At the top, several residential bars are 100 meters long and accommodate hundreds of rooms. At the bottom left, a cube of 2000 square meters contains the refectory on the first floor and the auditorium on the ground floor. 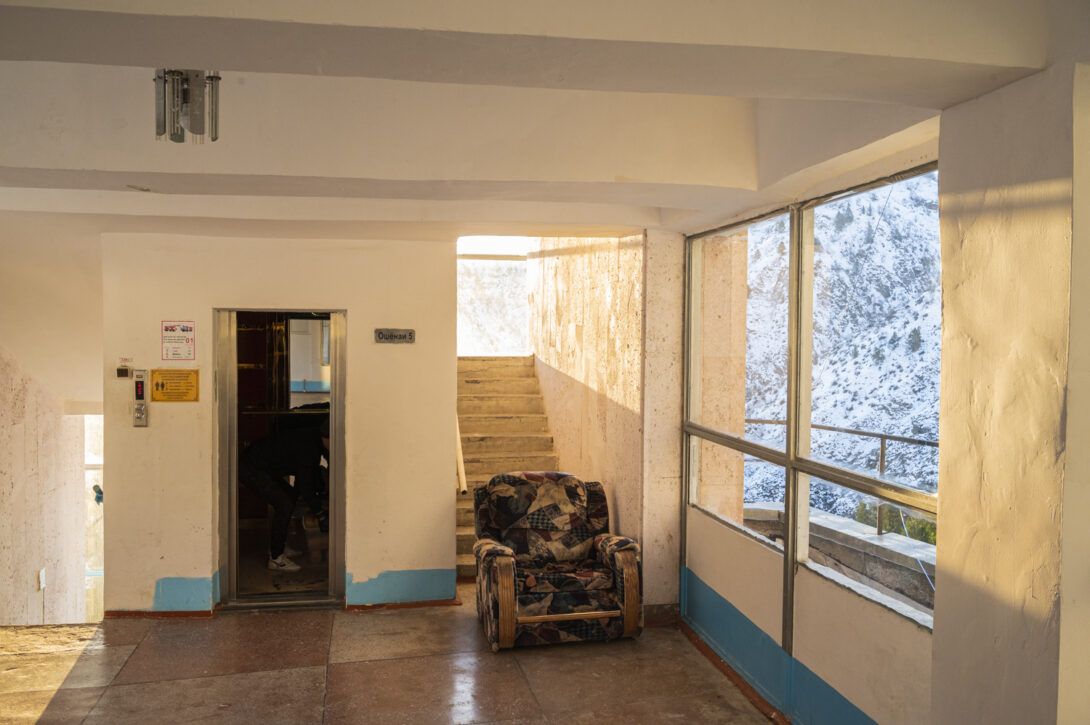 One of the many elevators that connect the different floors of the hotel complex (about fifteen floors). An armchair has been installed to allow residents to rest while waiting for the elevator. 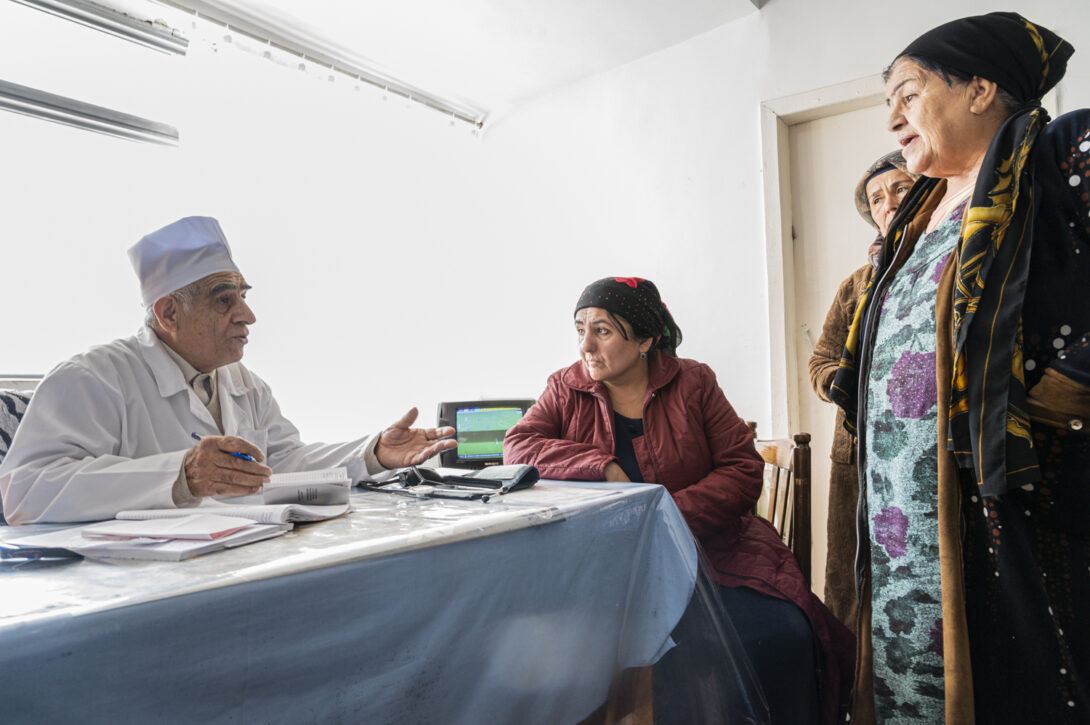 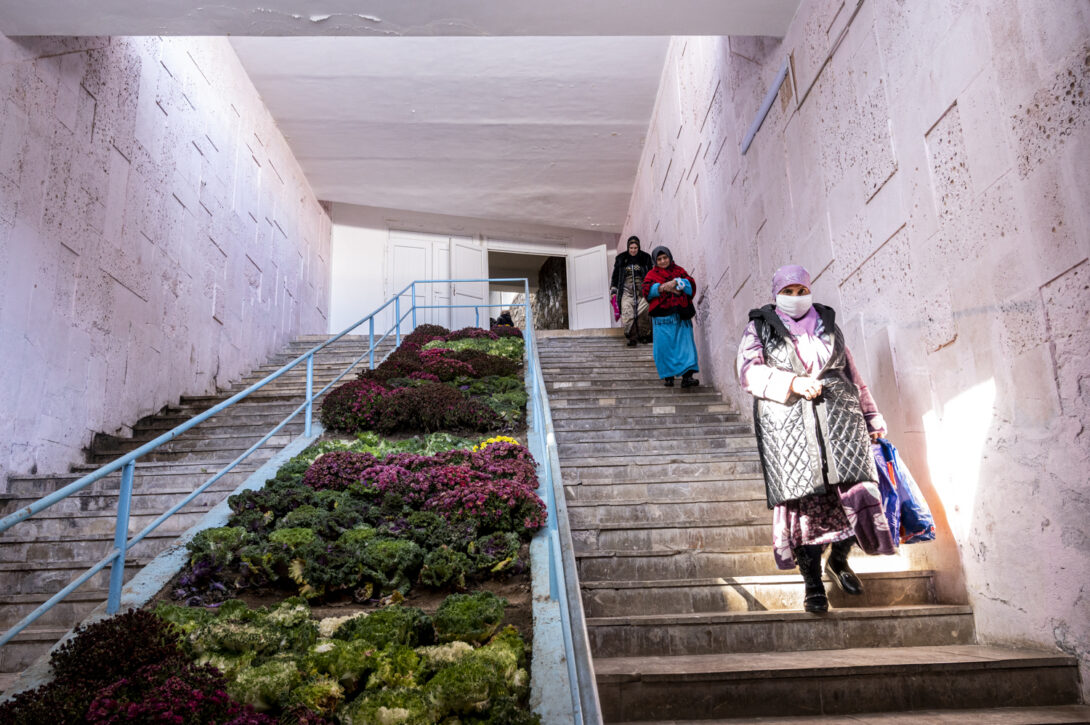 Women are walking towards their next treatment. Wrapped up in large dressing gowns, they carry their towels and care kits with them in their plastic bags. 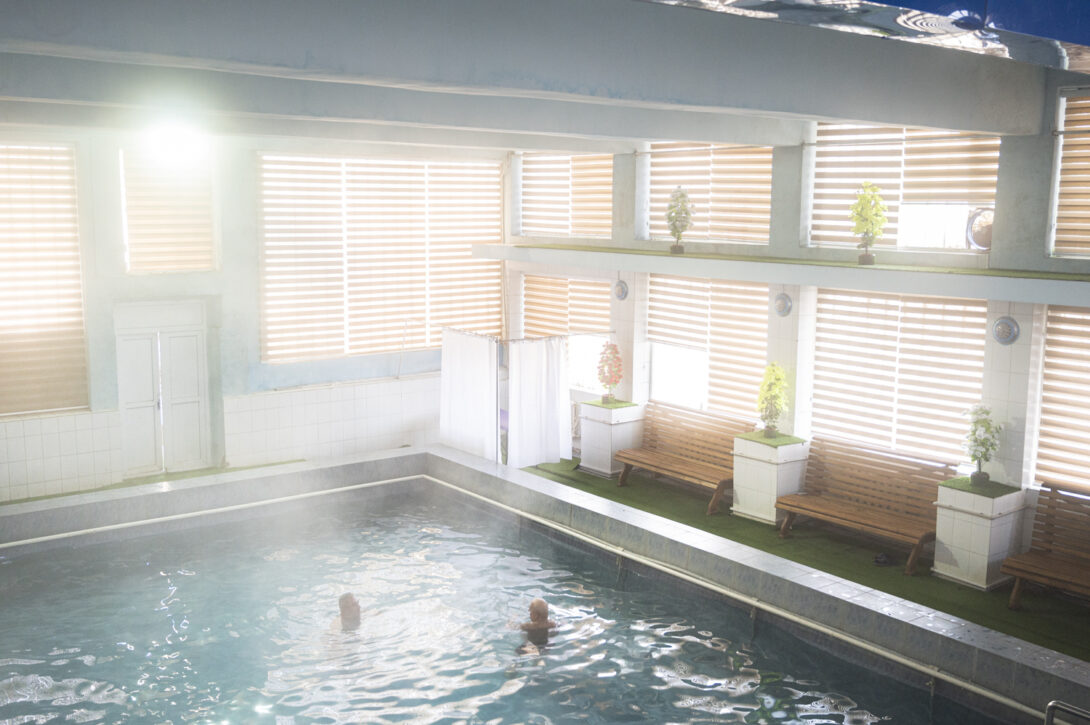 Residents take a radon hot water bath in the establishment's indoor swimming pool. This 8 by 15 meter swimming pool is one of the main activities of the sanatorium. 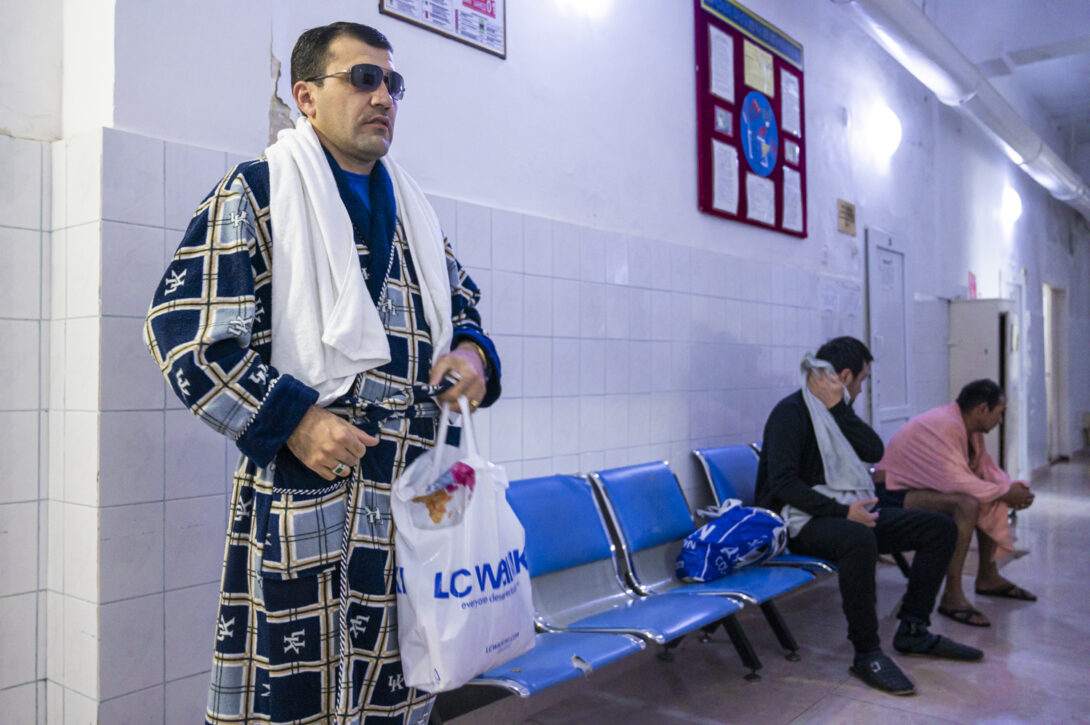 Azamath, 36, is looking at himself in the mirror after bathing in the radon bath. He came to the sanatorium to rest with his family. Like many Tajiks, he worked for 8 years in Russia, and now he would like to get married. Holidays at the sanatorium are also an opportunity for potential encounters. 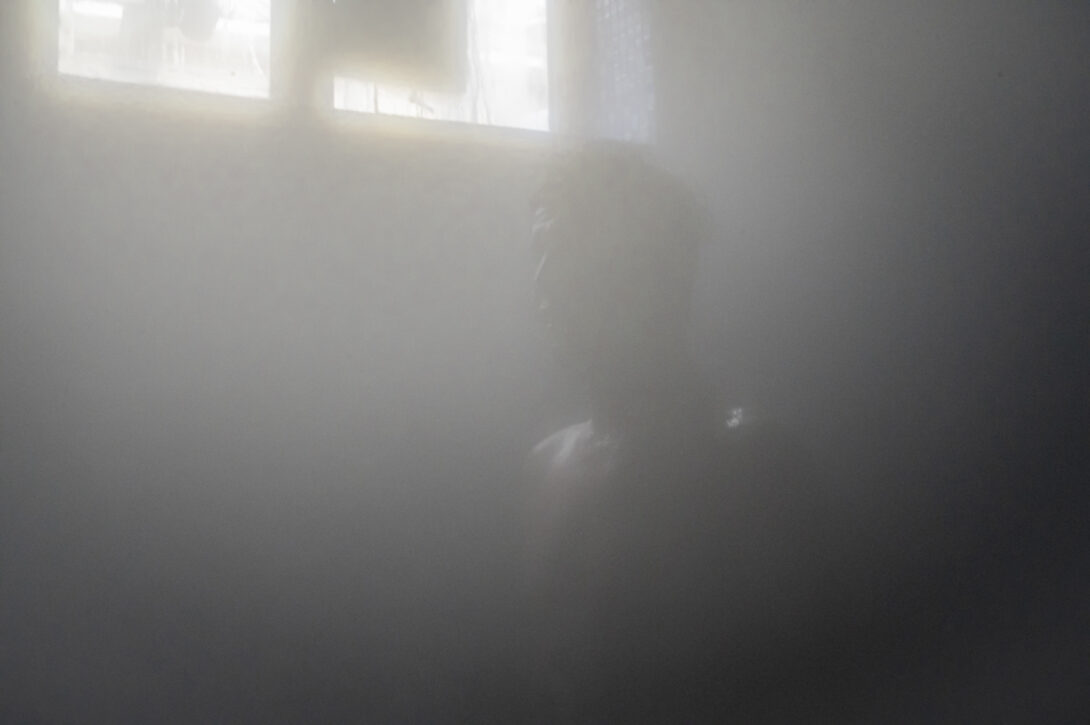 Early in the morning, a resident does a radon vapour hammam in an annexe located as close as possible to the springs. For many Tajiks, radon is said to have many health-promoting properties. 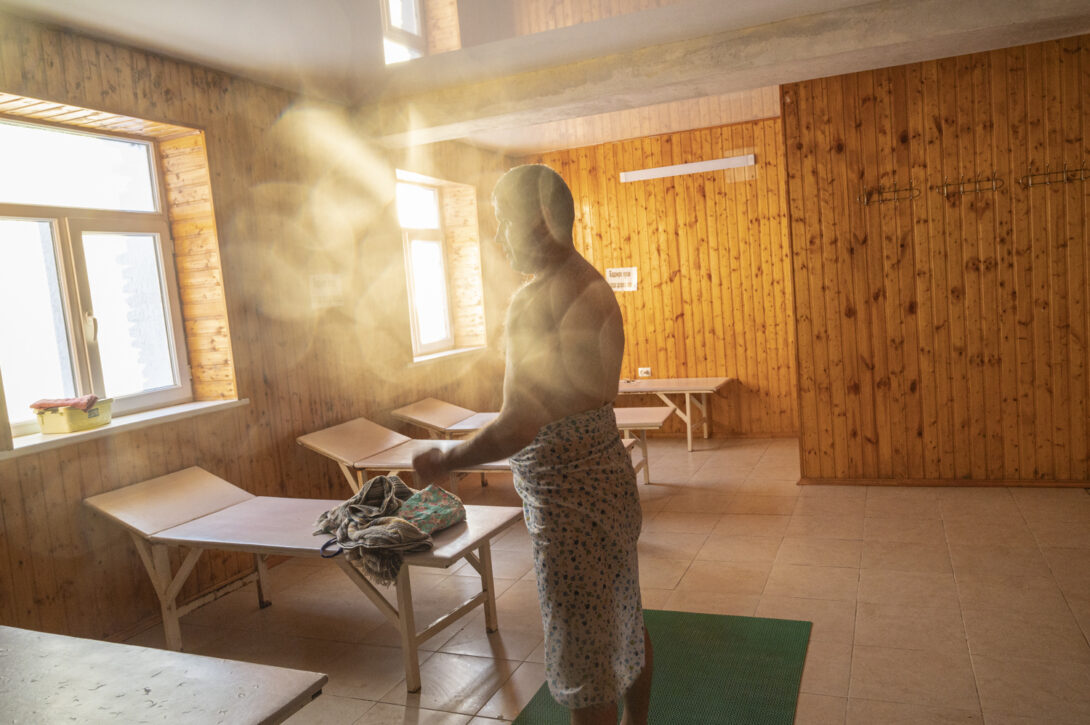 Hussein, 53, rests between two radon hammams. He has been resting at Khoja Obi Garm Sanatorium more than twenty times. Although there are many sanatoriums in Tajikistan, this one remains his favourite because of the radon baths. 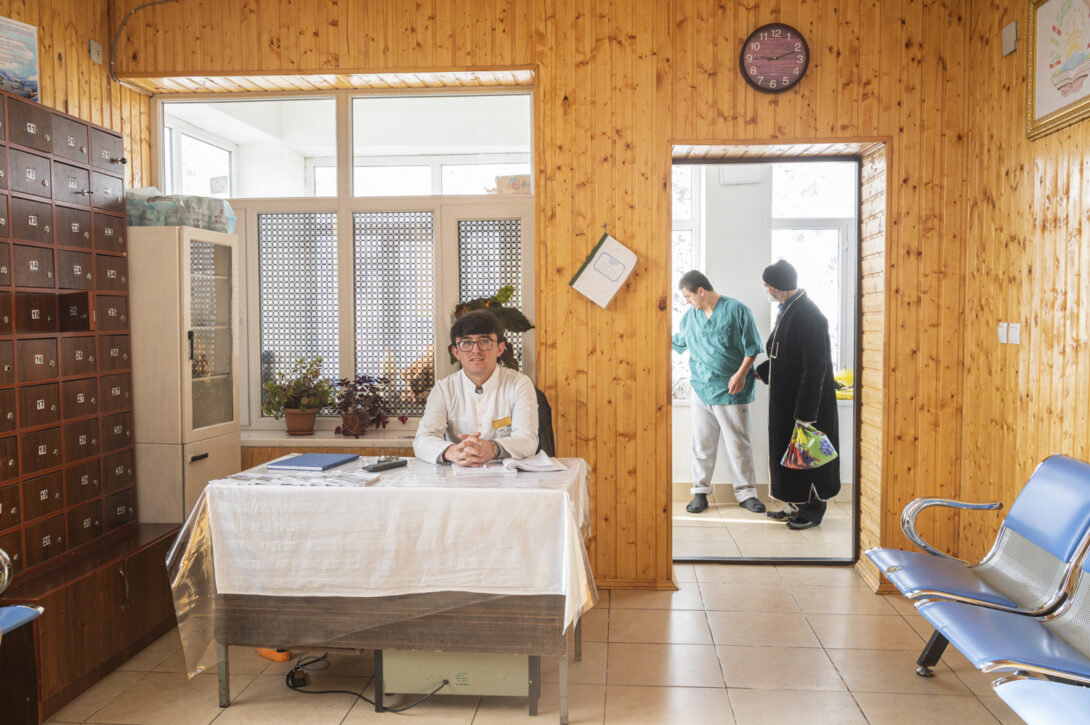 At the entrance to the hammam, a staff member checks the prescriptions in the small notebooks issued at the beginning of any stay. Visits to the hammams are reserved for men very early in the morning, then for women during the day, and for men in the late afternoon. 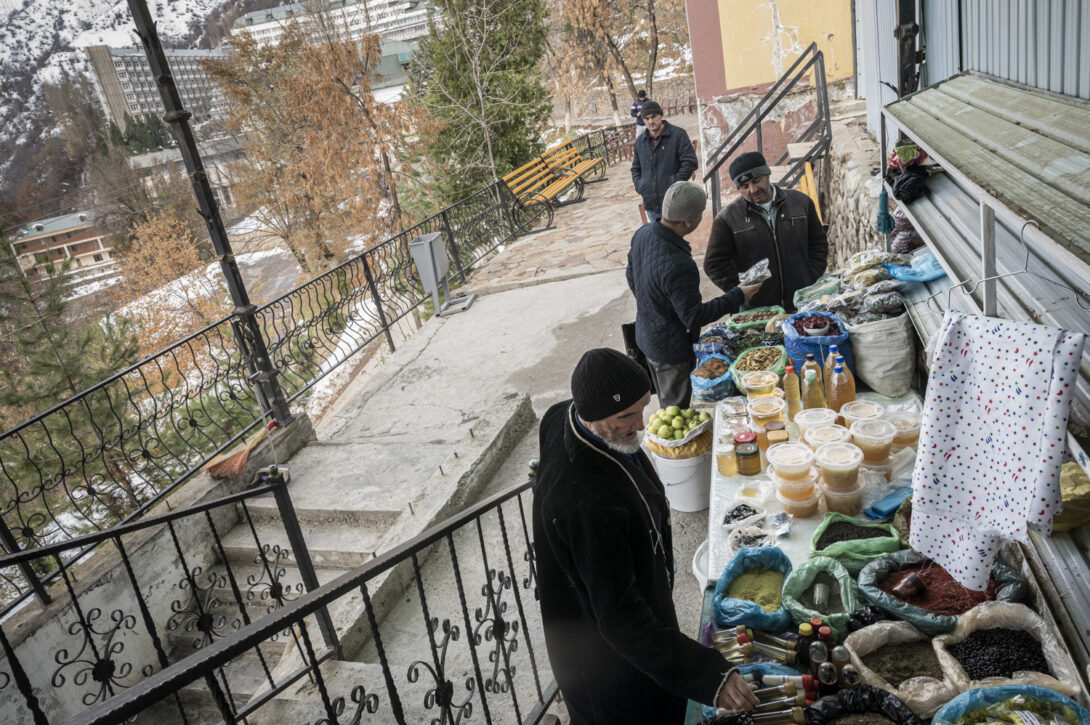 At the exit of the hammam, a vendor has set up a table with various products sought after by residents, such as infusions of mountain plants, honey, spices or apples. In the distance, you can see the monumental structures of the sanatorium. 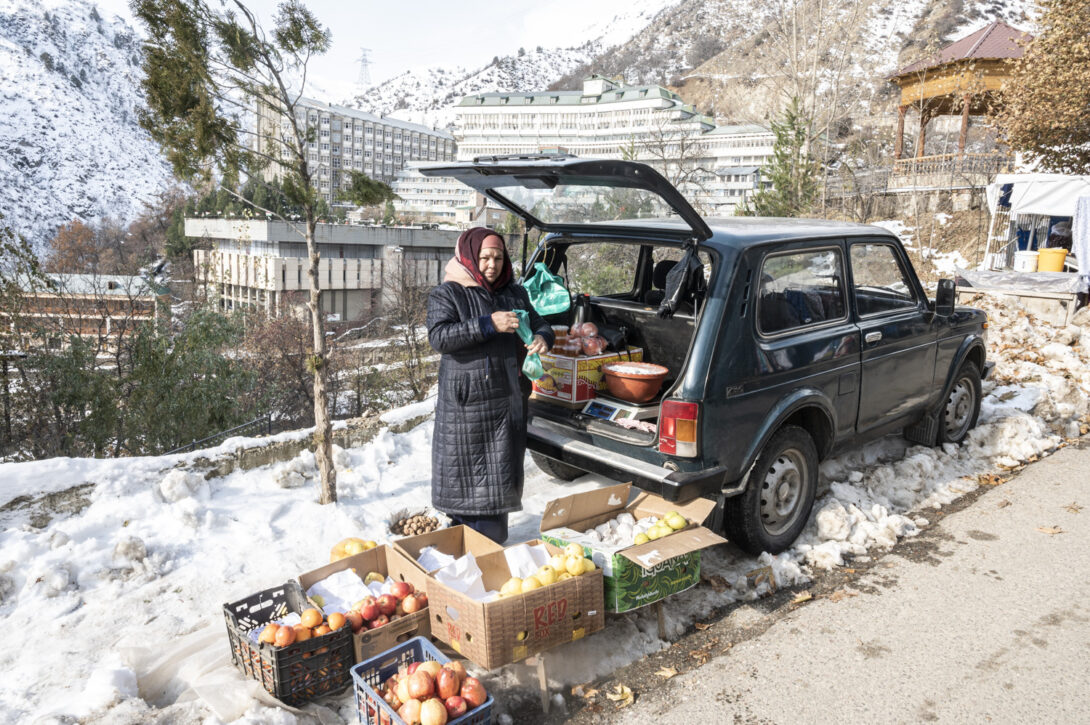 A resident returns to the sanatorium after taking advantage of the radon steams. He is dressed in a chapan, a traditional Tajik coat, which is both comfortable and also protects him from the cold. 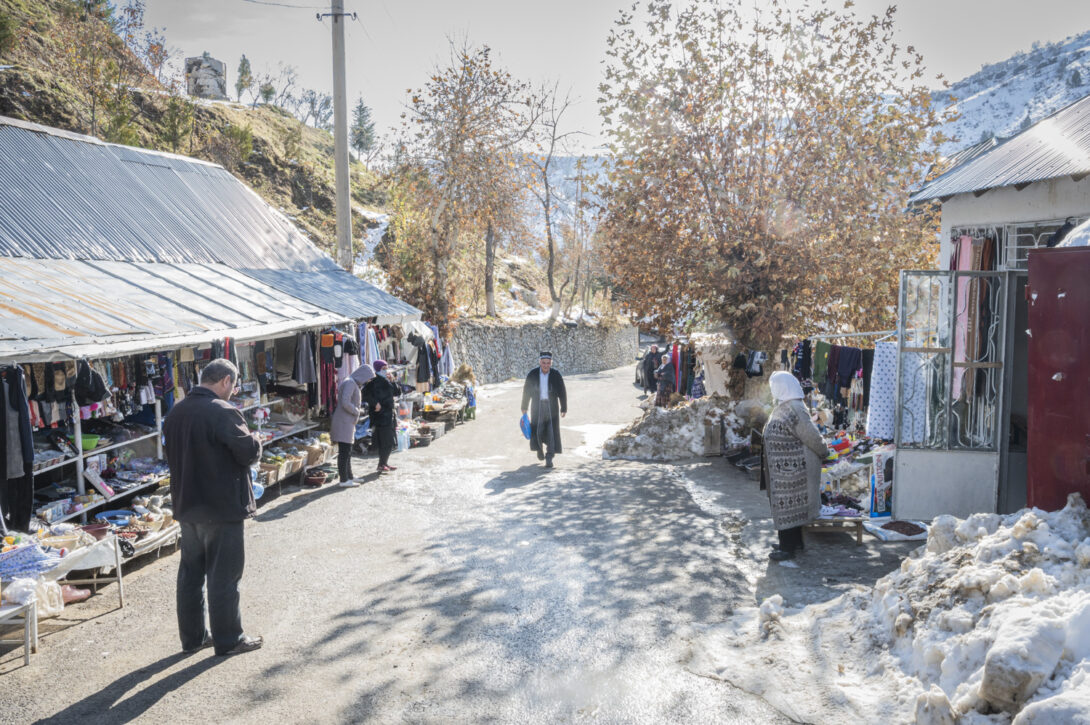 On the road between the hammam located closest to the springs, and the sanatorium, Jamila has set up her fruit and honey stand. Every day, she parks her Lada in the same place, and takes advantage of the constant flow of boarders. 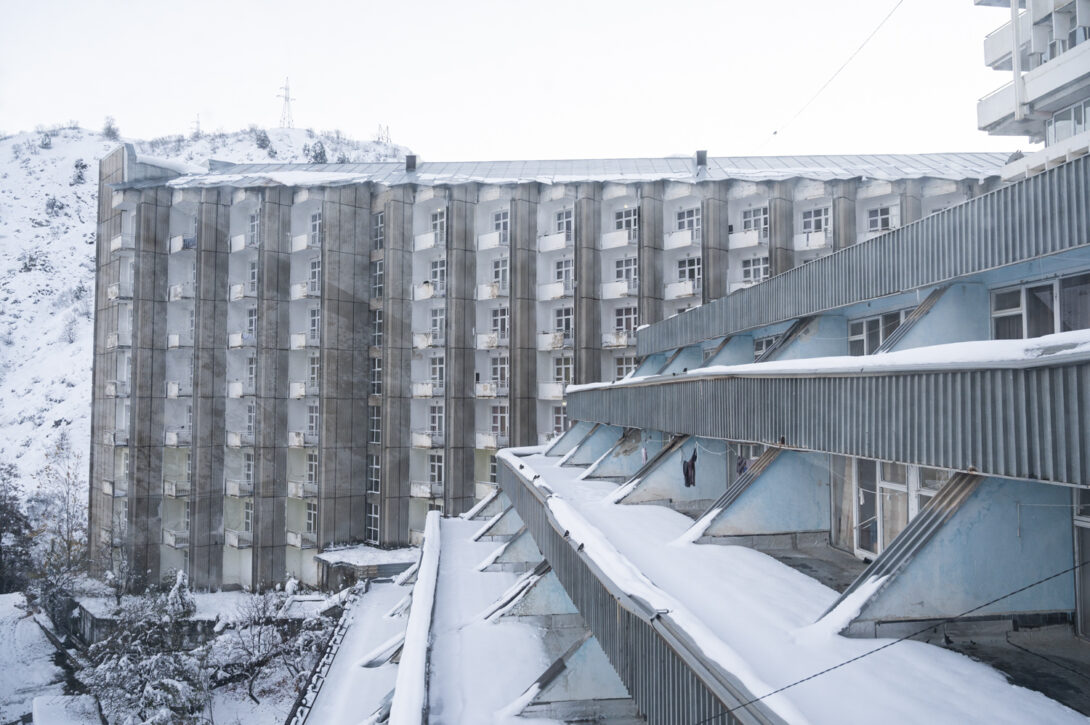 View of a residential block, one hundred meters long, and has nearly 300 rooms on seven levels. As for the rest of the sanatorium, the raw character of the concrete clashes with the surrounding nature. 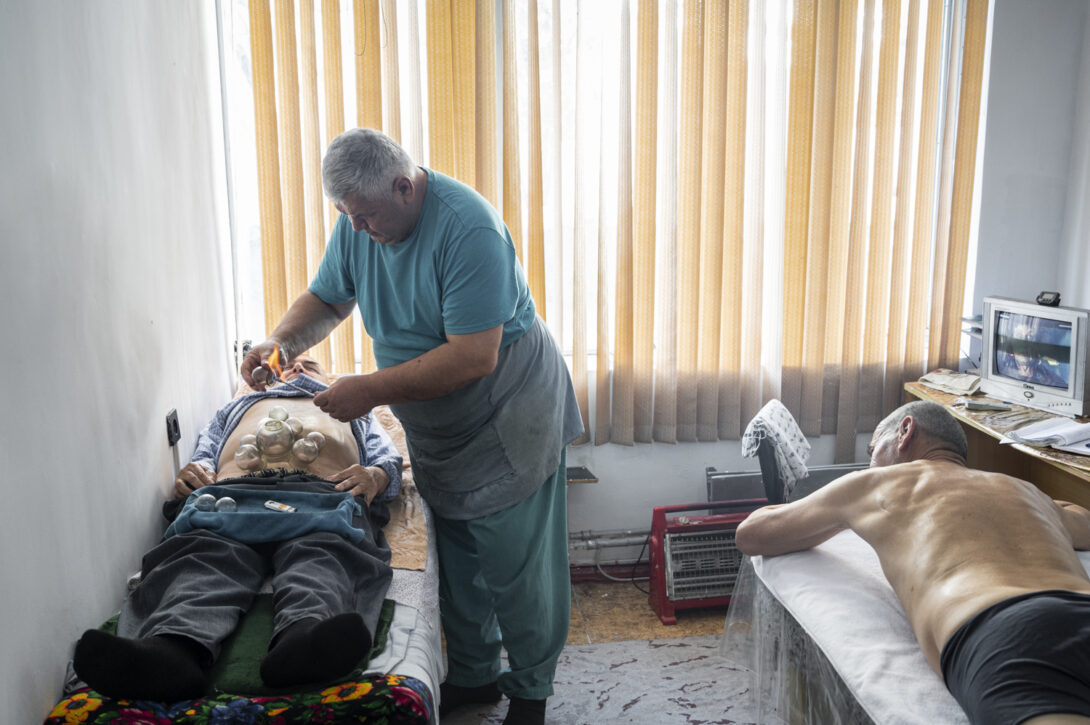 In his massage room, Yussuf also offers different types of treatments, such as cups, which produce a suction cup effect, which stimulates the lower abdomen. Yussuf left Tajikistan after the civil war to go to Russia, where he learned the different techniques of massage and cupping. 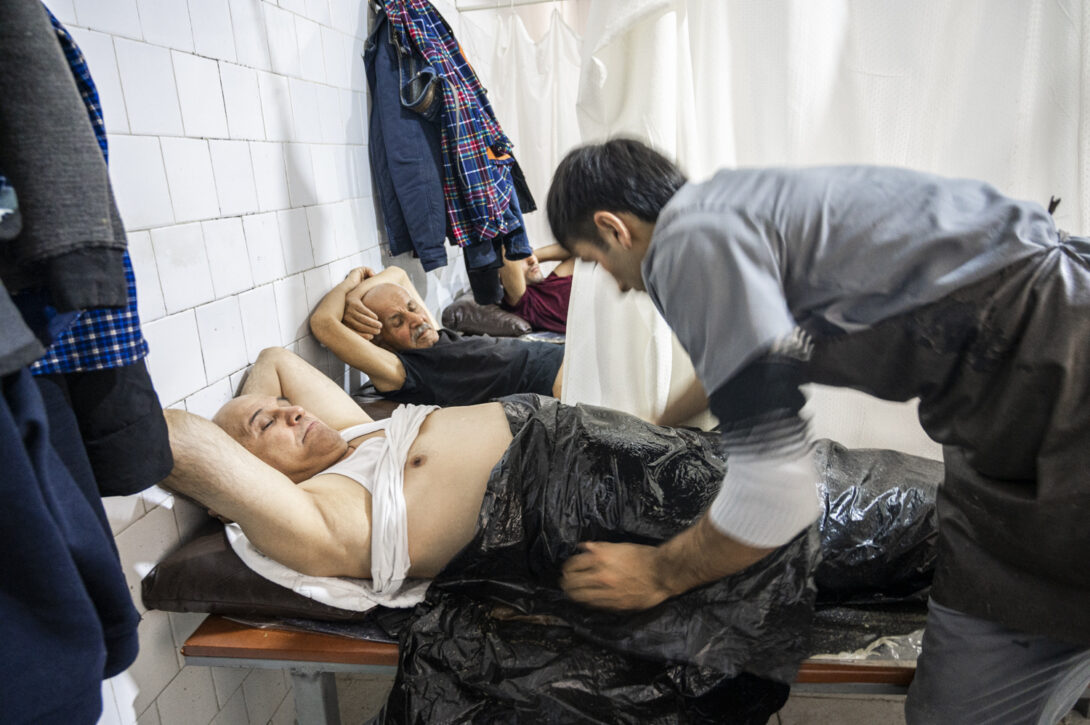 One of the most popular treatments is hot paraffin sheets that are stuck on painful parts, and surrounded by plastic sheets. 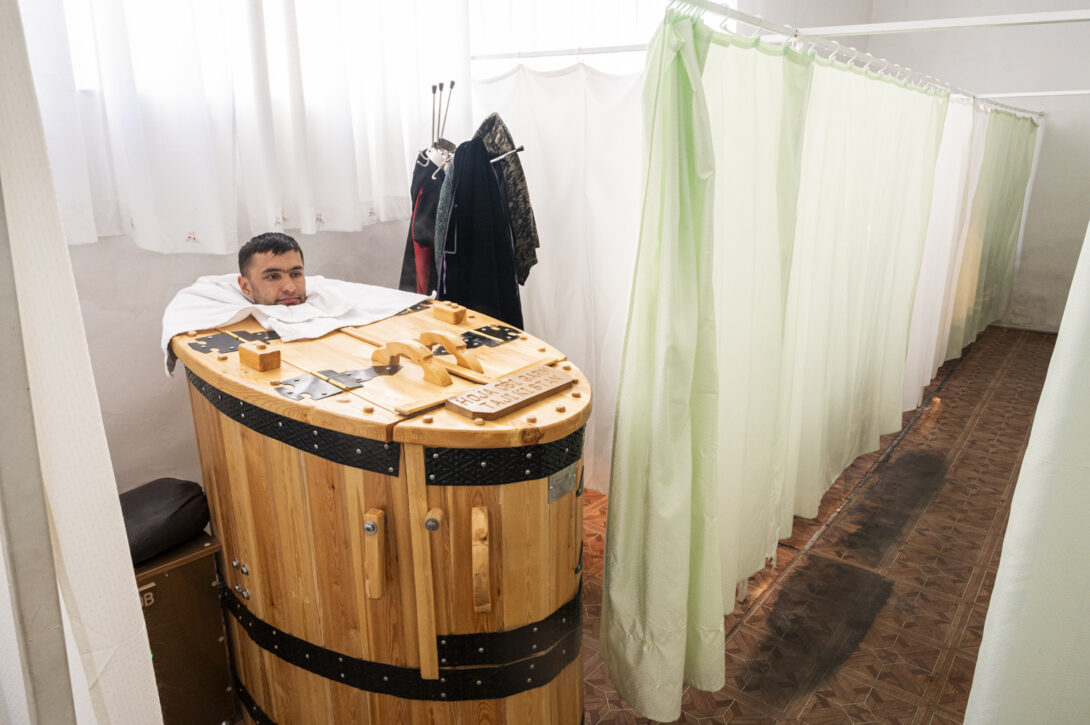 Mohammad enjoys a steam bath in a barrel specially designed for the occasion. Steam can rise up to 50 degrees. 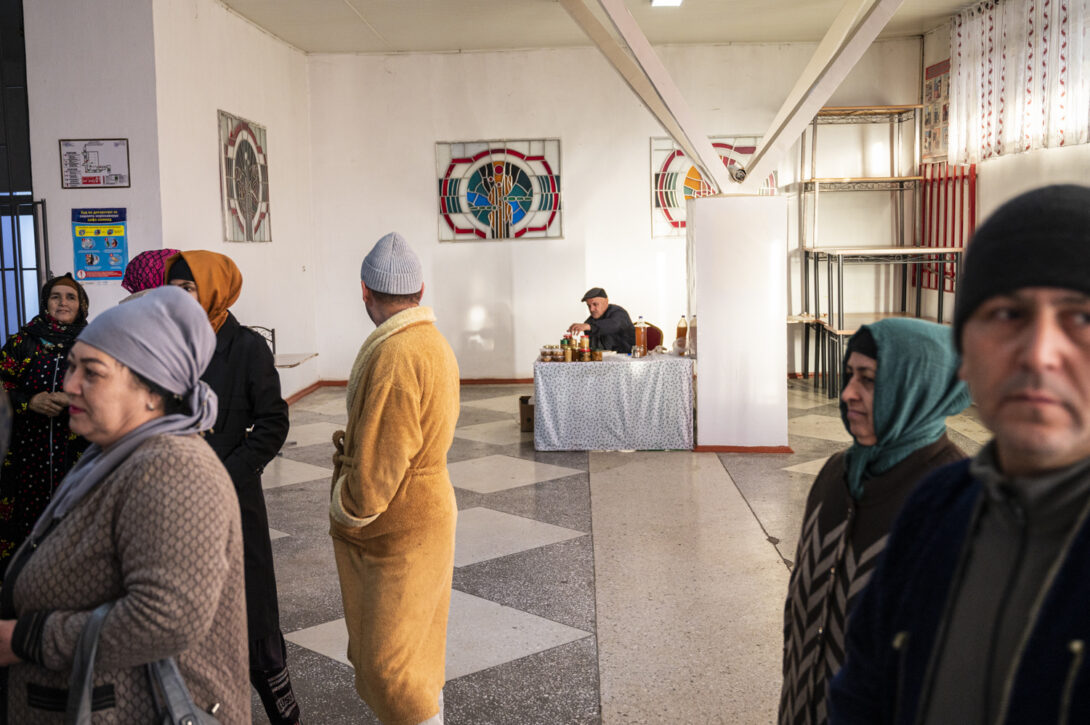 Residents wait before they can enter the canteen, where they will eat their three daily meals. Behind them, a local resident has set up a table to sell his honey. 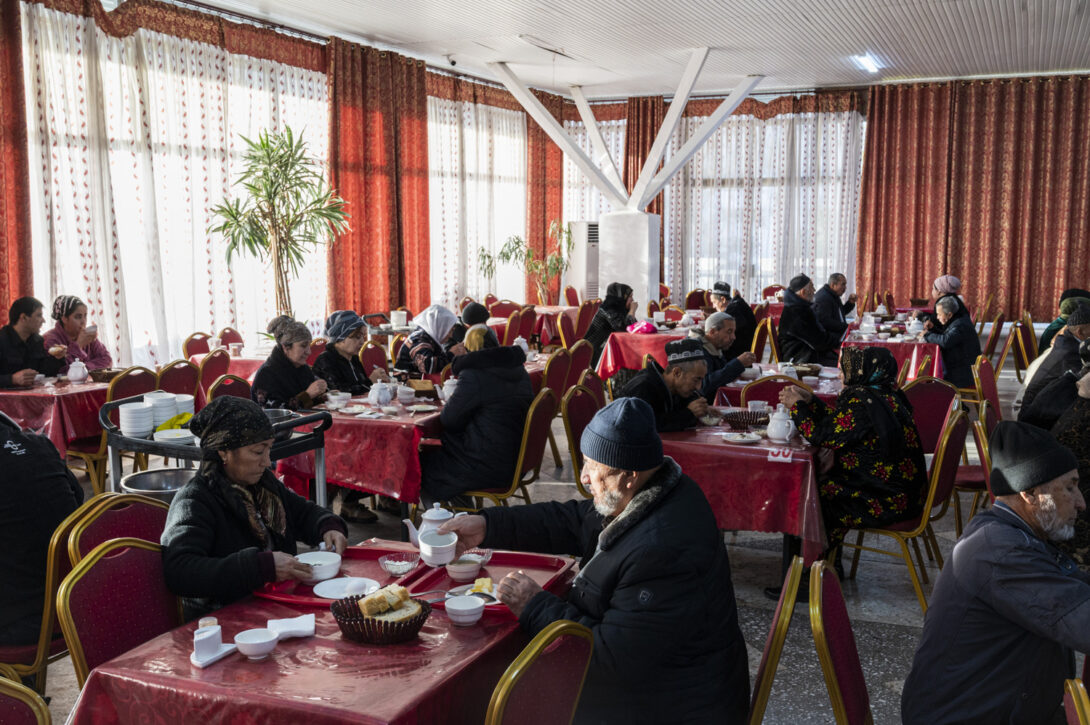 The refectory and the kitchens extend over an area of ​​2,000 square meters, allowing the approximately 500 residents to eat at very specific times. 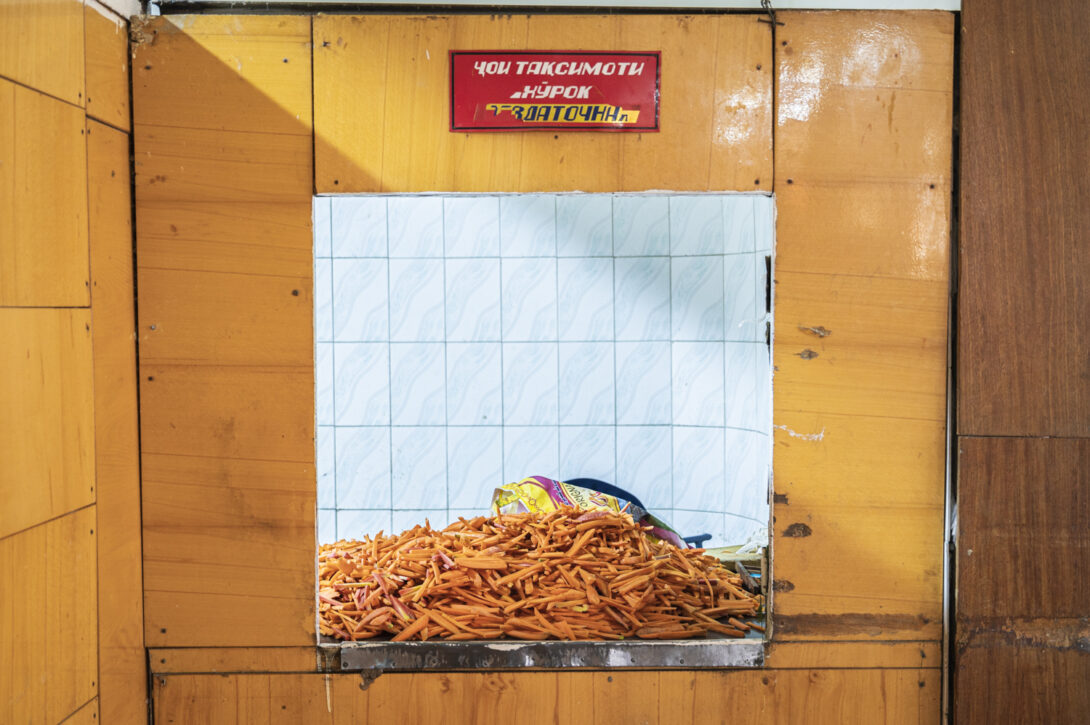 A pile of carrots were peeled and cut up to prepare plov, the official dish of Tajikistan and Uzbekistan, consisting of rice, carrots and mutton (and sometimes chickpeas). 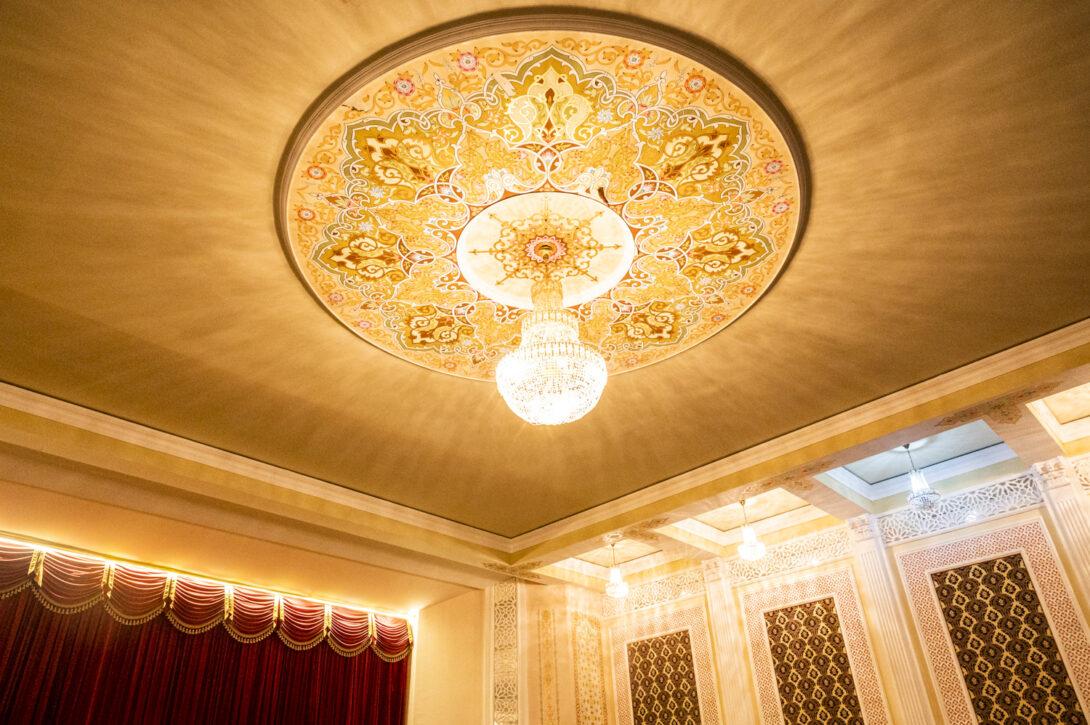 A chandelier illuminates the auditorium located below the refectory. The auditorium and refectory were completed in 1988, shortly before the decline of the Soviet period of the sanatorium. 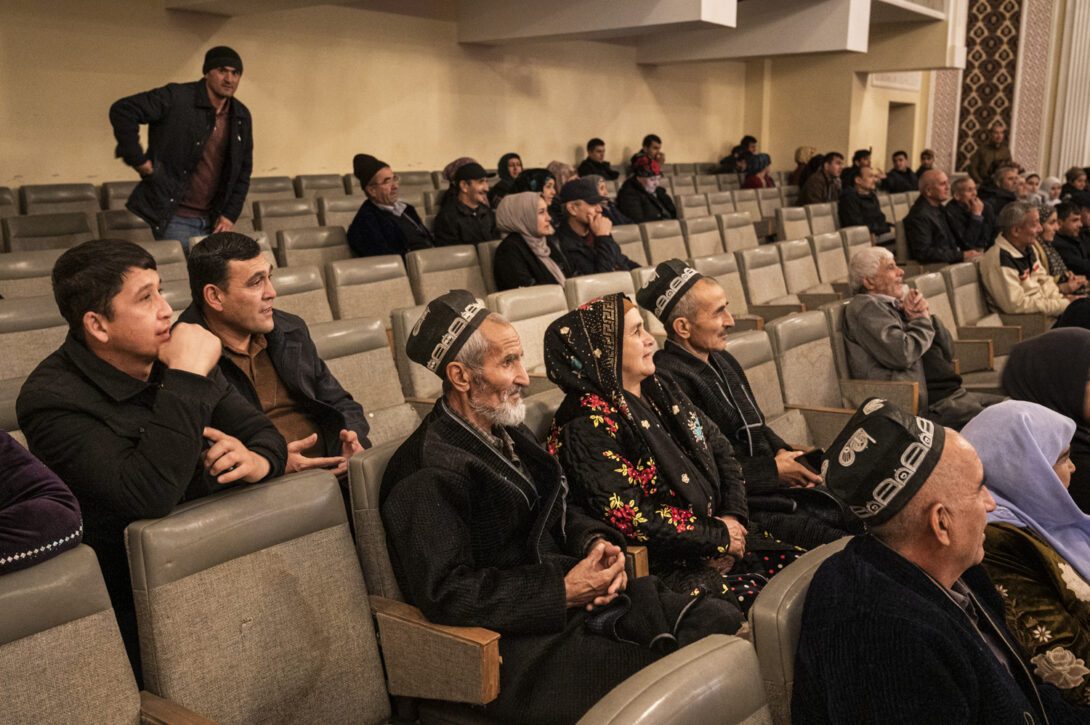 Every evening, many residents come to attend the concerts and games organized on the stage of the auditorium. 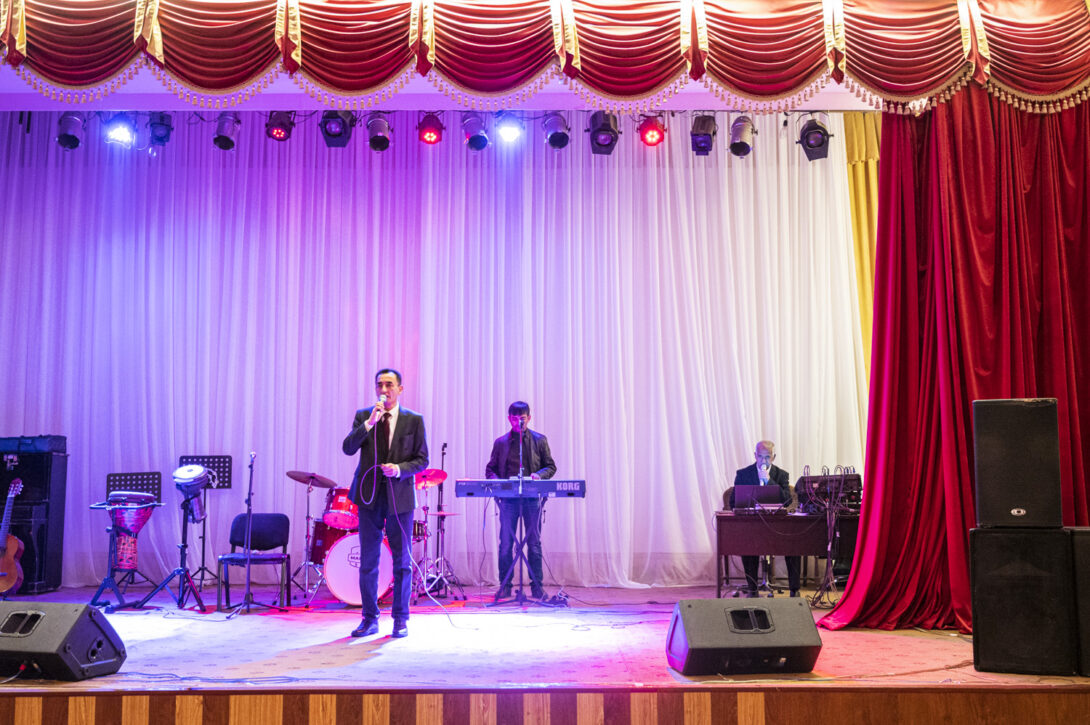 Akram, one of the managers of the sanatorium, is also an experienced singer and performs classic Tajik music or more recent hits. 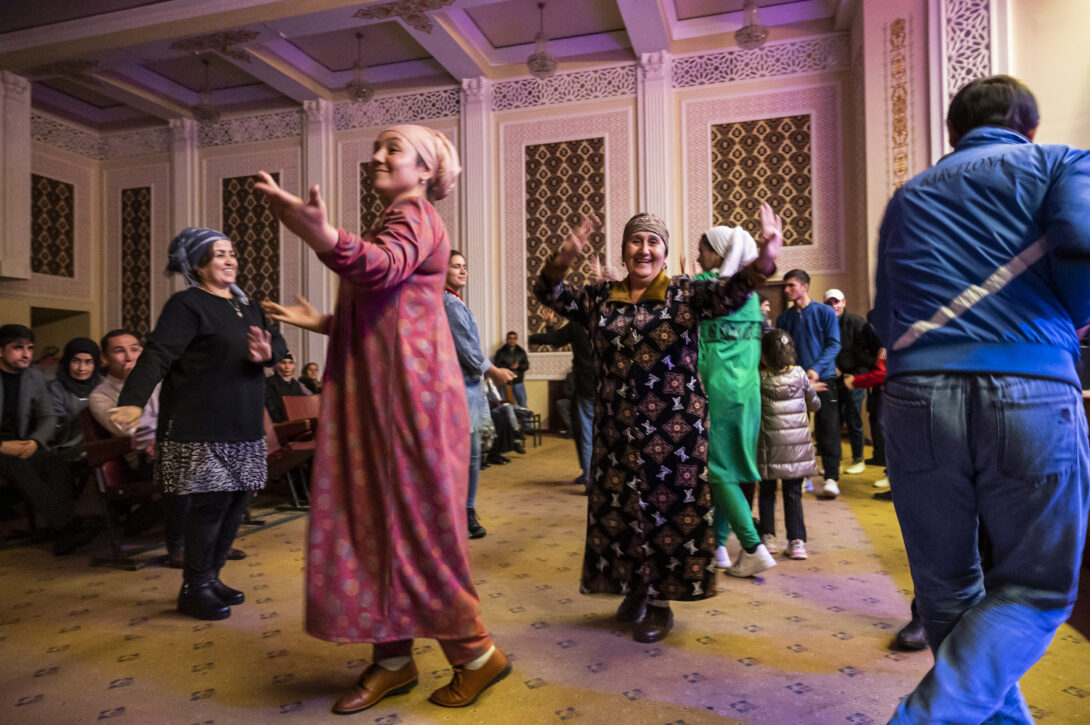 Residents dance to Tajik music, with traditional dances, which involve raising their hands in the air. During the dances, men and women are often in single-sex groups. 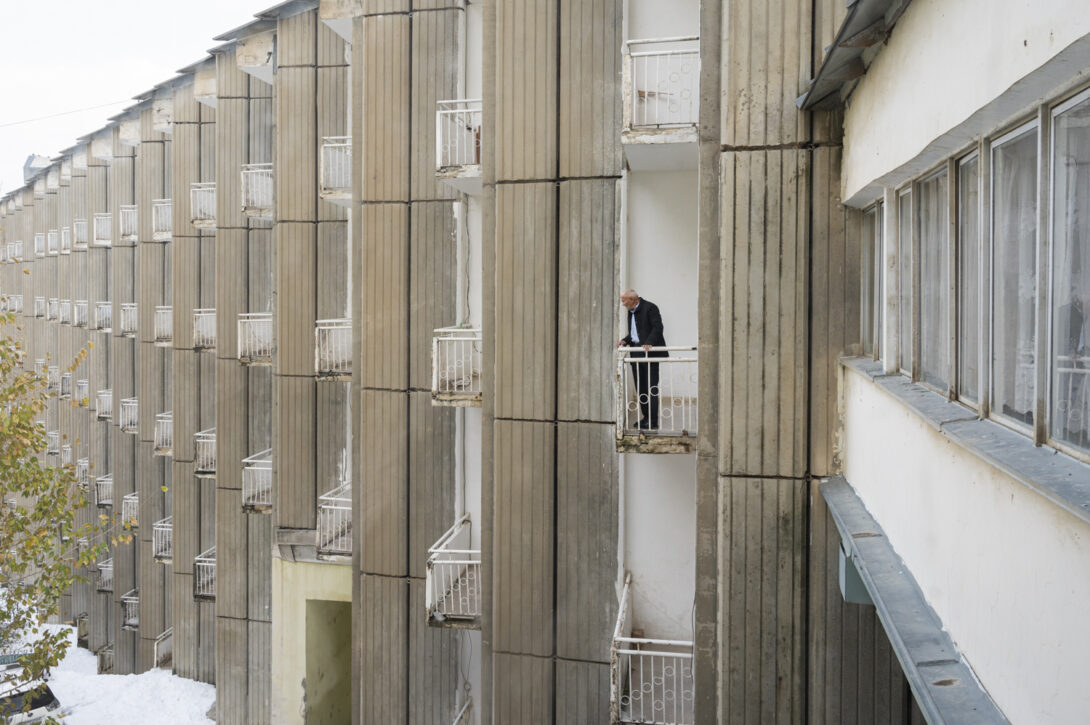 A resident takes in the view from a balcony and prepares for another day at Khoja Obi Garm Sanatorium.